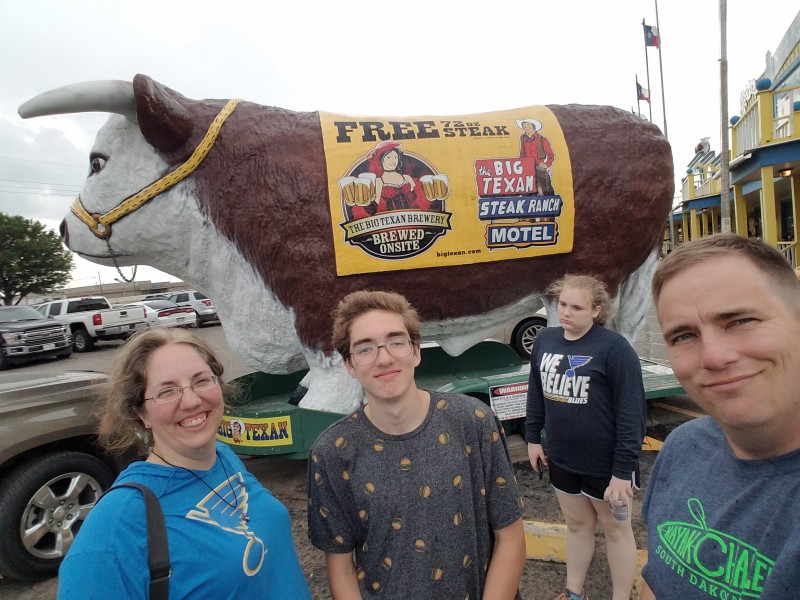 Our first full day of vacation started with Corvin, Danelle, and I getting up early. Sonora slept in as we crept down for a preview of the hotel’s included breakfast before heading to a bike path in downtown Tulsa. This was Corvin’s and my first state to record in our 48 wheels trip to unicycle all lower 48 states for an hour.we were all super excited and Danelle was there to record it. I’ll leave a few photos here, but you can check out our official log of Oklahoma. 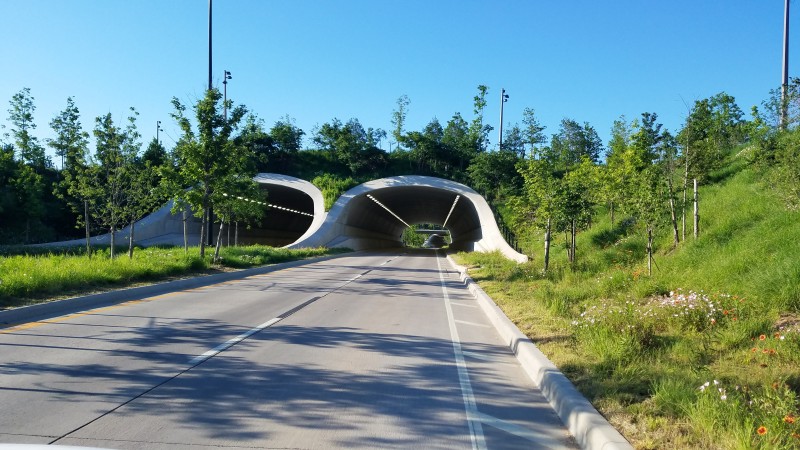 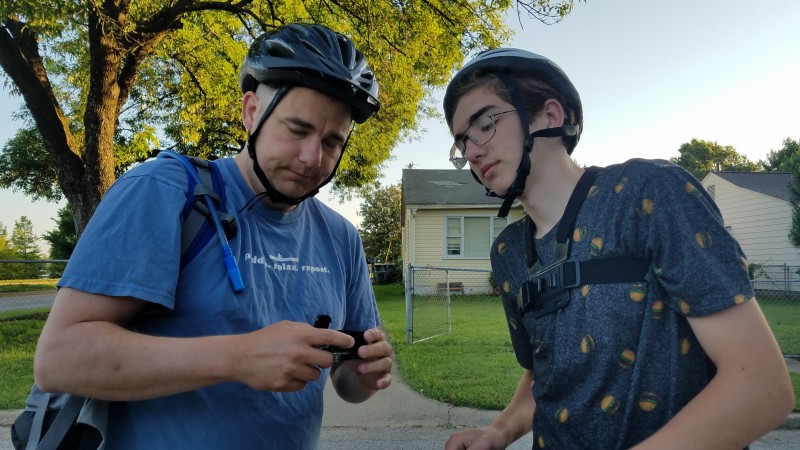 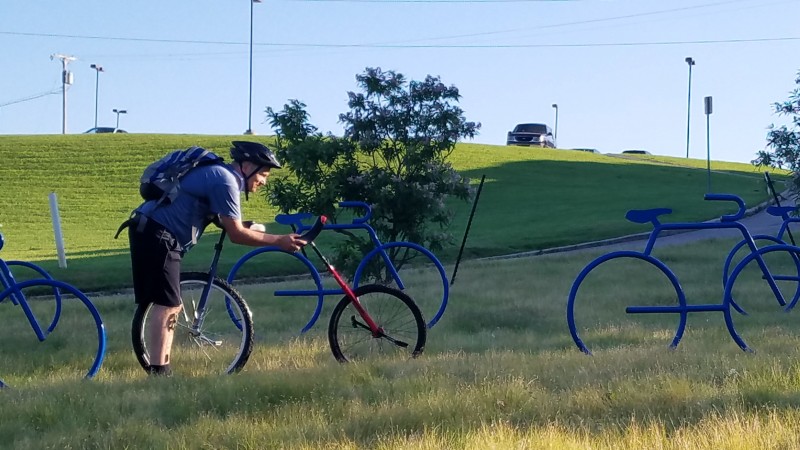 After riding, we went back to the hotel to shower and pack for the day. After we cleaned up, the four of us went down for breakfast (some of us for a second time). With food out of the way, it was time to drive! One of the drawbacks of seeing so many states is the requirement to drive as much as we did.

We drove through some threatening weather. Corvin and were worried about how we would get our uni-cycling done, but it ended up not being an issue. We drove through and out the other side of the storm. We got to Texas a bit earlier than expected and decided to have an early dinner before uni-cycling. We at at The Big Texan steakhouse. I’ve read about this restaurant and wanted to try it out for myself. It was going to be our big expense for the day, but we decided it would be worth it. 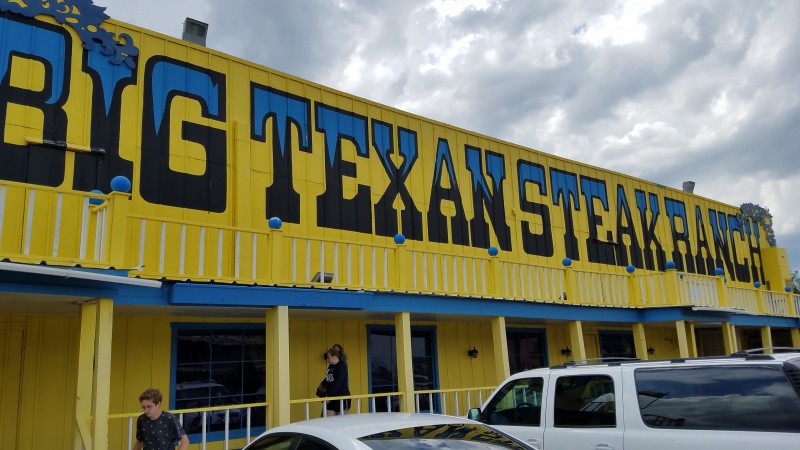 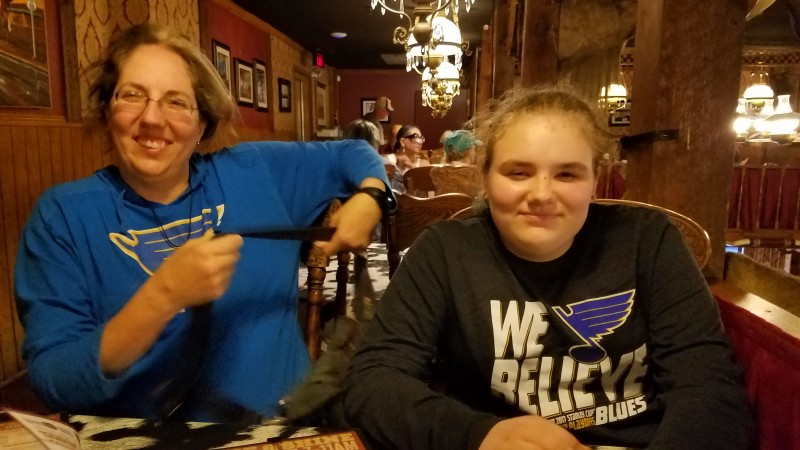 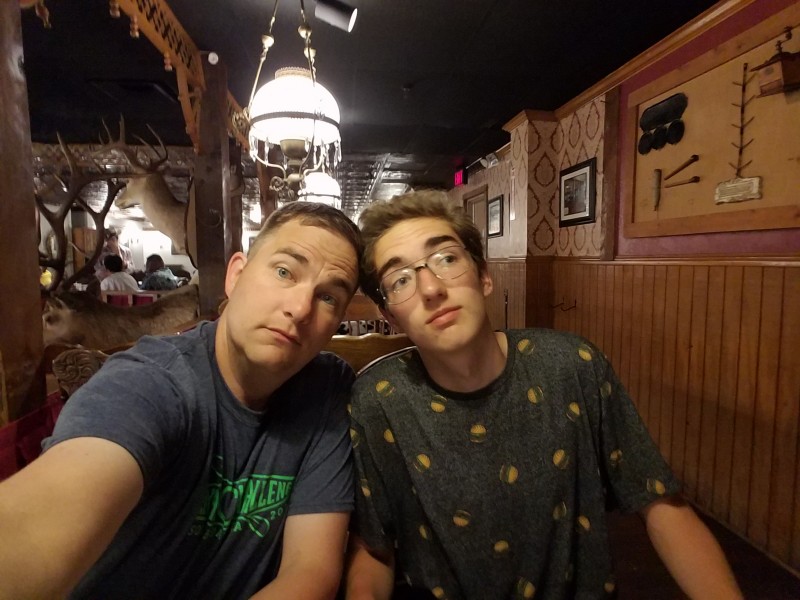 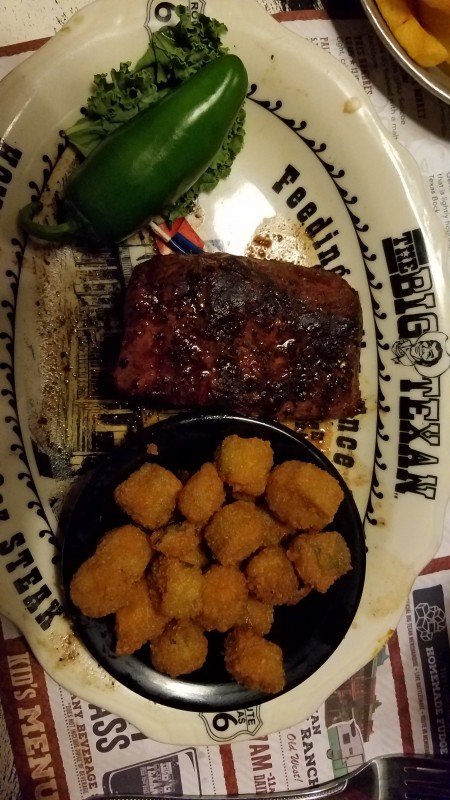 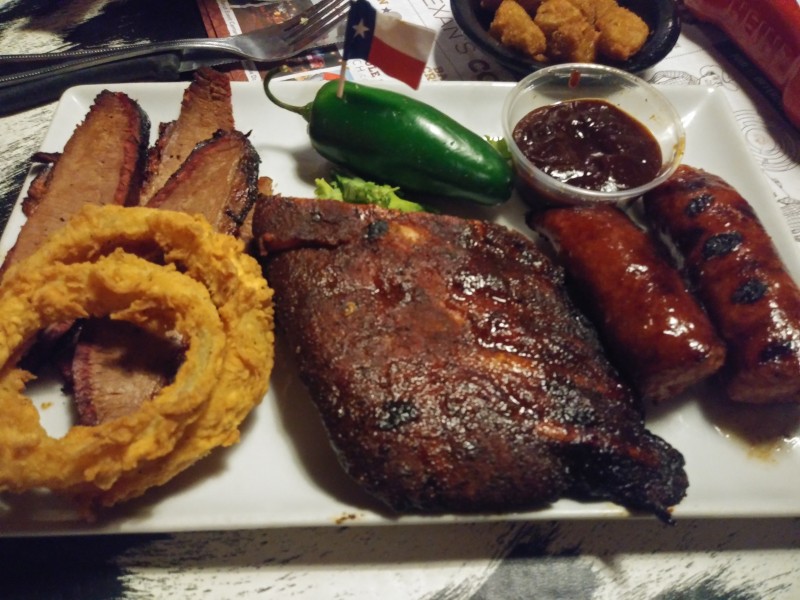 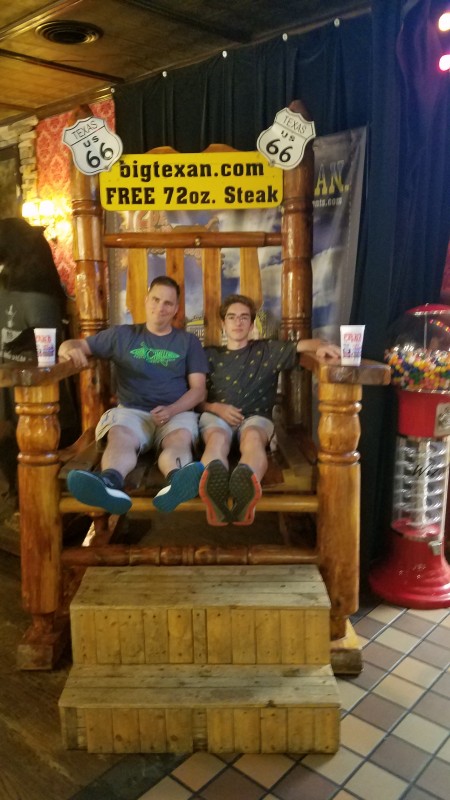 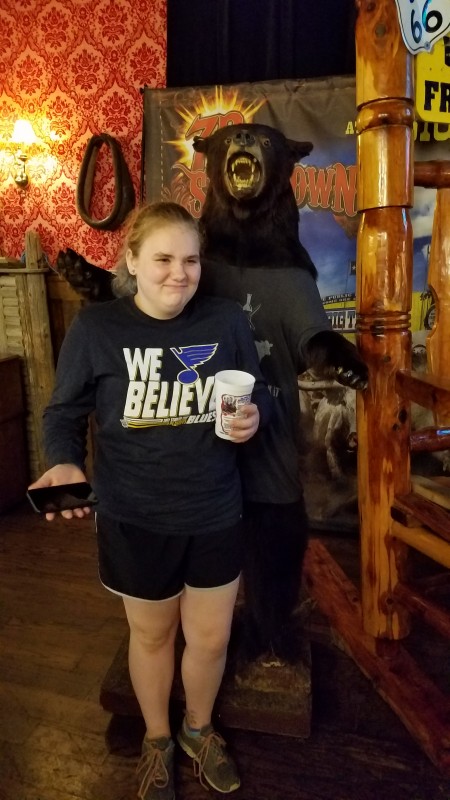 The food and atmosphere were both great. Corvin was just dumb enough to try the jalapeno pepper on his plate. He figured a tiny bite wouldn’t be that much and drank a ton trying to cool his tongue off.

With dinner out of the way, we had the rest of the afternoon/evening to visit Palo Duro Canyon. This is where Corvin and I would log our second unicycle state. Immediately upon entering the park, we were all taken away with the beauty of the canyon.

While Corvin and I were off riding for our hour, Danelle and Sonora took a scenic hike. 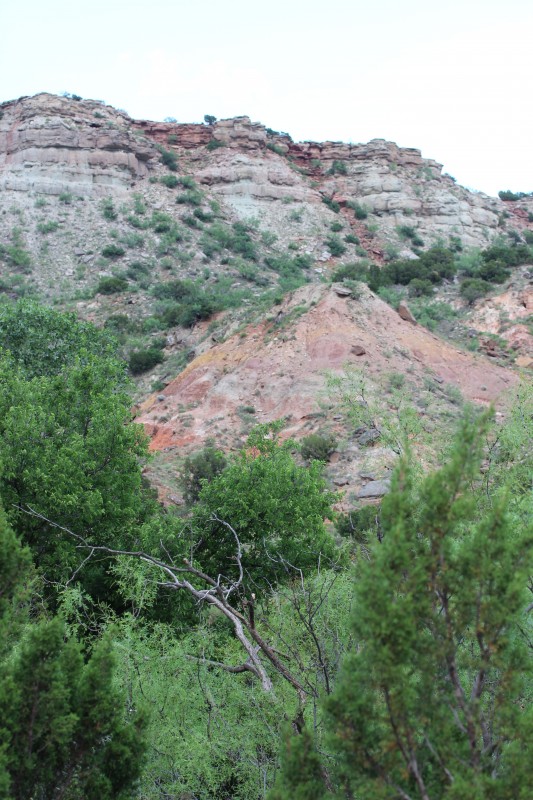 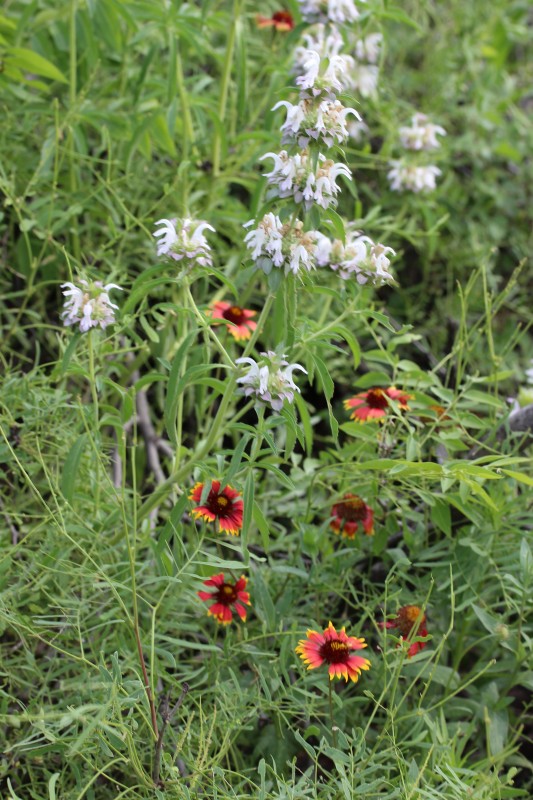 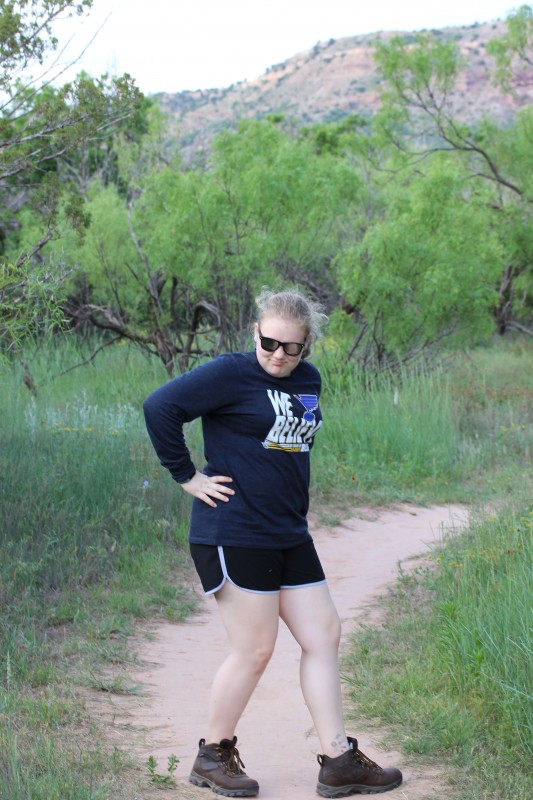 Eventually, we all met back at the van after our various activities. We wanted to stay longer and explore the park, but it was getting late, there was an event going on that blocked out half the park, and it appeared a thunderstorm was moving in.

We decided to drive out to the town of Amarillo and catch Highway I-40 west a bit before stopping for the night. Before we were half way back to Amarillo, the rain started. Danelle wondered if there could be flash flooding and asked me to stop at a nearby gas station. The land around was very flat and we didn’t know local conditions. When we stopped we got hailed on for a bit and I was glad I wasn’t driving during that. I got impatient and continued on into town.

When we got into town, things got real interesting. The whole town was not designed for this type of storm. Most of the roads were covered in water a few inches deep and moving fairly quickly. I kept thinking if I could just get to the north side of town and the interstate, we could get out of there and to safety. I followed some cars through some deep water in the van and turned around at other intersections where I didn’t know how deep the water was.

At one point, we stopped and hung out at a local repair shop in their parking lot because I thought the water was too deep to cross. Eventually I was too tempted after seeing so many other vehicles successfully cross the intersection and decided to go for it. I followed another vehicle into deep water. We did make it, but we had a wave that would have swamped a sedan. Our license plate was bent from the water coming against the grill of the van. I never want to experience a flash flood again like this. And if you didn’t think I learned my lesson after reading this, going through the very deep water caused a micro crack in my exhaust header of the van. When we got back, the repair bill was $1700 to get it fixed!

Watch the video we took of the flooding and stay out of flooded roads!