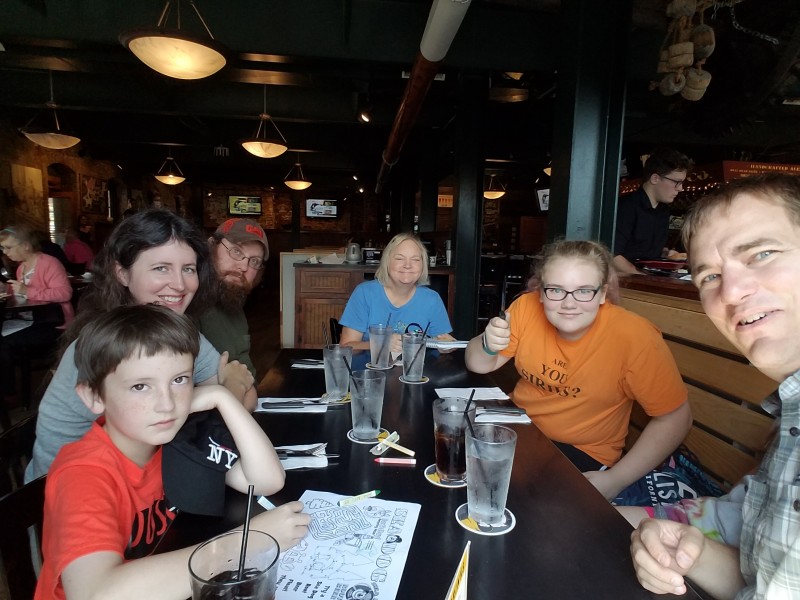 Colleen invited us to stay in Maine two days so she could show us around where she and the kids live. We were excited to see some of the highlights of Maine. Mom and I stayed in a motel while Sonora spent two nights with Michaela. The next morning driving over to Colleen’s house, we stopped to check out a few roadside attractions that we drove past the night before. 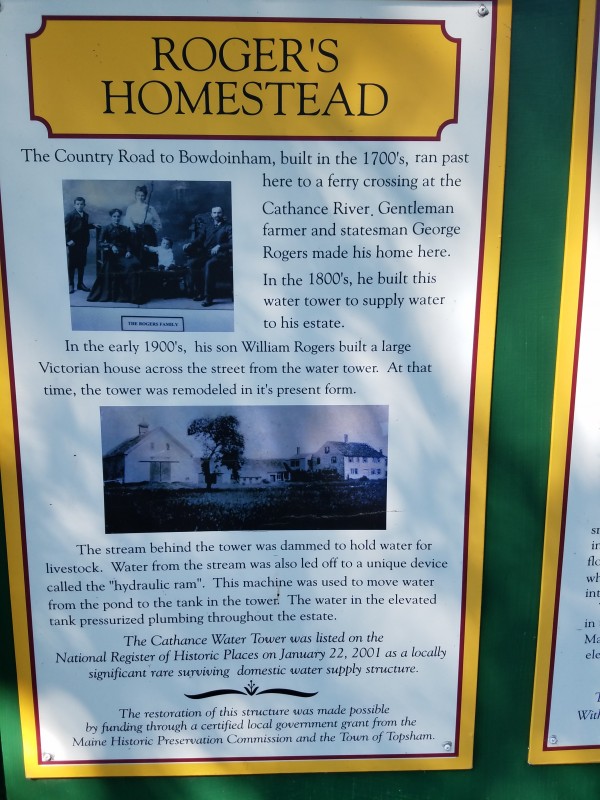 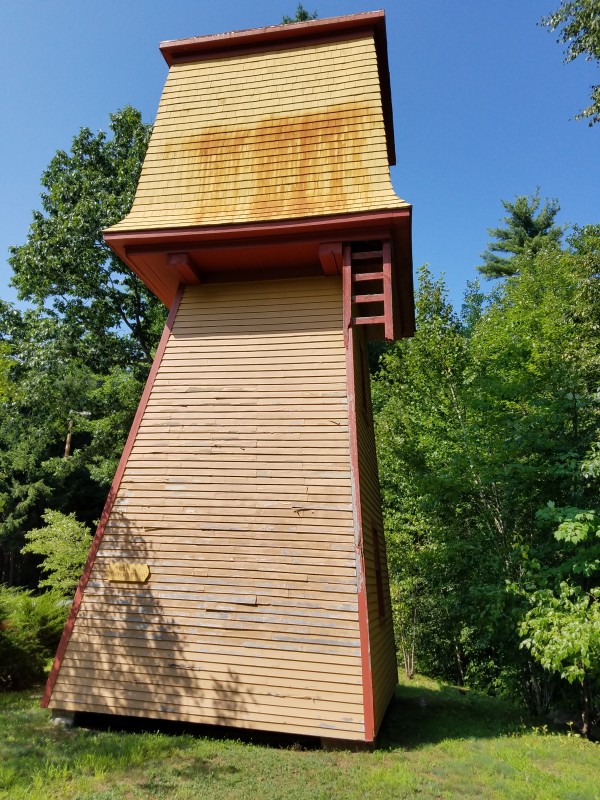 We spent the morning at their house hanging out. I managed to turn several horses in the display around and get a photo for Hannah. (Its a running joke with my sister to send her pictures of horse butts) 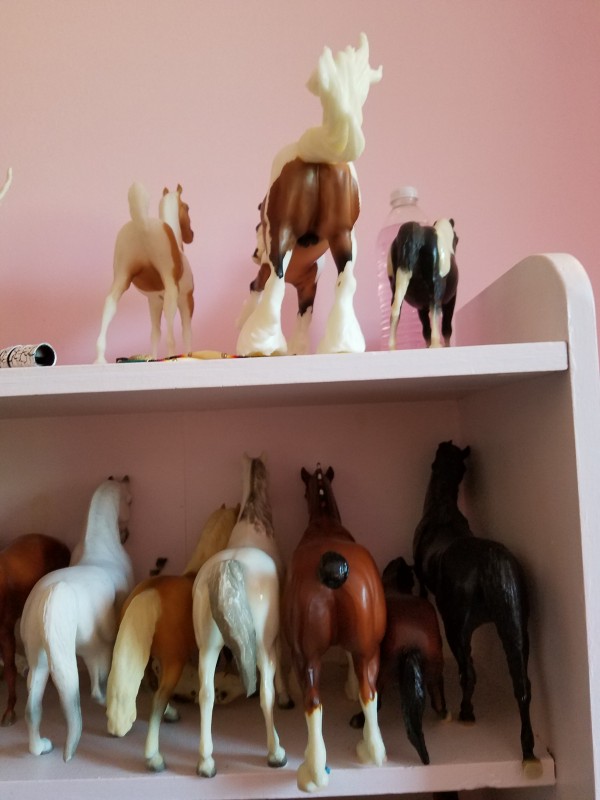 We decided to go out to lunch before our day’s activity. We went to Sea Dog brewing company. Mom and I ate there the night before but didn’t mind going back as it was quite good!

Eventually, we went out to “Land’s End”. Its a shop and the end of a long row with a beach. We hung out on the beach for a long time and walked all through the shop. 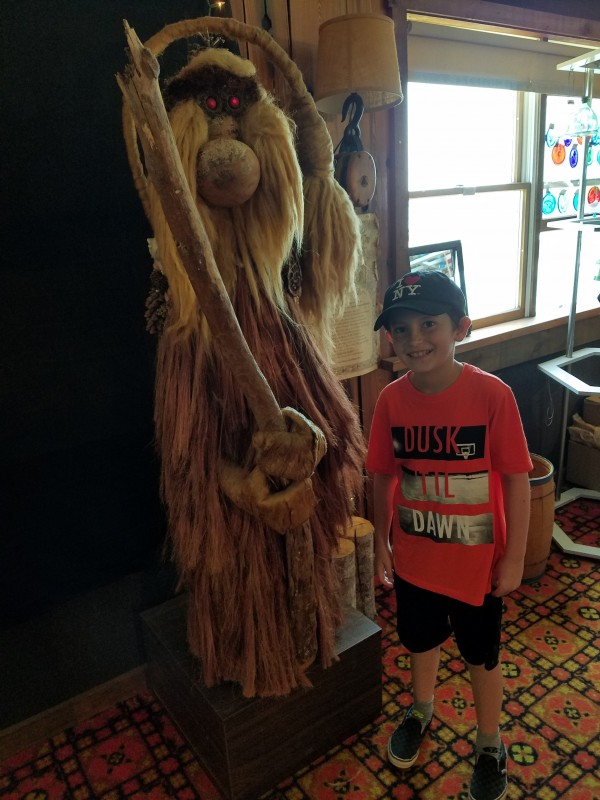 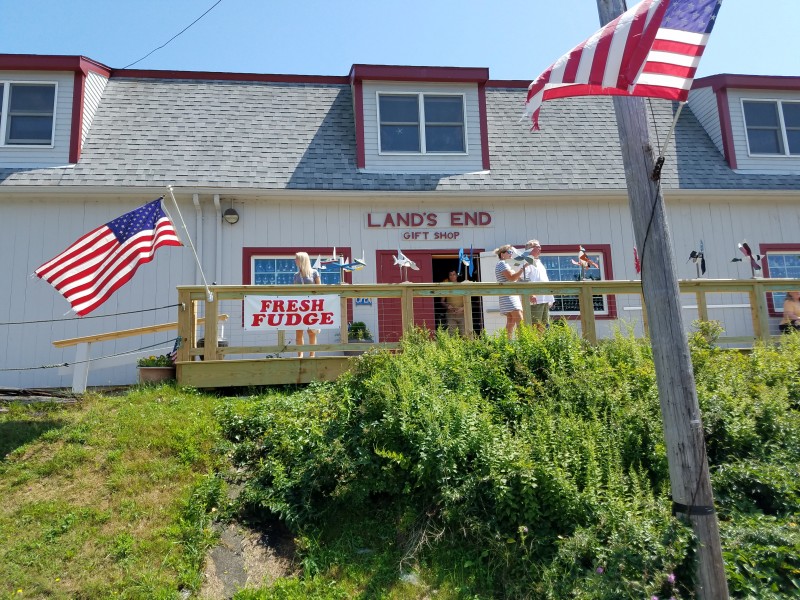 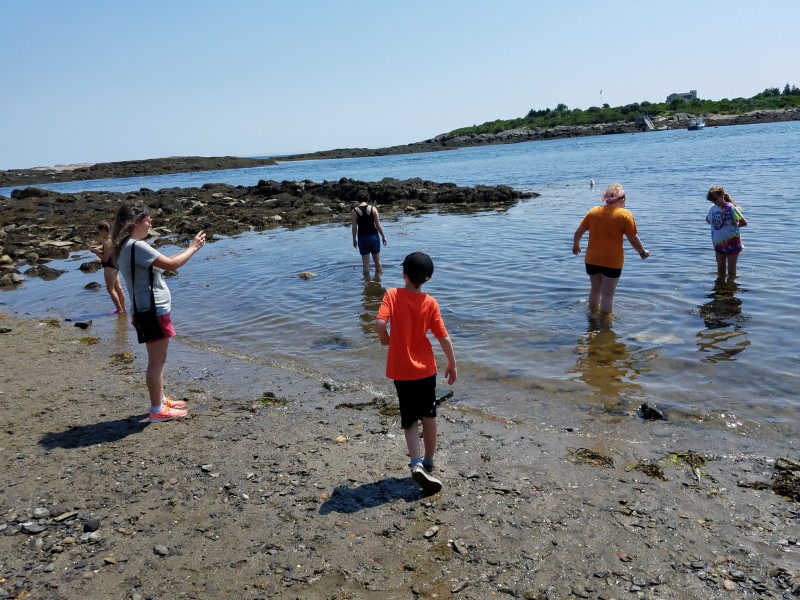 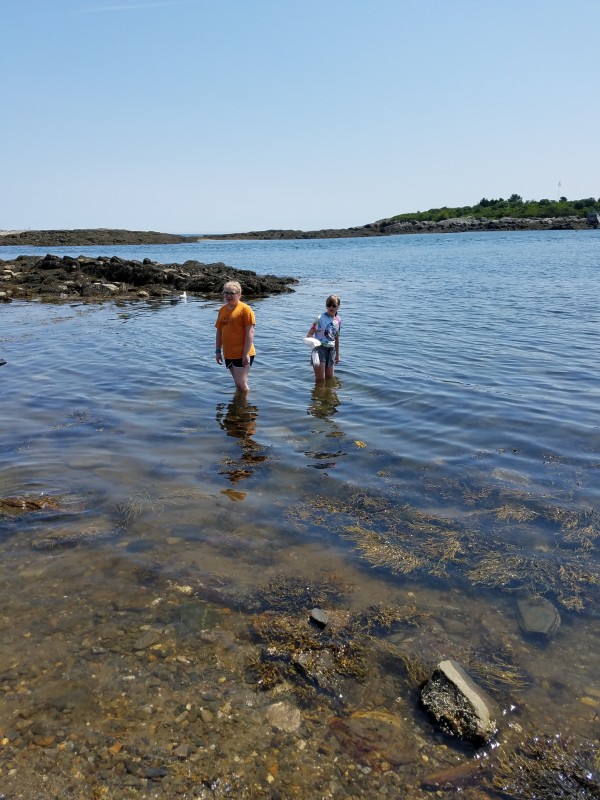 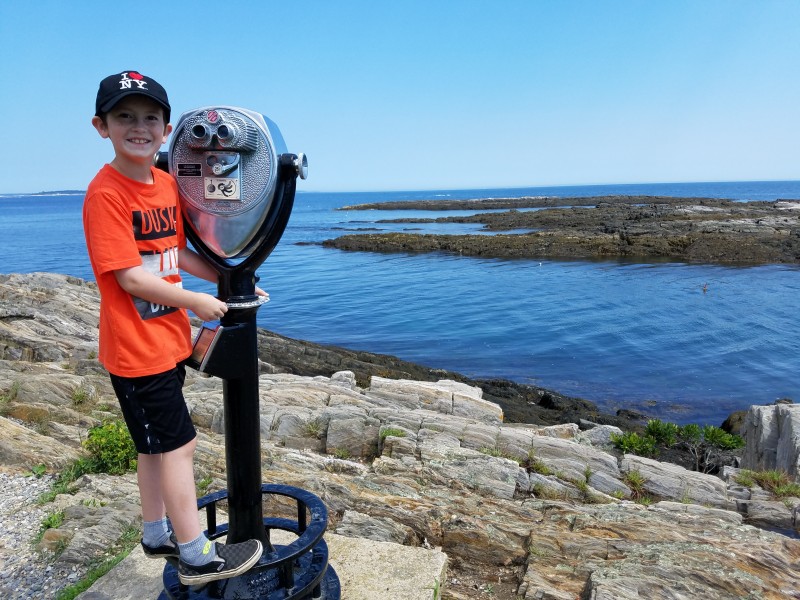 One interesting note is a product called Moxie. Its a regional soft drink that has a cult following. Cult because of its bitter taste. I purchased one. Sonora and I could each only manage a single sip before handing it away to Michaela to finish. I wished I had a steel brush to clean my tongue of the aftertaste!

We had a great time. Eventually, we finished up and headed back to Topsham. For dinner, we were invited to Pete and Mary Beth’s house (Colleen’s parents). They showed us around their amazing house. It is set right on the edge of public land that won’t ever be developed. This gives them a giant space to explore and hike in year round. On the edge of their property, Pete built a magnificent tree house for Michaela and Sean to play in! I’m impressed! 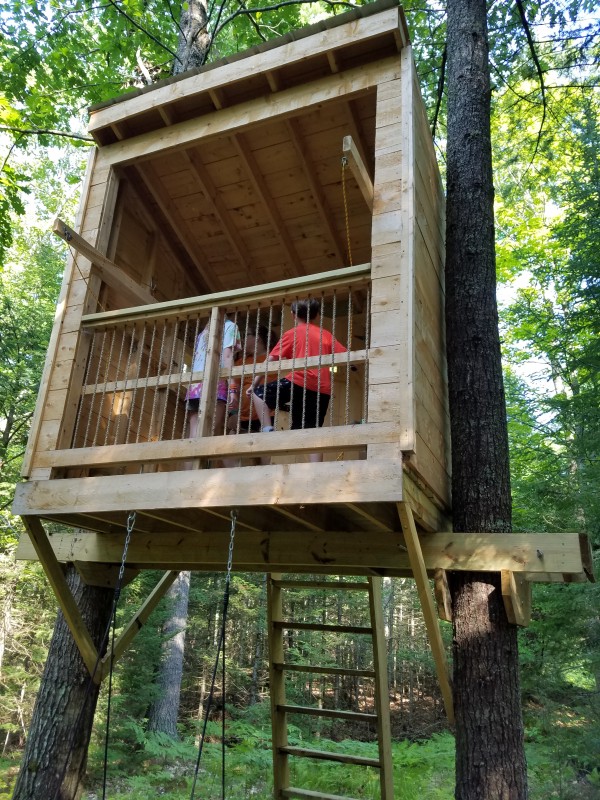 For the dinner that they hosted, Pete did to me what I do to others, over served my drink. He offered whiskey and I accepted, but he poured the glass nearly full. I didn’t finish it, but it was a laughing point for the meal. It was a great night enjoying their hospitality and seeing their genuine love of their grand kids being home safe!

The second day was a day at the beach. Pete and Mary Beth gave us two different tents and some chairs to use since we planned to be there all day. We packed a cooler with lunch and drinks and headed out together in my van. Once we got set up, we took turns hanging out at the tents to watch our stuff.

Sonora with our two tents. 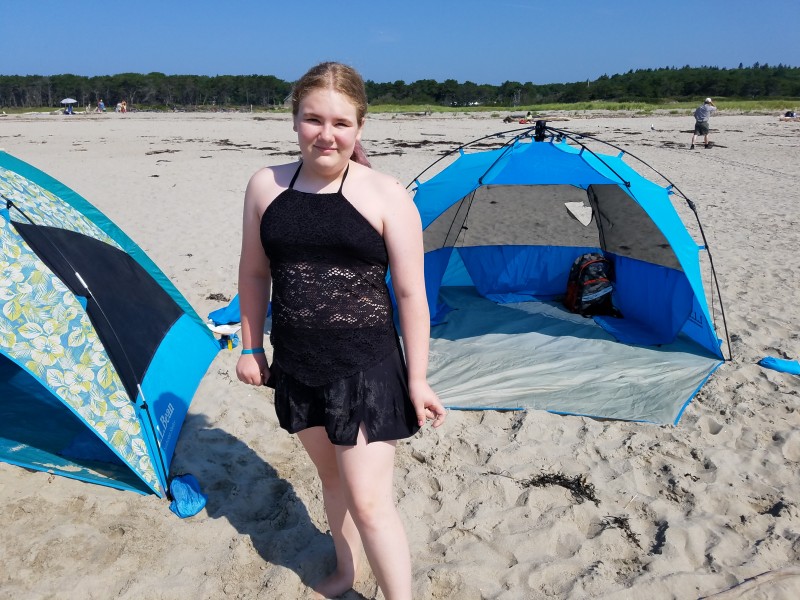 Looking down the beach. 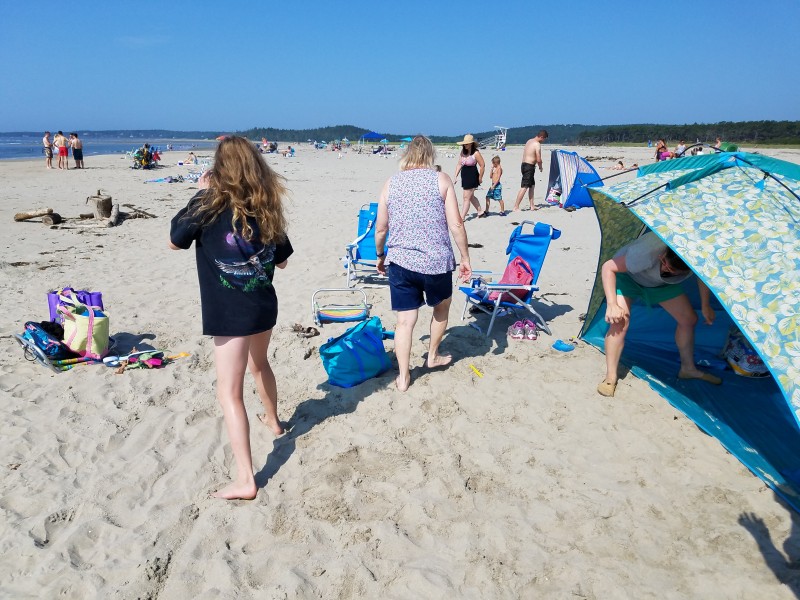 Looking out at the water 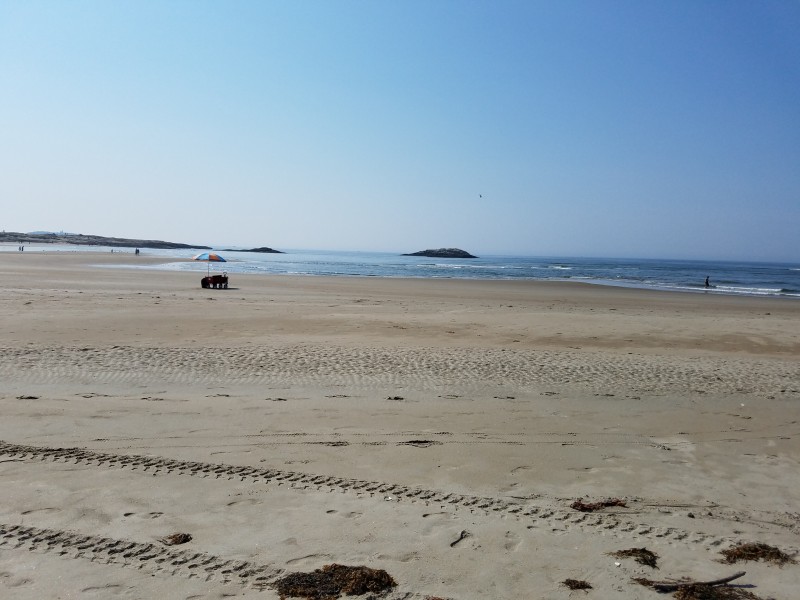 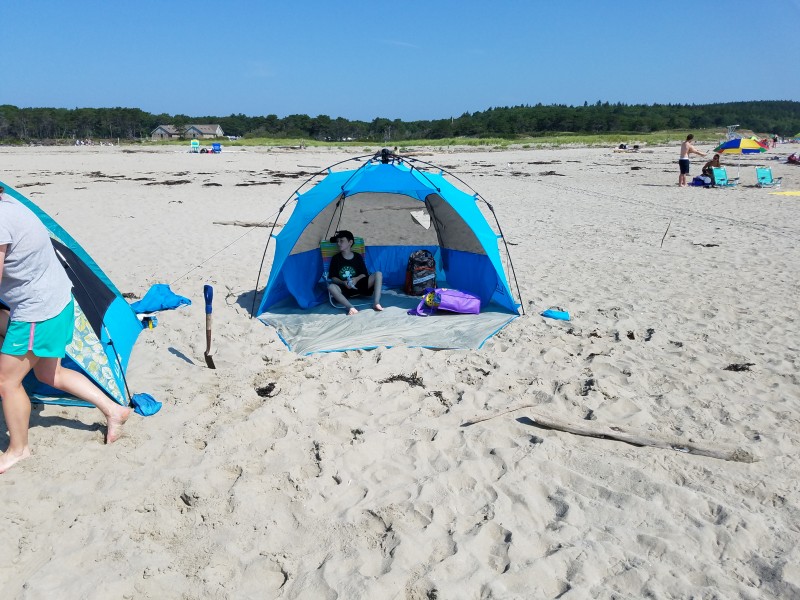 I missed Danelle, so I left her a note (that I took a photo of and texted to her) in the sand. 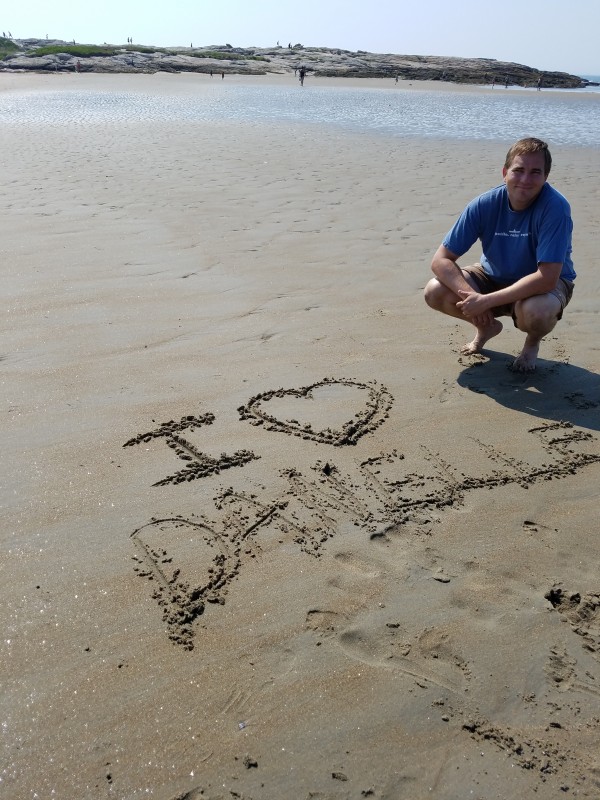 Mom may have borrowed my message for dad 🙂 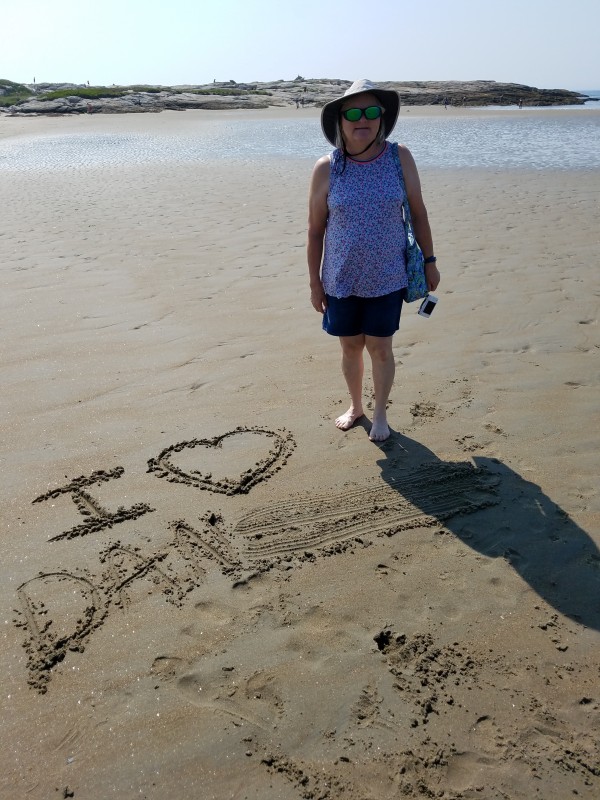 Its an old BAK (Biking Across Kansas) joke that Holly would write “Giggles was here” at the SAG stops. We added it to the sand and sent her a photo. 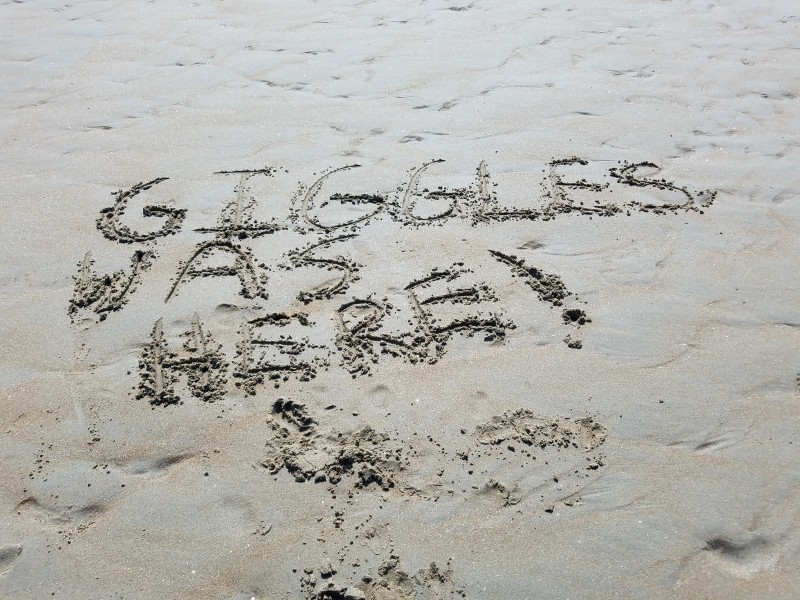 The last set of photos from our day at the beach came from an outing with mom. Before we left, dad told me to push mom a bit out of her comfort zone, that she would do nearly anything. So I took him up on it and took mom for a hike over to see a large rock outcropping at the beach.

This is the view from the top of the rock. The specks on the beach is where our stuff is set up. 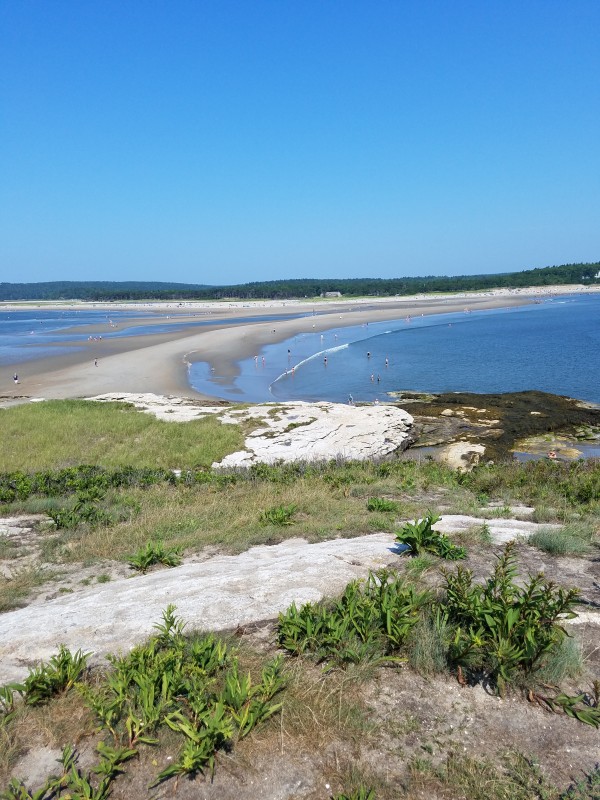 Mom at the top of the rock. 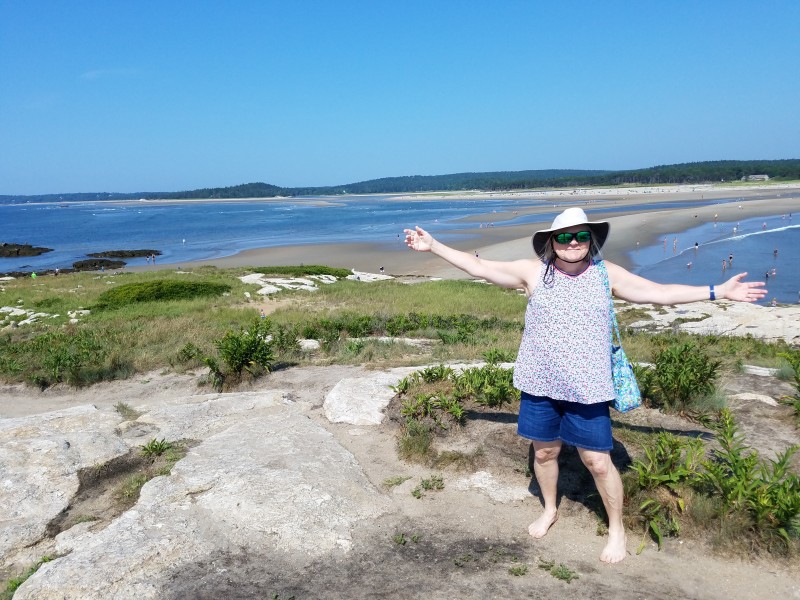 It was a hard climb up and worse down because we were both barefoot! Beyond this, we all took turns playing in the sand. Sonora, Michaela, and Colleen loved the 68 degree water and I tolerated it as long as I had to. I was surprised how busy this beach was for a Monday!

We went back to Colleen’s house for dinner that night. She took us for a walk around the property including an abandoned railroad track. 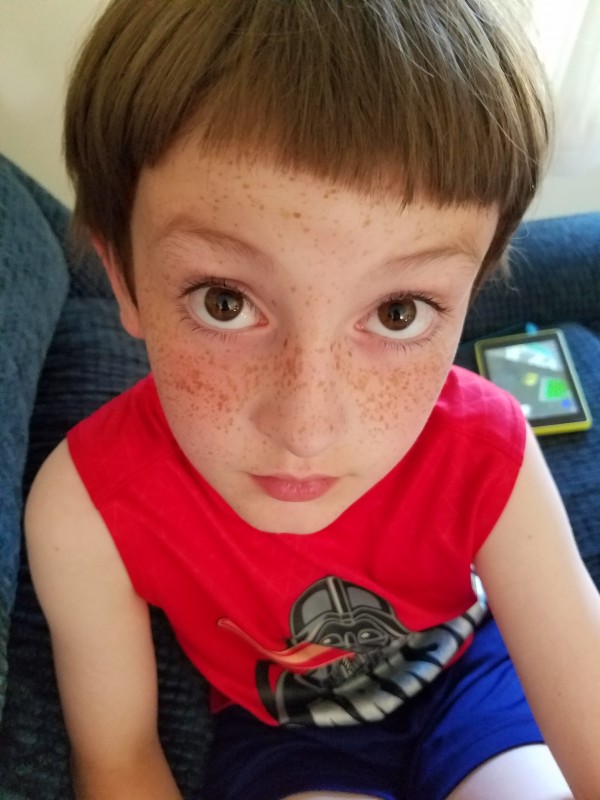 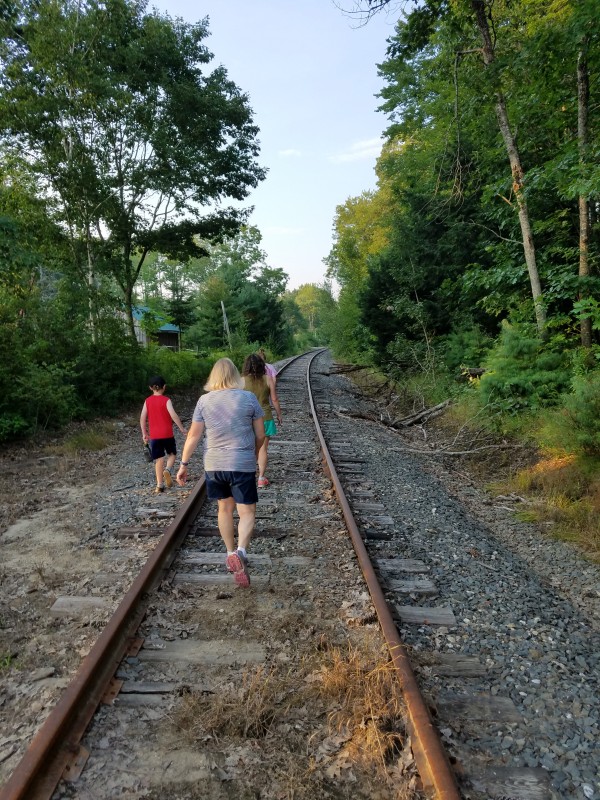 We were sad to say goodbye, but it was time. We packed up Sonora back into the van and headed back to the motel. We finished the second phase of this trip and now our party was down to three people.