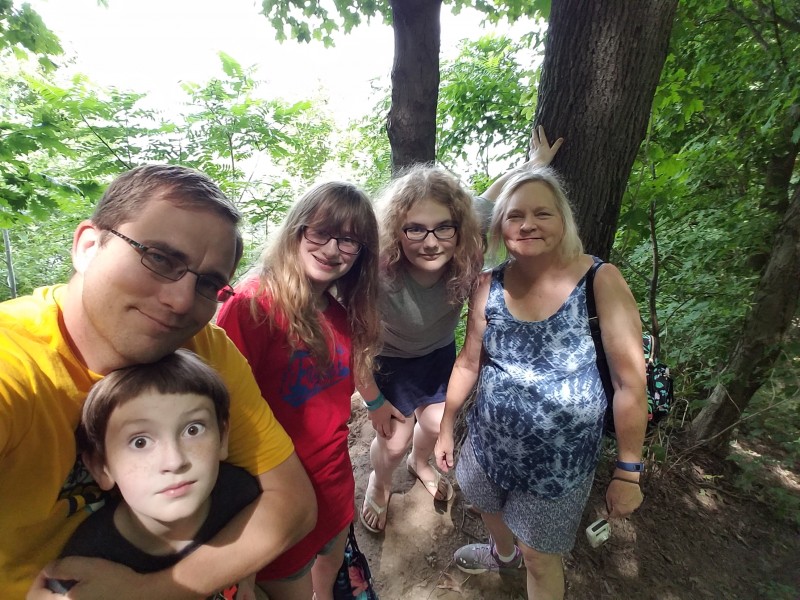 I promised my brother Hiatt that I would take his kids home after the summer to Maine. I was looking forward to a family vacation in the north east. I had not really spent any time there, so it would be a cool family trip. But two days after I told him I would do it, we found out about Corvin’s Freshman orientation and sports tryouts. This meant that Corvin and Danelle were not going. I didn’t like splitting up, but Sonora and I would go to Maine with Sean and Michaela and have a great time. Later, my mom offered to join us, so it became 5 of us headed out! 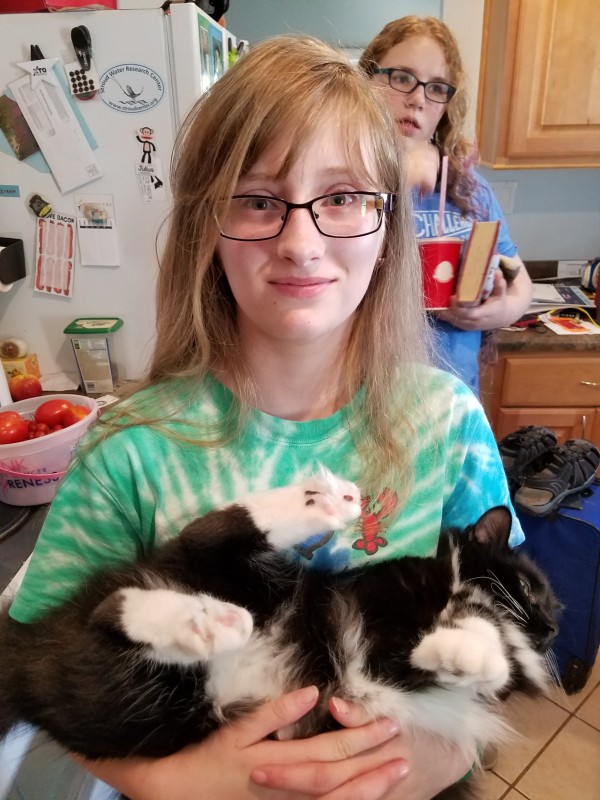 Sean posing in the kitchen. 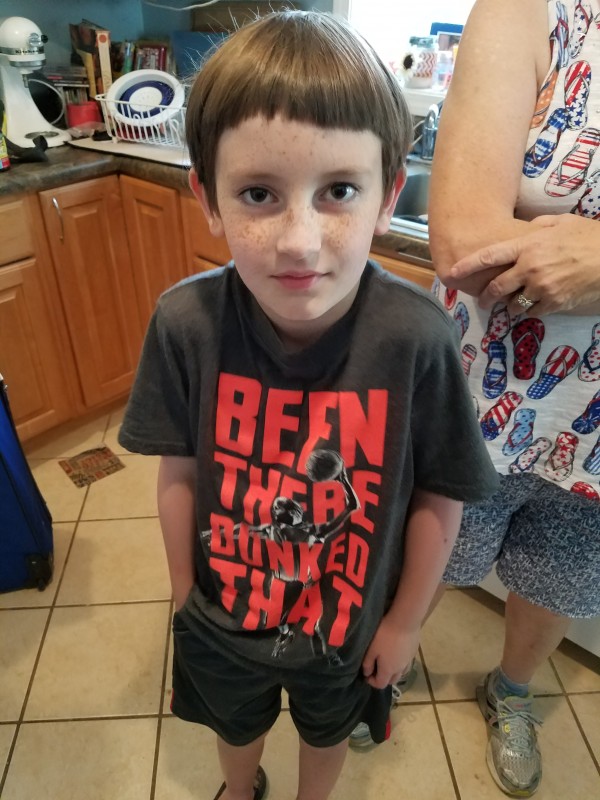 Eventually the day came, we left on a Thursday afternoon from St. Louis. Dad brought the kids and grandma to St. Louis to save us some driving. My plan was to have at least one interesting stop for an hour or more each day of the long drive so all of us didn’t go crazy driving in the van all day! So we headed east quickly on I-70. All of these stops were planned by looking at the proposed route and asking Google what there was to do. I hoped that I chose wisely. So we first got food at Sonic in Indianapolis. We were all ready to eat, but we probably took too long at dinner…

I’m not sure what was going on in the back of the van, but the girls were having fun! 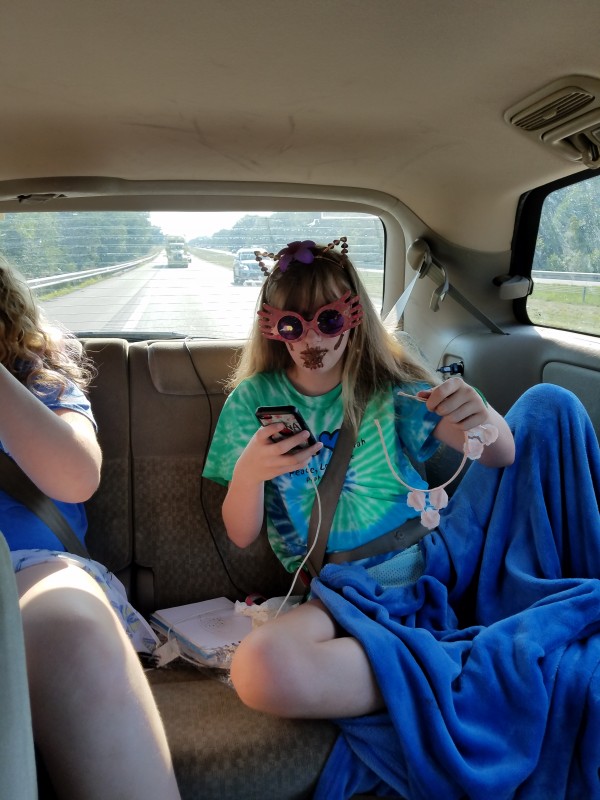 The fun continued into our dinner stop. 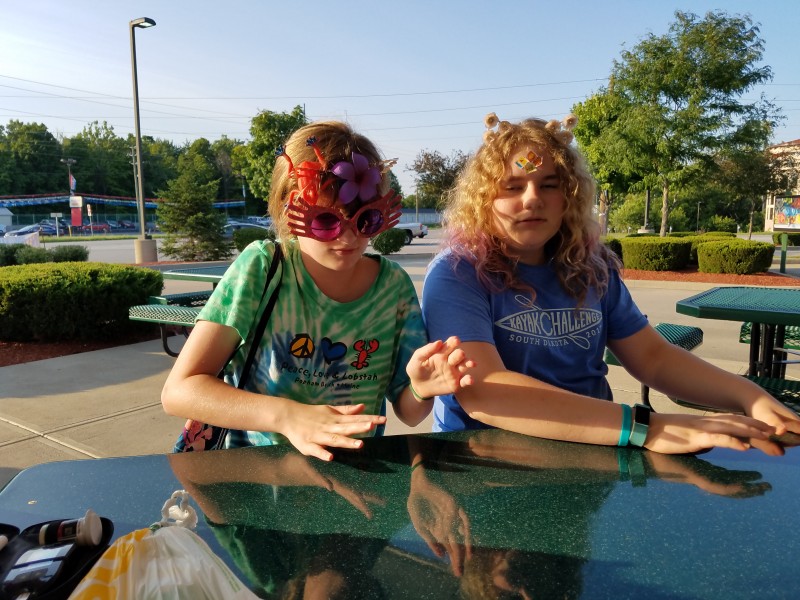 I did my best to entertain Sean along the way since the girls were focused on each other. I hope he likes the silly photos, cause they don’t make me look any better! 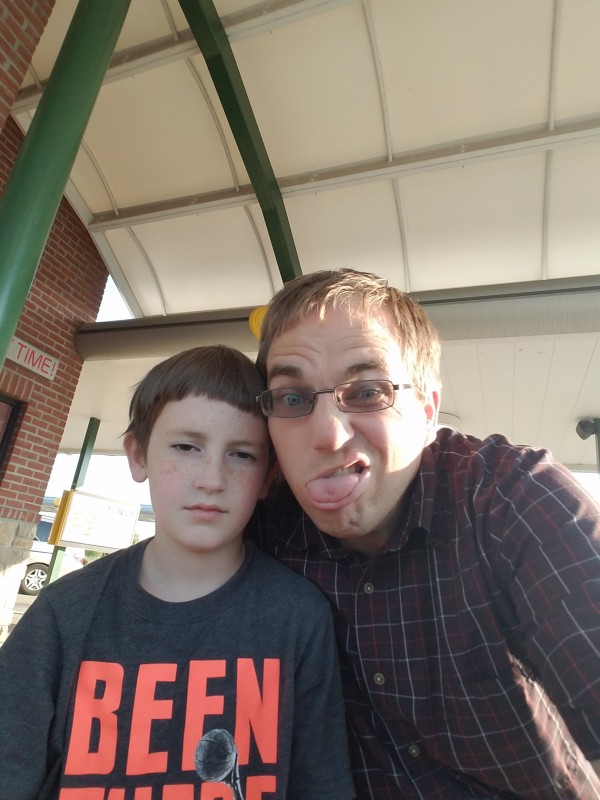 I eventually got them packed up and headed across town for our first official fun stop of the trip. I had us going to The Virginia B. Fairbanks Art & Nature Park: 100 Acres. It looked like a cool place to get out and walk around. It was so much fun, we were disappointed we didn’t get there sooner to see more of it. The kids (and mom and I) had a fantastic time!

The world’s craziest basketball court that the kids couldn’t get enough of. Its right off the parking lot. 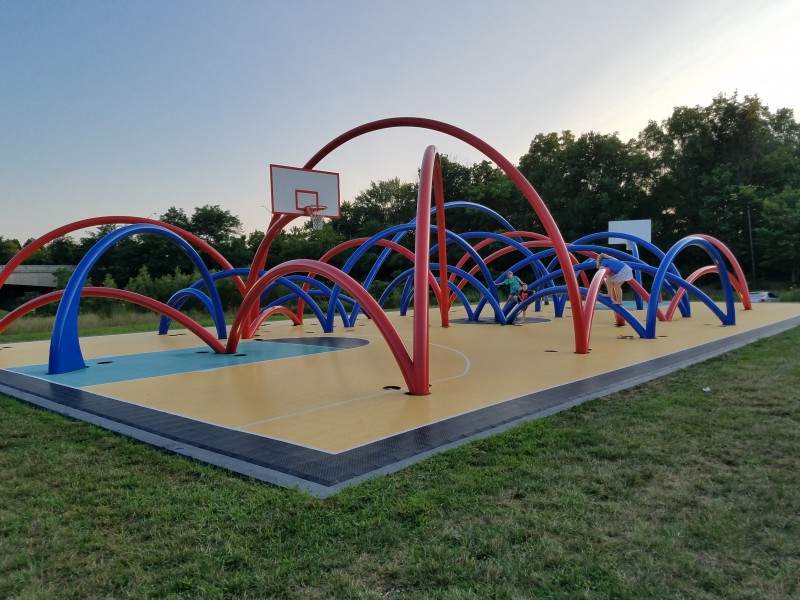 Some sort of pseudo slide that the kids took turns going down. 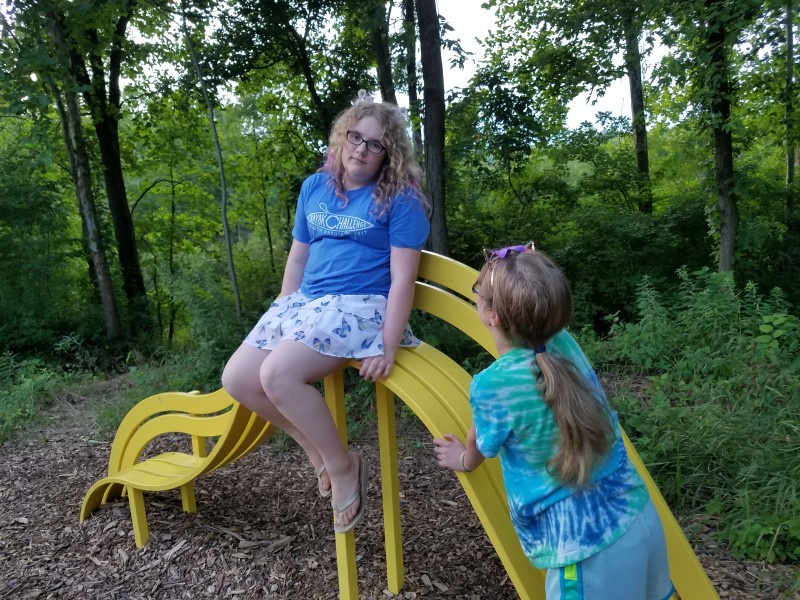 This is a skeleton that is in parts on the ground. You can jump from part to part. 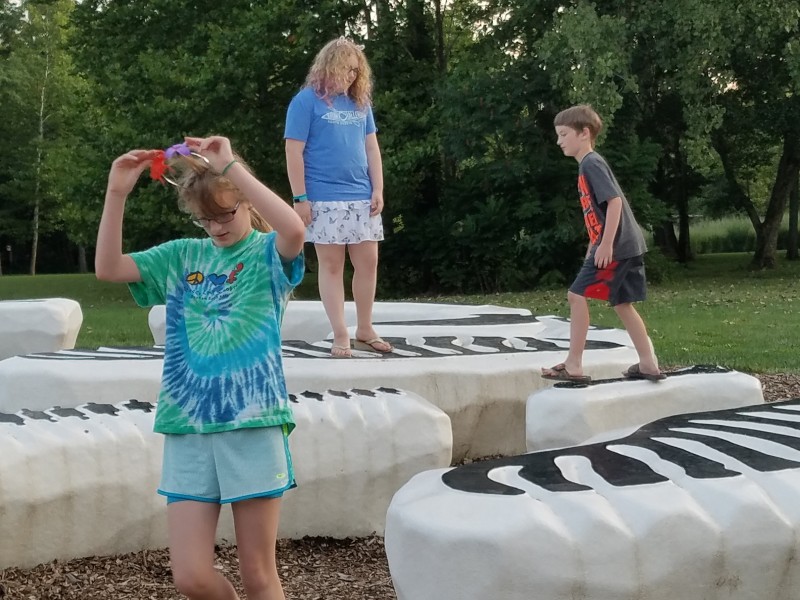 I couldn’t get mom to jump. 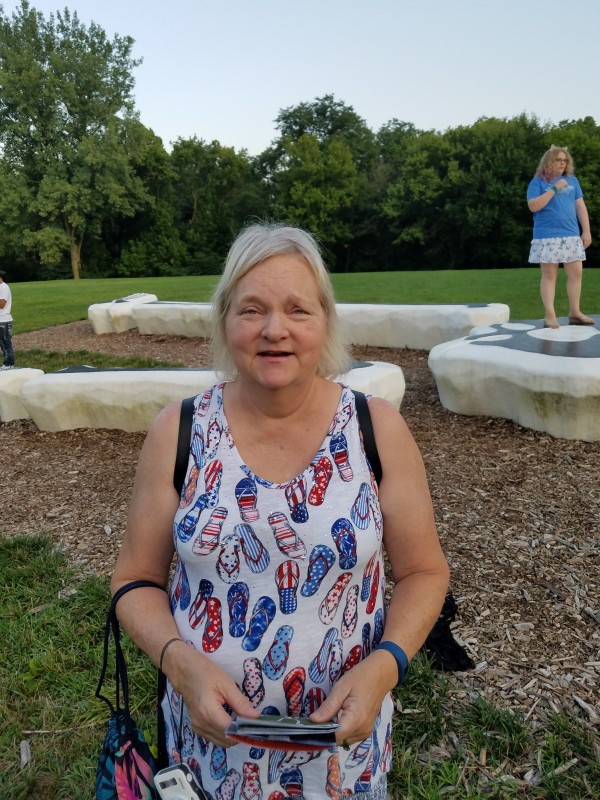 Looking across the lake. 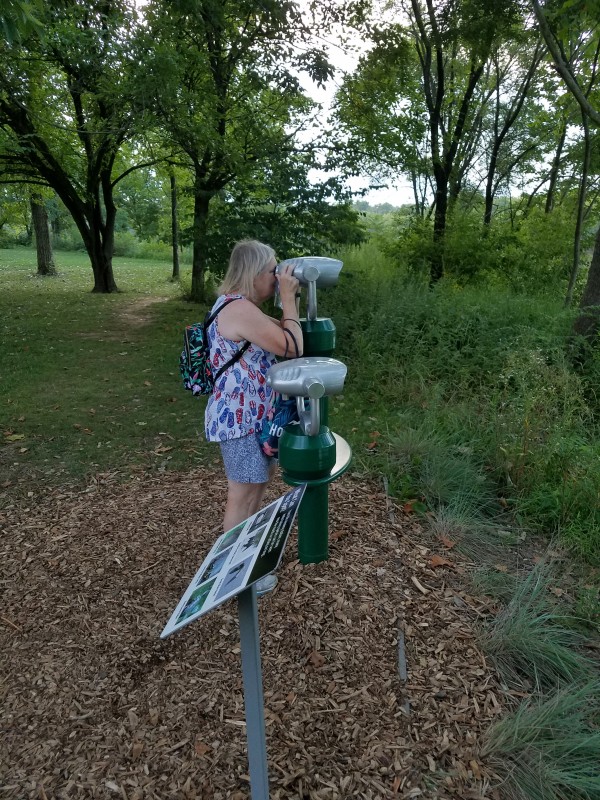 Aliens, or rings suspended in the air? 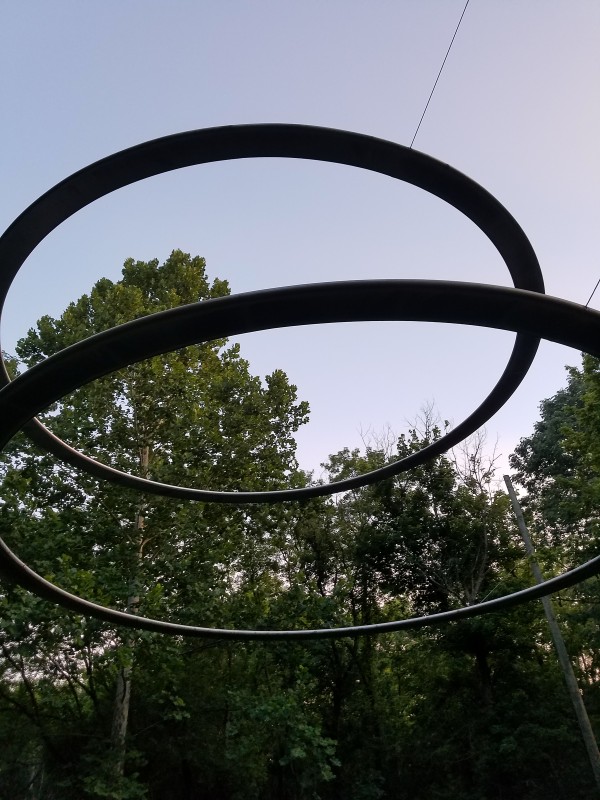 More of the basketball court. 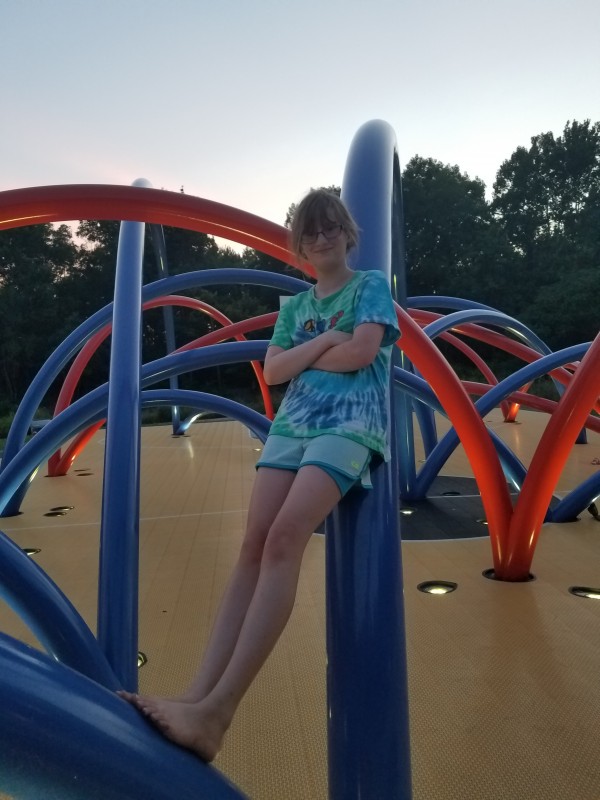 The kids slept great cause I kept them up late driving. Then being the horrible task master that I am, I got them up early to start the next day. We needed to get to the middle of New York to be on time. So we started another long day of driving. We stopped in Walmart for some supplies and I found some fun… 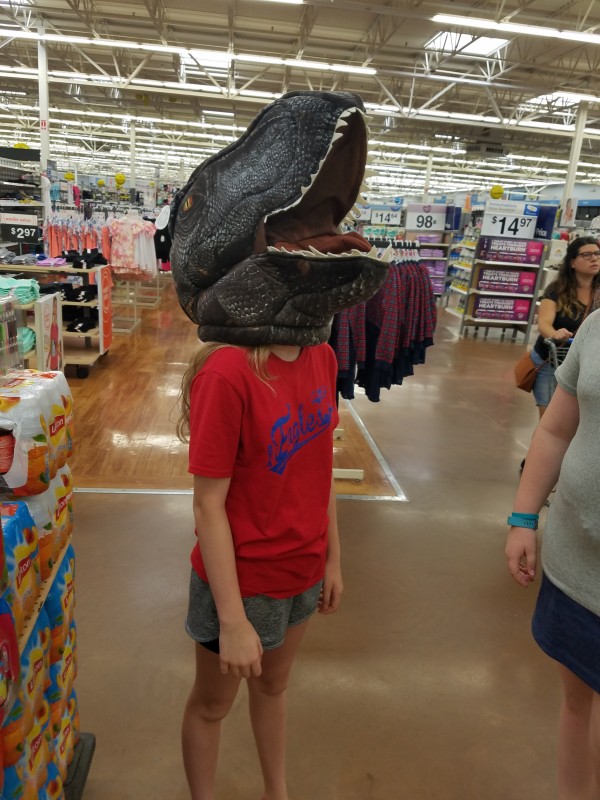 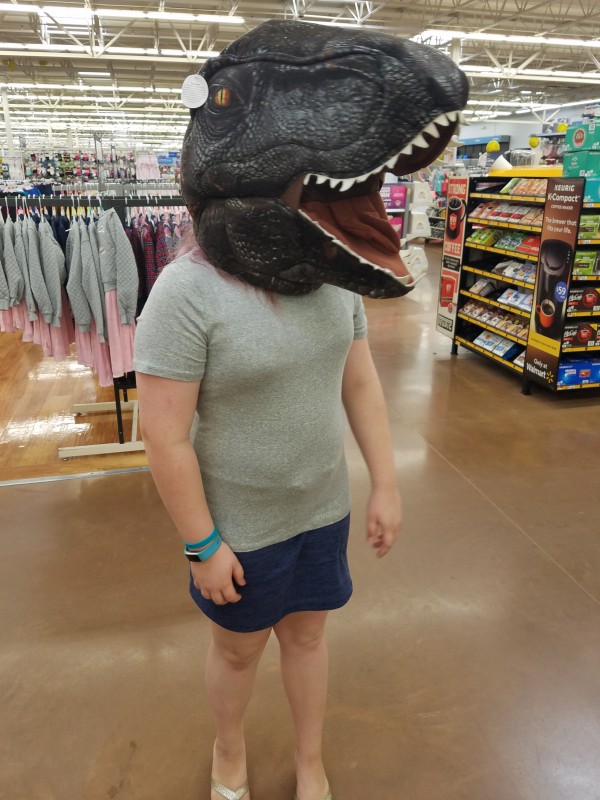 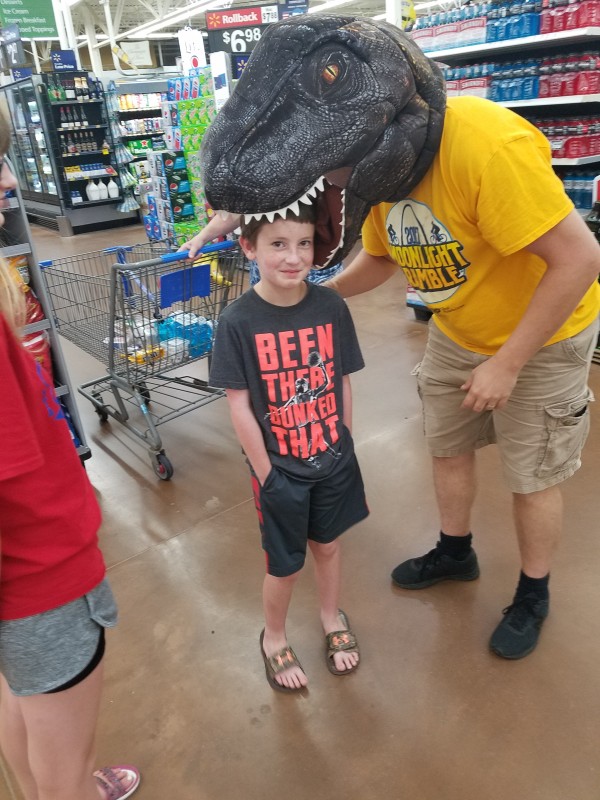 Today I had two stops up my sleeve. The first was a very cool park on lake Erie aptly named “Erie Bluffs State Park” We only went through a small corner of Pennsylvania, but the park was there on the lake and it was perfect. The nature was a great break from the road. We all hiked and acted silly along with catching frogs. 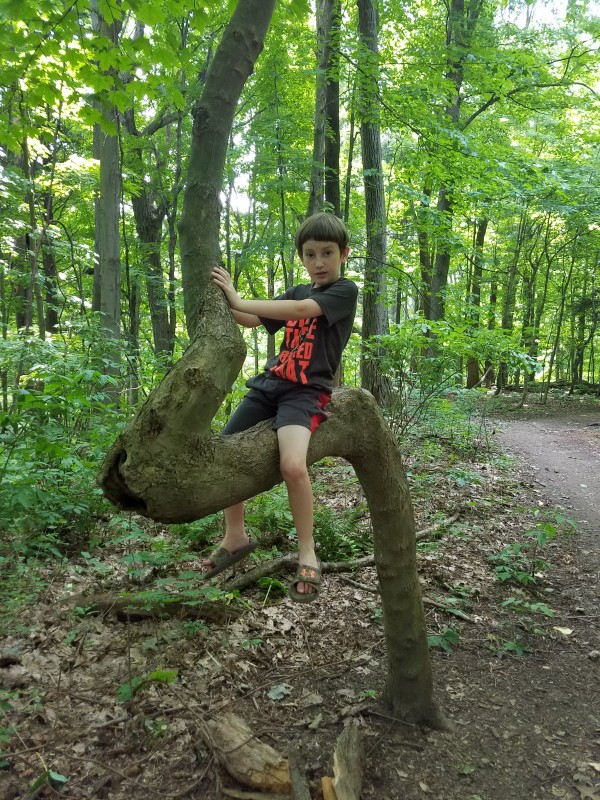 Michaela in the tree. 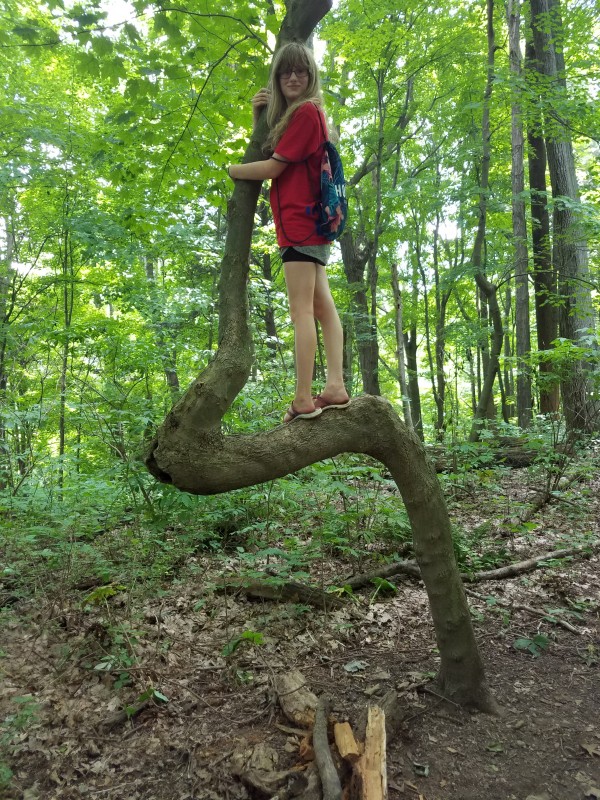 Sonora found a different one. 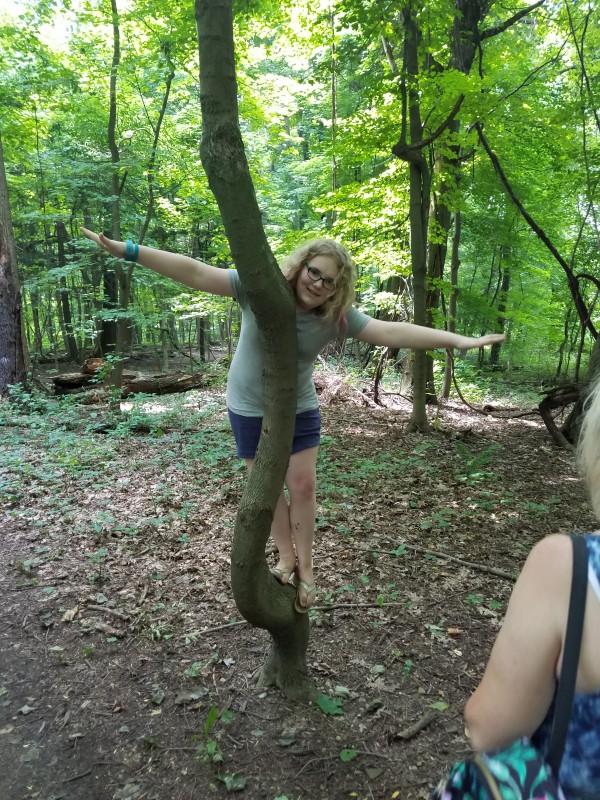 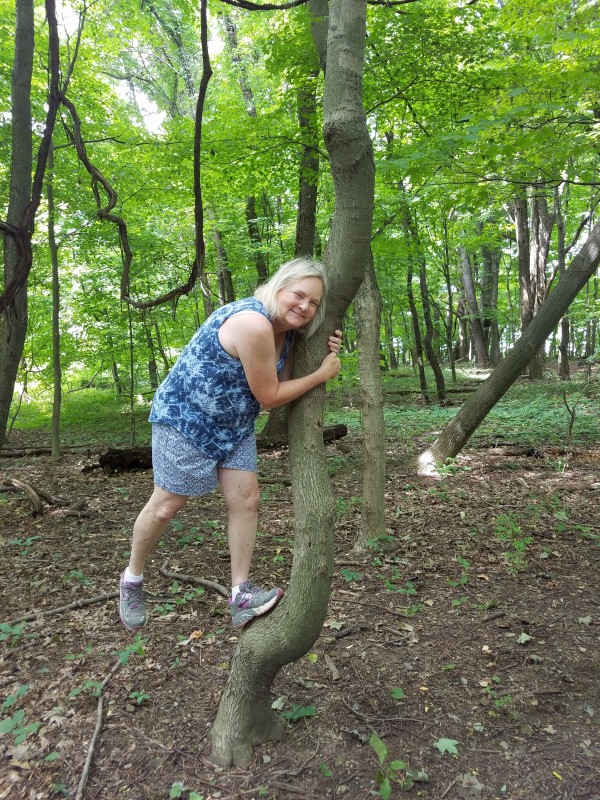 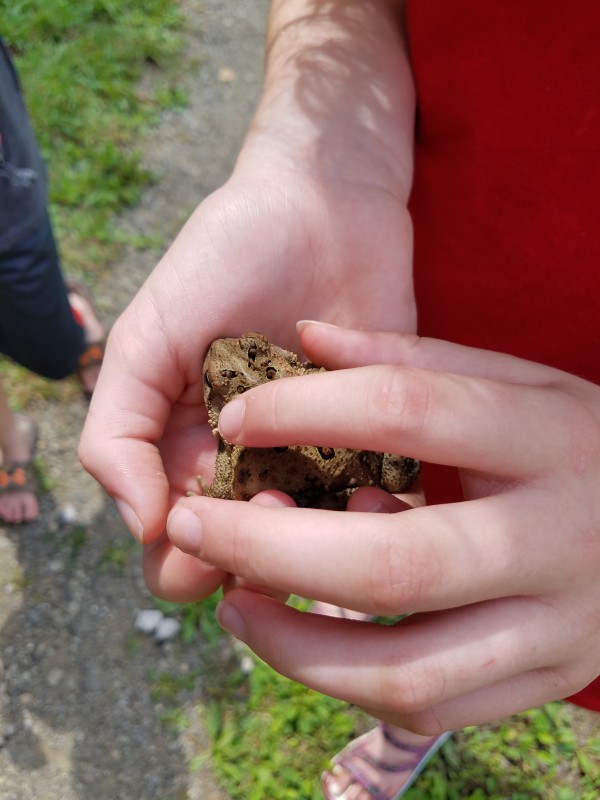 Just down the road was Presque Isle State Park that was also on my interesting list. Its a small strip of land that comes out into the lake. I figured we could drive out there and view it. It had at least 11 different beaches on it and we couldn’t resist!

Sonora and Michaela playing on the beach. 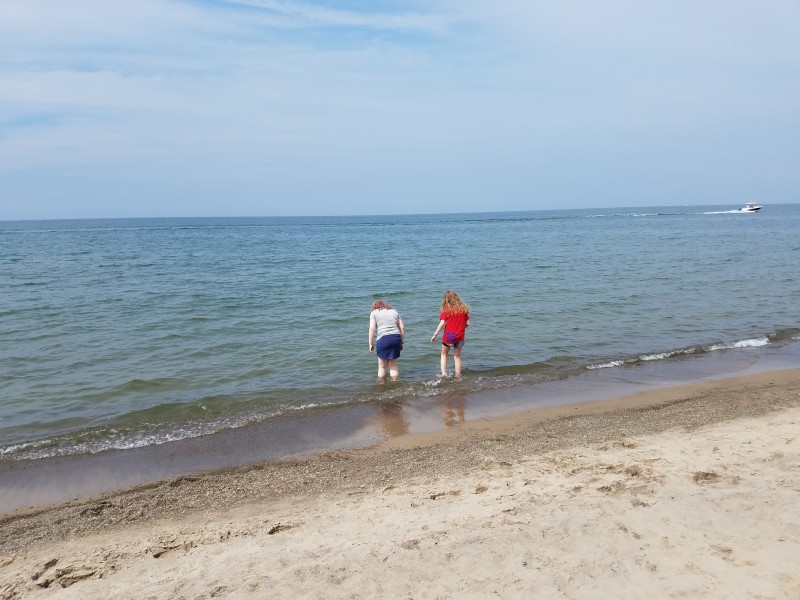 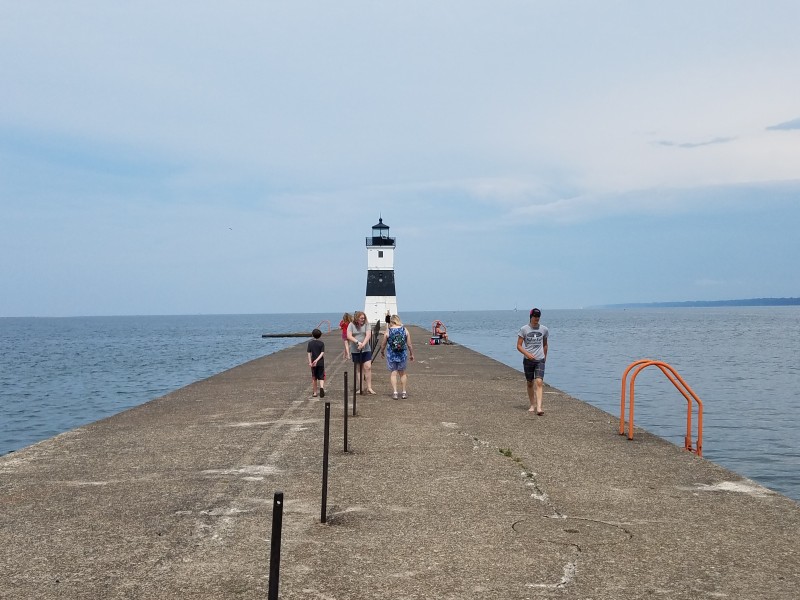 I got a funny picture of Sean when we stopped for lunch. 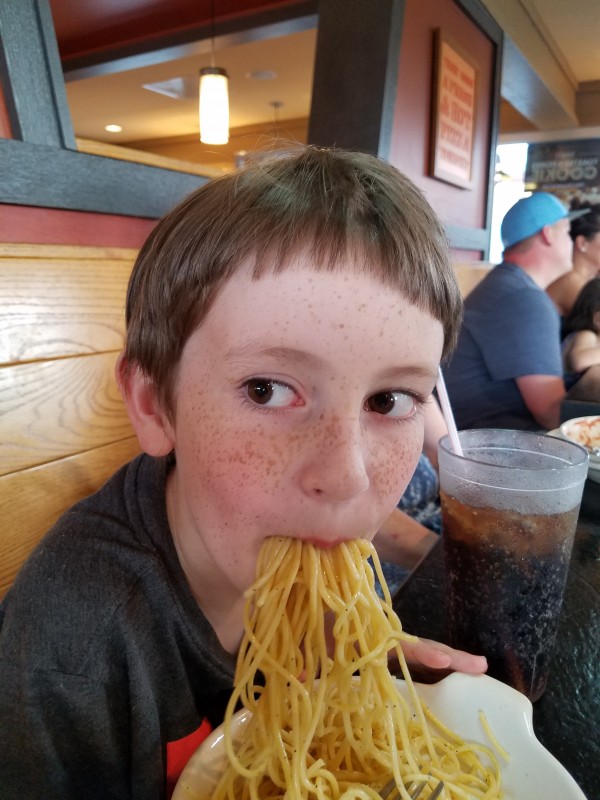 The last day of our drive to Topsham, Maine was still fun. The kids were getting anxious to see mom, but I kept them busy.

Our stop today wasn’t going to be much for the kids, but I thought my mom would appreciate it. Cooper’s Cave in Glens Falls, New York is where James Fenimore Cooper was inspired to write The Last of the Mohicans. I’ve been there before with Danelle, so I knew what to expect and approximately where it was. It was only going to be a 30 minute stop as its very industrialized now, but still worth a moment. The kids put up with it quite well and just enjoyed being out of the van for a bit.

Sean and Michaela on the ledge. 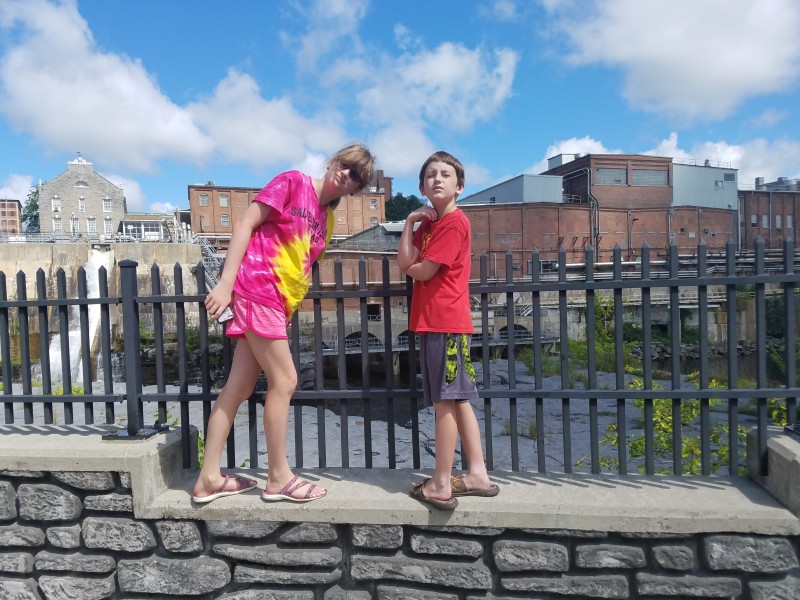 Mom at the overlook. 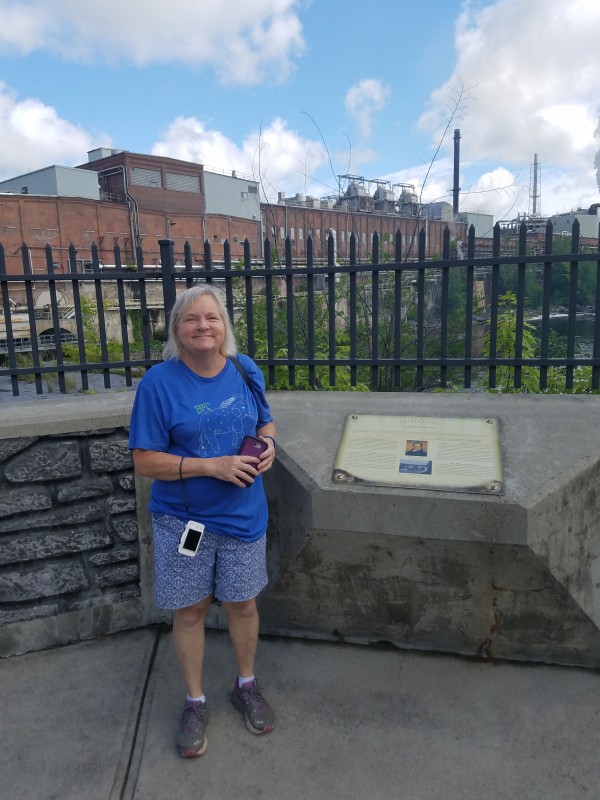 Its not a selfie if you use a tripod and a timer. Here we all are! 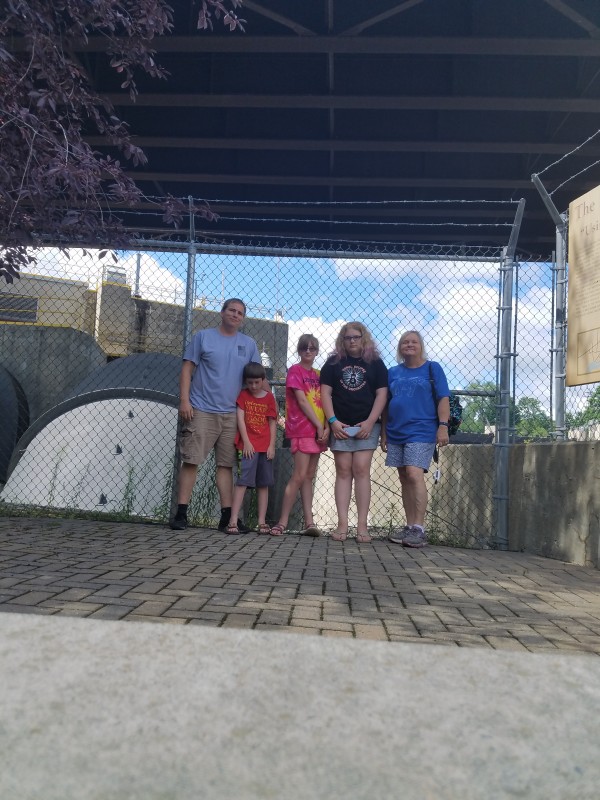 Like this covered bridge. Of course we drove through it. 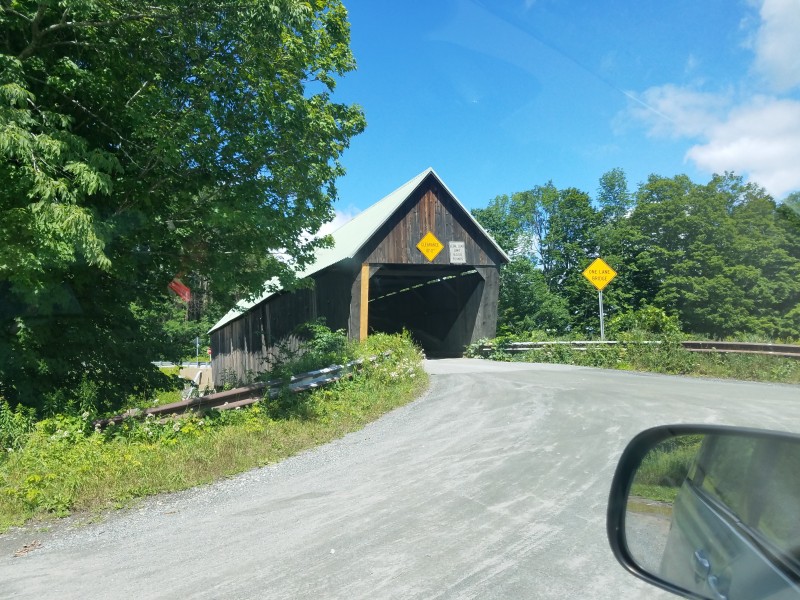 And a a cow statue for mom 🙂 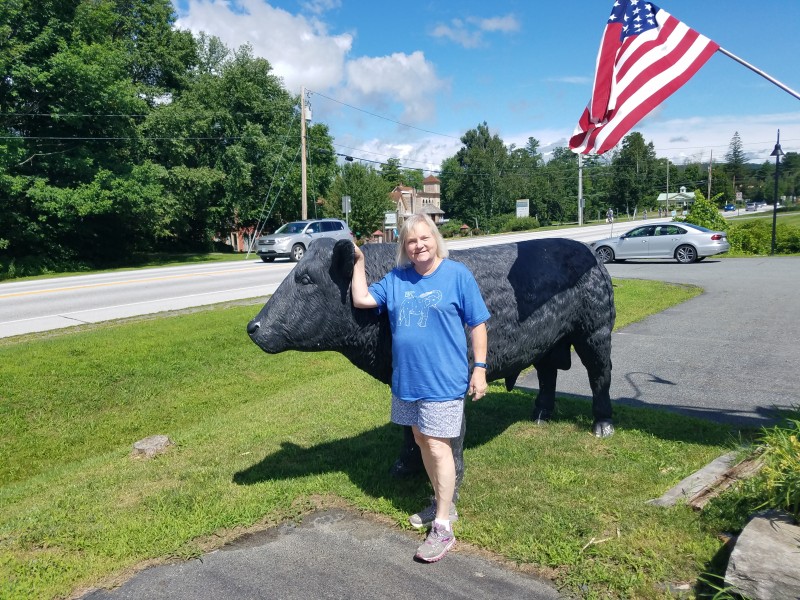 Driving north on I-95, as we crossed into Maine from New Hampshire, we encountered a traffic jam. A bathroom break was needed, so I got off the highway in search of a gas station. To make a long story short, we found one back in New Hampshire and one highway exit south. When we got back on the highway, the next exit after our original one was a rest area that would have been a much better choice.

Eventually we got the kids home to mom. Sonora decided to spend the night with Michaela. Mom and I found the hotel and rested until the next day…