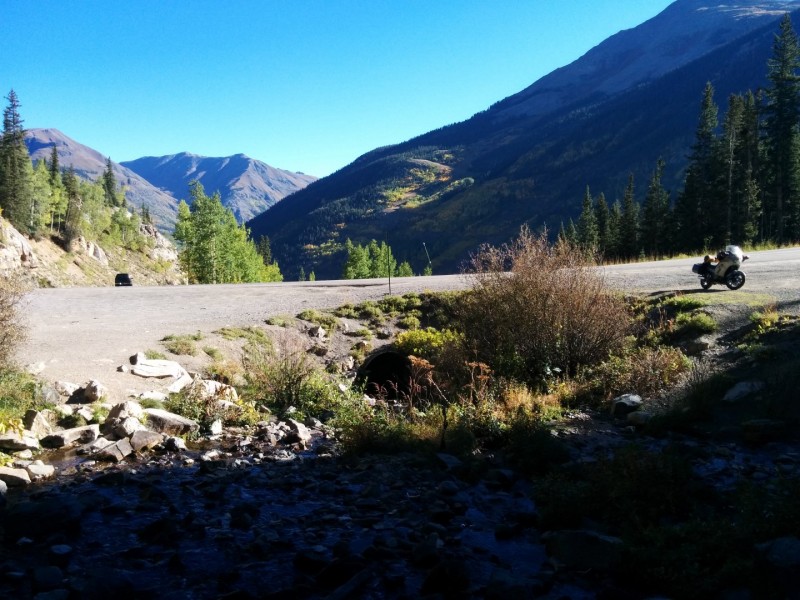 Today was a day of pain, opportunity, and luck. It started out as the previous two had, in a motel room quickly getting ready before the sun came up. I had about an hour’s ride before I got to Silverton, CO, the northern gem of the Million Dollar Highway. From there south for at least an hour would be some of the most spectacular views of my ride. I was off to a gas station to fill up my bike and my belly!

Riding any Colorado road in the mornings or night can leave a person bone chilled. The sun was out, but it was frequently behind the scenery. I realized that if I was too cold, I wouldn’t be in top riding form, and found it best to stop and put on my rain suit for extra wind protection. Here is what that looked like!

Finally warm, I was able to ride normally and happy. Its worth not looking “cool” to be happy and warm and the stop only took about 10 minutes. It didn’t take long till I further south and the road got very interesting as did my ride.

Watch the video below, and you’ll see around minute 4:50, I pull over to look out at an overlook with a waterfall. Its a great view, but when I get back on my bike I mess with it a bit cause it won’t start. Eventually it fires up and I go on my way. At the 7:25 mark, I have to stop for a traffic signal for one way traffic. It seemed that I was going to be there a while, so I shut off the bike again. At 9:55 you can see the traffic light turn green and me try to start the bike. It took about 20 seconds for me to get it to work including some frustrating hand work and attempting to wave on the traffic backed up behind me. But she did start and I was off.

My problem now was I knew that the next time I turned off the bike there was a very high likelihood that it would not start again. At this point in the trip, I’m ahead of schedule and willing to stop more to view the things around me, with a machine that doesn’t want to cooperate. Deep down inside I knew that the moment of truth would come and I didn’t want to ride in fear all the way to Durango without stopping.

Eventually the moment was right and I stopped on an uphill to see a scenic looking waterfall coming down from the mountain. Delaying the inevitable, I hiked around to get a good look.

Eventually I went back to the bike and it failed to start. But a few summers ago, I did a solo ride in St. Louis and had a similar issue. I rode out to Hermann, MO and stopped at the river to enjoy the view. When I got back on it wouldn’t start. After a Facebook post to the Concours Owner’s Group, I got a reply telling me to check the fuses, and it turned out I had blown one. So with past experience as my guide, I started to take off the side panel that hosted the fuses.

With the first panel off, I learned that I took off the wrong one 🙁 But I also saw the manual adjustment for the suspension that I have never tried before. So I took a chance and adjusted it. I wouldn’t know what this did until I could get the bike started and back on the road. So I put the panel back on and went around to the other side. I took off the panel and found the fuse box. Then I triumphantly took out each fuse knowing that I would find a blown one and could just replace it and be on my way.

When the last fuse was pulled and none were blown, I got momentarily flustered. I have no cell signal to call for help and I’m not sure what is wrong with my bike. I remember reading a story by Daniel Meyer about approaching a guy on the side of the road in Alaska beating his motorcycle gear because his bike wouldn’t work. Once the guy calmed down, they went over the bike system by system till they found the problem and got him going again.

With a little patience and a happy mood cause I was in Colorado about the farthest away from home I would be the whole trip, I started taking the motorcycle apart checking every electrical connection I could find and then testing to see if it would start. Eventually, under the seat was the ignition pack that when wiggled caused it to work once then fail. After some working of the harness, I was able to get it to work 5 times in a row. 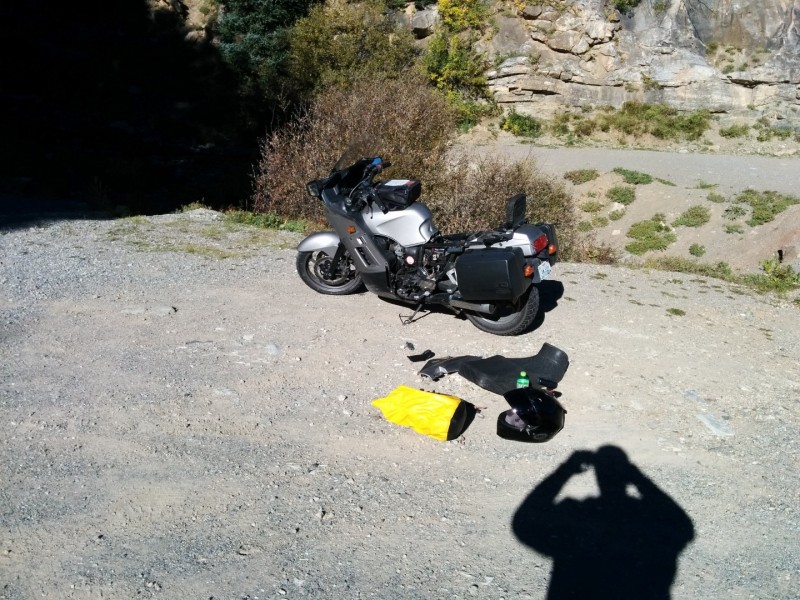 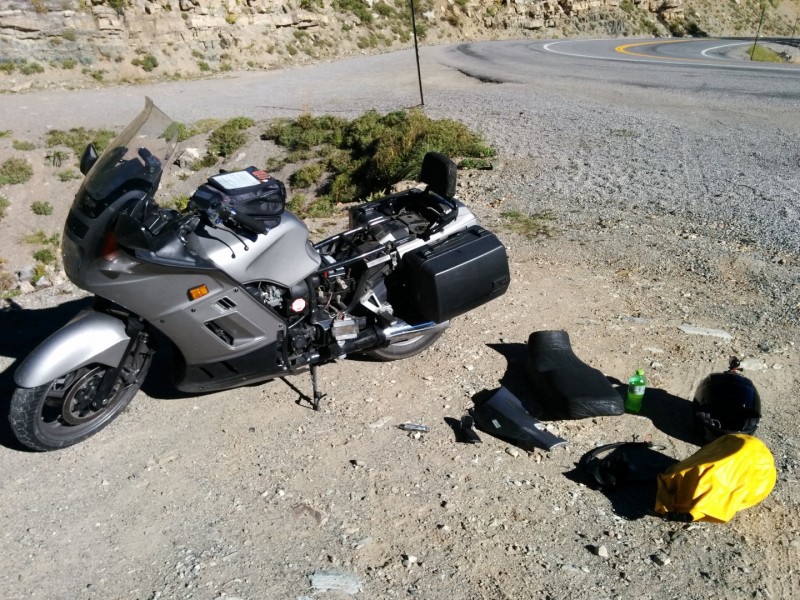 With things back together, the ignition didn’t give me any more problems for the rest of the trip. Ohh, and the seat adjustment was amazing, making it more bouncy. My butt complained a lot less which made me happy. Come back in a few days for the continuation of the rest of this day.