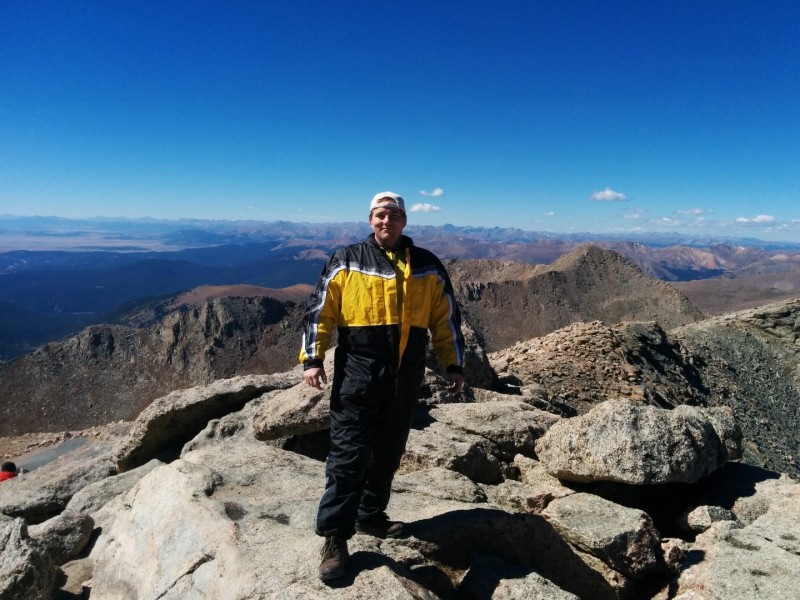 I woke up to a brisk 41°F this morning. I didn’t want to waste any sunlight, so I packed quickly and got some gas station breakfast and headed out. I made it all the way to Denver and a little past on a single tank of gas, getting 220 miles without hitting the reserve. I was getting a bit nervous about running out of fuel because I was going up and down large inclines, but it all worked out. With another full tank, I looked for Squaw Pass road. Once found,the road quickly delivered breathtaking mountain scenery with amazing curves. I was laughing to my self!

It didn’t take long to find the road with signs to drive up Mount Evans, the highest auto road in North America. The gentleman at the toll booth took my money and advised me of some rough pavement around miles 8 and 9. Ohh, and to be careful… I enjoyed the ride going up to the half way at Summit Lake. There, I stopped too cold to continue. Time to add some much needed gear. And maybe the view was awesome too! 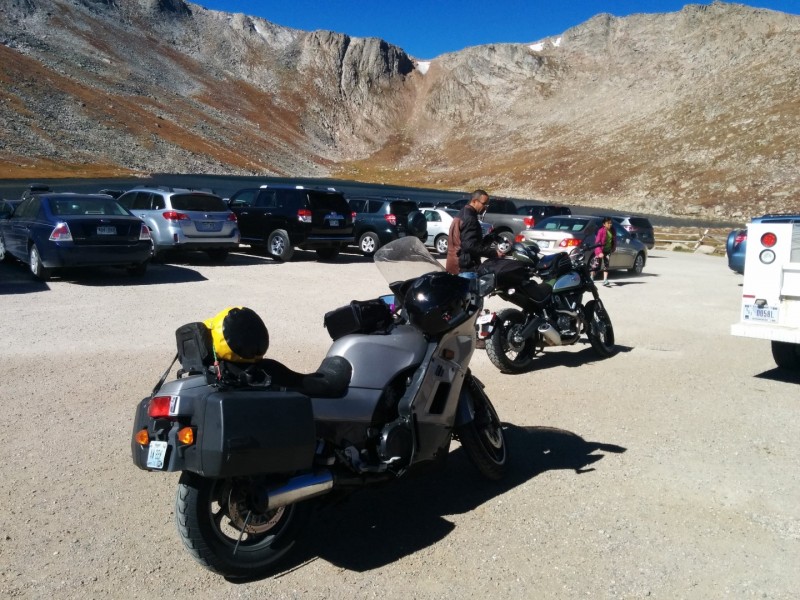 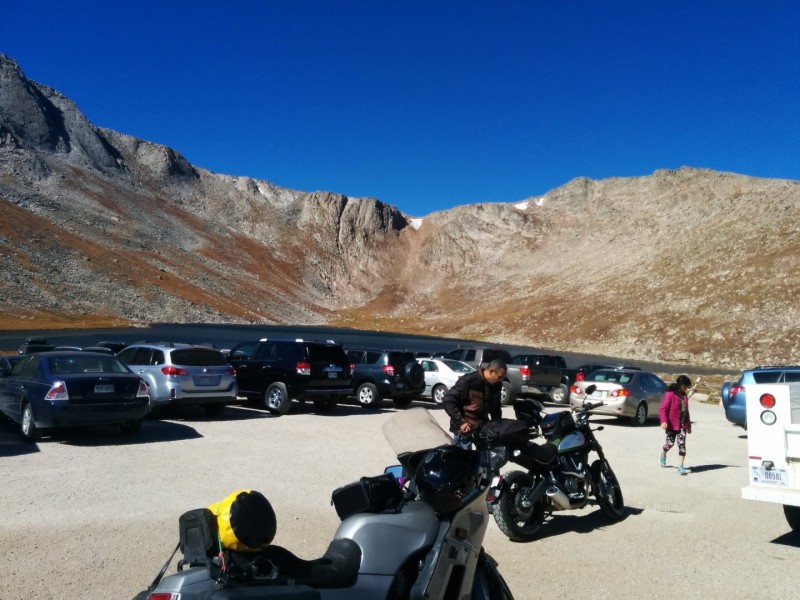 From here up, I continued much slower. I noticed at Summit Lake that I was having trouble breathing the cold thin mountain air. Its likely that I was also just so excited to be here hardly 24 hours after I left home! There were many hairpin turns that I was extra careful on as I wasn’t at 100% power. Eventually, I got all the way to the top of the mountain and was again greeted with an amazing view. But there was trouble at the top. 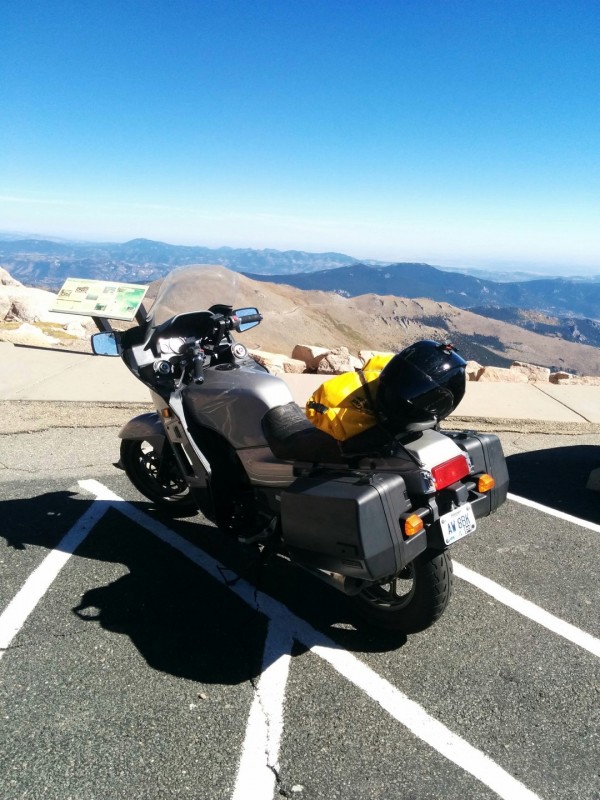 Parked at the top, I realized that I wasn’t at the top. There was still a trail to climb if I wanted to actually be at the top of the mountain. Light headed (fat and out of shape) from the altitude, I started climbing the trail. I left my one piece rain suit on as extra wind protection as I was still cold. I was tempted to wear the helmet for my head, but thought that would be too much. So I started up the trail. About half way up, I was passed like I was standing still by a group of nuns that didn’t appear to be wearing any extra clothing for the cold. I no longer felt like the stud that conquered the mountain! 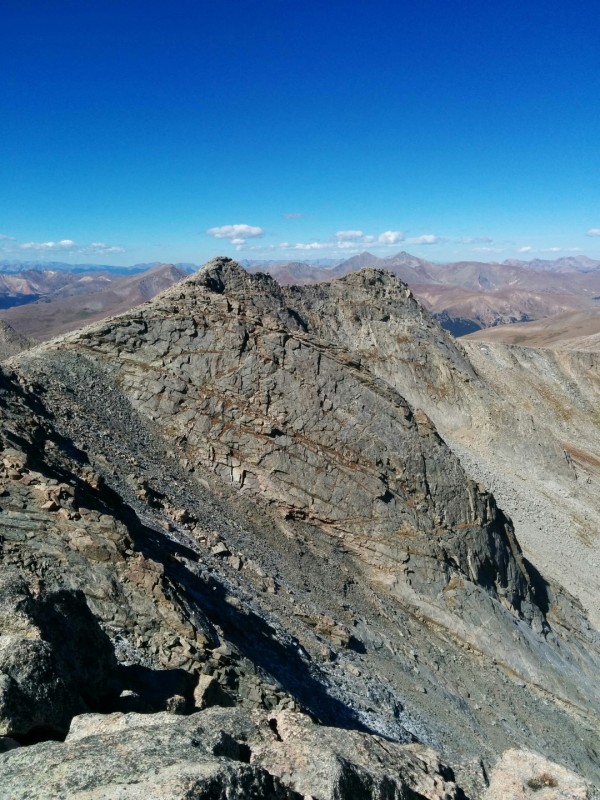 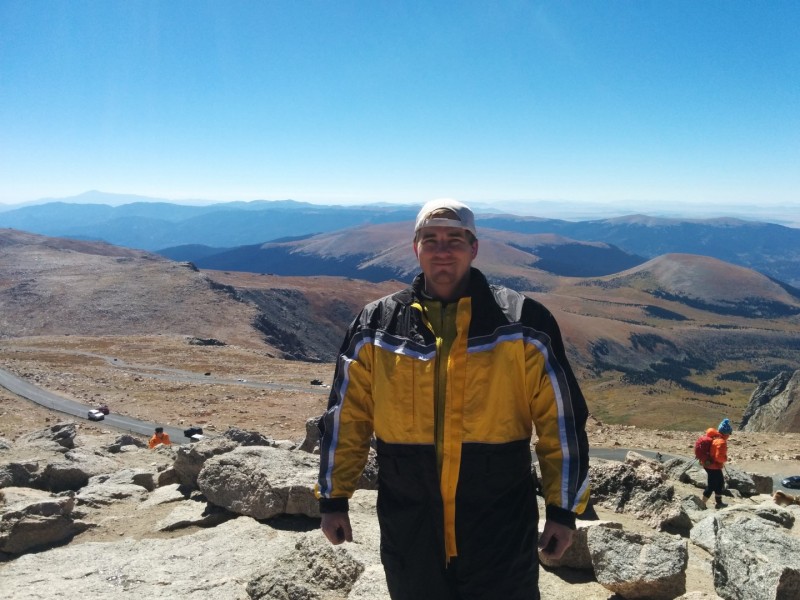 Video of going up Mt. Evans

Video of going down Mt. Evans

After a nerve wracking ride down the mountain, I went north up to Idaho Springs, CO. I was ready for lunch. Most people would stop at a local restaurant and take stuff in, but I had other ideas. So I found a Hardee’s and got my first official meal of the trip. But with the spirit of the trip, I went outside to the parking lot to eat and look at the scenery.

After a fast lunch, I was back on the bike riding again. I left I-70 about 10 miles west and took 381 in Georgtown, CO. I was afraid that I made a wrong turn. All the maps said I was going the right way, but the road kept leading towards a dead end. Eventually, it lead to a switch back that started climbing the mountain. I had no idea it was possible and was just along for the ride. Special note here, I expected all highways to have a 55 mph speed limit, but this highway was often 25 mph. Its important to plan accordingly.

There were some amazing places to stop along the way, that I want to go back with the family so we can randomly stop and see the sights! At the end of the pass, I stopped at Al’s Pits Barbecue. It was interesting enough to stop for a photo, but not to eat. 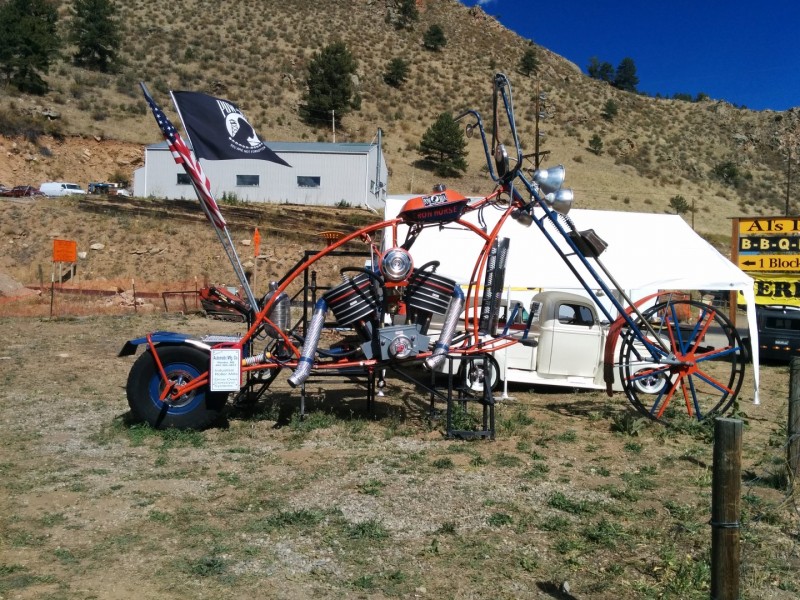 This next stretch was long. I turned down a gravel forest service road and went till I felt I was completely alone. Then parked to take an isolated photo. 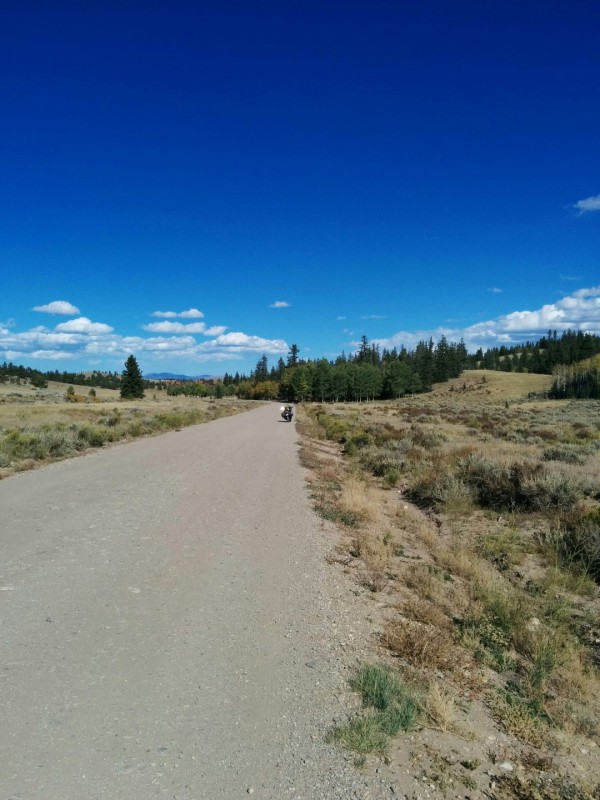 I also was motivated enough to take a video of how lonely the road was. Of course at the end of the video, a truck comes by…

From here, it was an easy ride all the way to Montrose, CO. Once there, I went to 3 hotels before I found one with vacancy. It was over $130 for the night, but I didn’t want to miss out on a room and have to ride any more as it was quite dark out now. Danelle was a bit worried about me at this point until I called her. If it wasn’t for the Spot Tracker showing her that I was still moving, she may have been in a panic.