So I talked Danelle into a canoe race with me. A simple 72 mile race in South Dakota. Here is how it all went down.

Thursday after work was the last day of school for the kids. We went to the after school party and let the kids hang around till right before 7pm. Then we went home and loaded in the pre-packed van and headed 4 hours to KC.

Friday morning, Danelle and I said by to the kids leaving them in KC for the next week with grandparents. We were on the road before 7am. We had to be in Yankton, South Dakota by 3 pm. So we took a nice long drive together up I-29 all the way. We had banked some extra time driving and were able to take a minor detour to see part of the river in person.

On the way to our detour, we came across some serious road construction. A lone flagman stood with the sign on stop. I pulled up and turned off the van. Being the friendly type, I got out and talked with the guy for at least 10 minutes before traffic piled up behind me and the pilot car came into view. He thanked me for getting out to talk with him as the job gets quite lonely.

Back in the van, Danelle and I laughed as we followed the pilot car through the construction. It wasn’t until we passed the road we needed during the pilot session that we realized that we missed it. So after we left the construction zone, I pulled a U-Turn and joined the ranks of people to be piloted back the direction we came.

Once on the correct route, we found what we were looking for. Mulberry Bend was an interesting place on the map and somewhere where the road went over the river that we could scout ahead. 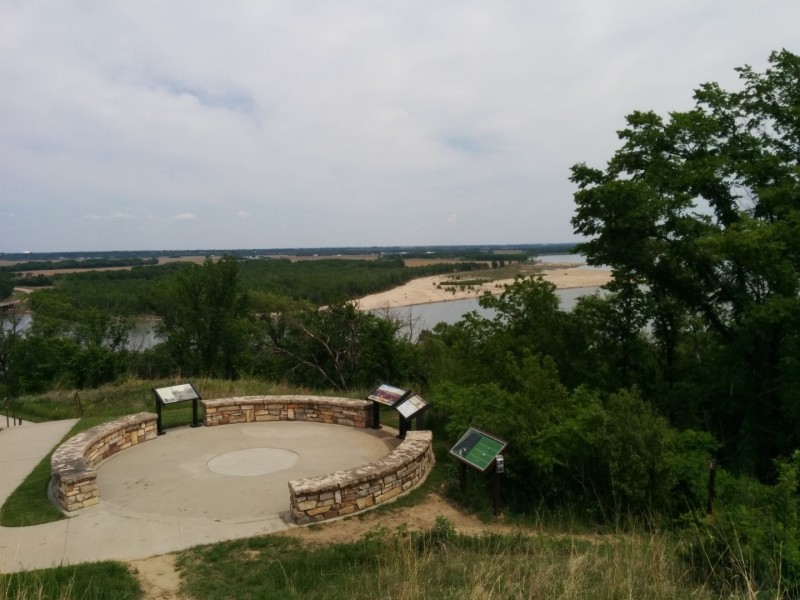 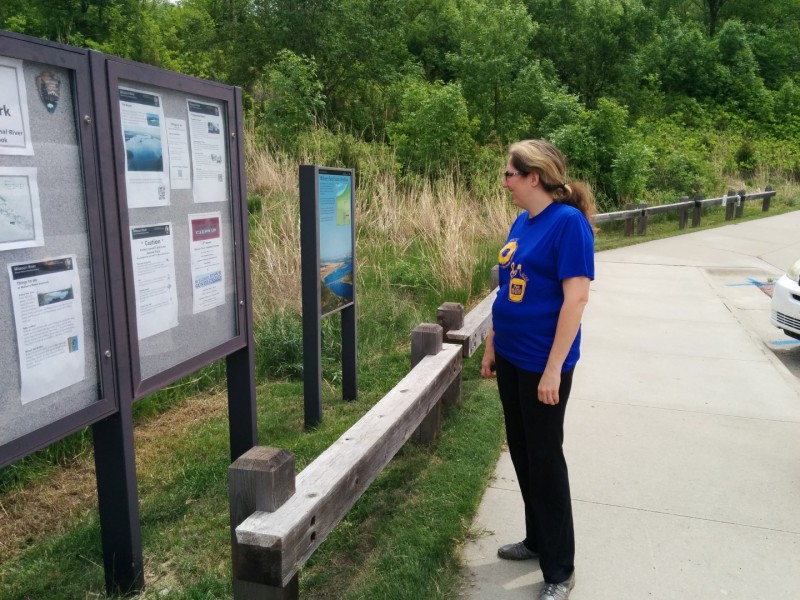 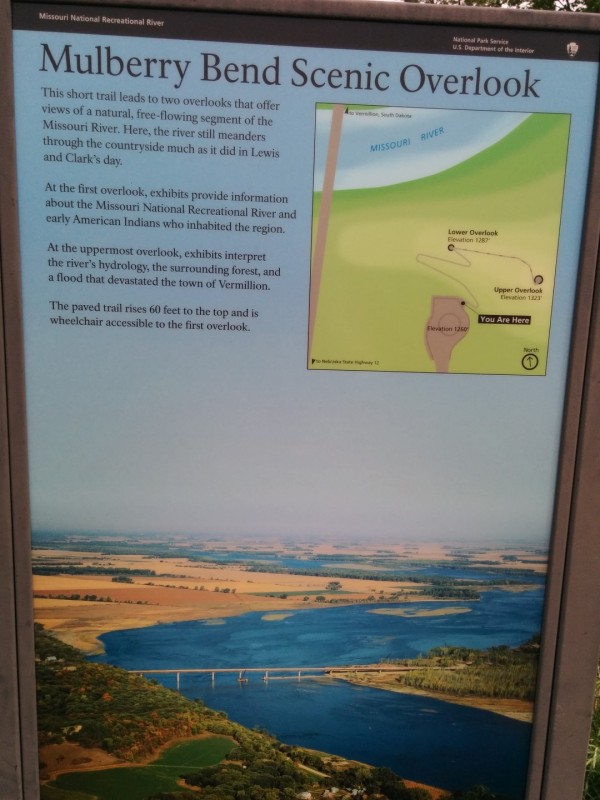 With a peek into the race to come, we got back in the van can continued towards Yankton, South Dakota. We were getting hungry and decided to stop in a nearby town for food. That town happened to be Gayville, South Dakota. There didn’t look like much to be happy about there, and nowhere to eat. I would like to say that I took the high road, but I didn’t. We stopped a few times for me to take photos and giggle at the name. 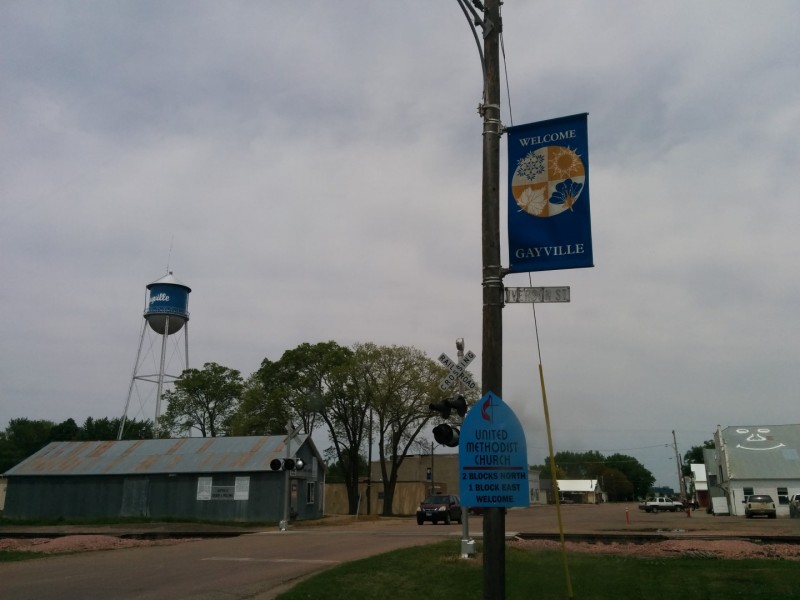 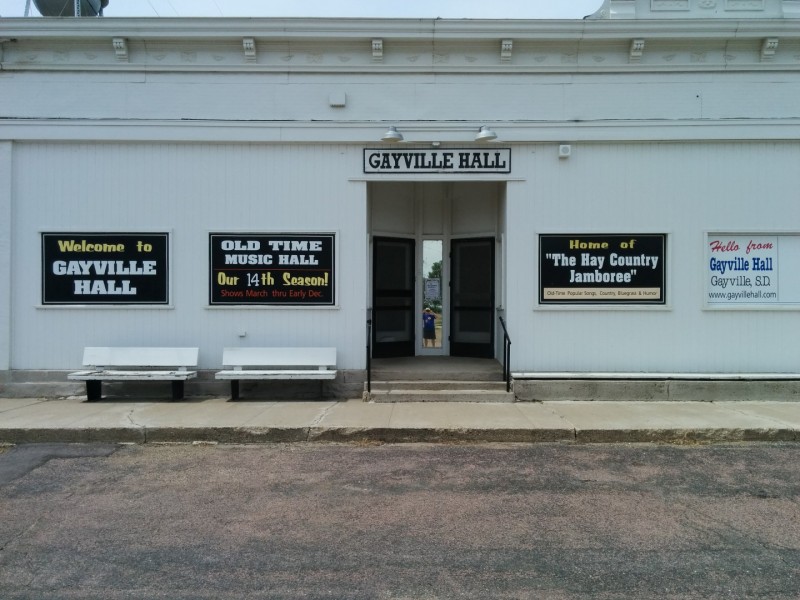 We ended up at a Burger King in Yankton for a quick meal before going to the race HQ to check in and drop off our boat. I was quite impressed with the organization of the race. The welcome committee was there to help with everything from parking to unloading boats. The check in process was simple and direct.

I sought out Jarett Bies and Steven Dahlmeier (the guys responsible for the race) after we checked in. I had been in contact with them about using RaceOwl to track the results of their race. While the ultimately declined to use the system, I still wanted to meet the people I communicated with.

With people met, there were still important things to do before we could relax. We drove a few blocks back into town to the Riverfront Hotel. It was slightly more expensive than the official hotel, but in easy walking distance of the race start. There, we unloaded everything we needed for the race and practiced packing it into as few pieces as possible. Once unpacked I said goodbye to Danelle.

There was a shuttle in South Souix City, Nebraska that I had to catch at 5pm. That would leave our van at the finish line so we could leave after finishing the race with no drama. I can’t begin to say how awesome this is for race logistics. And inexpensive to boot.

One of the most exciting things about this trip for me is that we were finishing the race somewhere special. Back in 2011 on day 2 of our vacation, my parents van broke down. We stopped in Souix City, IA to get it worked on. While we were there waiting for it to be fixed, we went to a park down by the river. The Missouri was flooding that year and they were busy sandbagging buildings. If you look at the photos, there is one of a building with sand bags, that is the YMCA that I parked at for the finish of the race. I remember saying while I was looking at the river, it looks amazing and I would love to paddle it, but it’ll probably never happen. Here I am, just 4 years later fulfilling a dream!

After a long wait in the parking lot with other paddlers, we took the hour plus ride in a school bus back to Yankton. When we pulled up, it had gotten cold and rained a little. The wind picked up and I could not get warm. I didn’t see Danelle and she didn’t answer her phone, so I walked back to our hotel room and got another shirt. When I was there, she finally called me back wondering where I was. We must have just missed each other!

After a nice safety meeting, we enjoyed a pre-race meal and quickly returned to our room. I mentioned the hotel before, but if you’re in the area, its awesome and worth staying at! 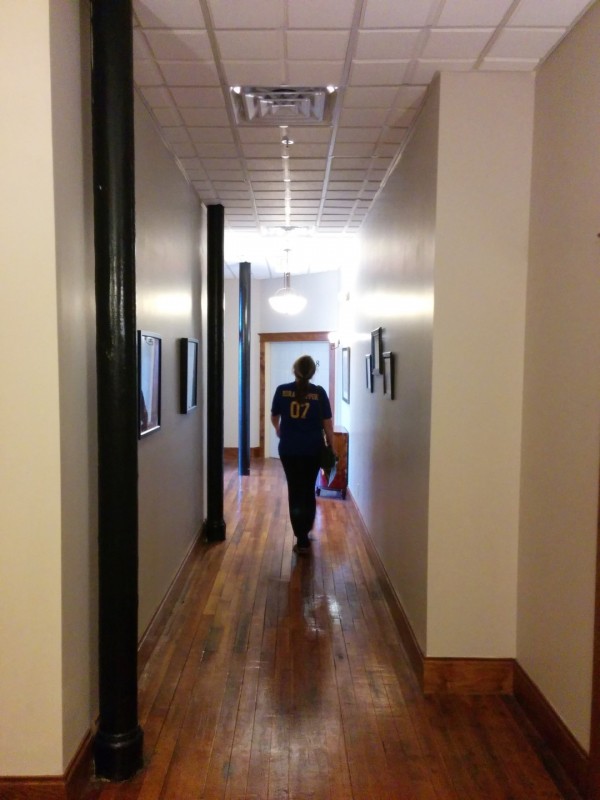 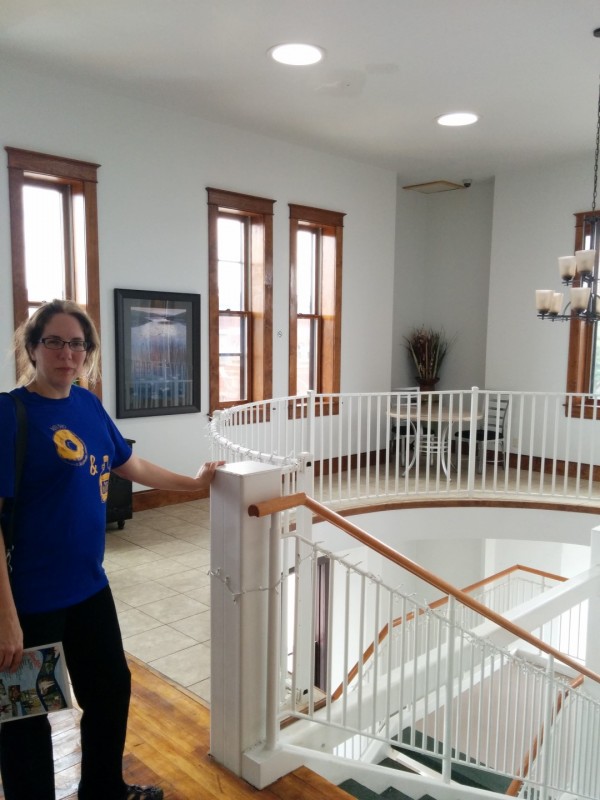 Race morning came early and we packed every last thing in our room into a bag and made one trip down to the race start. We must have looked like interesting hobos as we had paddles and bags! We got to the start and had to prove we had the required safety items before we were allowed into the race area. I appreciate their attention to detail and safety.

The division, Mixed-Tandem Adventure, we registered for required us to start with the boat against the shore. We were not early enough to have a front spot, so we were in the second wave for launching. Due to the length of the race, we were not worried about a few seconds as it doesn’t matter in a 72 mile race. 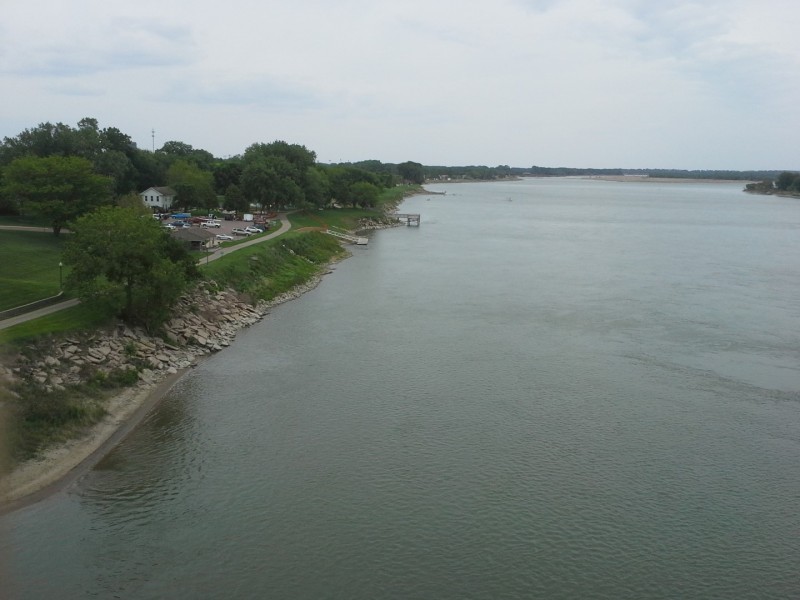 Starting Area behind the wood structure on the left

When the horn sounded the start of the race, we moved the guy in front of us fully into the water then got ourselves in and moving right away. We stayed wide of the other boats to avoid the drama of colliding with other boats at the start. Slowly, we started passing most of the boats in front of us and establishing our place in the race. I was in front with Danelle in back.

The race is a bit of a blur for both of us. We remember that there were 4 checkpoints spaced out. We didn’t stop at any of them which saved us valuable time. It was also great that we put in a track in the GPS ahead of time. A few times, we were unsure of where to go and deferred to the track picked from the satellite images.

At the end of the race, we had spent 11 hours and 31 minutes in the boat non-stop and took first in our division by almost an hour! I gave the race my all (including little training) and was very sore and weak when we finished. I needed help loading the boat on the van as I could not have done it if I wanted to. We waited for the awards ceremony to enjoy our first place finish and free entry into the 2016 race! 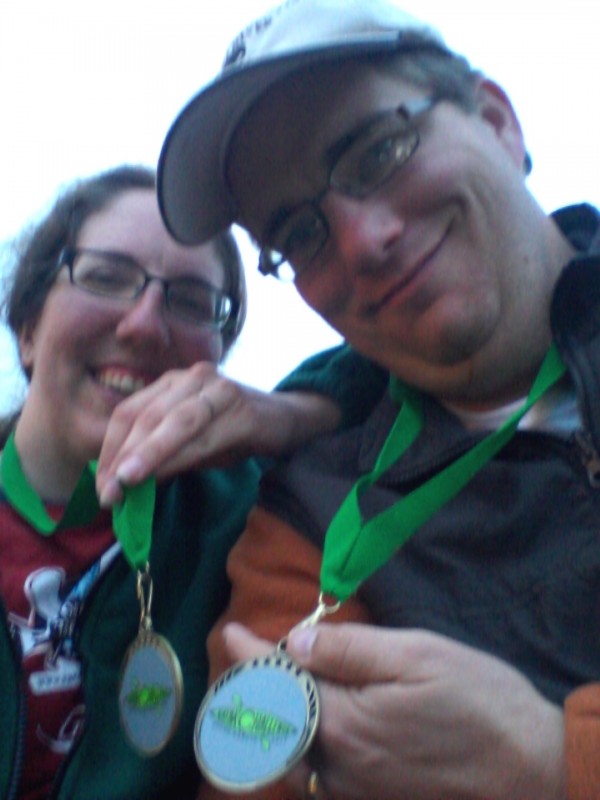 After the awards ceremony, Danelle and I took off down the road to get some distance towards home and got a hotel.

The next day we drove down Highway 30 (Lincoln Highway) through Iowa to go by some old haunts. We ended up in Des Moines and visited with Joe, Dawn, Jason, and Brandy. It was awesome seeing our good friends again in their home town. We again made some distance away from town and spent the night in Kirksville, MO.

Our last day driving home had us go through Hannibal, MO. We stopped several times at scenic outlooks to enjoy the view and time with each other. 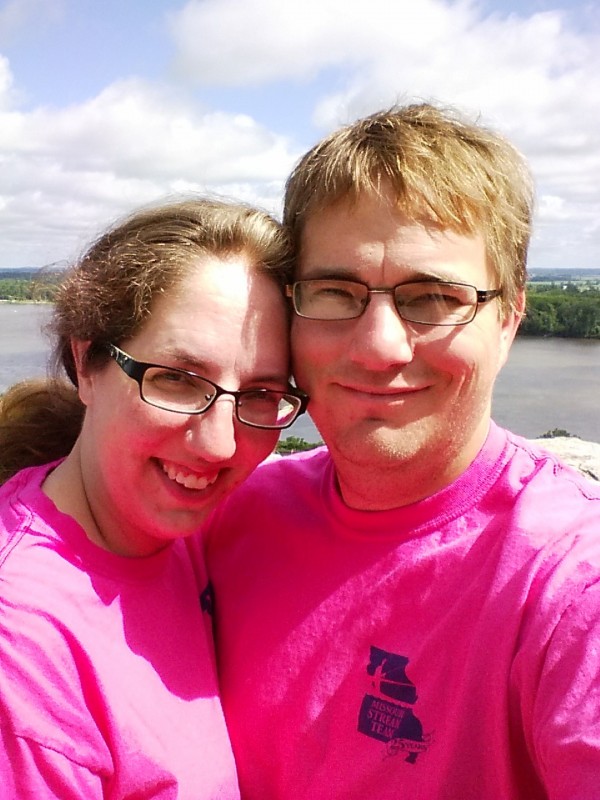 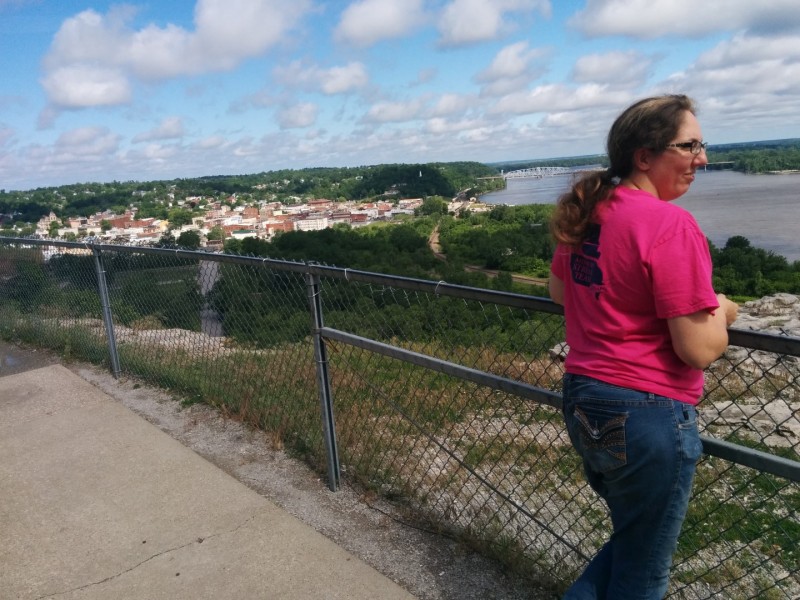 This race started on Thursday night and ended on Monday night, but felt like a week long vacation. Of course I love my wife, but this trip reminded me that I really like my wife. I enjoyed hanging out with Danelle the whole trip.We had stuff to talk about and common interests all the time.  I picked the right partner to spend my life with!

Our video of the race start to finish.