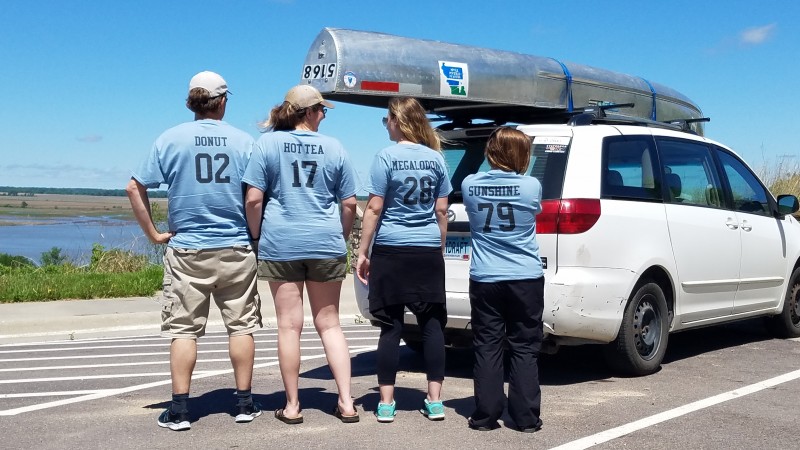 Danelle and I registered for the South Dakota Kayak Challenge for the third time (First and Second SDKC). For this trip, we decided a team would be a good choice and picked Melissa and Megan to be on our team. Melissa and Megan were new to racing, but we thought they would keep the fun level high! 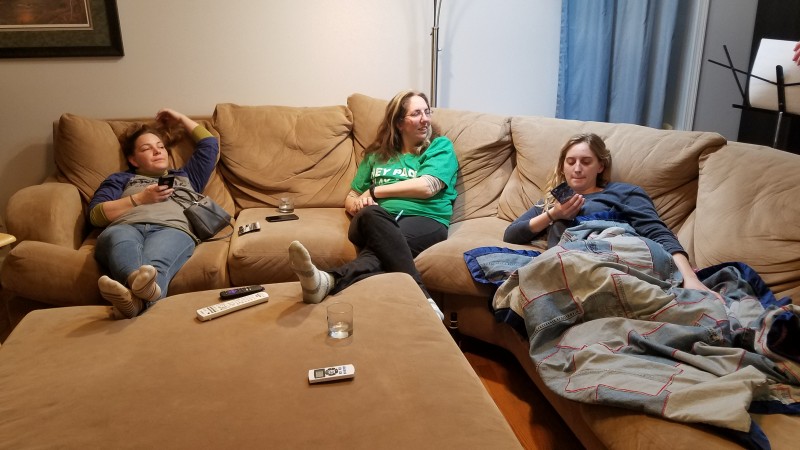 Ignoring all the lead up of training and preparation (3 big paddles on the Missouri river and a few small ones), we were ready to race. Logistics are always interesting when moving extra people that are not part of your direct family. The plan was to get to KC in shifts.

Shift 1: Hogan, Sonora, Melissa in the van with the majority of our paddling gear. We would arrive in KC on the Thursday before the race at my parents house around 8pm.
Shift 2: Danelle and Megan would take Megan’s car and start driving from St. Louis around 10 or 11 pm and get to KC in the early hours of the morning.
Shift 3: Corvin would take the Amtrak train on Friday afternoon as he had a school final (due to snow days, the school year got extended) on Friday morning.

We all eventually made it to KC and were out of the house by 6:30am Friday morning to make the drive to South Dakota. 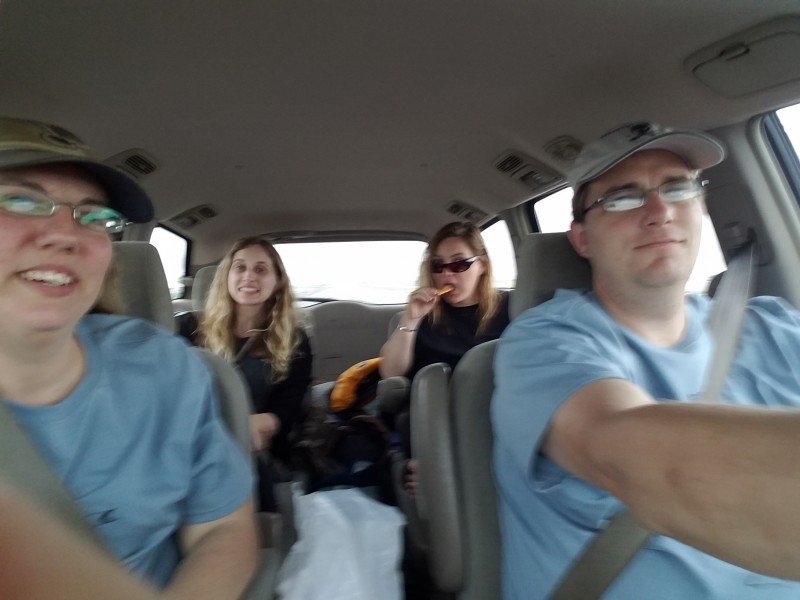 Along the Missouri/Iowa border along I-29, we saw lots of flooding of farm fields. I-29 had in fact recently been re-opened from nearly a month long closure due to flooding. There were whitecaps in farm fields and lots of exploded grain silos. 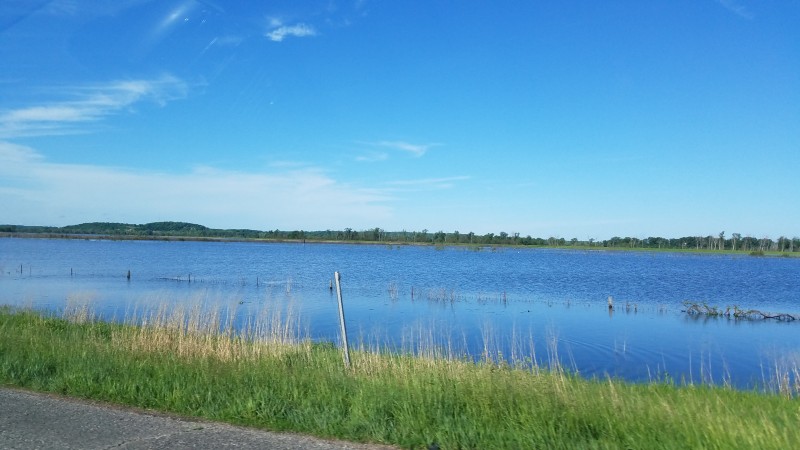 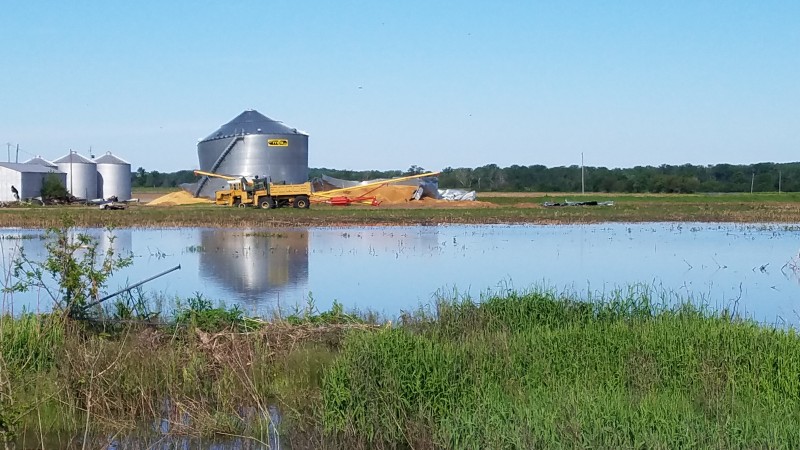 Somewhere around Omaha, Nebraska, the rain cleared up for a beautiful day. We had plenty of time as long as we stayed on schedule, there was more to do. First stop is Mullberry Bend Overlook. It is easy to get to and on the way with a great preview of part of the race course. Even on our third visit to the overlook, Danelle and I enjoyed every second of the view!

A team photo with our custom shirts.

New to the race for us this year was the need to get a permit to be on the water. Lucky for us the permit office was in Vermillion, SD. This is about 10 minutes away from the overlook. We saw Jeff Behrns (a fellow STL area racer) there also picking up his permit. The county building looked awesome, so we loitered for a bit. 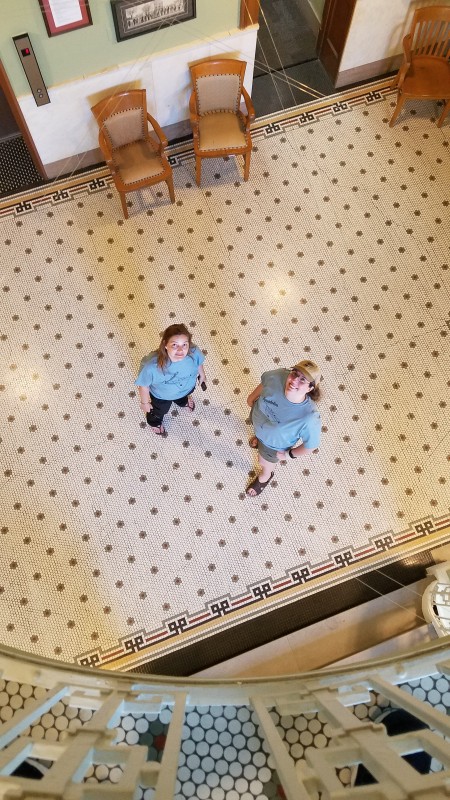 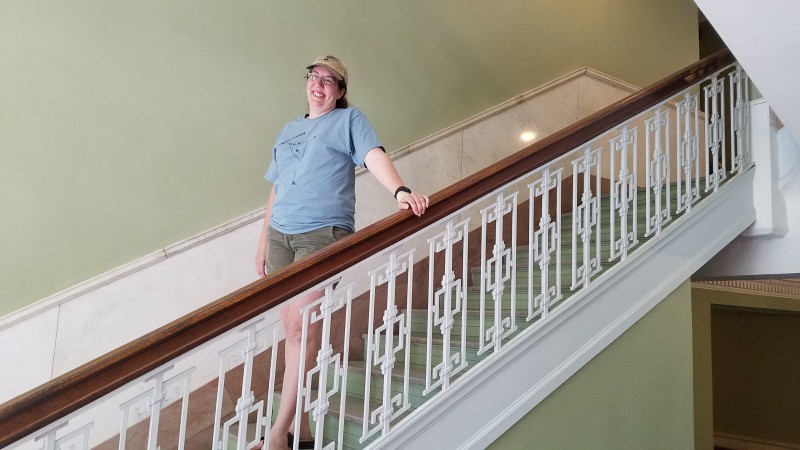 After growing up in a family that may have been famous for being late, I may have had us ahead of schedule. This afforded us time to visit Valiant Vinyards. It wasn’t a very hard decision, our team name is Aquaholics. 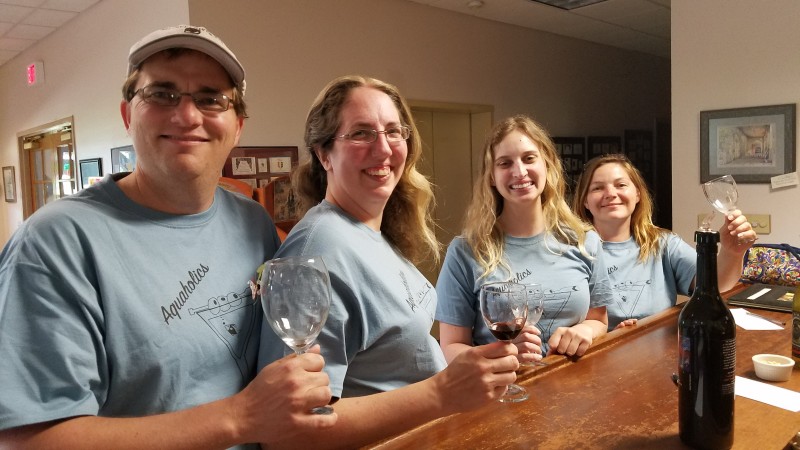 After some wine tasting and hanging out, we headed in to Yankton, SD to check into the race. Once checked in, we went to our favorite Riverfront Events Center to check into our room. The room was epic, but you’ll have to see it in the video below if you’re curious! Starving, we went to Czeckers Sports Bar & Grill to get some dinner/late lunch. We highly recommend the “Garbage Gut” Basket as an appetizer. Remember I mentioned time running out…

Before lunch was over, I walked back to the hotel while the girls ate and grabbed a shower. The girls got back as I was finishing up and we made last minute plans. We filled the van with all of the stuff that we didn’t need on the boat and I drove south to Sioux City, Nebraska for the finish line of the race. There, I picked up the bus shuttle back to the start of the race. 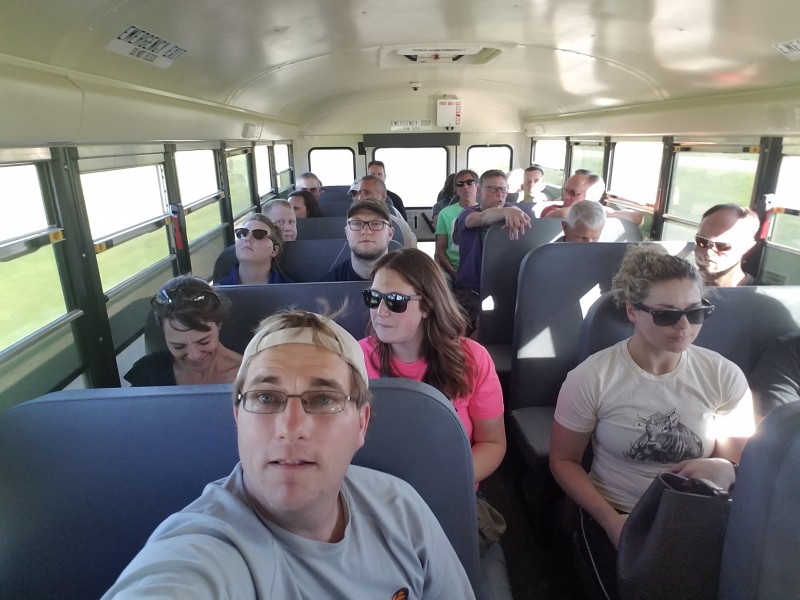 I did some napping and some chatting with familiar faces. Back at Yankton, we reviewed the competitors boats and enjoyed the safety meeting. 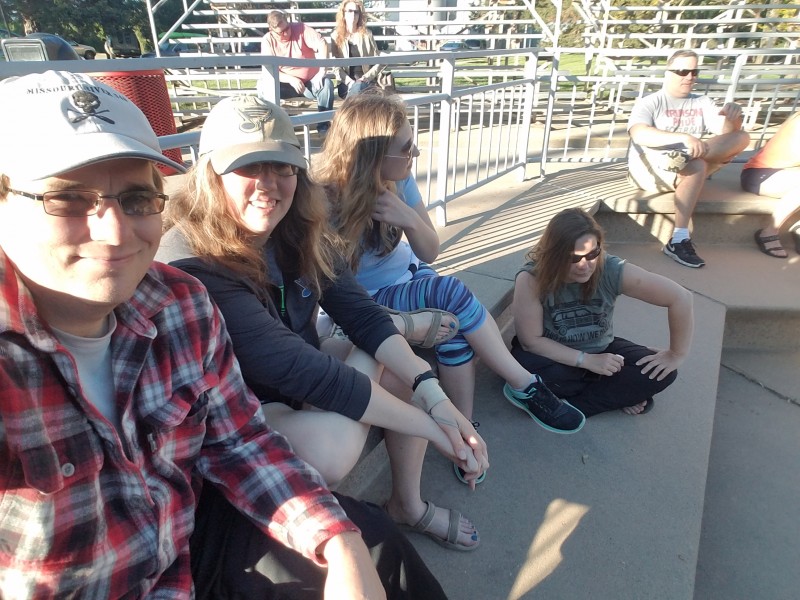 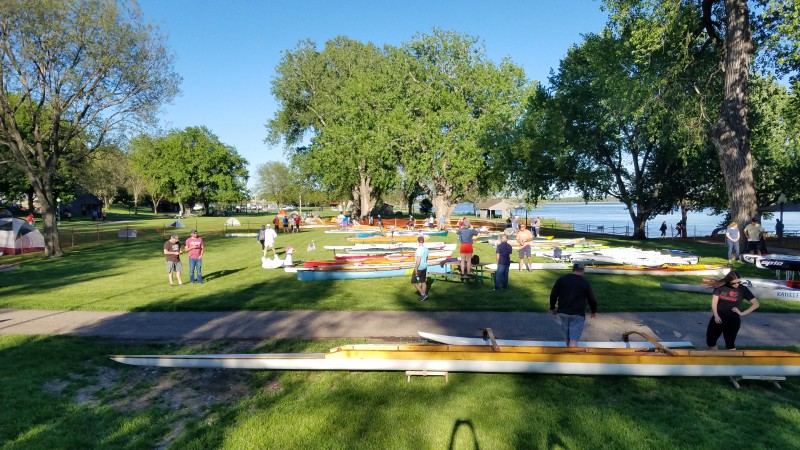 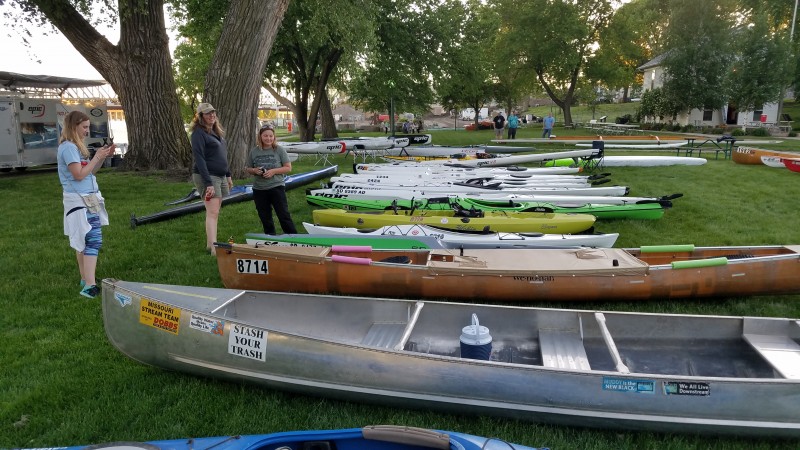 A quick walk of the nearby bridge and then to bed to get some rest before the race! 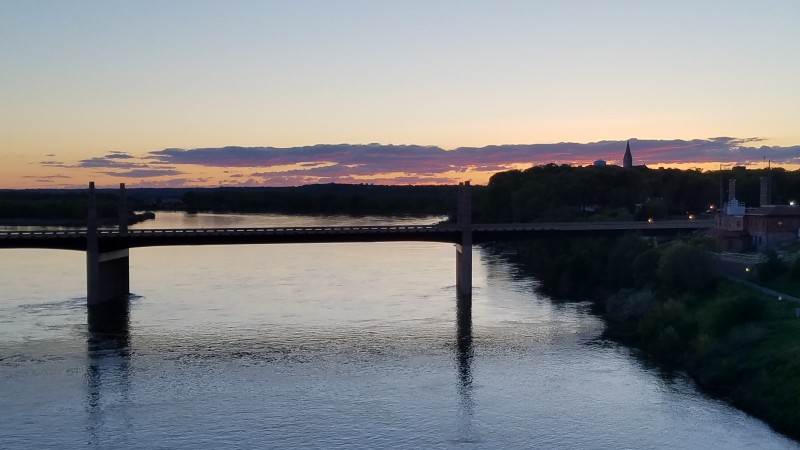 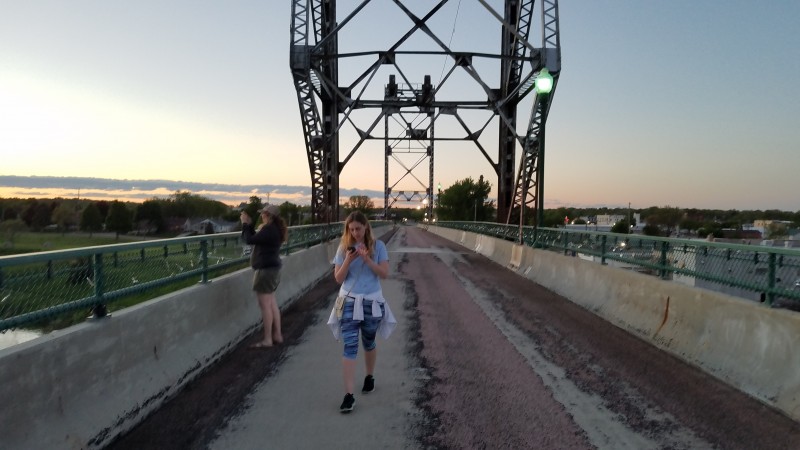 Race day came and we all got up and packed with lots of anticipation. We wanted to finish strong and didn’t know what to expect of our competition. We were in a 3 boat field and we only saw one of the other boats before the race started. It was a 5 person Hawaiian style outrigger boat with traditional paddles. When the race did start, they jumped out in front of us to our dismay.

We paddled non-stop all day. Every half hour, I would call out switch and one by one the girls would switch paddling sides from the front back to me. On the hour, each of us took a short break to eat, drink, and whatever else we needed to do to be comfortable. Both Megan and Melissa apologized to me for taking photos and video, but I very much appreciated them documenting the race for the team.

As we got near the third of 4 checkpoints, the team was starting to drag a bit. I had us do 20 stroke surges of paddling hard and counting when we looked bad and out of sync. This helped bring the tempo back. But the team was disappointed that we were stuck at a second place finish. As we rounded the third checkpoint, we saw the first place team stopped at the checkpoint. After we shouted out our boat number, they saw us and yelled something like they were coming for us. I promptly issued a 20 count to show them we meant business!

Speaking of victory, just after we crossed the finish line, something interesting happened. About 100 yards after the finish line is the 90 degree turn into a cove to pull out. Just before the turn, an Asian Carp jumped into the boat at the second position. Watch the video below and see Melissa’s reaction to the fish, I promise its worth it!

The volunteer below pulled the fish out of the boat and threw him back in the water to jump another day. 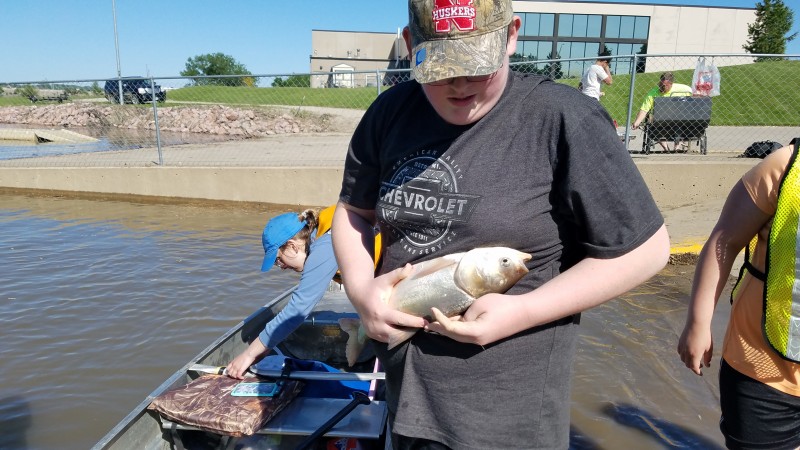 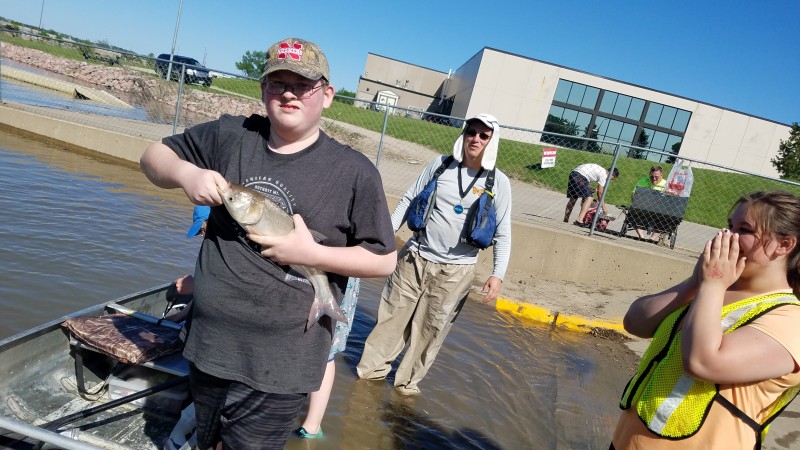 After loading the boat, the team decided to share a hotel room one more night at the host hotel. The boat was loaded up and our clean bags were drug up to the room for one more night. But first, the awards ceremony.

Right to left, Bill Behrns, and his son Jeff Behrns. 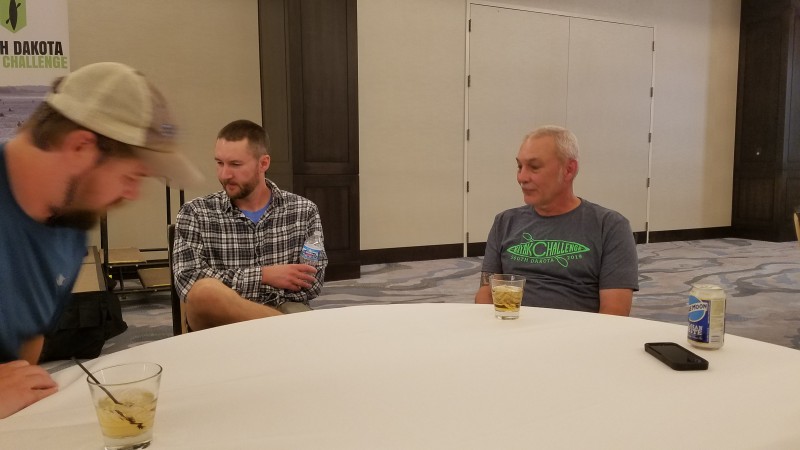 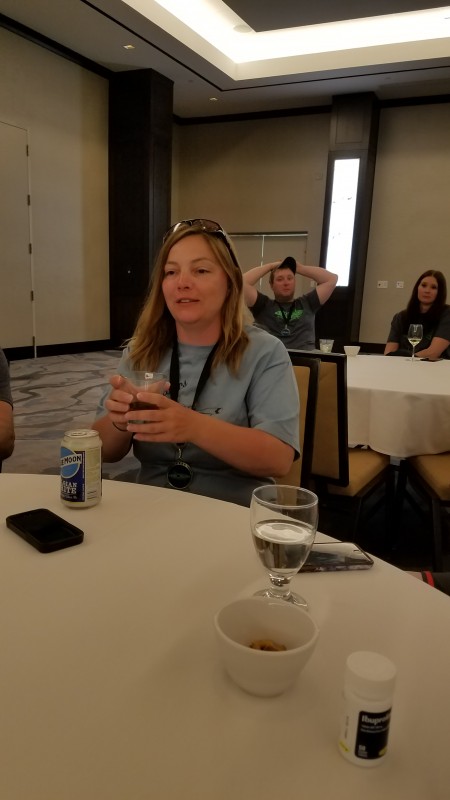 Megan and Danelle enjoying their trophies! 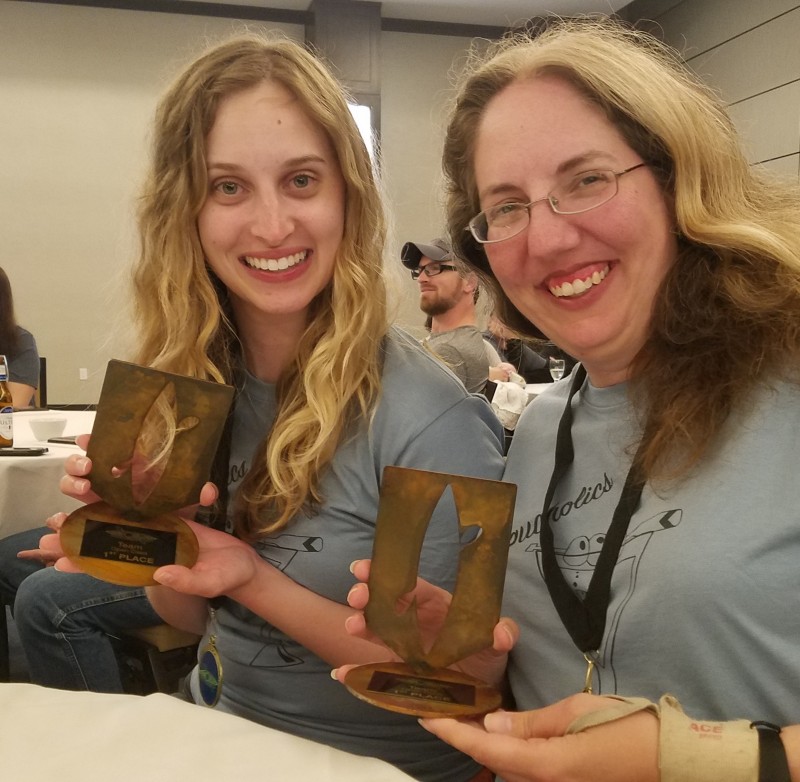 What an amazing race with fantastic people. Talk about the perfect way to kick off the summer!