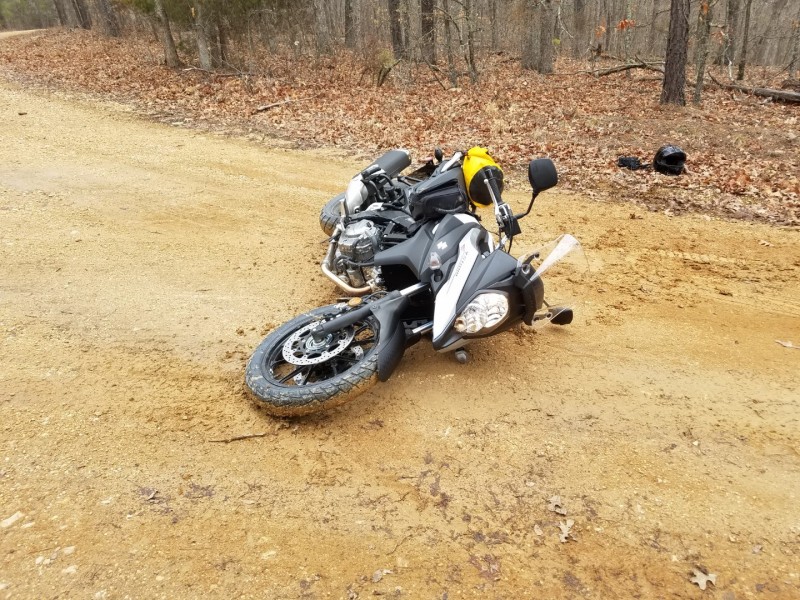 I’ve been reading about adventure riding and hoping to get this type of bike for a while now. One of the rides I read about was the Missouri Swinging Bridges ride. Its an annual ride through back roads in Missouri and goes over very old swinging bridges. I had downloaded the tracks and been over them a few times on Google Earth thinking about riding them.

It didn’t take long for me to take my new WeeStrom out on its first adventure ride.Danelle and the kids went to Dallas Texas for spring break, but I didn’t have enough time off of work. So I took the Wee out for a ride. This was also good because I needed to get more break in miles on the bike.

So I set off on a cold Saturday morning by myself hoping to get some distance in. It didn’t take long before I was freezing on the highway and re-thinking my plans for the day. I re-routed to a non interstate highway to have slower speeds and try to keep warm. That helped and I rode around ending up at our property, Waterfall. I decided to try and continue on and see what happened. Along the way, I went through some mud at George Winter park and got the bike its first taste of dirt. 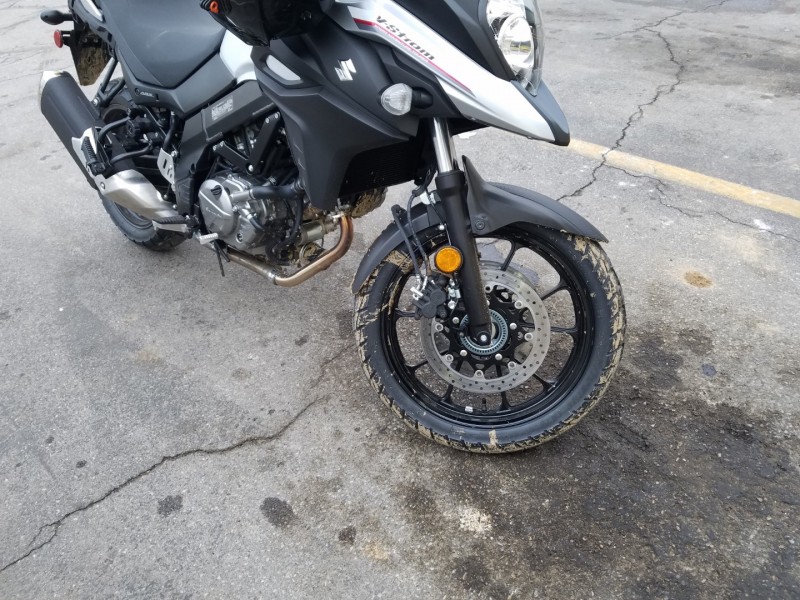 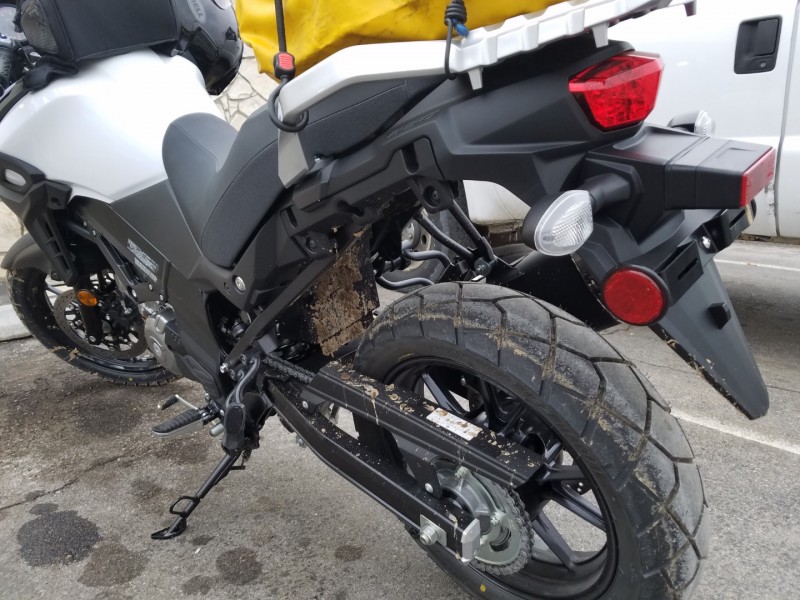 You can laugh at how little dirt there is, but I have street tires and the bike has less than 300 miles on it!

So I finally put on my 1 piece rain suit and started to warm up quickly. I found the start of some tracks near St. Clair, MO near Highway 47 and Highway 30. I blindly followed the GPS tracks everywhere I could. Eventually, I ended up in the Mark Twain Forrest on some seriously deserted and remote roads.

Around this time, I saw more vehicles and yellow tape blocking off several side routes. My tracks went through some taped off lane and I had no idea where I was. I was going to go under them, but by the time I turned around, the only other car I had seen had done it as well, so I just followed along.

Again, not knowing where I was, I nearly missed a turn and pushed the handlebars to make it. Only the mud was very slick and my tires didn’t grab… 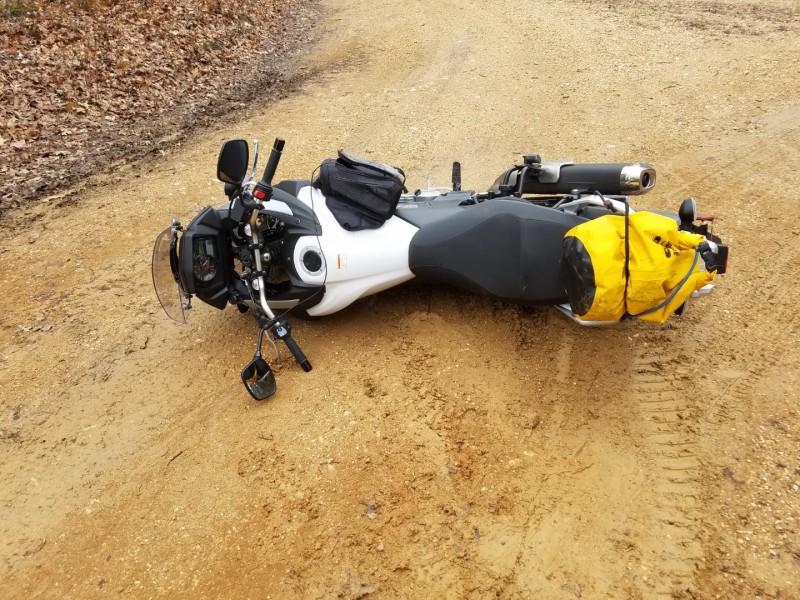 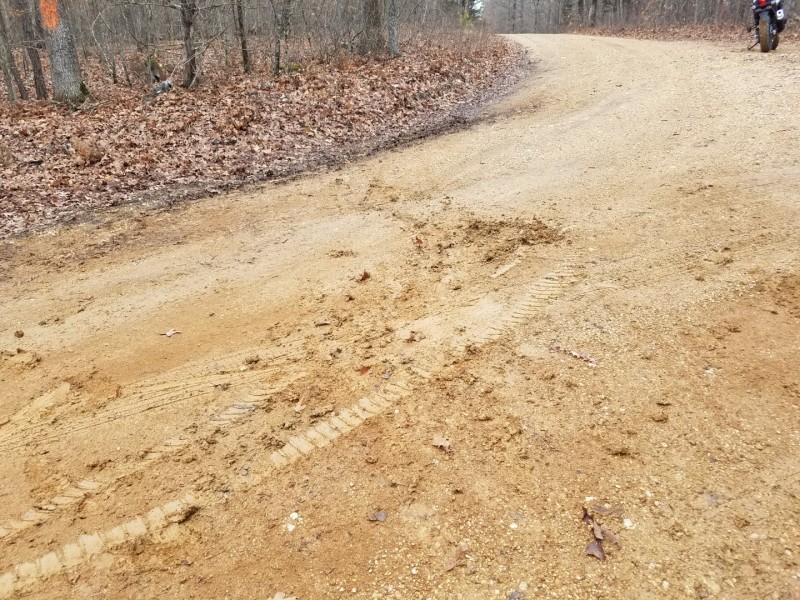 I was fortunate that I wasn’t hurt and the bike didn’t suffer any mechanical issues from the fall. I had around 300 total miles on the bike when this happened. I also had a skid plate and engine guards ordered, but not before the first fall.

When I finally got out to a paved road, there were some cars there and more of that darn yellow tape. Turns out there was a rally race that day called the Hundred Acre Woods. I was very fortunate that when I fell I wasn’t on the race track. It scared me enough that I was done riding for the day. So I looked at the GPS and realized I was close to the MWA Whitewater championships that was on the same day. I have many paddling friends.

So I went there and met several friends and ended up hanging out with Cindy, JoJo (the river wife), and her lovely sister Jan. It was the perfect end to an adventurous day! 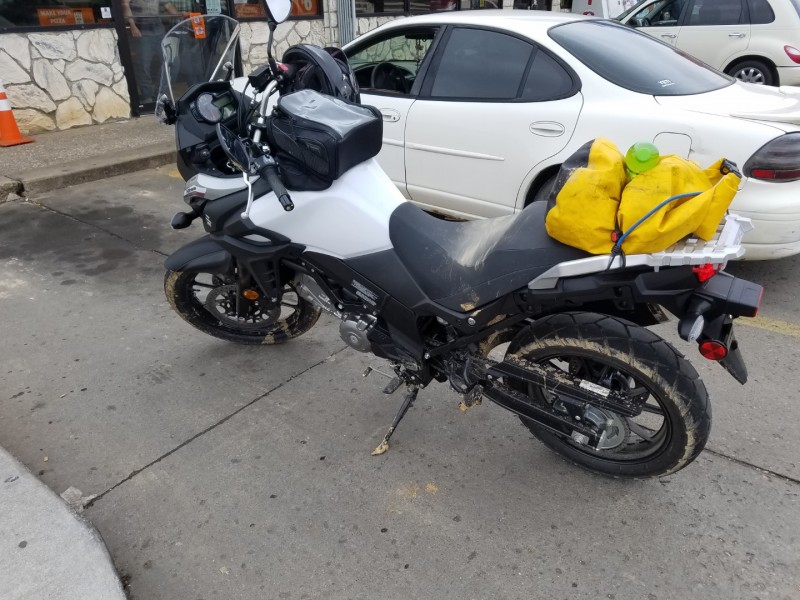