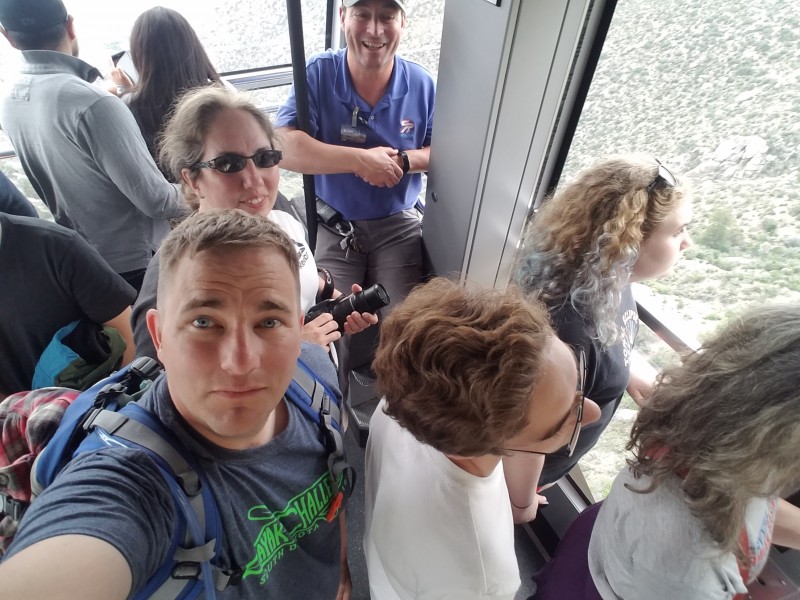 Today was looking up. We partly cloudy skies and a full parking lot of people escaping the rain the night before. It wasn’t much of a drive before we made it to the New Mexico border. It almost seems like they were worried you might miss the state border… 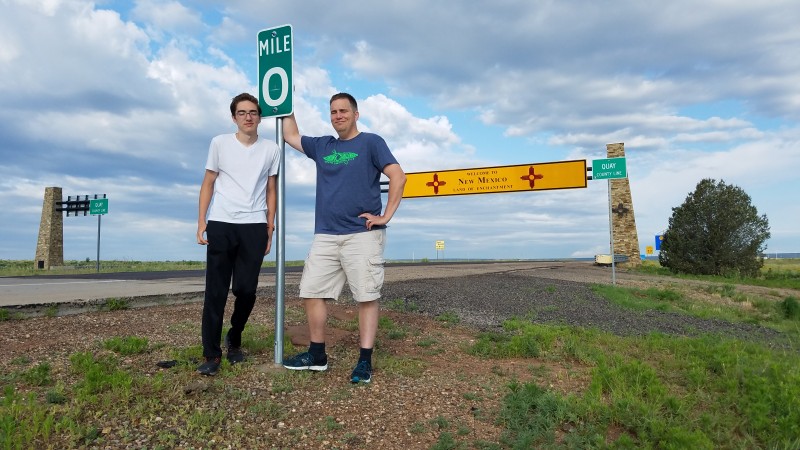 With the border out of the way, we headed to Tucamari, NM where we would unicycle for New Mexico. You can read about the unicycle portion of the trip on a different post. What I want to focus on is Tucamari. This feels like a dying town that got passed up by the interstate highway. Its part of historic Route 66. If I didn’t know better, it was the setting for an old Pixar movie.

You might be wondering why we went to this town if its dying. The answer is that they are known for their murals. Last I checked, there are 33 of them. If you’re lucky, you’ll find the mural telling you where all of the others are. Here are a few that we saw! 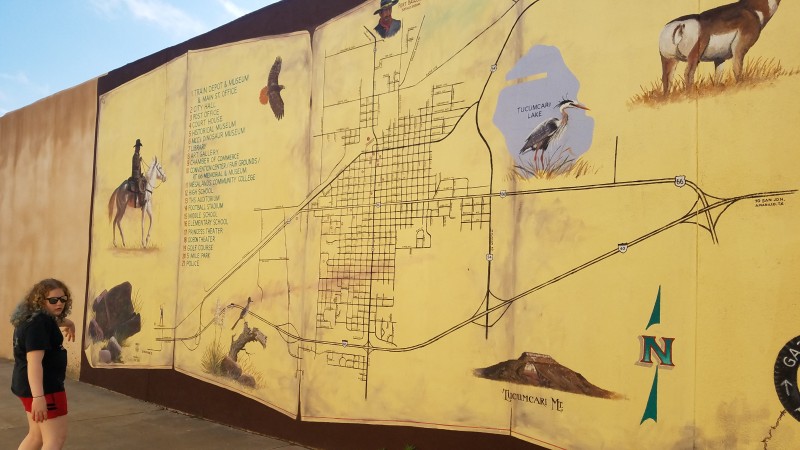 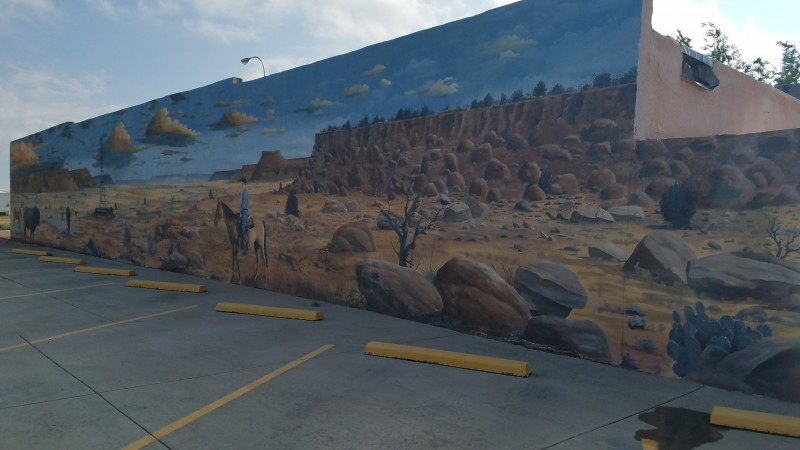 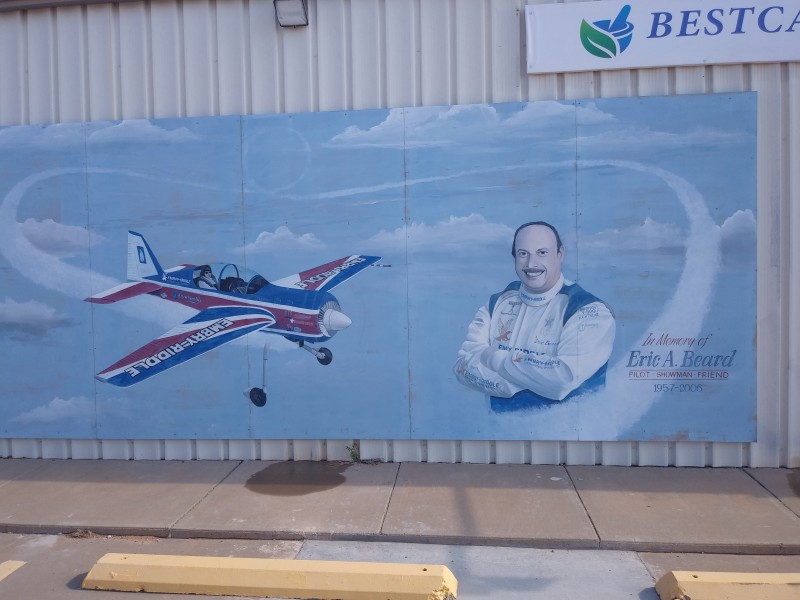 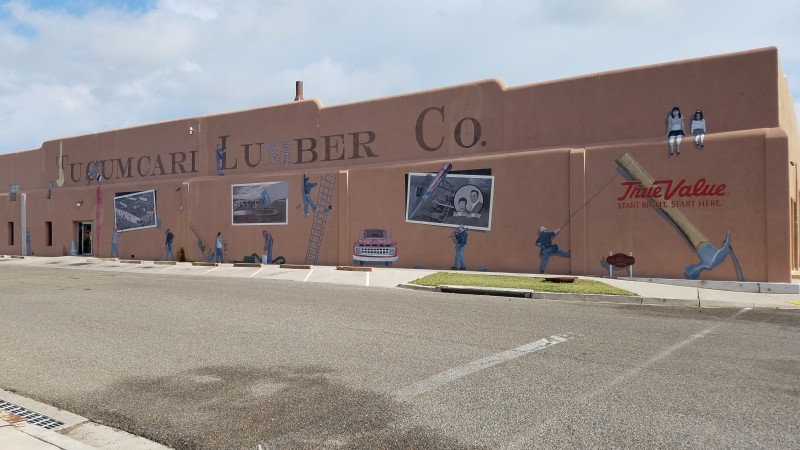 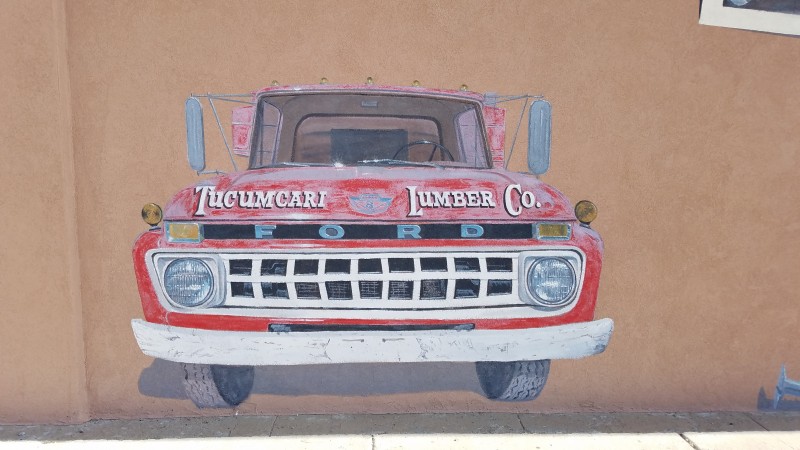 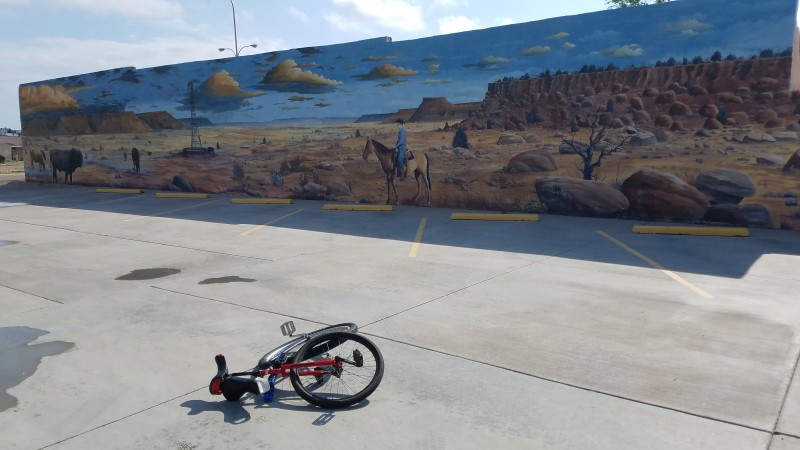 Eventually, we saw as many murals as we were going to see and decided to strike off for our next destination. We hopped back on the interstate and headed to Albuquerque, NM. While driving there, Sonora made the mistake of asking me how to spell Albuquerque. I told her to hang on, I would play a song for her that spelled it for her. That song is Weird Al’s Albuquerque! If you’re not familiar with it, its a 12 minute song telling a long story. At the end, he [mostly] spells Albuquerque. The kids were not too sure about the song and gave me strange looks during the whole song. Later in the vacation, this would become our theme song with the kids playing it once a day and laughing!

We arrived in Albuquerque in early afternoon and headed to this day’s main attraction. I knew it would be a bit expensive, but worth every penny. When we arrived at the Sandia Peak Tramway, the kids were in awe. They had seen mountains as we drove towards them, but now they were going to interact with them. Before we left the van to get tickets, we switched into hiking boots and I packed what extra clothes I could into my water backpack. The kids had no idea how cold it would get at the top. 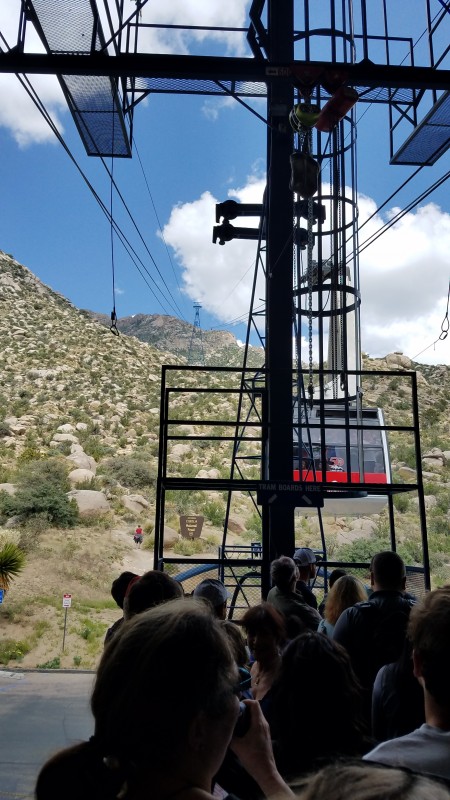 It didn’t take long before we were up on top with a fantastic view of everything! 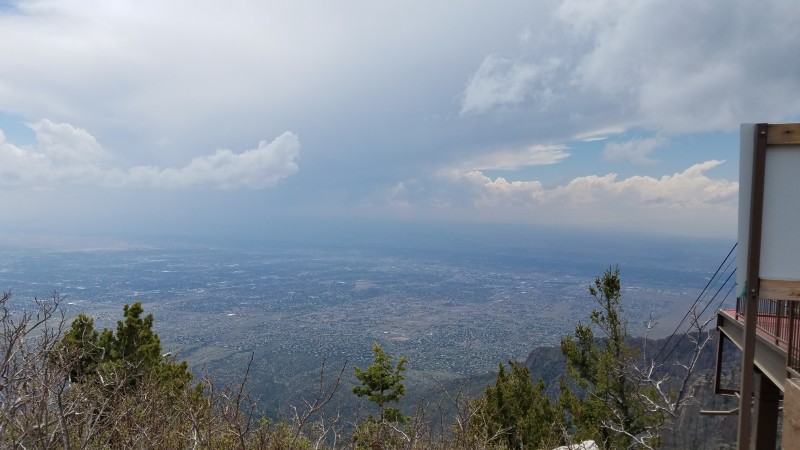 Sonora was getting lightheaded and didn’t want to hike once we got to the top. There is an interesting stone cabin built about a mile away from the top of the tramway. Corvin and Danelle took off to see it while I hung out with Sonora.

Sonora and hung out and made jokes together and I got her to slowly hike at her pace out a bit down the trail. 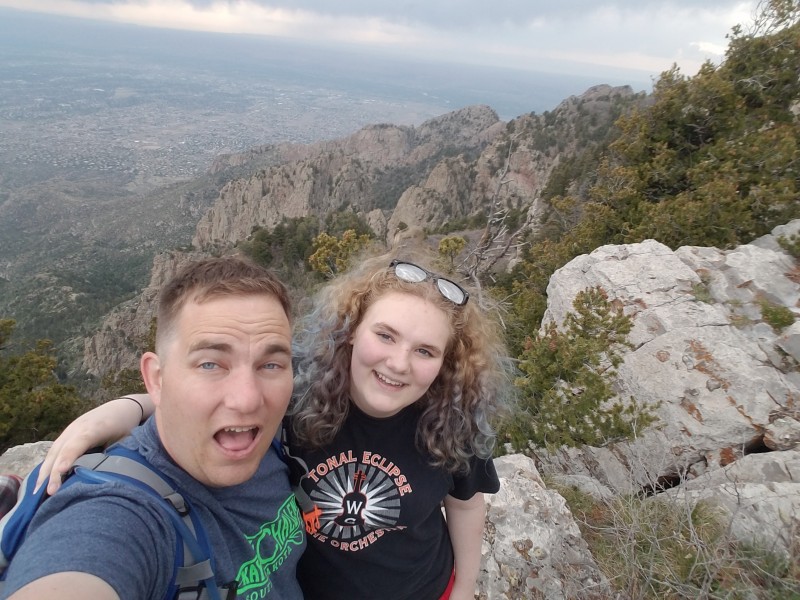 Meanwhile, Danelle was trying to satisfy Corvin’s thirst for danger with this compromise to get to the edge. 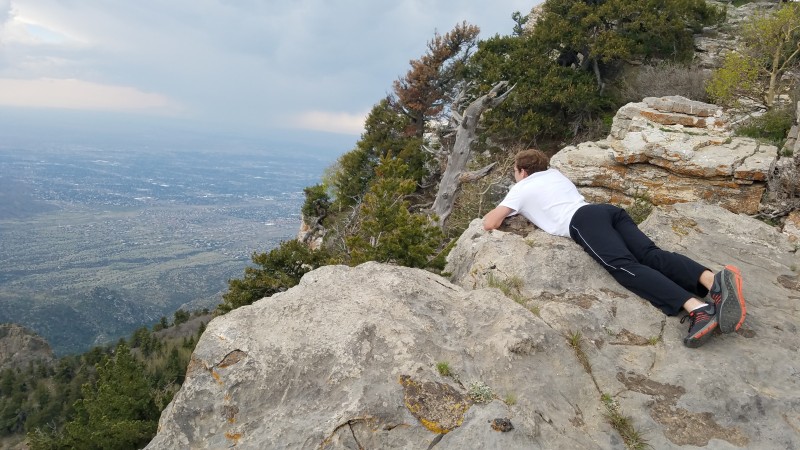 They made it to the cabin and got photos. 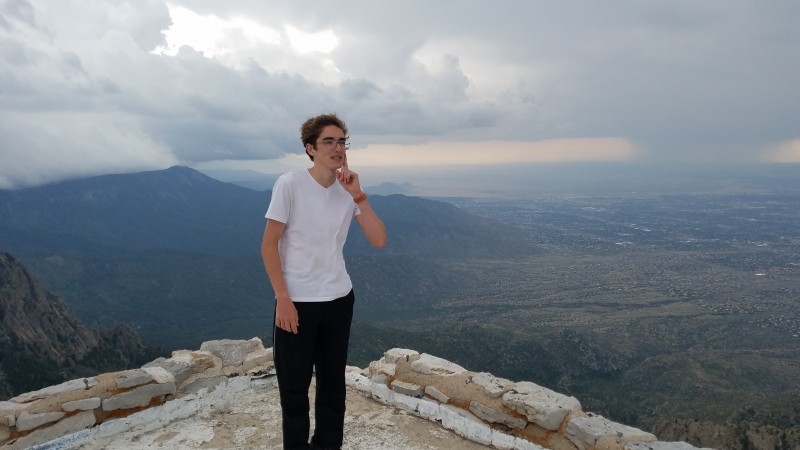 It took lots of convincing on my end, but Sonora and I eventually struck out and did the same hike about 45 minutes later. We met about 1/2 mile from the top, but couldn’t convince them to come back to the top with us again. 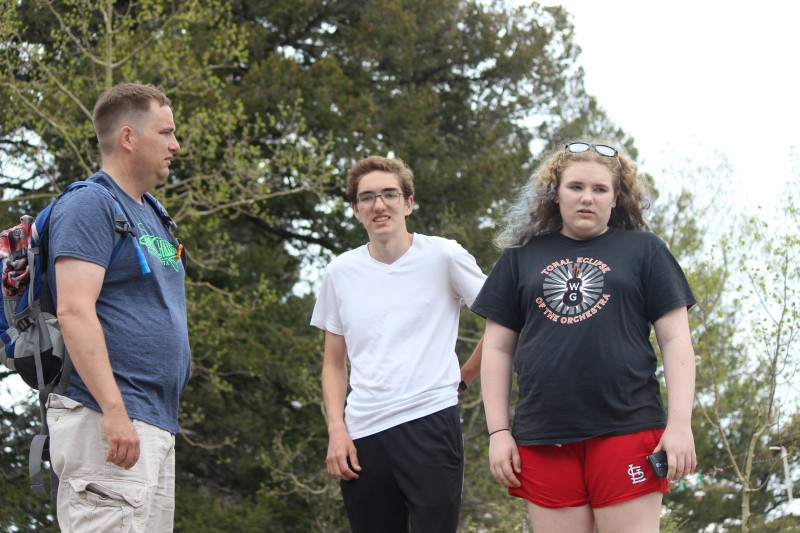 At the very top, I’m pretty sure we saw some tiny amounts of snow or hail. Sonora got my flannel shirt cause she was freezing! 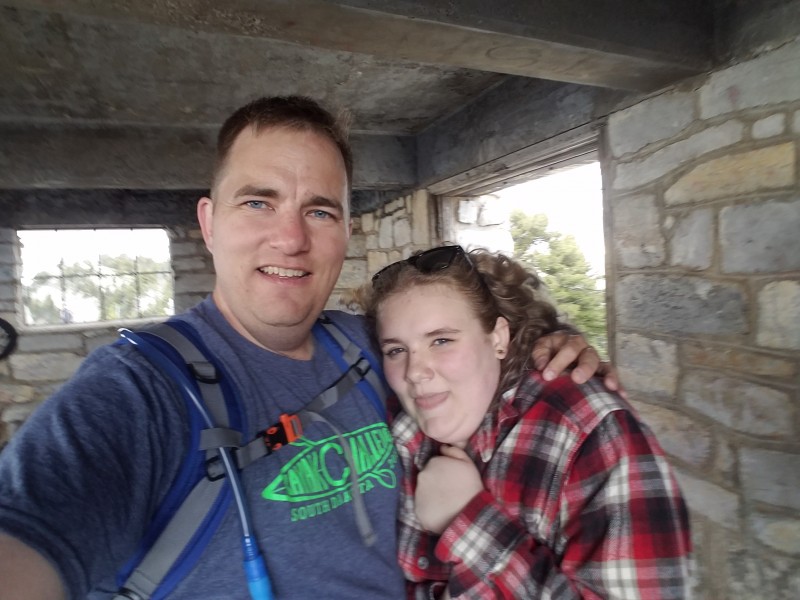 How about an 11 minute tram ride sped up to 26 seconds!

After we got back down to the parking lot, we found the Fairfield Marriott where we were staying for the night. We took turns between the pool, hot tub, and sauna. Talk about a perfect day!