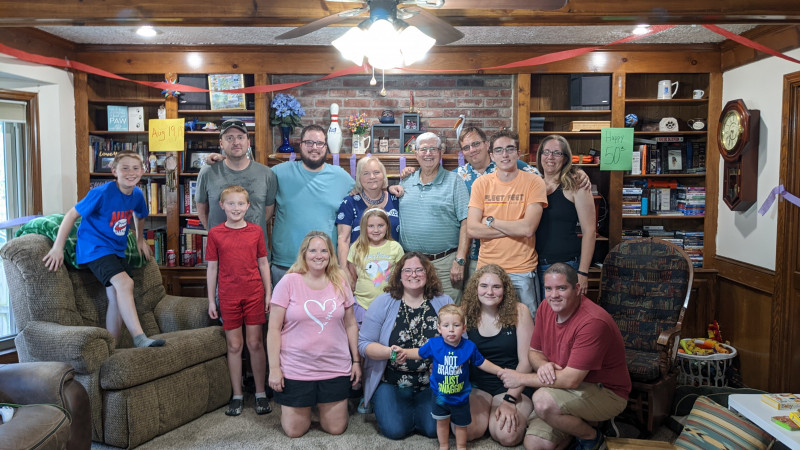 50 years ago [yesterday], my parents were married. They are celebrating 50 years of being together. They planned a grand adventure for kids and grand kids, but COVID got in the way of their plans. Even with the huge list of friends, co-workers, and extended family, they skipped the traditional large party. They opted to have a much smaller gathering of kids and grand kids at their house. Here is how it unfolded from our perspective.

Remember that just two days ago, Coty arrived from Argentina. We warned her in communication leading up to her arrival that this was something that we couldn’t miss. Instead of leaving Friday night for a longer weekend like we usually do, we opted to leave Saturday morning early to give her as long of a break as possible before a four hour car journey.

During the drive, I played a game where I would sit up in the driver’s seat and look left, then right, then middle, then go back to my normal height. I thought of it in my head as a baby bird looking for mom. Then after I did that, Sonora and Coty would mimic my movement in the back seat. This made all of us laugh. 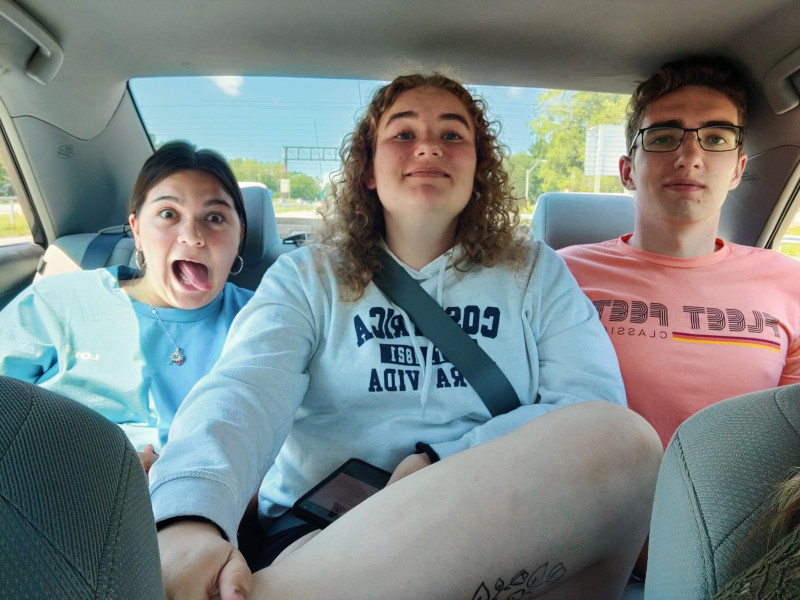 The kids had a lovely conversation in the back getting to know each other. Coty was testing the depth of Corvin and Sonora’s Spanish skills and sharing music. It was a tight fit, but not too long of a drive that they dealt with it well.

We arrived in Kansas City about 30 minutes earlier than we needed to. The fancy event we were doing is going to a movie. But not just any movie. My parents rented a movie theater and dad was paying for concessions. Once we all arrived, we went into the theater and the madness began. Beyond being happy to see everybody, we started the huge concession order.

Dad said that they have never had a concession bill that high before. I believe he spend around $200 for all the candy, soda, popcorn for everybody. Then into the theater we went to watch the original Lego Movie. It was really fun having the theater to ourselves and knowing everybody around me. Dad had never seen the movie before and his laughter filled the room. After the movie you could hear him saying “Honey, where are my pants?”.

Herman’s son, Easton, was a bit fussy during the movie. I’ve seen it before and I really like little kids, so I took him and played silently for a while to help out. After the movie, we all caravan-ed back to my parents to hang out for the rest of the day. Later, dad and I would go to Olive Garden and pick up a large to go order to feed our large group.

Holly (and maybe others) did a wonderful job decorating my parents house before the event. The signs they made were perfect! 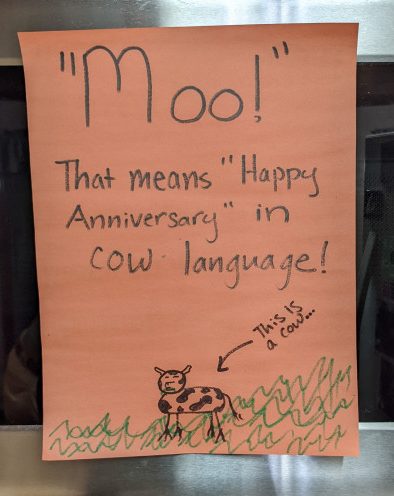 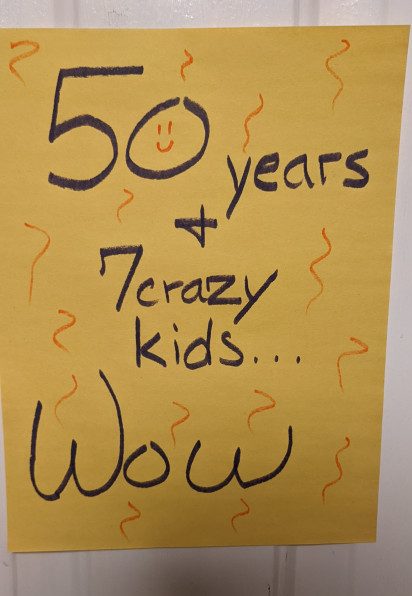 We spent lots of time playing with Easton. Coty jumped right in being part of the family! 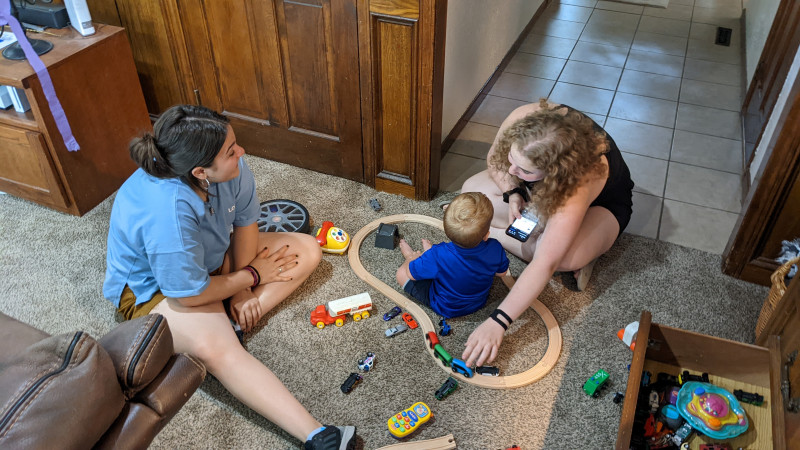 Henry, Holly, and Jim. I received a nice note from Jim after the weekend explaining that they were standoffish on Saturday cause they have been a little under the weather and didn’t want to get anybody sick. Hopefully we’ll get to catch up more next time we’re in town. 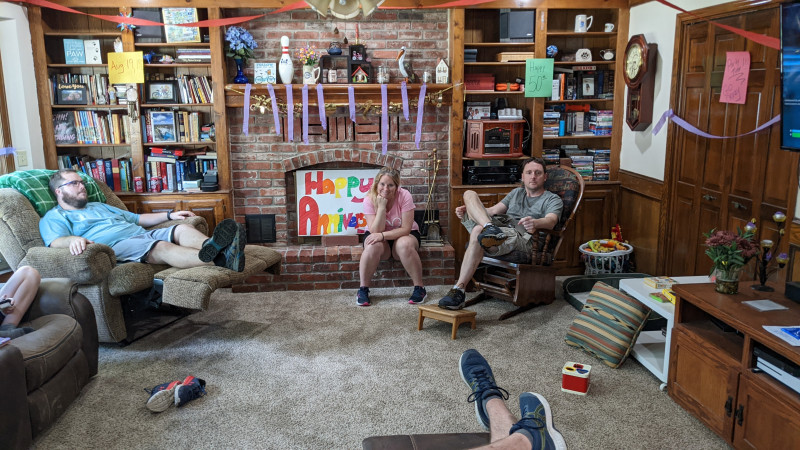 Hanging out with Corvin. 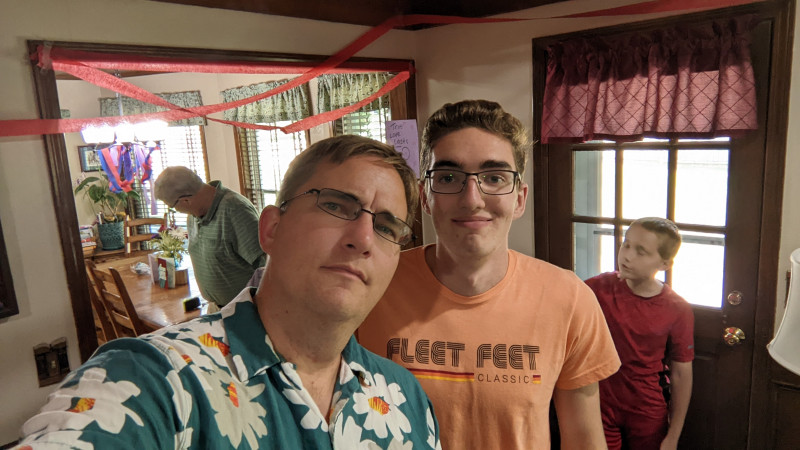 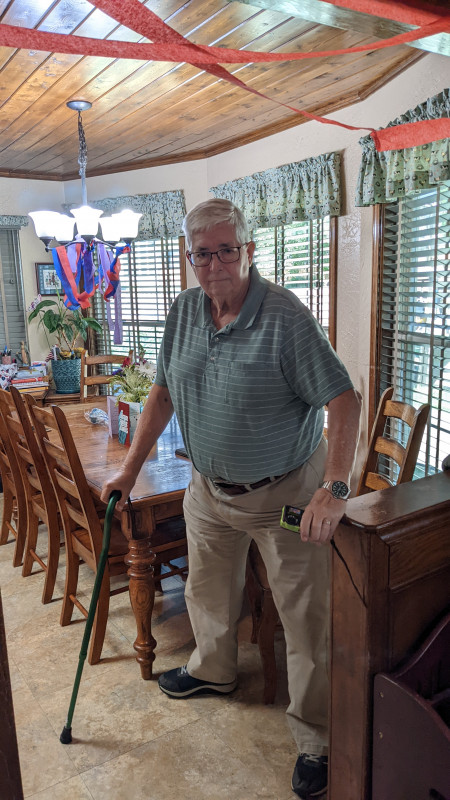 Hannah and Danelle hang out like they are sisters! 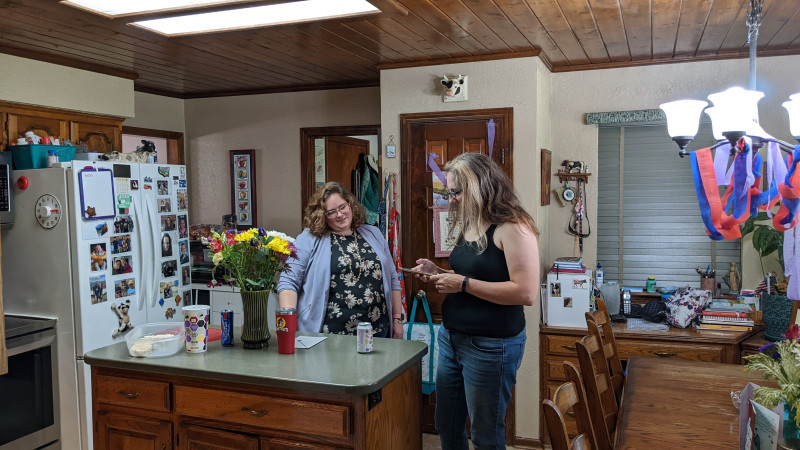 A photo with all of the available grandkids at the party. First missing: Brian, Zach, Phillip, Michaela, Sean.

Also sad that Hayden and family couldn’t make it to the party from Mississippi. 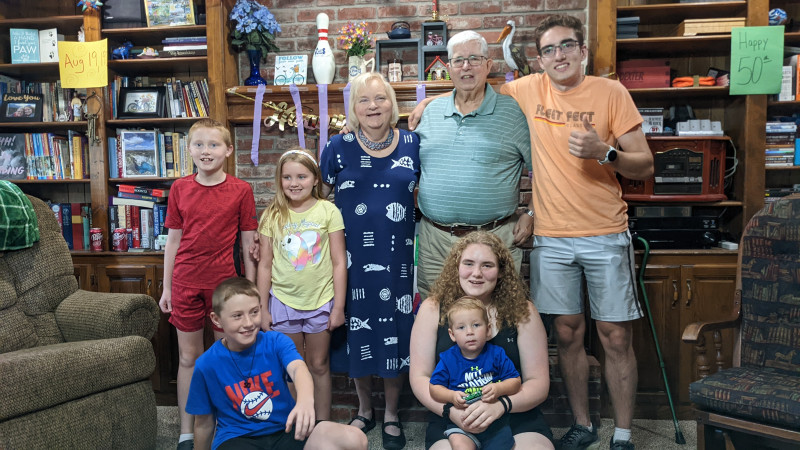 And a photo of all of us at the time.

We were lucky to have Coty there to take the pictures. None of us had considered a tripod that would have been needed if she wasn’t there.

And not at all surprising was the back rub line. 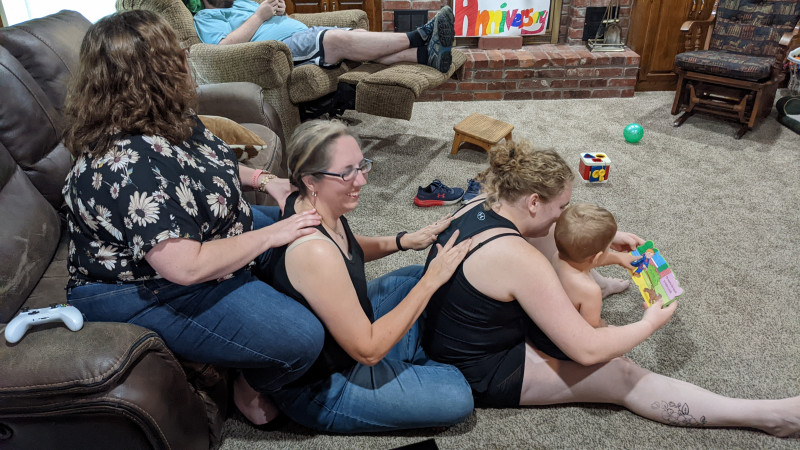 It also happened to be Eason’s birthday, so he celebrated with a few presents. 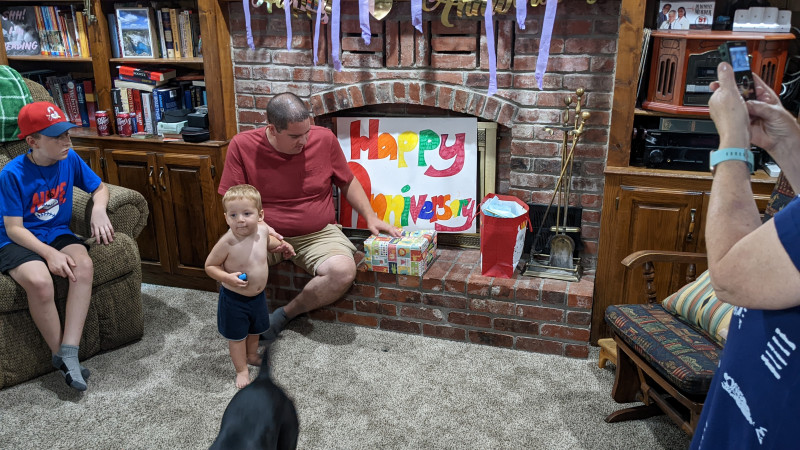 Hiatt was able to show up later in the evening, but Kris and Rylan couldn’t make it. 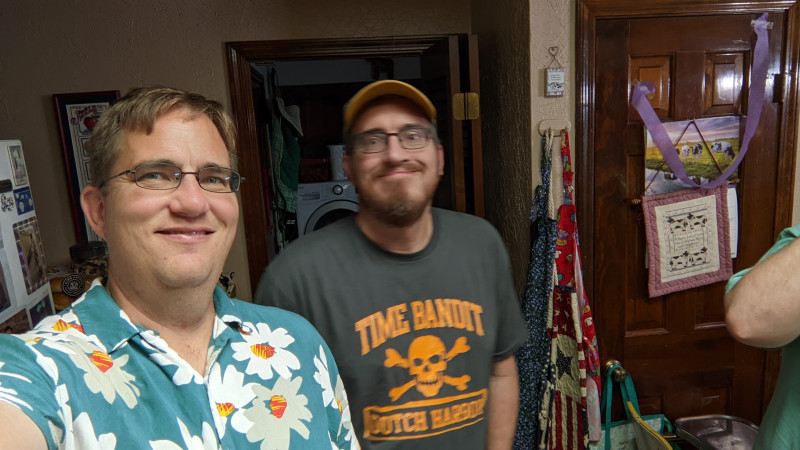 And it wouldn’t be a family event if we didn’t spend some time working on cars. Herman had a slow leak in one of his tires. Henry offered to fix it and I supervised. Eventually they listened to me and lowered the pressure in the tire and it made it easy to finish fixing it. All told about 30 minutes of work and one patched tire later, we were back in the party. 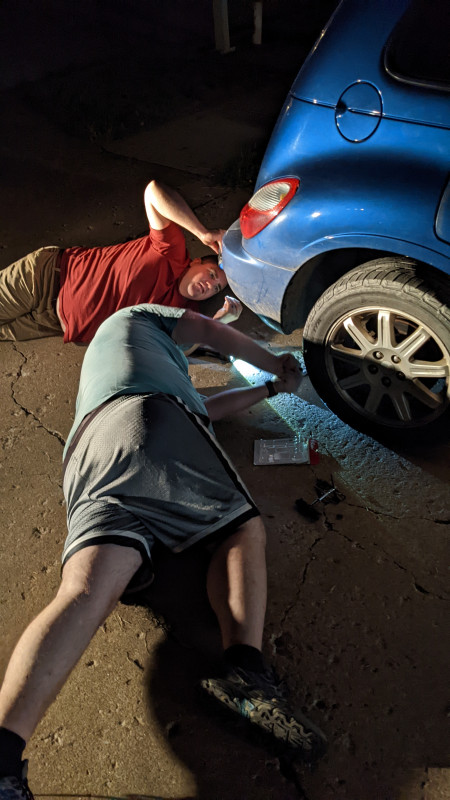 Sunday, we headed out at lunch time. We wanted the girls to have a bit of time at the house before starting school the next day. But first we treated Coty to Fritz’s restaurant. Its a train themed restaurant that delivers your food via a model train on the ceiling. 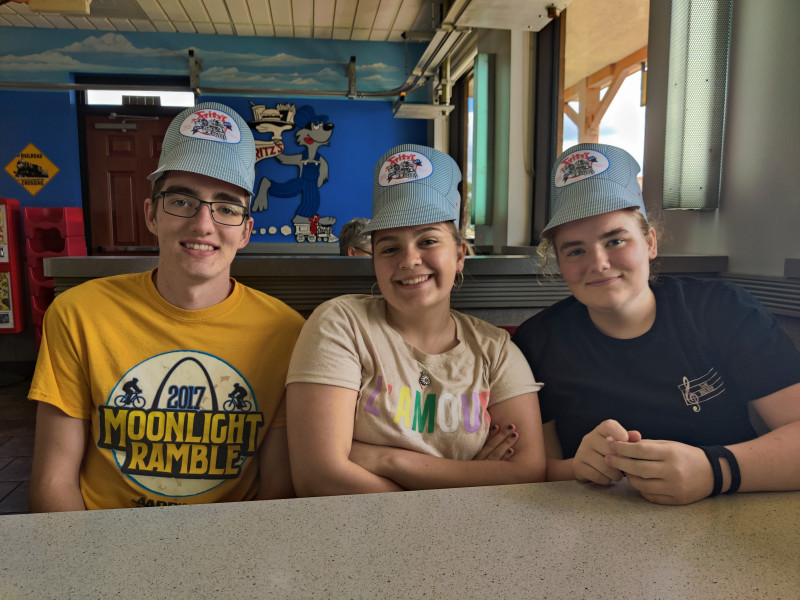 My parents in a selfie of our table. 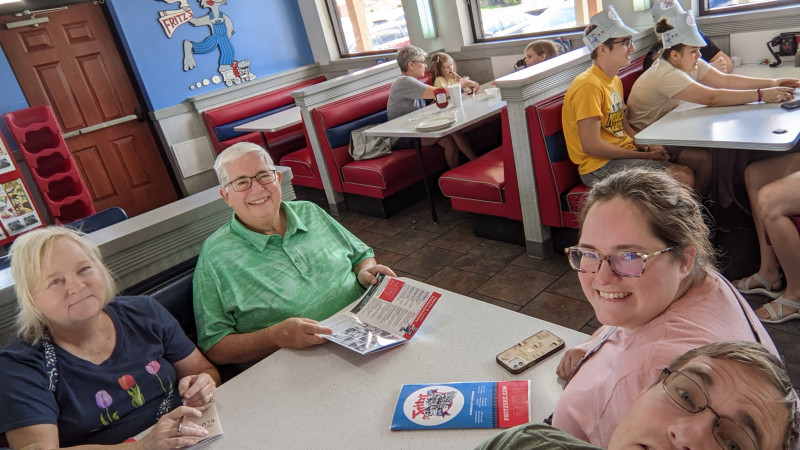 All too quickly the weekend was over and we had to say goodbye and head back to St. Louis. It was fantastic celebrating my parents.