Danelle thought the idea was interesting, but suggested that we consider somebody with a Spanish speaking background. Danelle, Corvin, and Sonora have backgrounds in Spanish. Me, I’m just the typical lazy American that knows some English and random German words when my high school forced me to study it. But I digress.

Danelle didn’t let the thought go completely, but it wasn’t something that we talked about much. Then she saw a notice on Facebook a post in about getting an exchange student. Just out of curiosity, Danelle reached out and ended up talking with Julie from CETUSA. Julie works for CETUSA placing exchange students in the St. Louis area. She sent Danelle lots of information.

I don’t really remember being involved in any of the early discussions cause I didn’t think they were very serious. I don’t object, but wasn’t jumping at the opportunity either. I realized it was serious when Danelle and Sonora were looking at lists of prospective exchange students that would come to our house.

We had a list of six students and their backgrounds. Of the six, we all agreed on one student after reading all of the profiles. Once Julie found out, we received a large packet with a full dossier on  Coty. It started off very interesting with a welcome letter and then got creepy. The dossier contained her medical background, weight, and some body measurements. I wasn’t really sure what I was getting into now. Then it went back to a letter from her parents talking about what the experience would be for her.

Okay, I also admit that her name was the only one I could repeat out loud without sounding extra stupid!

So a short family talk and it was decided that we would “shop”, “purchase”, “request” Coty???  If we were going to have an exchange student, she sounded like the perfect addition to our family. Ohh, did I mention addition, this wasn’t any silly 2 week visit. This was for THE WHOLE SCHOOL YEAR!!! Accepting her into our home would be a full year commitment. What could I say but yes.

Corvin was going away to college for his first year and Coty could have his room for the year. He knew and understood that he would be kicked out of his room when she got here since he had a foot out the door anyway. He complained to his friends, but was cool with us about the whole thing.

Of course all of that seemed moot because we couldn’t get confirmation that Coty was actually going to join us. School kept inching closer and there was one piece of paperwork after another. We finally got all the paperwork done and were just waiting for confirmation of her flight to St. Louis. The days continued on and school was nearly ready to start. I started to think all the build up was for nothing. Then we finally got Coty’s flight information. For the first time it was 100% real!

A few days before, we officially moved Corvin out of his room and cleaned it up. Then the day finally arrived. Coty had been communicating via WhatsApp to Danelle occasionally during the lead up. She let us know when her flight reached Dallas, TX and was officially in the USA. From there she had one more flight to St. Louis.

We made a casual drive to the airport knowing that flights never arrive or empty fast. We were in the parking lot about 20 minutes before the flight was to arrive. Julie from CETUS called and asked if we were coming to meet her at the airport. Julie personally greets every student that comes into St. Louis. We explained that we were parking and would be inside shortly.

Once inside, we found Julie. Coty messaged when she was on the ground and the excitement built. Naturally, we made signs for her to recognize us in the airport. As each group of people walked out of the secured area to the baggage claim, we wondered if Coty would be among them. Of course, that turned into a game and I would tell Sonora, “I see her!” when I was sure nobody coming through could be her.

Danelle sent Coty a selfie of the family to help her know how to find us. Finally to all our excitement, the moment came and the sweetest shy girl came walking down and straight to us and our signs. I can only imagine how brave and scared she must be to take this step away from her family for this learning experience! Danelle got the first long hug and then me.

If you follow this blog at all you might be thinking, this is the most he has ever written without a photo. Well I’m not going to let you down. The photo below is the only one from the airport that I have but I’m sure there were more taken. Its Julie from CETUS with Coty. We’re grateful that Julie helped place Coty in our home! 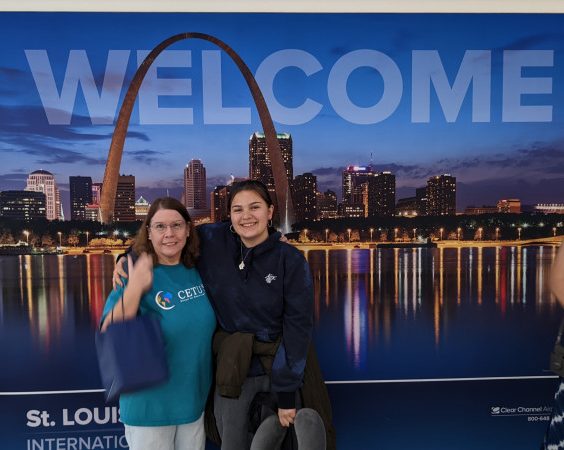 We walked back to the car together asking introduction type questions to get to know each other better. Silly stuff like how far it is to our house. This was all a bit overwhelming to Coty as the town she grew up in was smaller than the Dallas airport.

Back at the house, we showed her the room she would be staying in for her visit and gave her time to unpack and collect herself. She came down to the living room a bit later and I tried to teach her to juggle. 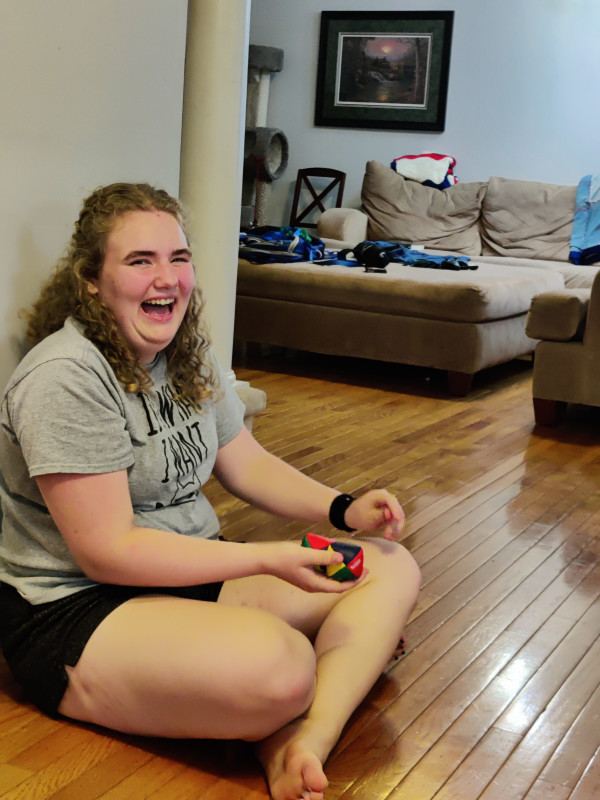 Coty didn’t take long trying it out. While she didn’t figure it out, we had a fun time. 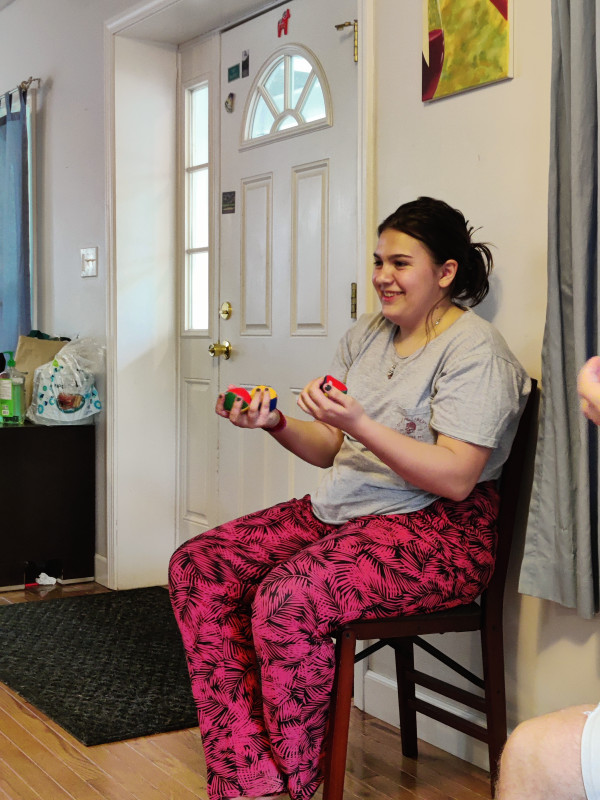 Coty’s second day in town, Friday was the only day we had available to tour the high school. Did I mention that school started on Monday. Danelle had already registered Coty for classes (with her participation of course). To help her acclimate, we wanted to give her a chance to walk through the school and see where things were.

As much as this was a tour for Coty, I had never really seen the Webster Groves High School to this level of detail before. One of the things that stood out was the level of care the teachers had. We went into the drama hallway to see where one of her classes would be. The two drama teachers were deep in a conversation with each other. When they saw us, they stopped and introduced themselves. Coty and Sonora were their total focus. They were inviting and engaged.

Later, we visited the sports office to talk about softball. Coty had never played softball, but was interested in the sport. One of the administrators was about to leave for a meeting and walked us out to where the softball team was practicing. He stopped practice to introduce Coty to the head coach and the other coaches. They were extremely inviting!

Before we left the high school, the girls got a photo together. 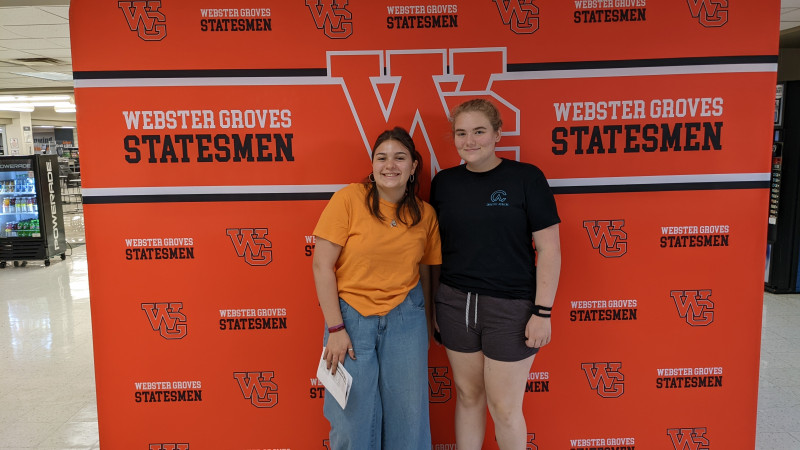 We went out as a family and practiced throwing a softball on Friday evening. She threw the ball like it wasn’t her first time throwing a ball, I was quite impressed. Later on Sunday, we went to the local ball diamond and practiced hitting the ball. This brought out big smiles. It looks like our family (and that includes Coty) is going to have an amazing year together!!!