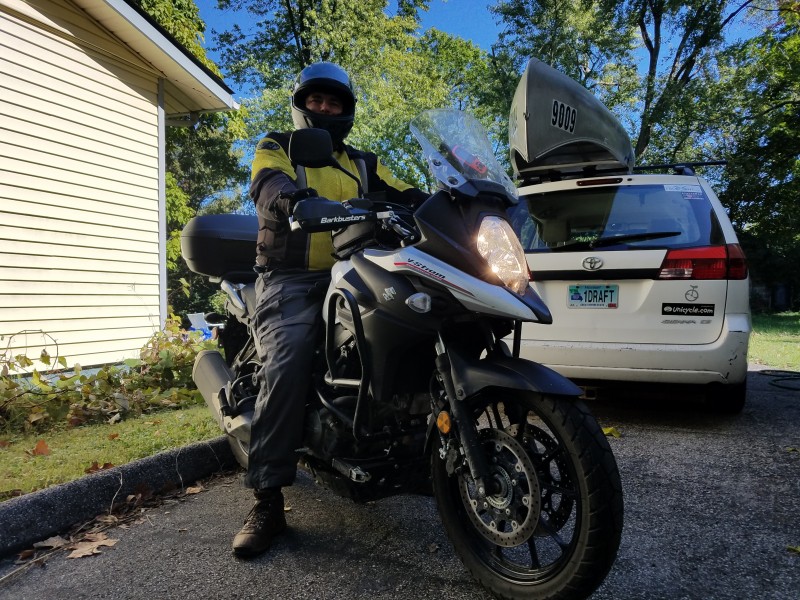 I originally took time off work for the week to participate in the MR340 canoe race. After nearly sinking the 3 person canoe on the Missouri river, the team decided it wasn’t our year. This left me with a one week vacation to do almost anything I wanted with. I decided I would use half of it on a motorcycle trip.

I left Saturday just after lunch. Corvin had a cross country meet in the morning and I didn’t want to miss seeing him run. After he finished and we got back home, I got all of my gear together with my loose plans and headed out for the unknown.

Actually, it wasn’t completely unknown. I had a general plan. I was going to ride Illinois Route 3 south most of the way into Tennessee. Then I would cut across the state and head towards Tail Of The Dragon. This famous (to motorcycle and car enthusiasts) road has 311 curves in an 11 mile stretch. But I’ll talk more about that later. First, I had to get there.

This October day was fairly cold. Being that I was on a rural state highway, I wasn’t going extremely fast. Add that to a few side trips to see the Mississippi river and I stayed decently warm. Unfortunately, the Mississippi was in flood stage. I tried to get to the Saint Genevieve ferry crossing, but was stopped short. I wanted to cross the water, but I could also visibly see the river slowly rising and decided to stay dry and safe. 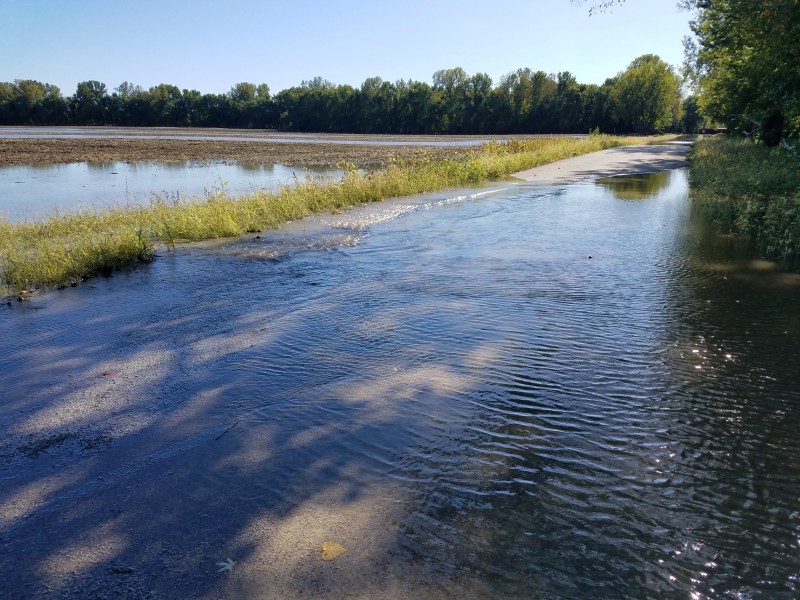 As I posed the bike for this photo, I watched the water flowing over the road and decided it was as far as I was going this way. 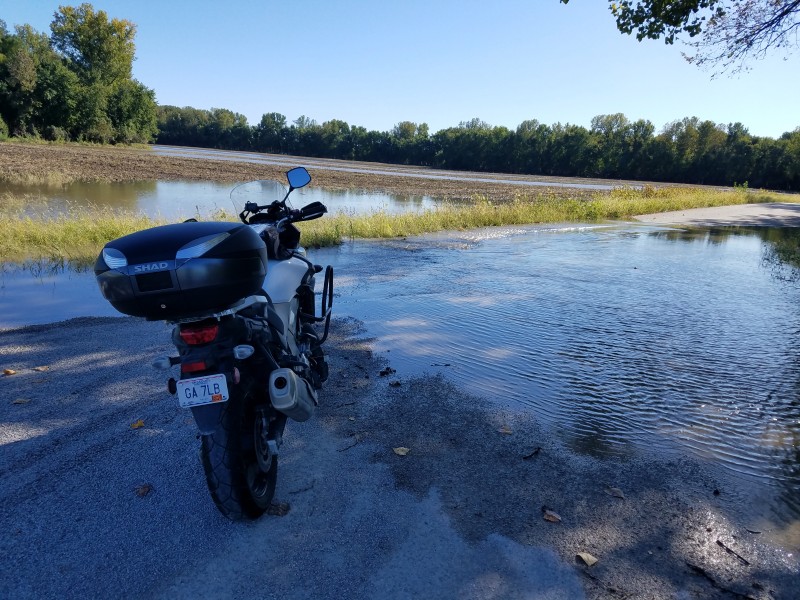 Eventually, I pulled over and added my 1 piece rain suit to add more wind protection and warmth.

I ended up stopping for the night when I couldn’t stay warm enough. I wanted to get to Nashville, but it just didn’t work. This motel was the most expensive one I stayed at for the whole trip. I learned the next morning that I was one exit from Nashville! I made it 352 miles for the day.

The next morning, I prepared the motorcycle for the days’ ride. This included drying it with a towel (sorry motel), packing my bags, and preparing my directions in the top bag. 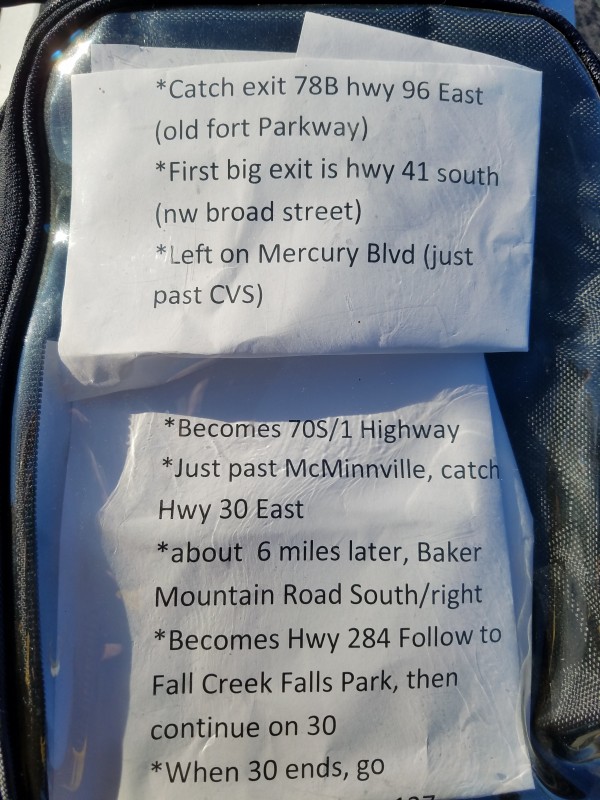 Sometimes you get stopped by a train. This time, there was a cool mural and miniature water tower to check out in Englewood, TN. 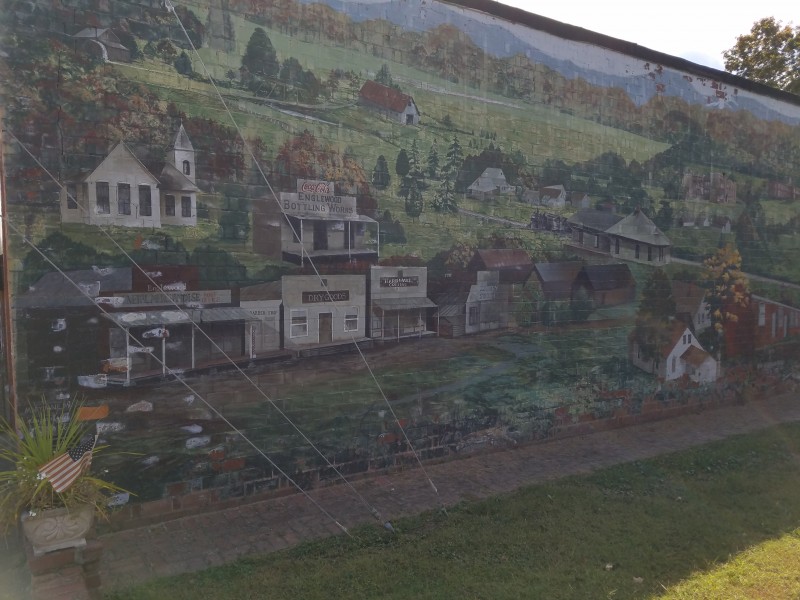 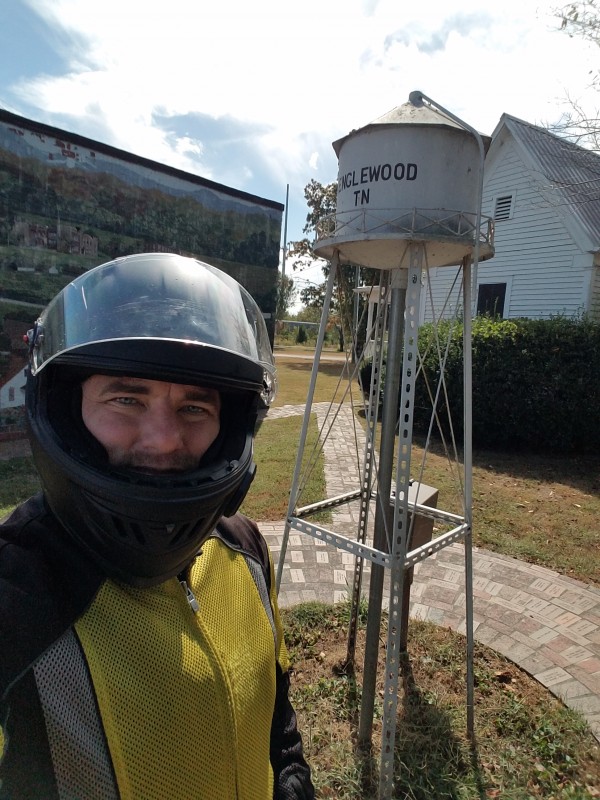 Yesterday, I could hardly stay warm on the motorcycle. Today it was much warmer, and I put on different layers that had more warmth. It made it an easy and fun ride all the way to the Dragon in Deal’s Gap. I even managed some light off road to check out a dam. 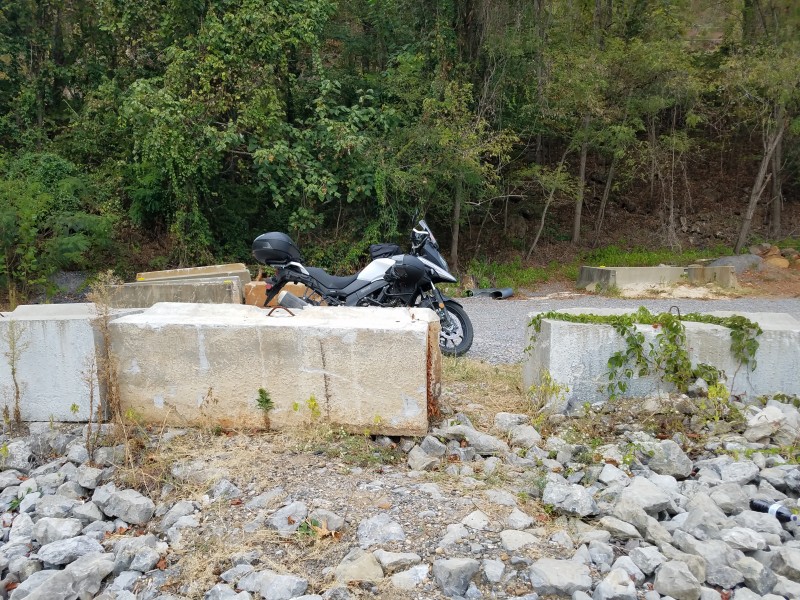 And to prove I was there, here is one photo. 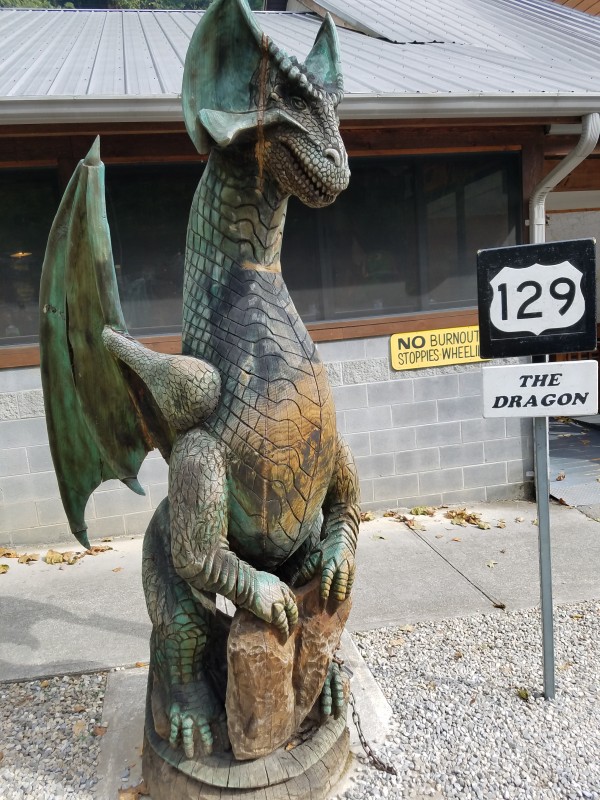 I was a bit numb after finishing the dragon. I rode some more off road, but its just a lot to take in. I headed to a motel where I could meet another rider from the Internet that would ride with me the next day to get some local flavor. 312 miles on this fantastic day!

I thought about taking a swim in the motel’s pool, but it seems that they may have put it up for the season already… 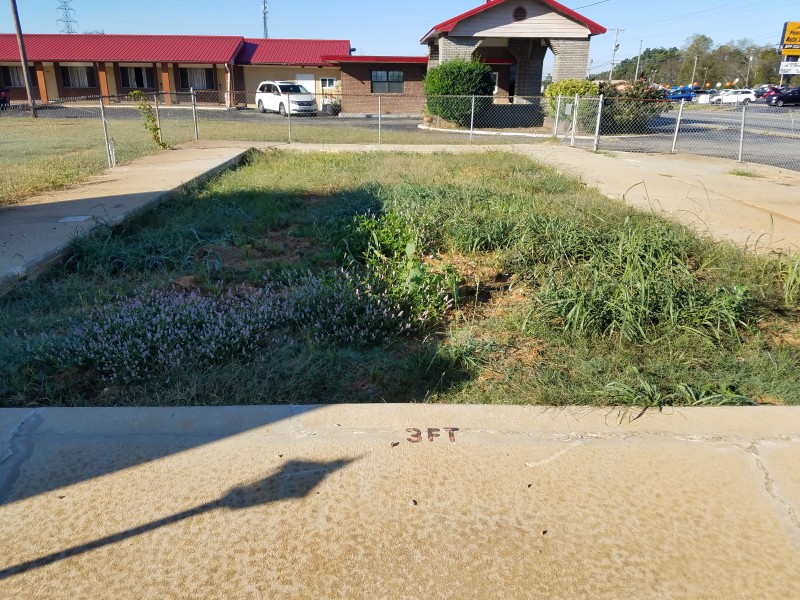 Today I was meeting the rider from online (who’s name I’ve forgotten). He is riding this massive 1200cc Honda on the right. 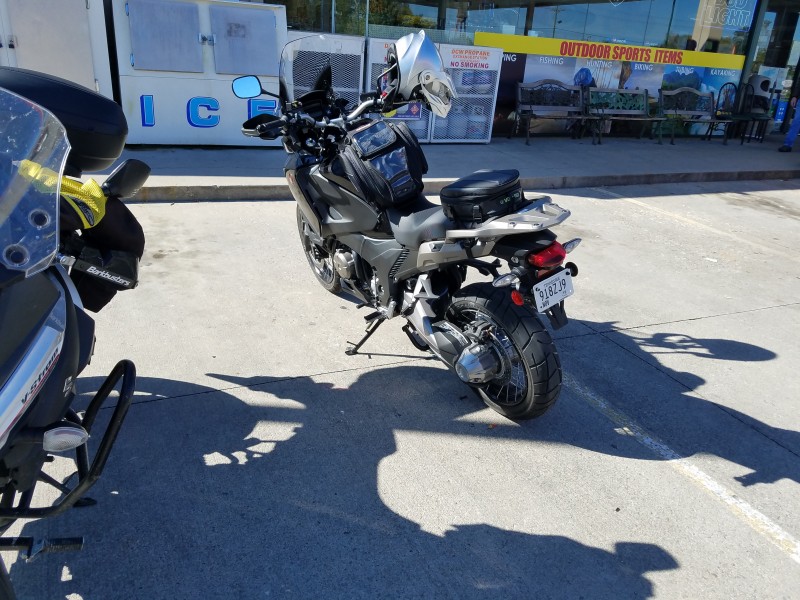 We rode several places I would not have considered from the map that were fantastic roads. In addition to that, I found out it was his birthday!

We came upon this accident, never did figure out how this truck got into this horrible position. 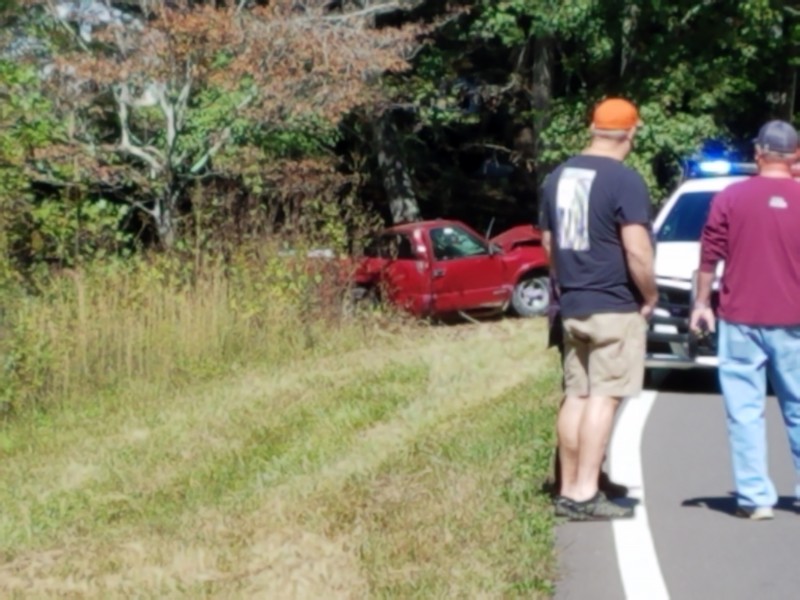 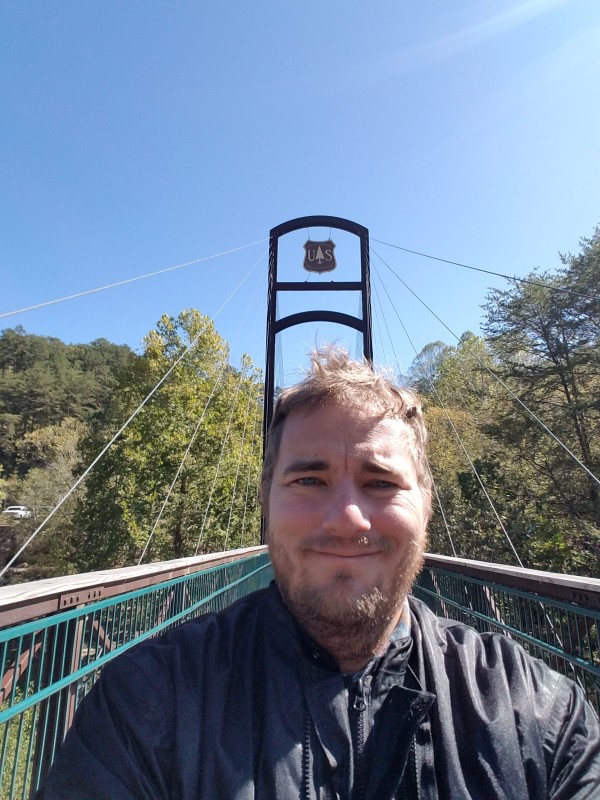 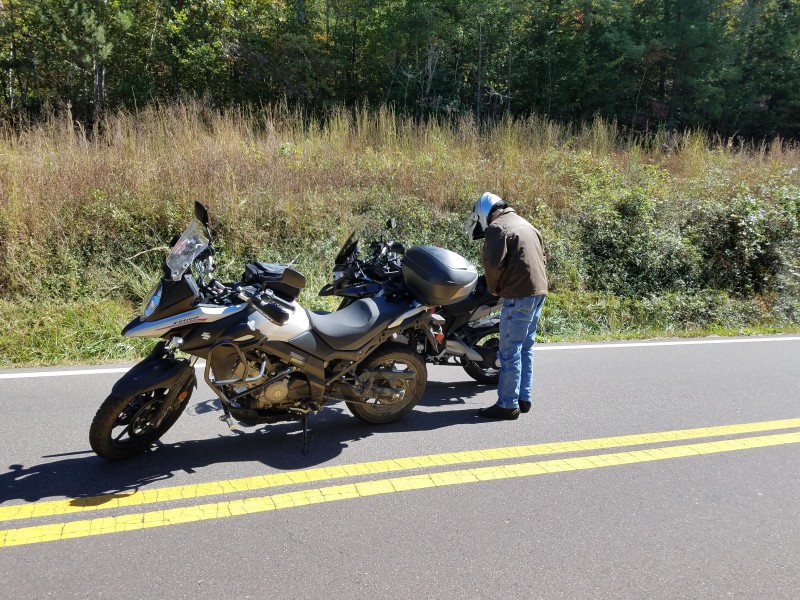 After lunch, we parted ways. I headed south for Cherohala Skyway. This highway was amazing. 43 miles of twists and turns. Before I got to the highway, I took a nice gravel detour to get there. 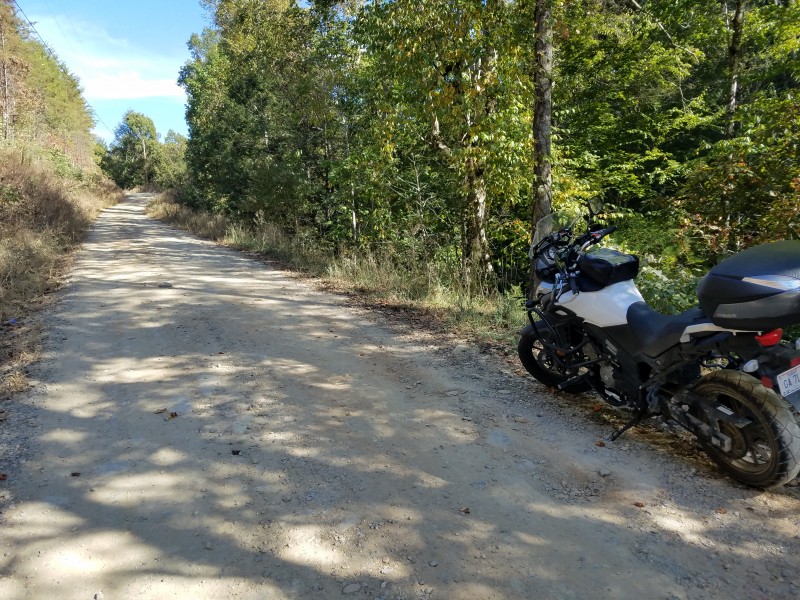 Detour is the name of the game. I also went several miles out of the way to get to this waterfall. 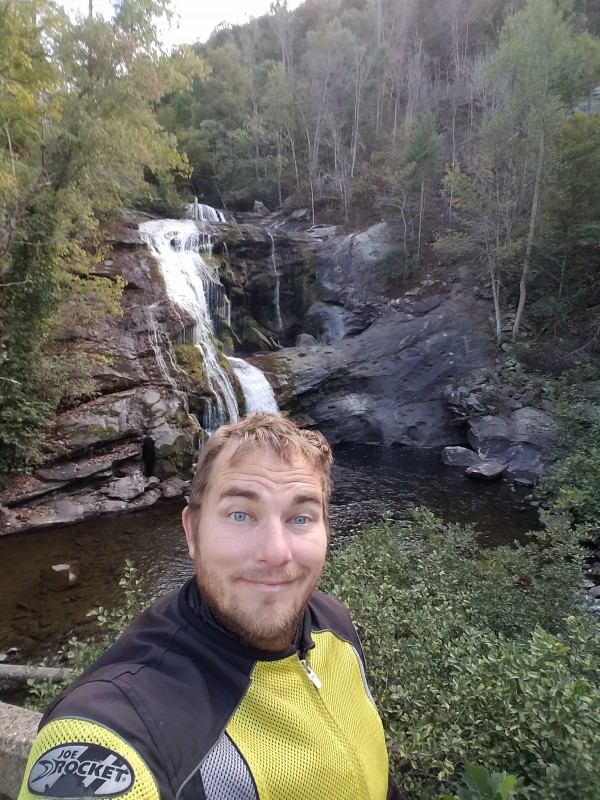 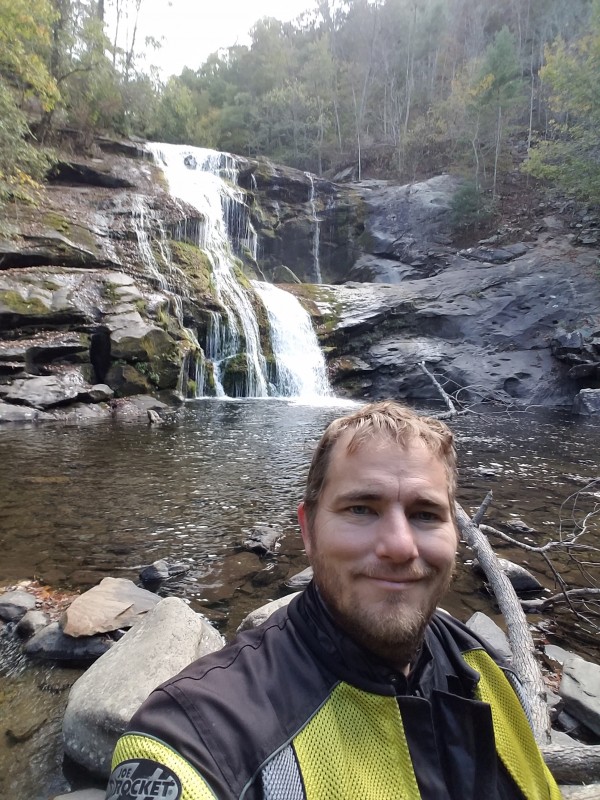 I didn’t grab any photos, but I did find an off road detour. This was an out and back that I spent nearly an hour on.  Back on the Skyway, I did stop for a few overlooks. 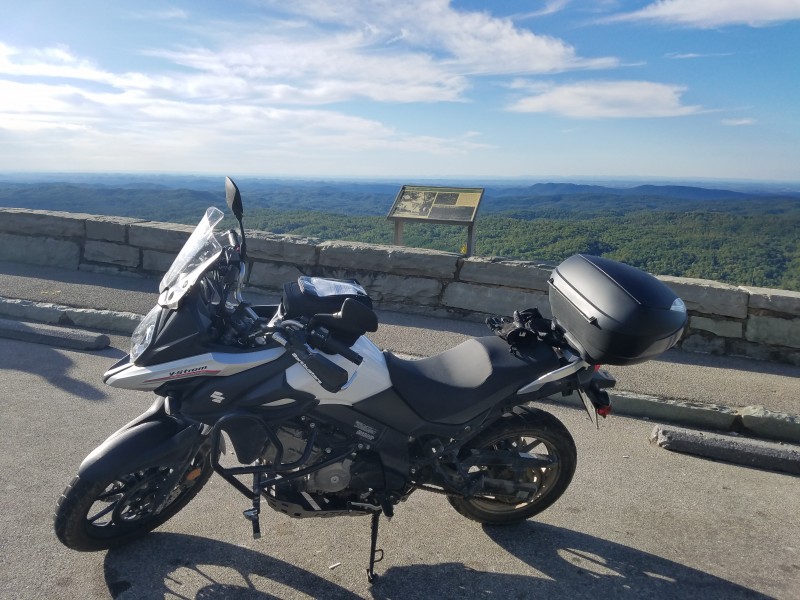 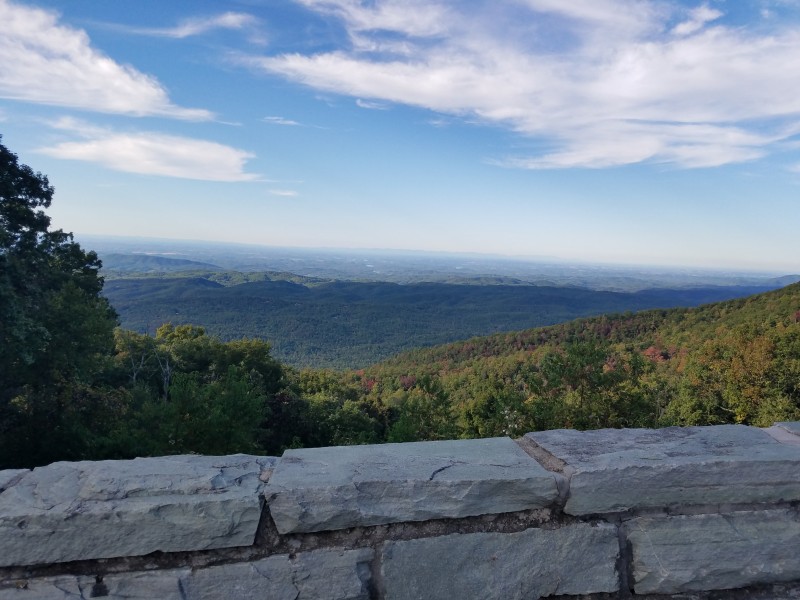 This is the best thing you can see when riding a motorcycle! 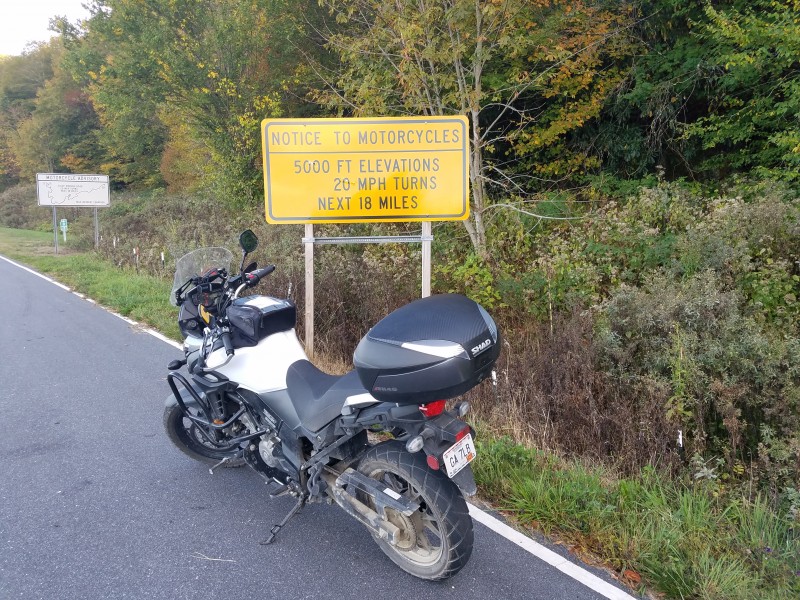 Hey cool, I can (and did) go under this sign! 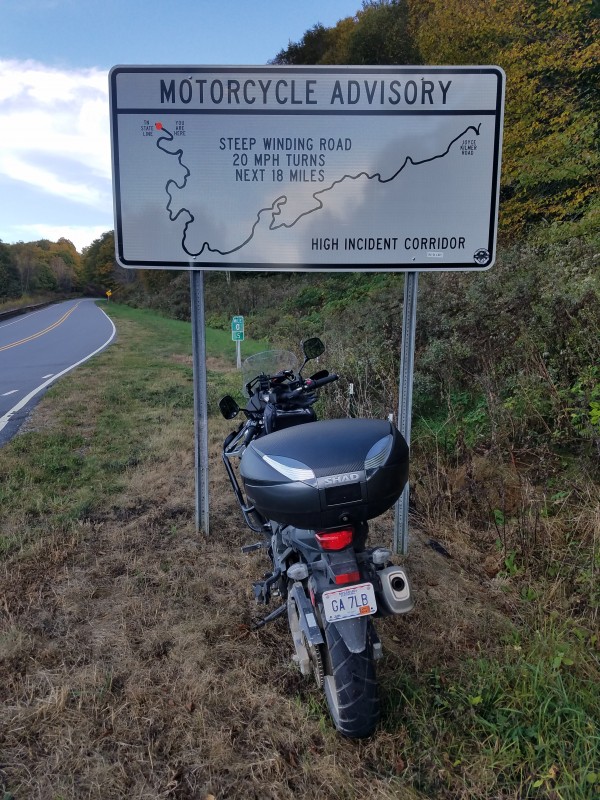 I spent the night at the Phillips motel in Robbinsville. It had very cool art outside. 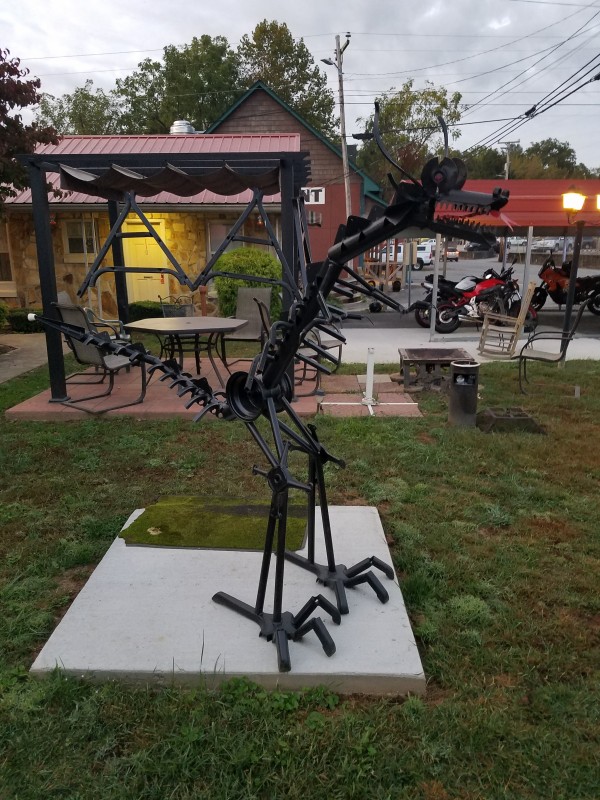 I got up early and the day was just feeling right. I went outside to check the weather and my bike. The mood was still up, but school across the street was about to start. 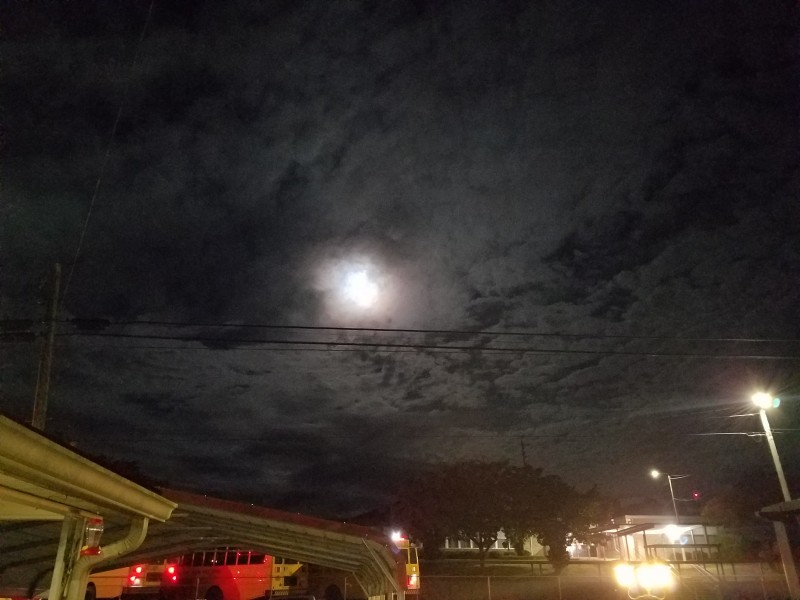 During that outside coffee drinking time, I met a fellow motorcyclist. We chatted about each other’s ride and how wonderful the world is. Then he suggested I visit the Joyce Kilmer Memorial Forrest. Eventually I found it on the map and performed some backtracking to get to there. I wish I remembered his name so I could thank him for an amazing morning. the riding was fantastic and I had the overlook to myself!

The path to the overlook. 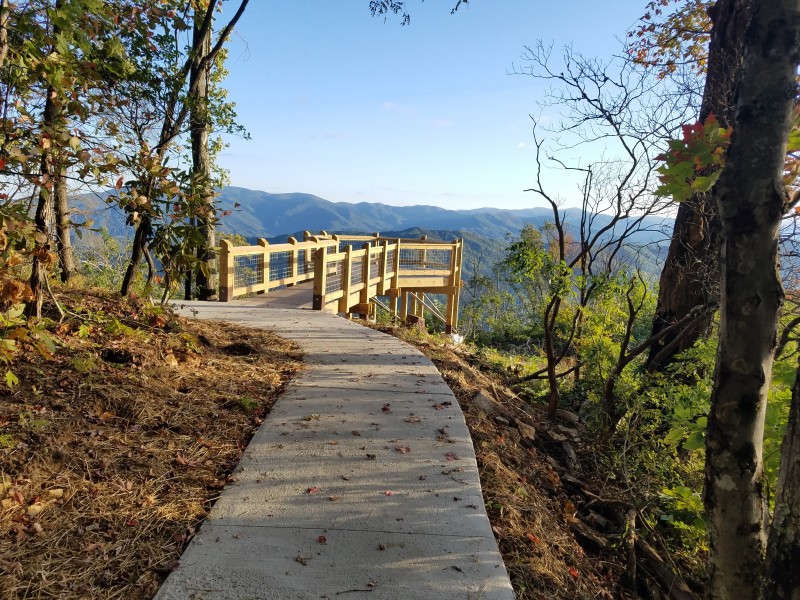 The view from the overlook. 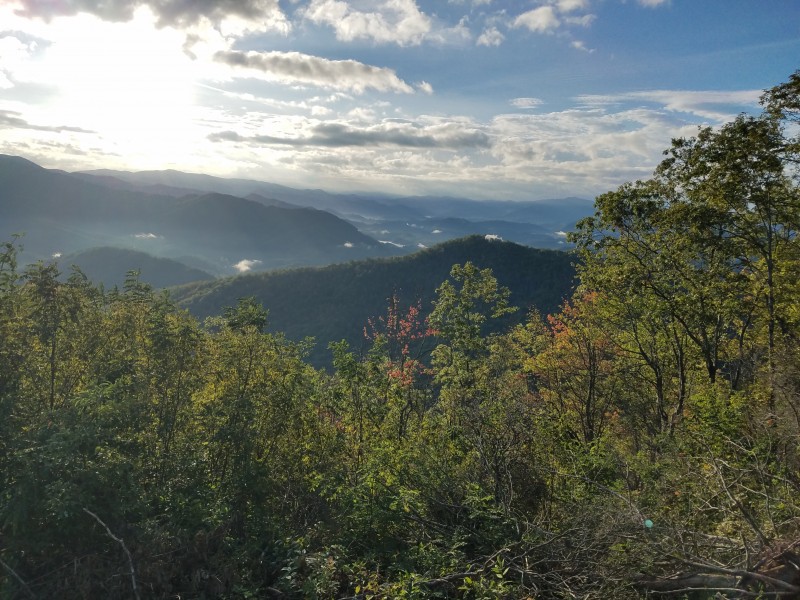 Unfortunately, I knew today was the day that I needed to start coming home. I went back to Deals Gap to run Tail of the Dragon twice more.

I found another roadside waterfall worth stopping and hiking down to. 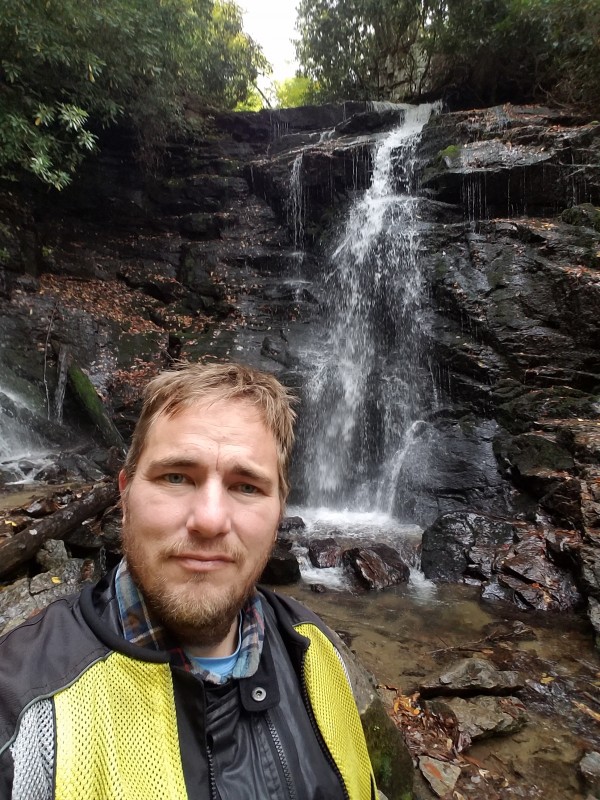 Most of the rest of the trip becomes a blur. I learned that I don’t like interstates with my V-Strom. The motorcycle has no complaints about going whatever speed I ask of it, but the fuel economy lets me know that it wasn’t designed for it. More importantly, I feel like I’m missing something when I’m on the interstate. I exited and took state highways and was satisfied with my choice. It also meant that I could take a ferry across the Ohio river to Cave-In-Rock. 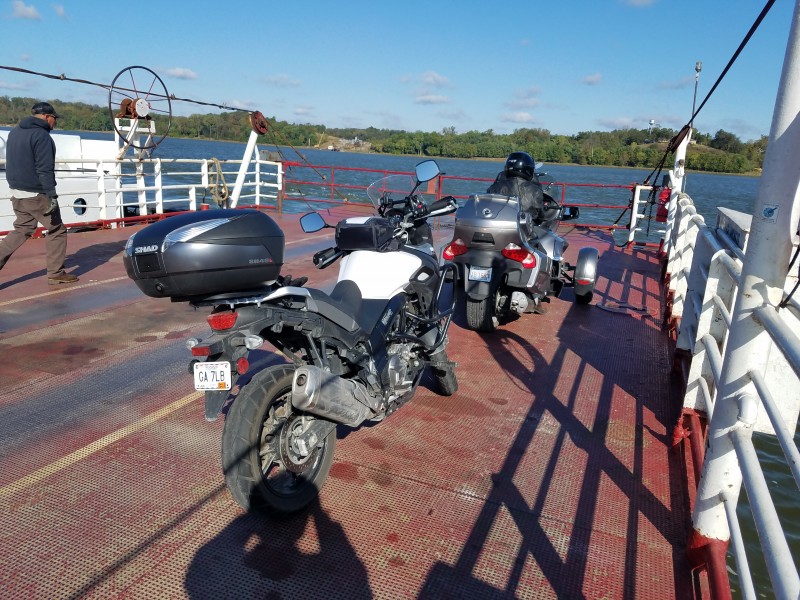 .I did some minor exploring, but knew that I didn’t have enough time. I wanted to get home to pick up Sonora from school and be with the family. These trips always end too soon, but are a fantastic time to relax and reset. I’m a big fan of the Shad top box for holding all of my valuables during the trip! All told, the trip was 1,698 miles split over 4.5 days.

If you want to see my horrible video, watch below. I used my cell phone mounted to the crash bars on the bike to try and capture how far I leaned over. The vibration basically ruins the video, but it was all I had available.