Happy Birthday Hogan and Matt! On our last day, we finally managed to get on the road by 9am. This was also the first day that the St. Louis’ van needed to pay to get into the park!

As we drove towards Old Faithful, we saw either a wolf or coyote cross the road. We’ll have to check the photos to be sure. We continued South to the South Entrance, on into Grand Teton National Park. The amount of snow n those areas was amazing, considering that it is June.

We stopped at a viewing area with trails, but the trails were closed due to bear activity. We could see herds of elk, which apparently attract the bears which is why they closed the trails. 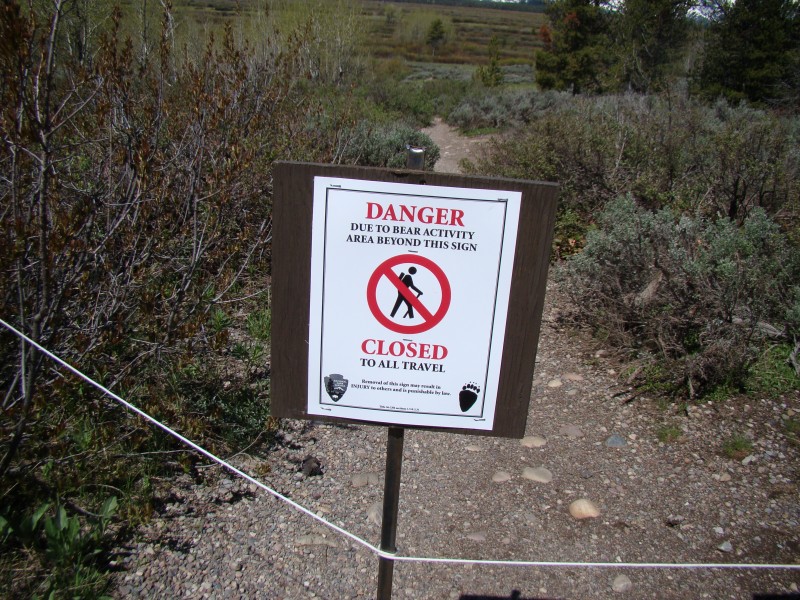 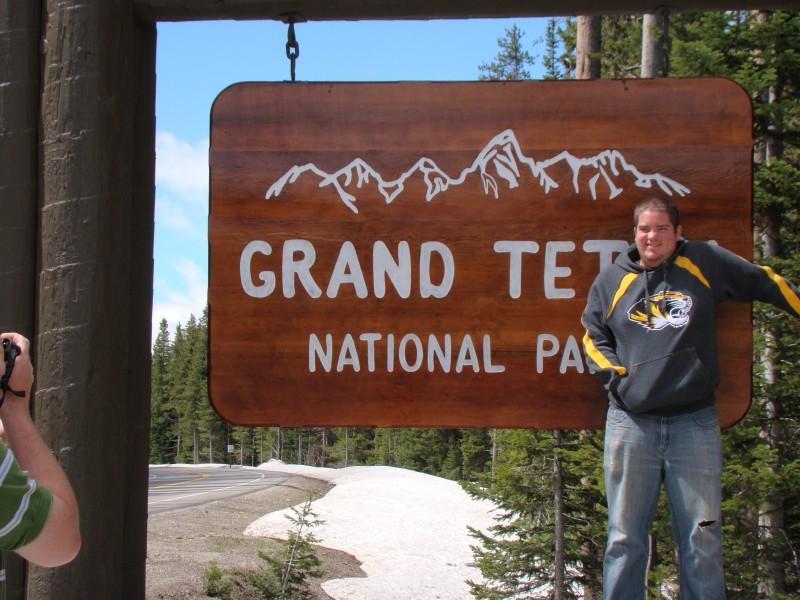 A short distance away was a bridge and dam. We went to a parking lot just downstream to have lunch. They had large logs as wheel stops. Tom and Hogan did their own little dance competition, jumping from log to log. We also watched a man and his son catch a fish. The kids were very excited to see it.

As we continued south through Wyoming, we saw a lot of antelope scattered throughout the landscape We even got to see a whirlwind of tumbleweeds as they crossed the highway — if we didn’t know better, we may have thought it was a prop from a movie set.

As we neared Independence Rock on highway 220, we saw several other potentially interesting places to stop: Devil’s gate, Martin’s Cove, and several others nearby. The rest area for Independence Rock wan nice. We all walked out to the rock. hogan and Corvin were among the frist to go up, followed soon after by Danelle and Sonora. The 4 of us were joined at the top by Bob, Henry, Tom, and Herman. After looking at carved names and dates for a while, Hogan and Tom took Sonora down. Hogan came back with Matt. We continued climbing, going the length of the rock, seeing signatures of many eras. We climbed like mountain goats, eventually finding a way down that everyone could manage. Somewhere along the way, Herman managed to split a seam on his jeans. Poor guy — they were his favorite jeans.

Meanwhile, Dan, Pat, Kathy, Lauren, Hannah, and Matt had set off to walk around the rock. Part way around, Tom and Sonora were traded for Matt. We all met up again at the other end of the rock. We were able to get a great family photo of Tom, Kathy, lauren, and Matt. Hogan managed to carry Lauren about 10 feet up the rock! 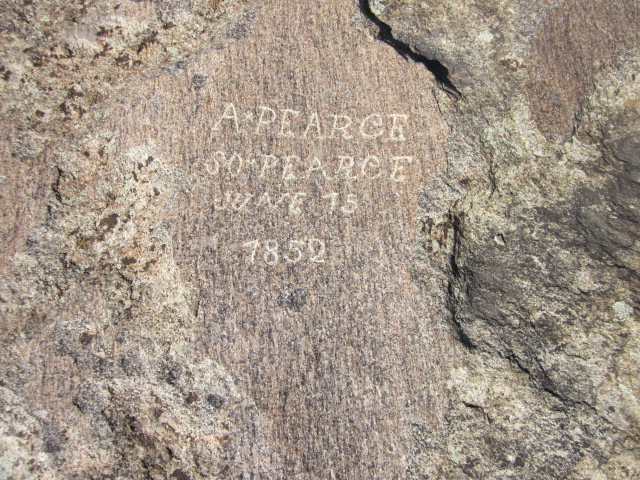 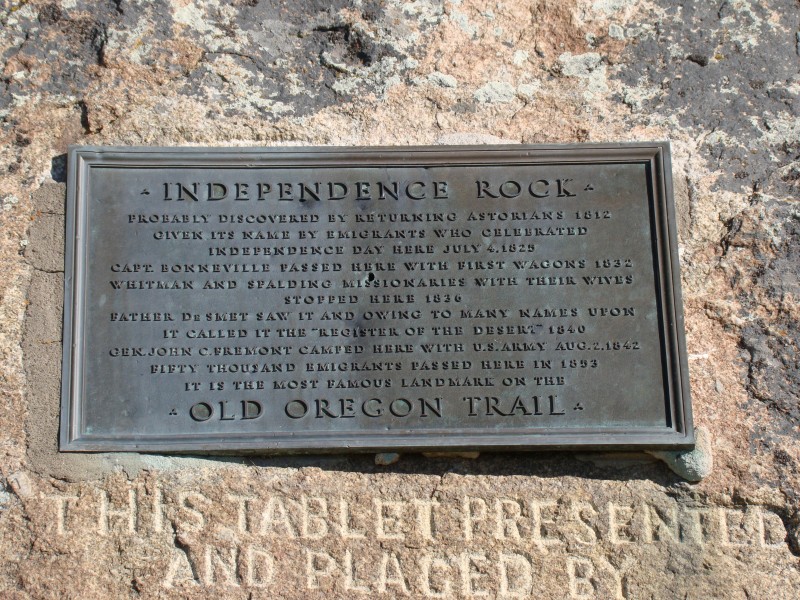 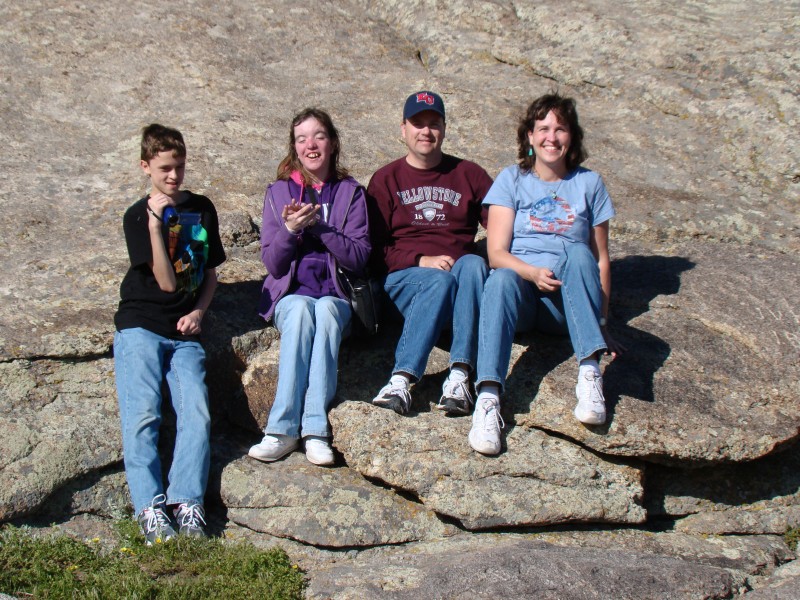 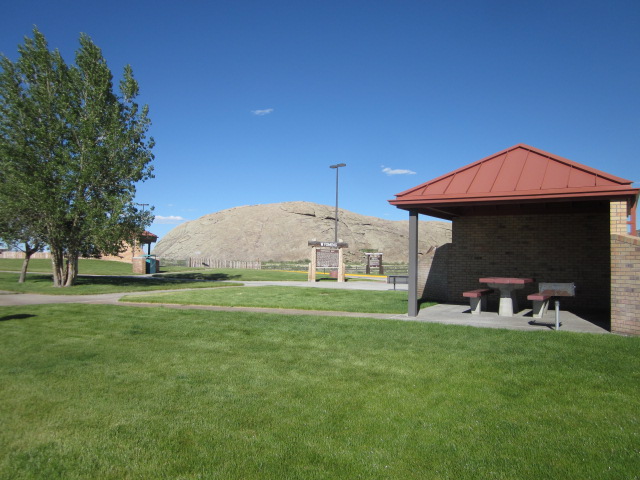 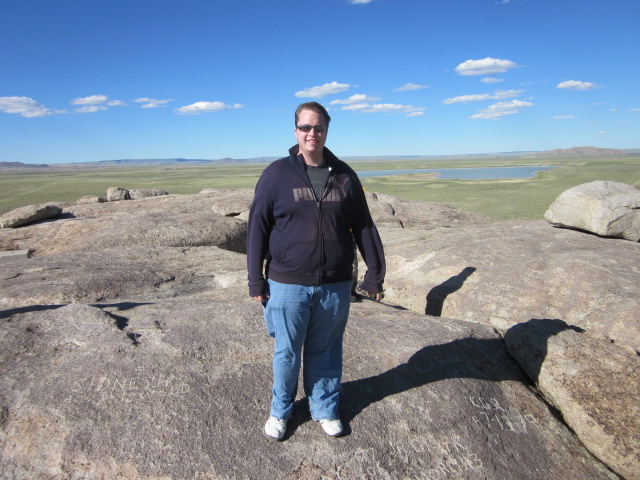 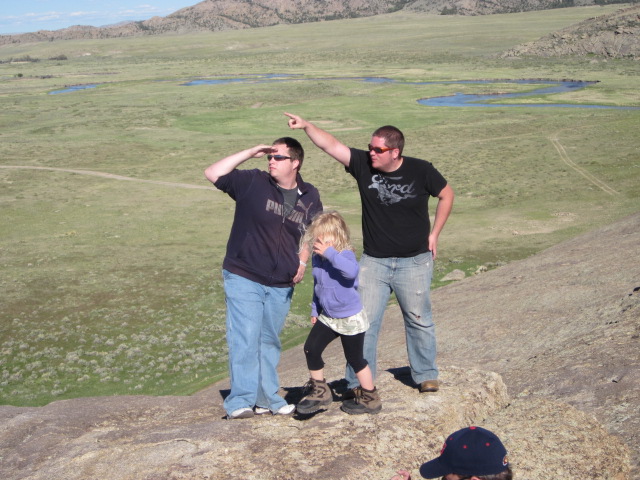 On the rock, we saw antelope, a lizard, jackrabbits, and bulls. On the trail, they also saw antelope, bulls, but also fire ants and possibly coyote tracks.

Ohh, before we got to Independence Rock, the most unexpected thing happened. Hogan asked Danelle to take the wheel! This was the first time anyone else would be driving the white van. So Danelle drove the 20 miles from the gas station to Independence Rock as well as the next leg to dinner and the final leg to the hotel.

For dinner, we went to a Mexican restaurant. They were able to seat all 14 of us fairly quickly at one long table. The place was very nicely decorated. They had good salsa and a very yummy bean dip for their chips. Matt went through 3 containers of the bean dip. Corvin and Danelle had two for themselves. Everyone seemed to like the food. After dinner, the server came out with two big sombreros and two platters of a dessert. They then sung a birthday song for the birthday boys and we all shared the tasty desert. 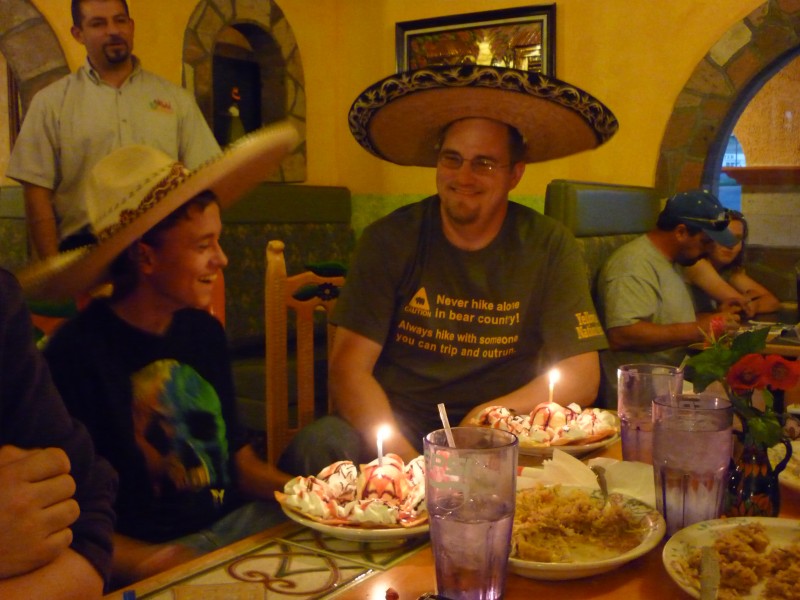 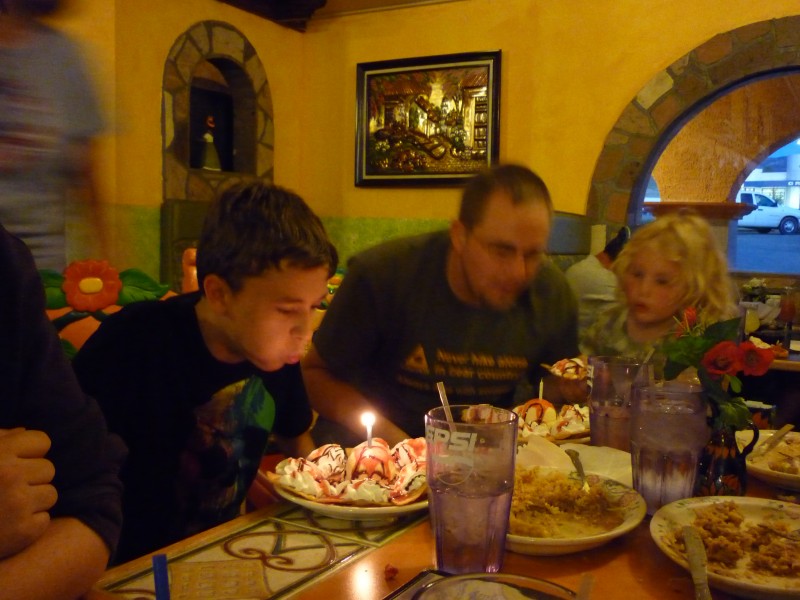 After dinner, Tom and Henry tried to win teddy bears with “the claw”. Thy actually got some! A sonic silver for Matt, a blue puppy for Sonora, a diamondbacks bear for Corvin, and a MU tiger for Dan. What a haul!

We finally got to the hotel and prepared for bed. Since this was our last night together, the kids stayed up and played a bit with Matt and the adults said goodbye and traded photos. For the St. Louis van, there would be a long drive ahead!