For our last full day in Yellowstone, we started off with a big breakfast of pancakes and french toast. We made our way into the park with partly cloudy skies. the next thing we know, we are driving through hail and sleet. About 5 minutes later and it is snowing — 5 more minutes and we have sun. Sheesh! once it 2was sunny, we found a nice little pull off with lots of great rocks to climb — perfect for the kids (age 40 and under). it might have been at Golden Gate, but we aren’t sure since it wasn’t marked with signs. We found some caves and crevasses, so Bob kept making bear grunts to scare us. 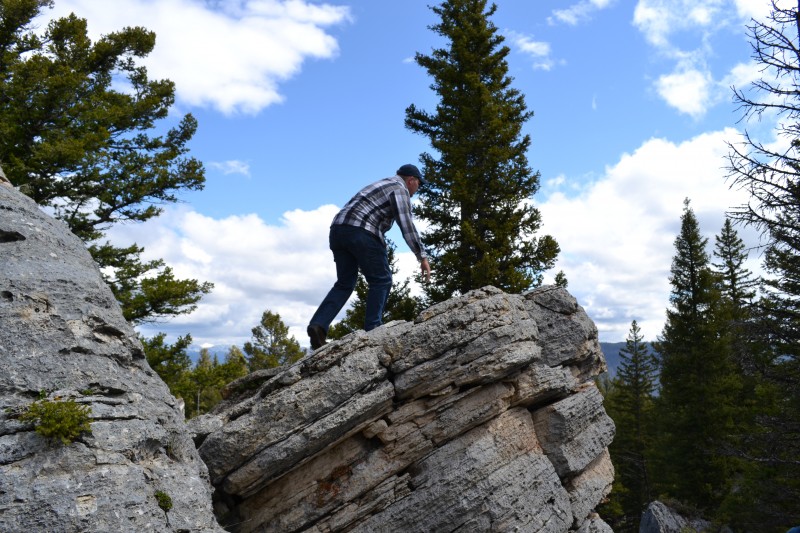 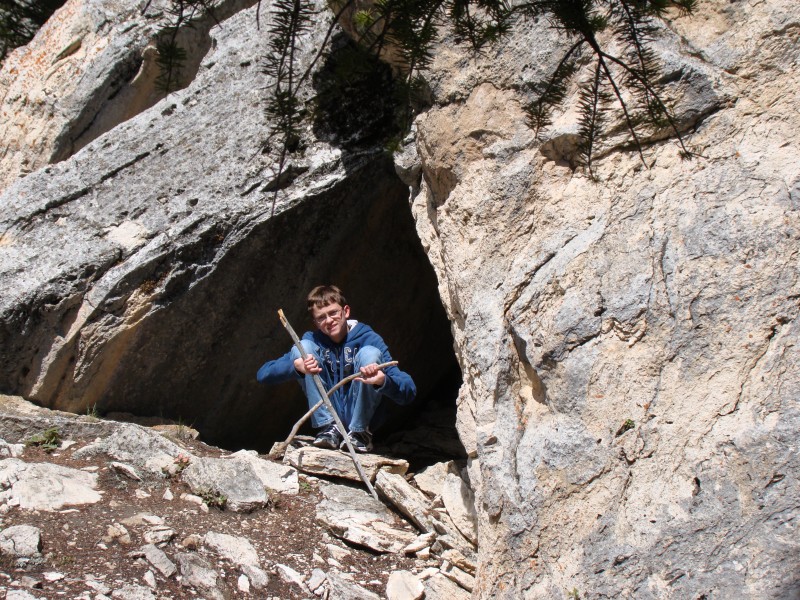 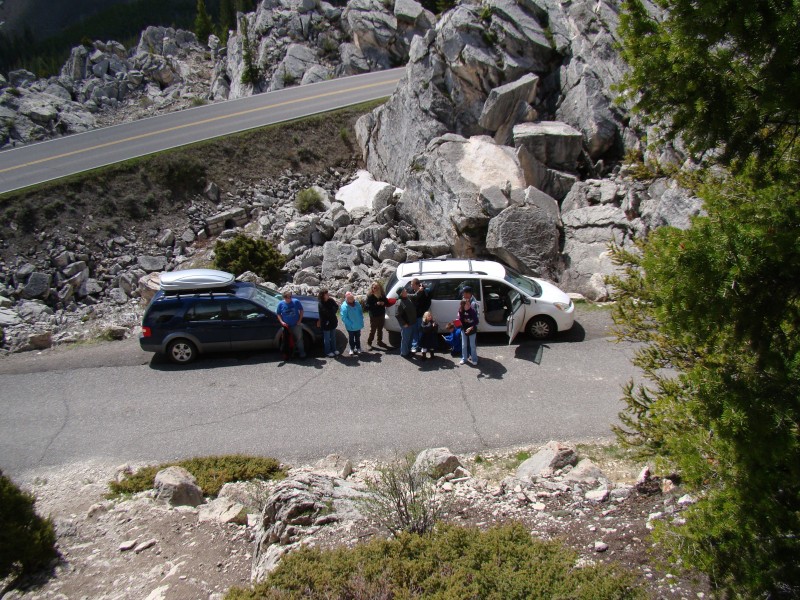 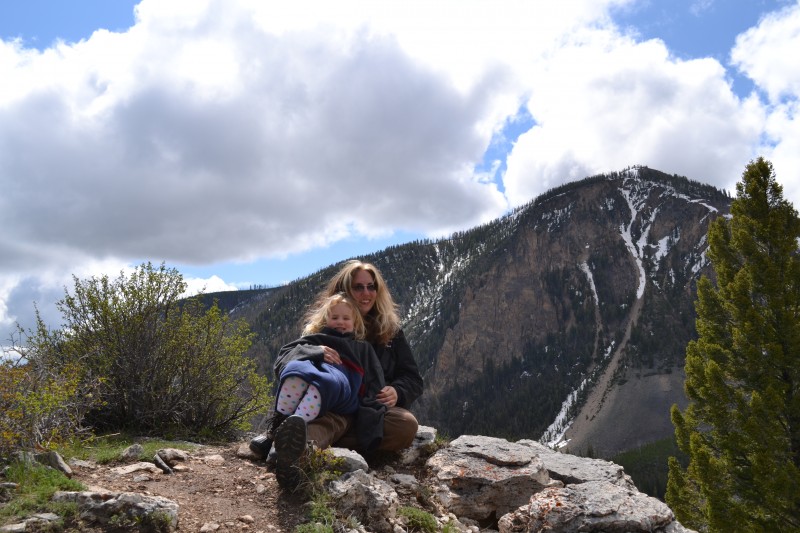 We got to the Mammoth Hot Springs and drove the Upper Terrace. Bob got out and walked a short segment, meeting up with us as we returned from driving the lop. Then we drove to the Lower terrace. Danelle and bob walked around taking photos while one car full of the group went on to find restrooms.

When everyone was back in the cars, we went on to the Petrified Tree. There is only one and it is fenced in because there used to be three, but the other two where chipped away and broken up by vandals. So sad! 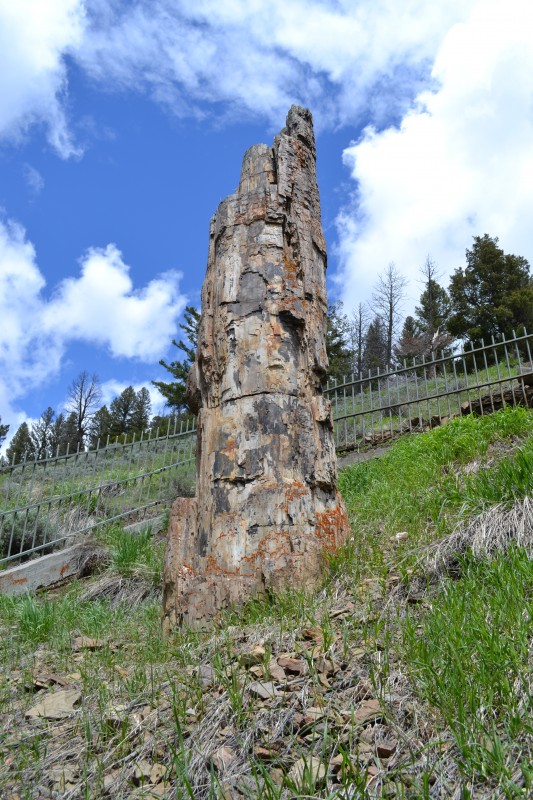 A little way down the road, a wildlife viewing group of vehicles had clustered. There was a black bear cub up in a tree. The ranger said that the mom was probably at the bottom scaring it so that it will go off on its own. She was out of sight behind the ridge. Sounds like the reverse of empty nesting…

We stopped to make lunch in the parking lot of Tower Falls. Henry and Herman got something at the shop. While the rest of us had sandwiches. Then many of us took the long (in altitude) hike down to the Fowler Falls. The part that you used to walk on to see the Falls from the bottom was closed due to a rock slide across the trail. The view at the bottom looked a bit like the River Des Peres because it was lined (naturally) by white banks that were steep and had no vegetation — at least, in one fairly short segment. 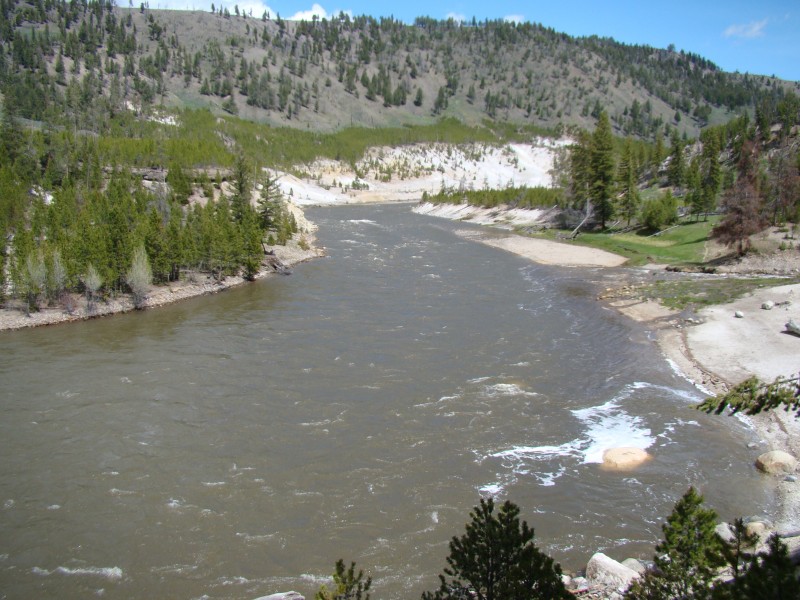 Unlike two days earlier, the Dunraven Pass was open, so we took this snowy route to the Canyon Falls. Everyone took the steep path down to the overlook at the Lower Falls. What an amazing view. Hopefully the photos can do it justice! Once we were all at the bottom, we got a group shot with the canyon behind us. 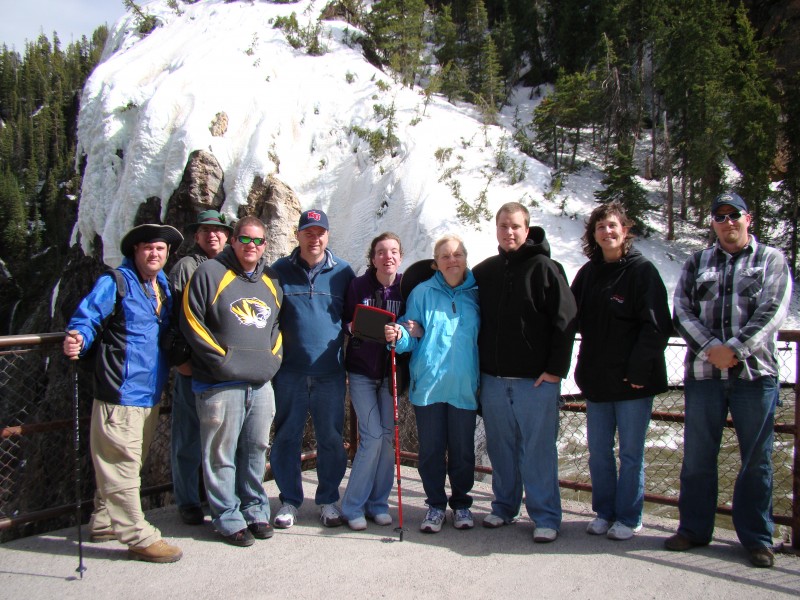 On the way up, the younger family members were in more of a hurry to go up, so near the top, Hogan, Danelle, Henry, Hannah, Matt, Corvin, and Sonora took a detour onto the North Rim Trail that leads towards the Upper Falls. After several minutes, we turned around and returned to the cars, only a few minutes after everyone else had returned.

in the last leg of our drive back to West Yellowstone, Hogan wanted to take a detour on Riverside Drive. We had no idea how long it would take, so hogan estimated 45 minutes. We set out along the Madison River and saw several animals, including birds, bison, and deer or ell. About 5 minutes later, we were back on the main road 🙂

We were all back to the condo by 7. We made burgers, fries, tacos, hot dogs, and pizza for dinner — basically everything that was left that needed to be cooked. After dinner, we celebrated two birthdays — it made more sense to have it today rather than tomorrow while we are on the road.

So they opened presents and we had cake, ice cream, and peanut butter shakes. This was after singing happy birthday of course. 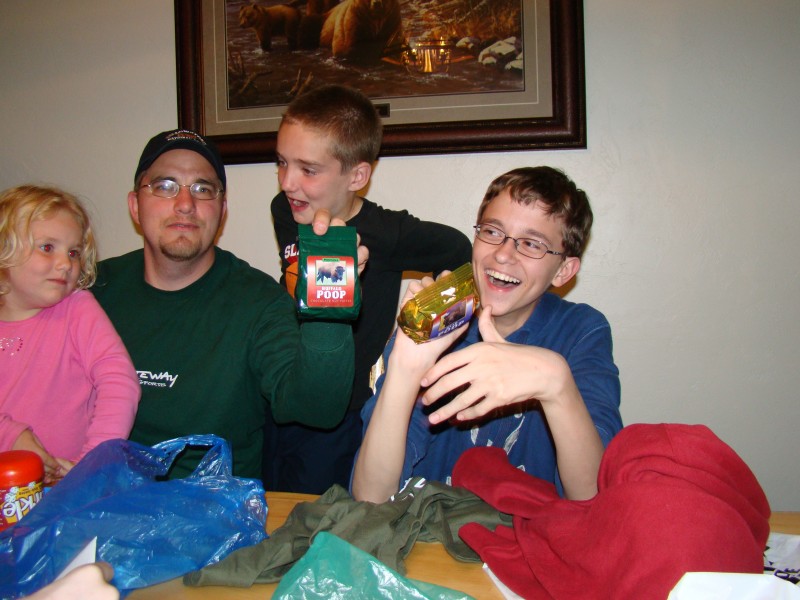 The last task of the evening was to start packing. Tom and Danelle were the last ones to bed because they were trying to get things ready for the morning.