Once again, Corvin woke about an hour before the rest of us, except Bob. Corvin had slept through the buffalo last night. The tow of them were playing a game of Sorry when Danelle woke up. They had been through a whole deck when Danelle joined in. It was a fun game — very close — but Corvin won! We enjoyed another slow morning, but got into the park earlier than yesterday.

We didn’t get very far before the first grouping of cars told us that there was wildlife to view. We asked a bystander and learned that it was a bald eagle. since we can see those in Missouri, we moved on… We made it to Canyon Village for a bit of shopping. Then on to the Canyon Falls. We visited the upper falls viewpoint. The views were impressive and we weren’t so high up that Pat was afraid. 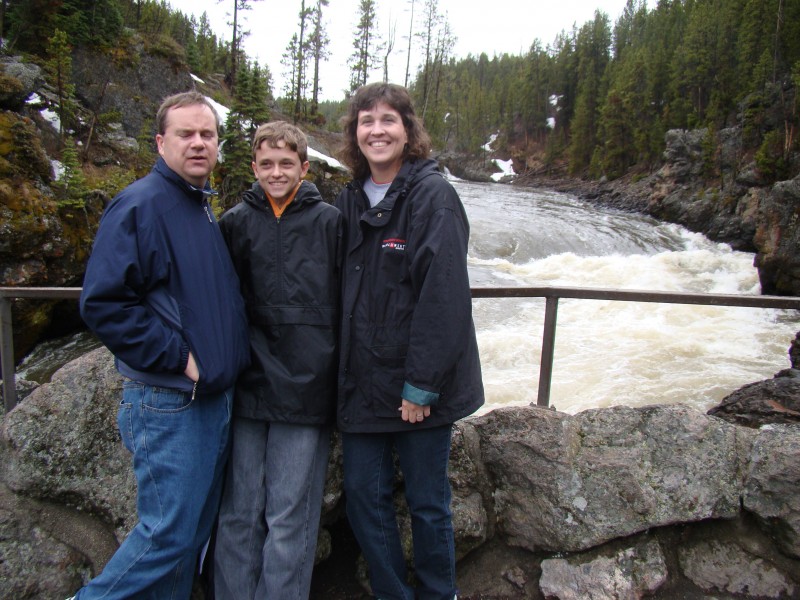 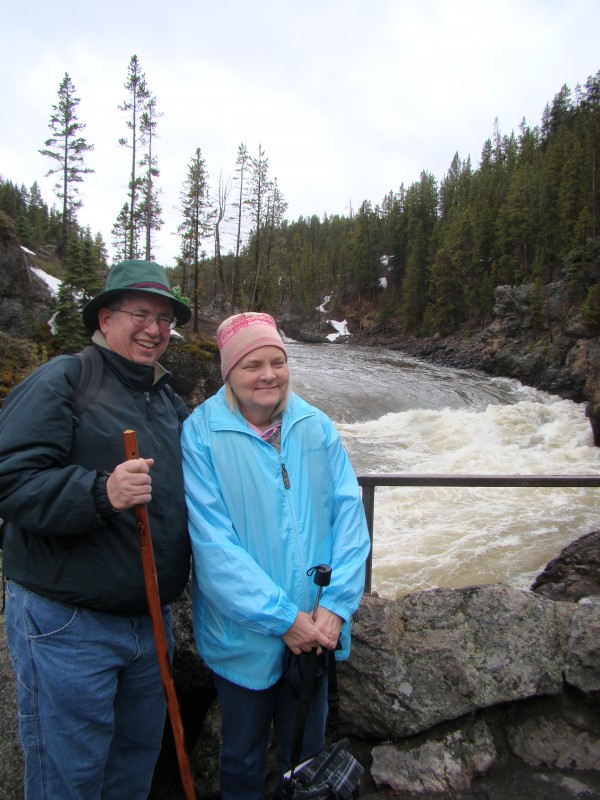 Next we went on toward the Fishing Bridge, but stopped along the way to see a grizzly bear with her two cubs. This was in the Hayden Valley just north of the Mud Volcano. Soon after, near the Fishing Bridge in Pelican Valley, we saw another mother grizzly and cub eating something. They were fairly close to the road for a nice view.

We stopped at Mary Bay and Steamboat Point for great views of the iced-over Yellowstone lake and had a late lunch. The kids tossed some goldfish crackers into the parking lot. The ravens loved to eat them! We chatted with Becky on BAK about how hot it was there. She was unfortunately having car troubles and we were worried about her. On the way back west, we stopped to check out another grizzly sighting. The kids (Corvin and Sonora) were tired of trying to see bears, so they threw snowballs at the van instead. They had a blast! And they were fun to watch 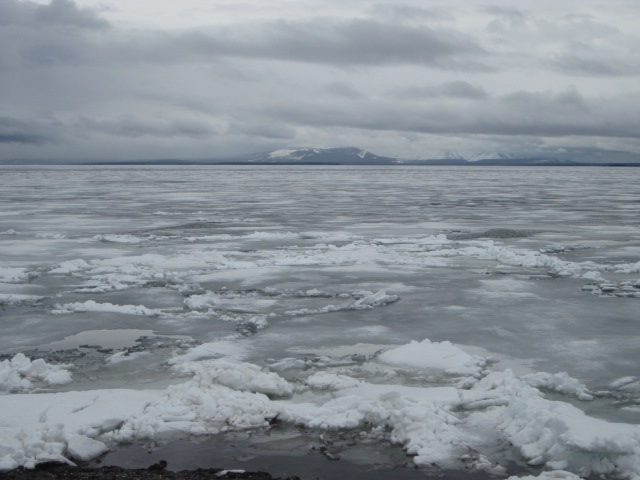 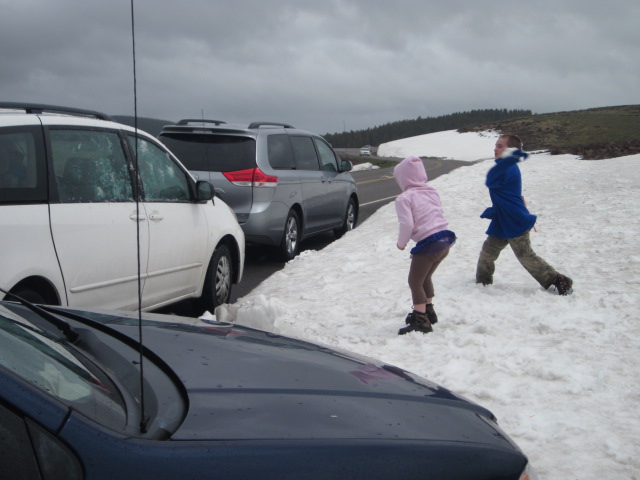 Next, we stopped at the Mud Volcano. These were awesome! There were several cool thermals here, including the Dragon’s Mouth — Danelle’s favorite so far. About 25 years ago, the ground heated up to over 200 degrees F, killing the tree roots and soon after, the rest of the trees. Some are still standing, but most have fallen. Dan, Tom, and Danelle were listening to a ranger guided tour that we caught up with. He had a lot of great information about the area including the creation story of one of the tribes which involved Dragon’s Mouth. 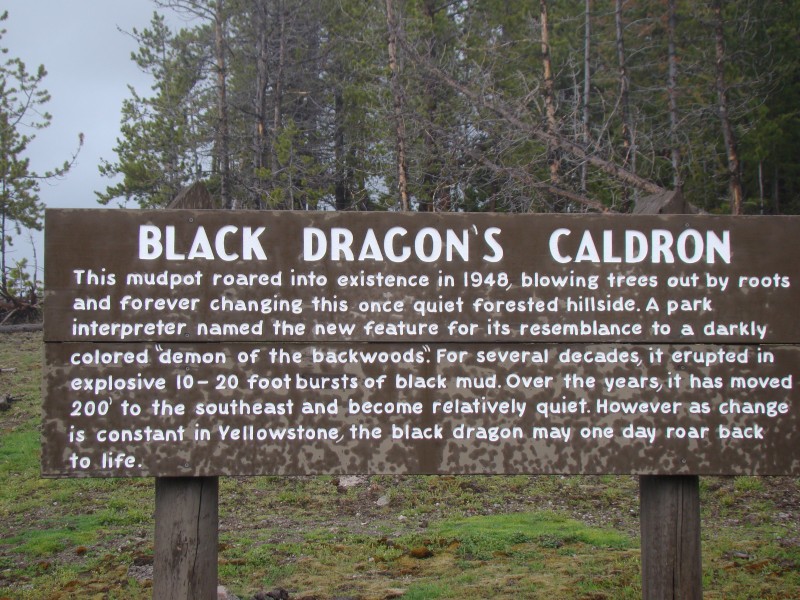 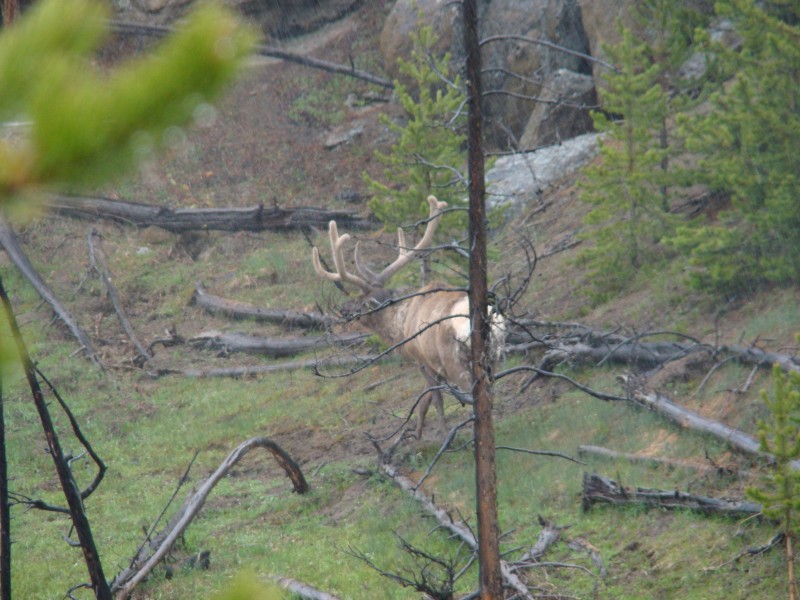 We headed back to the house and actually made it back by 7:30pm. Danelle started the chicken and rice dinner while most of the family went out shopping. Hogan helped cook, the kids played and watched TV. There was plenty of shopping time, since dinner was going to take an hour. So an hour later, dinner was on the table and they all walked in the door… Everyone liked it and there were no leftovers!

Over dinner, we were talking about the rafting trip and decided to double check the date — it was the next day, not what we thought it was. So we decided to make an early night of it.