Corvin was the first one up in the morning again. Danelle got up around 8:00 am to see Corvin laying next to Grandpa Monster on the sofa. Danelle was just about ready to take Corvin to the grocery store to try and get a start, but then everyone else started stirring. After waiting a couple of hours for everyone to wake up, shower, eat, and contribute to the grocery list. The boys went outside to play ice ball. This consisted of using a shovel to throw pieces of ice up on the roof and then swinging at them as they slid back down and off the roof. 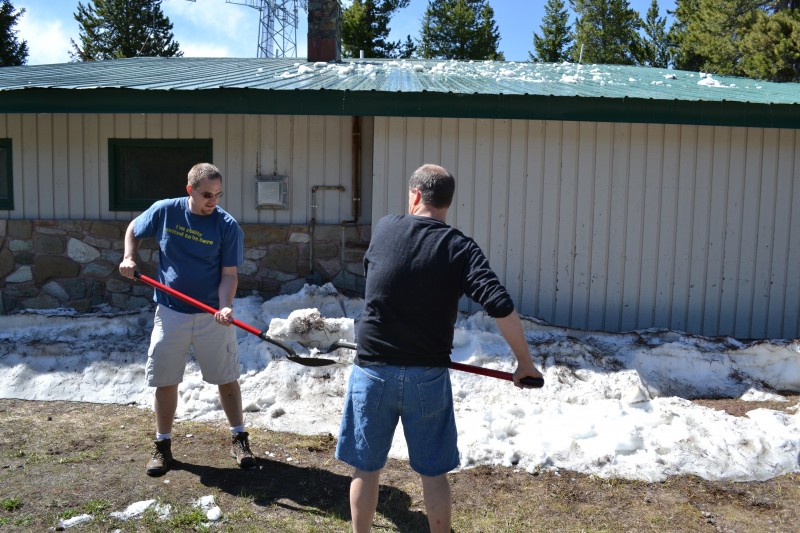 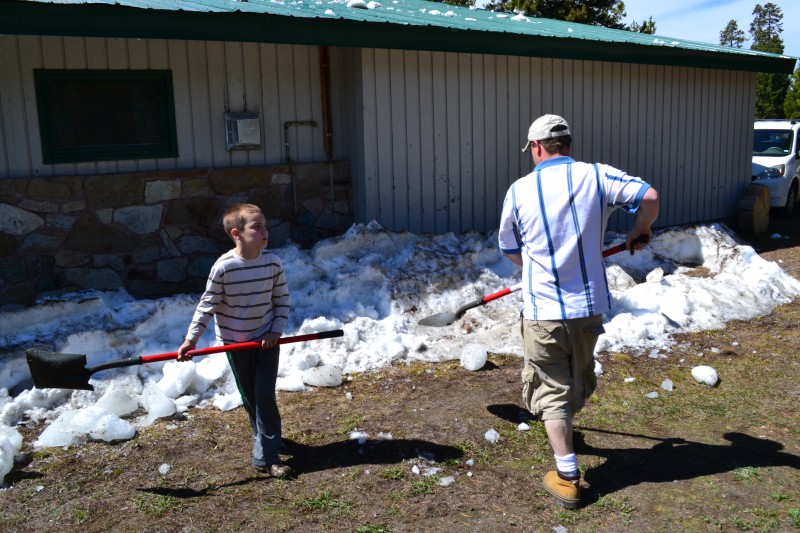 Danelle went for a walk at about 11 am to see something outside of the house. When she was almost back, Hogan and Kathy picked her up and they went to the grocery store. Less than an hour later, we had groceries for 4 days of 14 people.  Others had gone to Radio Shack for a couple more radios and a bit of local shopping. After we were all back and the groceries put away, we packed the coolers and headed out for our first daylight look at Yellowstone National Park!

Within a few minutes of entering the park, we saw and excessively photographed our first bison. On our way to the geysers, we saw a couple more herds. The first official stop was at the Fountain Paint Pot. After several jokes about people tooting, we braved the sulfur-laded gases and walked around to see the many types of geysers. They were Amazing! Additional excessive photographs were taken! 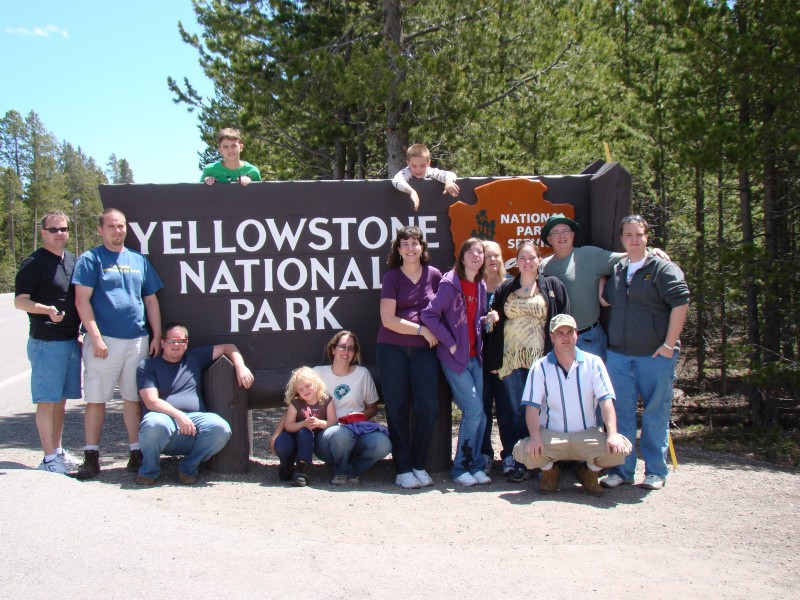 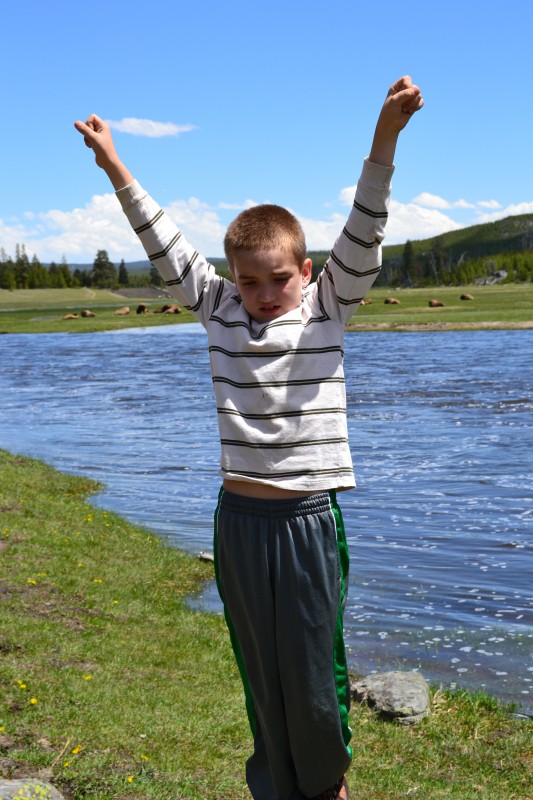 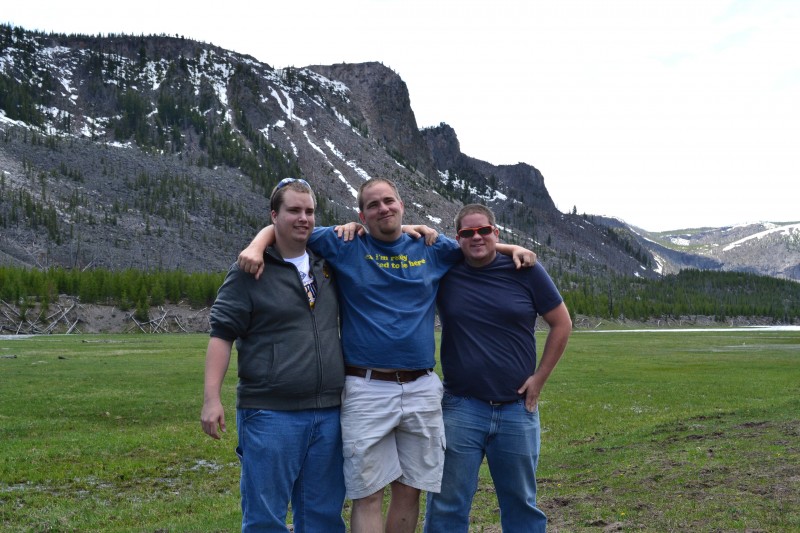 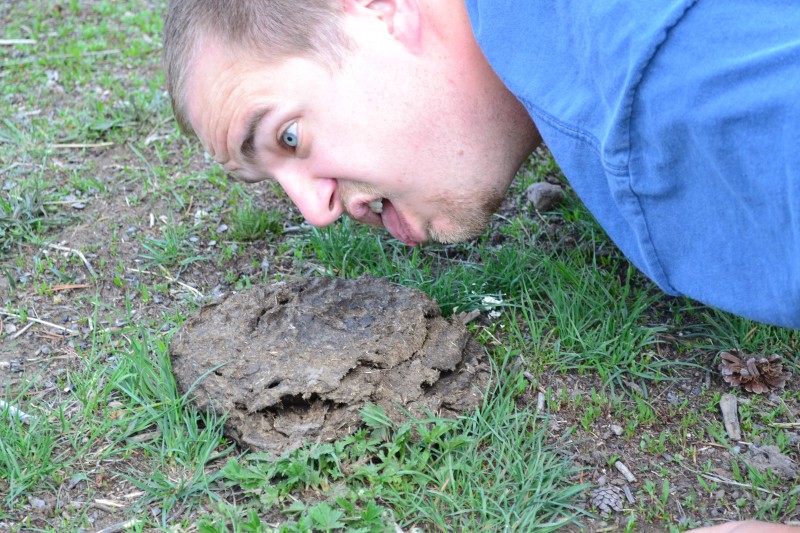 Our next major stop was Old Faithful. We kept being broken up into different groups and losing each other. Corvin and Grandpa watched a movie; Hogan, Danelle, and Sonora walked together on a short trail; Grandma, Bob, Tom, and others went on a longer walk; and a few went shopping or visiting other buildings. The visitors center was nice with the educational displays. We watched Old Faithful blow about 4:50pm. Bob and Pat say that it was less impressive height than previous visits. It is possible that they are right, but it could be that it looked smaller because the sky was cloudy and the steam may have blended with it. 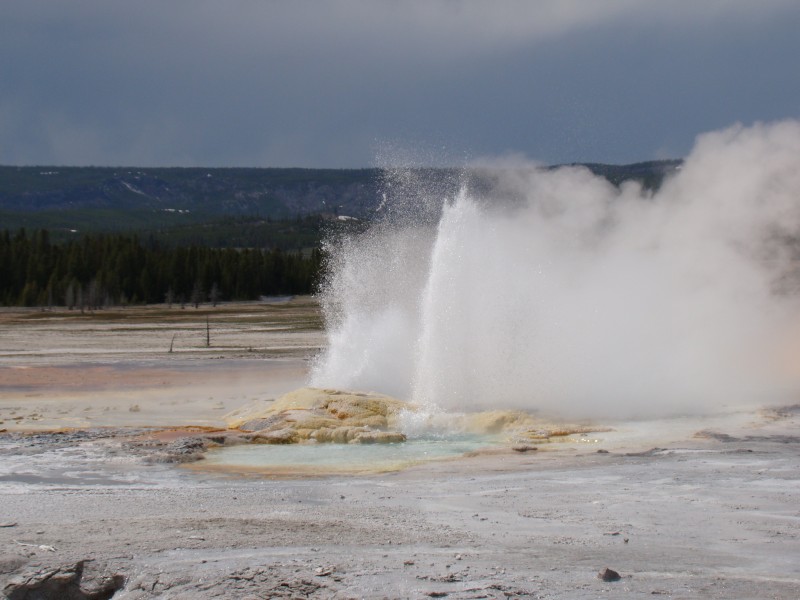 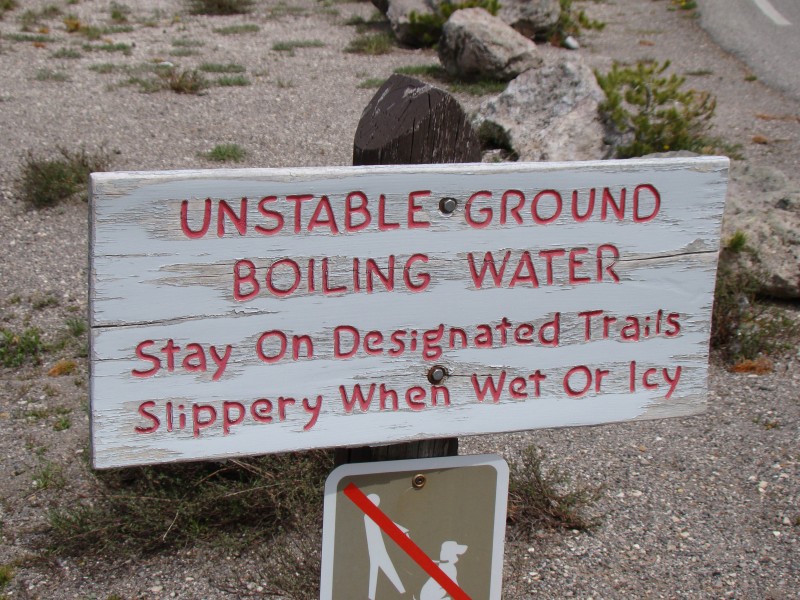 After we all met up again, we went to a picnic area and had a 6 pm lunch… Yikes!! We made sandwiches and had chips and veggies. While a few were finishing up, Hogan was picking up and throwing large branches (or entire trees) like javelins. Tom found some logs that were lodged in V shaped trees, making perfect see saws. Hogan, Bob, Tom, Danelle, Corvin, Matt, and Sonora played games and launched rocks, snow balls, and Corvin. Yes, we launched Corvin… Tom and Danelle held his hands while Hogan pushed down on the other end.

Next we headed back north to go to the Mammoth Hot Springs. On the way, we stopped at Gibbon Falls. The falls were beautiful, but Pat was terrified of the heights. She wouldn’t let go of the rail the whole time. With as steep as it was, it was understandable. We got to the Mammoth Hot Springs as the sun was setting. It was a bit cold and misty, so we walked the lower terraces which was a short trail. During their last visit, the trail was longer and the springs were mostly dry and white. This time, there were colorful bacterial mats and recent activity had caused them to shut down a large part of the trail. 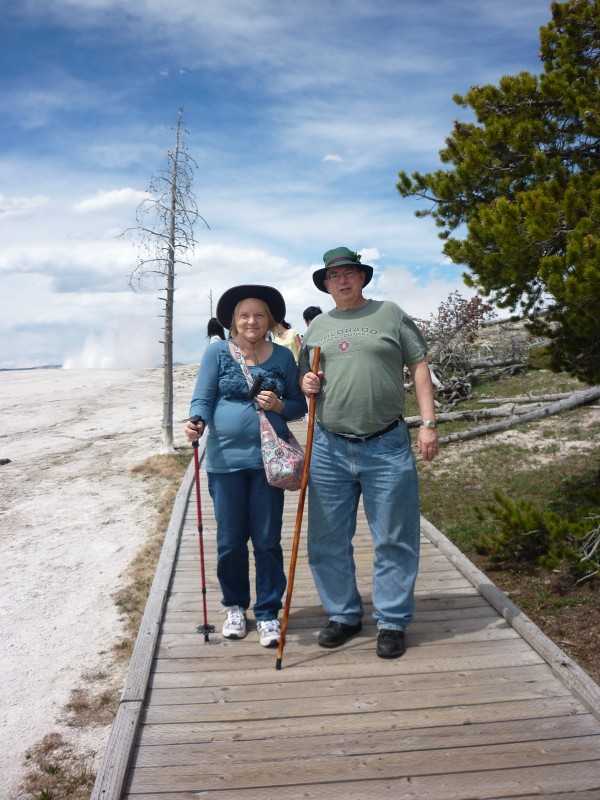 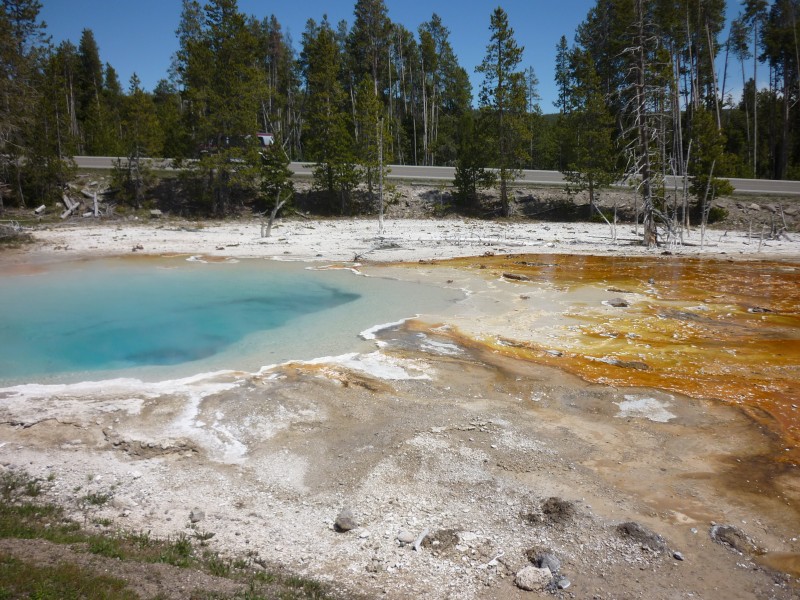 Our final stop for the day was the North Entrance to the park. This is where there is a much-photographed entry gate built in 1879. Almost everyone got out for random photos and rock climbing. At around 10 pm, we began the 54 mile journey back to our house in West Yellowstone. 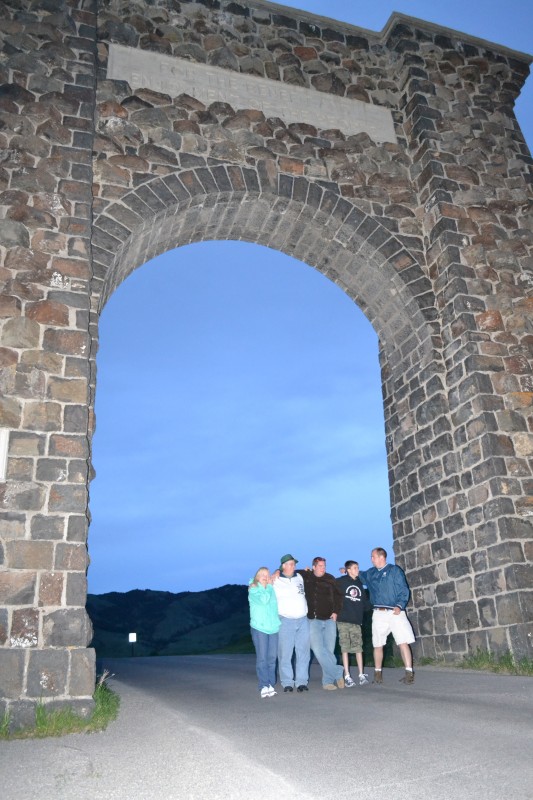 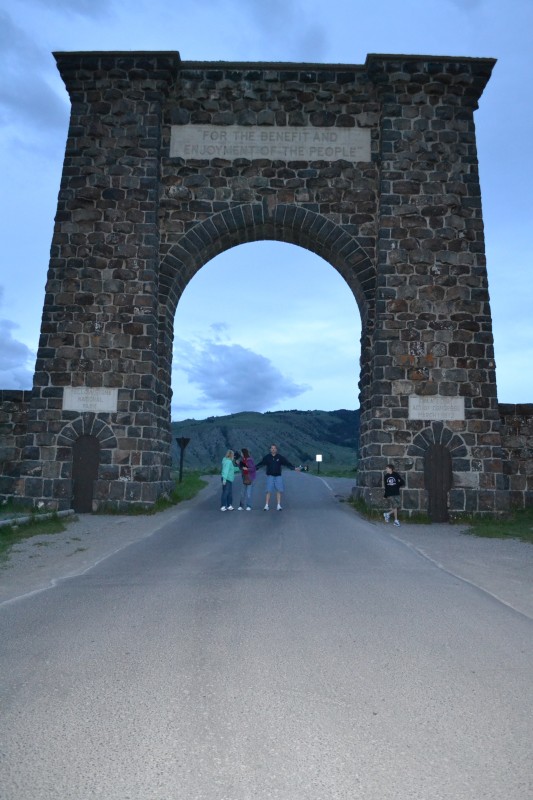 Most of us slept for a good portion of the drive, except for the drivers, of course. Somewhere along the last 10 mile stretch of road, a lovely herd of bison decided to meander along the road. The car in front of us had been the first stopped by the herd and they had their flashers on (which made sense when we first came upon them). After about 20 minutes of crawling along behind the flashing lights, we asked them to turn them off. It turns out that they thought the lights were annoying too, so everyone was happy when they were off. The herd was traveling slowly to the western gate. So eastbound cars just had to wait a couple of minutes till the herd went around them. We were fortunate enough to wait and wait and wait. After about 30 minutes , Hogan rolled down the window and gave a “Snorkie” growl. That got them moving a bit faster, so he gave a couple more. Then Tom gave a couple of deep dog barks ant really got them moving! A car came through from the other side and Tom barked again. Then the car started flashing!. It was a park ranger. The ranger pulled a U turn and led us around the herd on the right shoulder. The car ahead of us almost got stuck, but we all made it pretty quickly. A bed never felt so good!