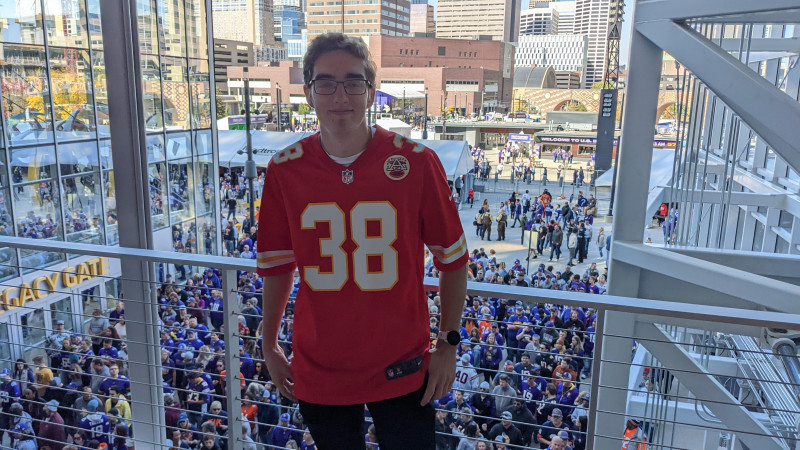 Corvin has been gone for about a month at school now. We’ve talked to him a few times, but mostly he is just away doing his thing. For his birthday, I was coming up to Wisconsin to see him and take him to his first NFL game.

It started off Friday evening after work. I packed the Virus and headed north. My plan was to drive a large portion of the way, and find a random place on the side of the road to sleep before continuing the drive the next morning. I could have stayed in a hotel, but I thought the adventure would be fun and I could always change my mind if I wanted to!

This plan is all well and good if you stop during daylight when yo can identify a nice spot to stop. I was driving till at least 10 pm to make the most of my evening, so stopping in the dark is harder. After a few places that didn’t feel right, I found a scenic overlook. There was nobody there and I parked to call it a night. I had a sleeping bag that I crawled into. It wasn’t perfect, but good enough.

About 3:30 am I finally woke up cold. I turned on the car and the heat and went back to sleep. By about 4:30am I had enough and was completely awake. I dressed in the car and grabbed a quick photo of the moon as it was getting ready to set. 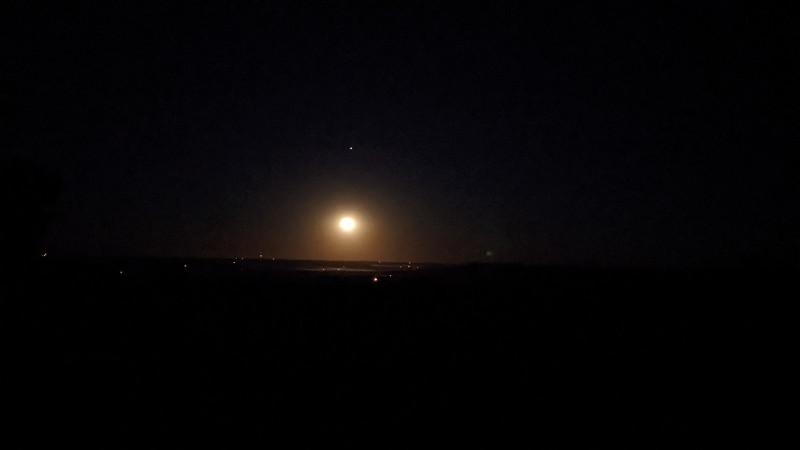 The drive then continued. I grabbed coffee at a gas station several miles down the road and drove casually. Of course not being in a hurry, I stopped at another scenic overlook. It said it was closed, but the gate was open and I went up and up. I got a great photo of the fog on the Mississippi river before heading on. 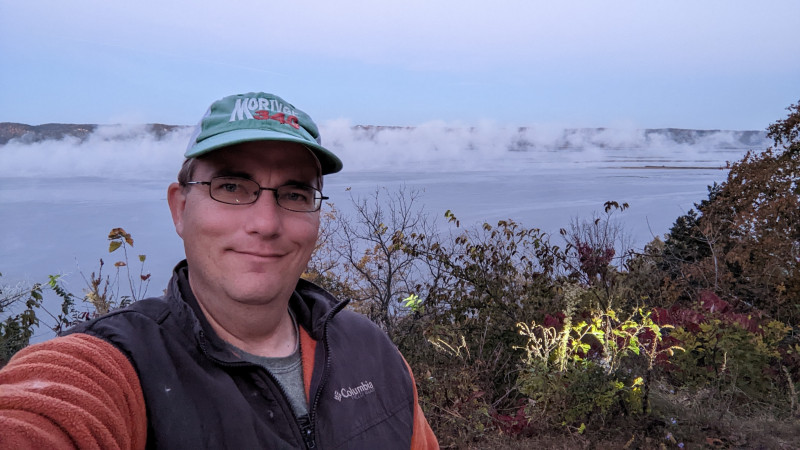 To say I was early for Corvin was an understatement. I took the photo below at 7:30 am in his dorm parking lot and texted him of my arrival. 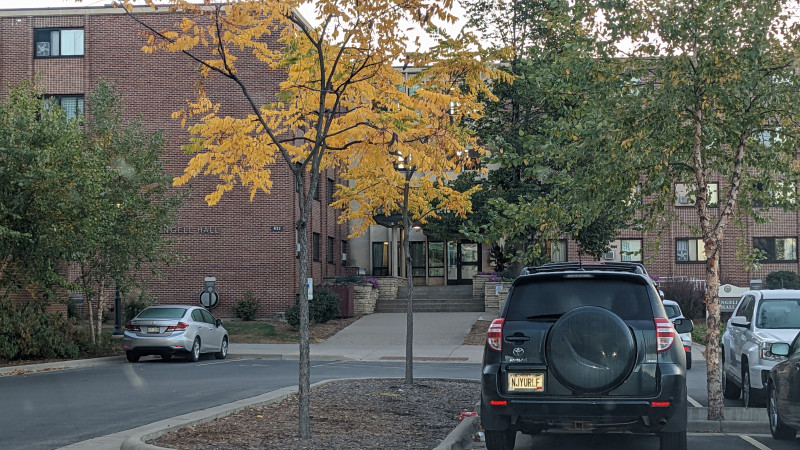 Corvin is typically an early riser, but I didn’t want to chance waking up his roommate with a ringing phone. Turns out that Corvin was just starting to wake up and it took him about 15 minutes before he came outside.

After a warm embrace, we headed out to get breakfast at a local diner. The food was delicious and we had a wonderful conversation catching up after a month. Initially the plan was to drive to Minnesota and play disc golf followed by sleep before the NFL game on Sunday. However, Corvin’s foot was bothering him.

Spending time with Corvin was the goal, so changing plans was not a big deal. After breakfast, we drove to Grandad Bluff to check out the view. I had him open his birthday present that was a rechargeable hand warmer before going out. We hiked around and enjoyed the view. 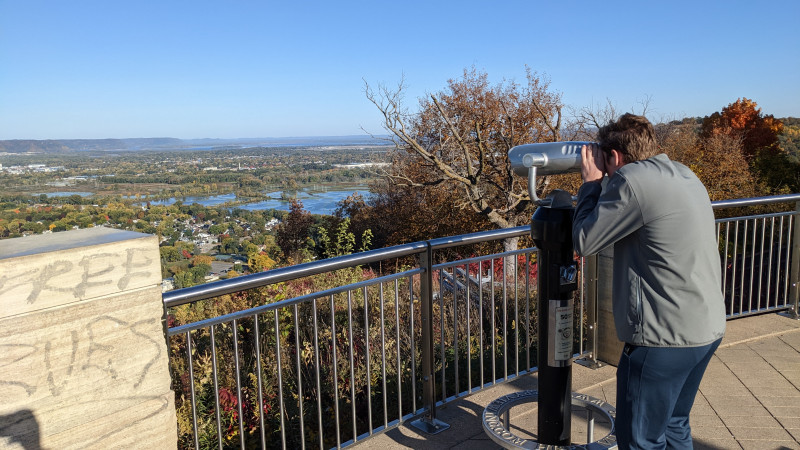 Here he is climbing where my old bones were not interested in going. 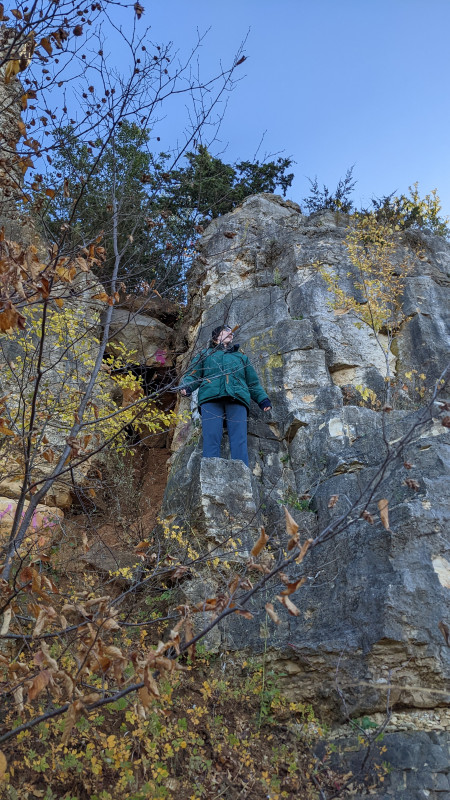 We played 9 holes of disc golf laughing and stopping long enough for Corvin to make himself dizzy on this playground equipment. 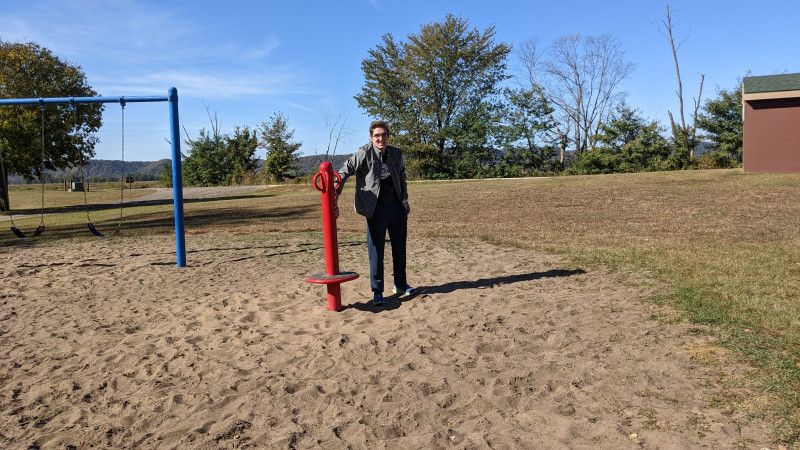 Next round of business was going back to the dorm and packing for the short weekend away. Corvin had homework he needed to do. Also, Danelle made him Chiefs cupcakes. He ate one, then proceeded to walk around the dorm giving the rest away.

With the Virus packed, we started the 3 hour drive to Minneapolis Minnesota. It didn’t take long before Corvin was tired and he slept while I drove. He slept about half the drive but was great company. He asked if we could meet Emma his friend from high school for dinner and I said yes. I suggested a price and said I would pay for all of our meals in that range. A plan was formed.

We went straight to the meeting spot and were early. A short walk around the surrounding neighborhood put us there right on time. Emma showed up right at 6pm. 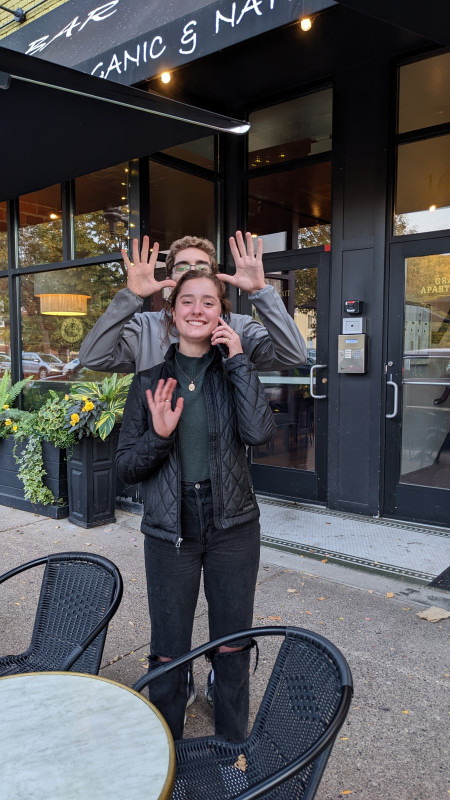 We stayed with Emma from 6pm to just after 10pm. It included a short tour of Macalester College. Corvin got to see her dorm room which looks like most dorm rooms.

The next morning found us hanging out in the hotel room while Corvin worked on his school work for a bit. 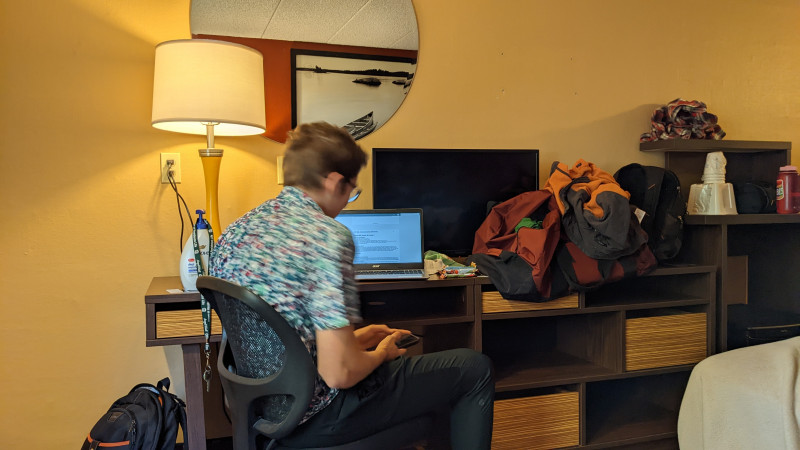 Once checked out of the hotel, we grabbed some food so we wouldn’t eat at the game and found parking about 2 miles from the stadium for free. We walked along the Mississippi riverfront most of the way.

Then we got or first glimpse of the stadium. 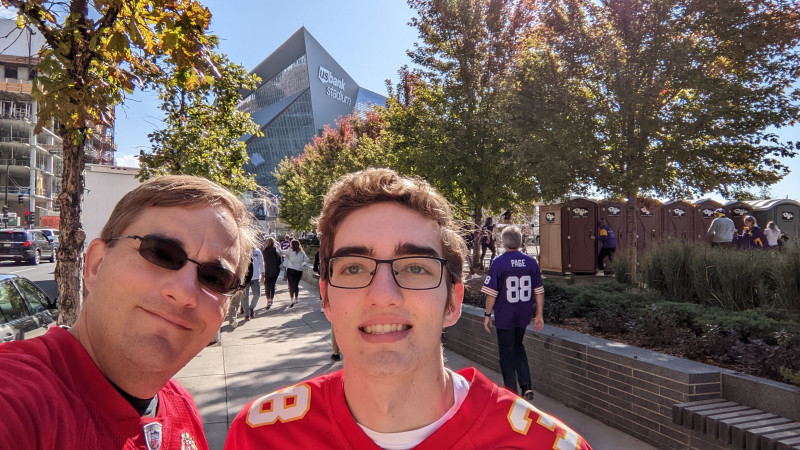 It seemed to take a very long time to get in, and then looking down at the crowd still not inside yet. 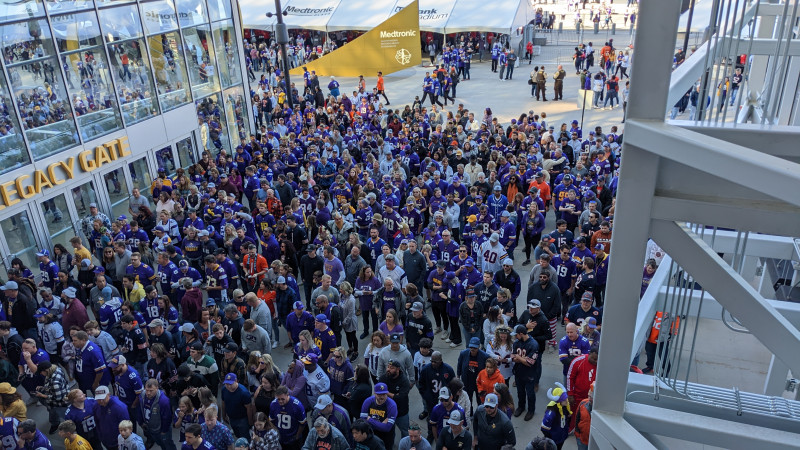 Yes, we both wore our Chiefs jerseys.

A view from our seats. Not at the very top, but not far away either. 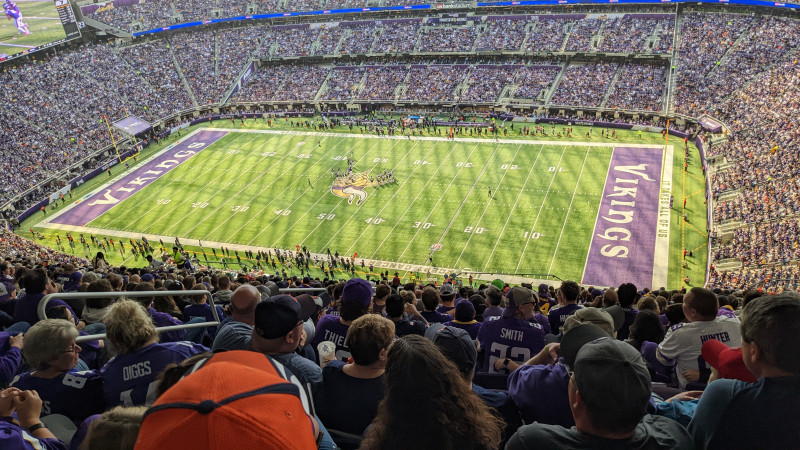 A quick shot after the game was over. 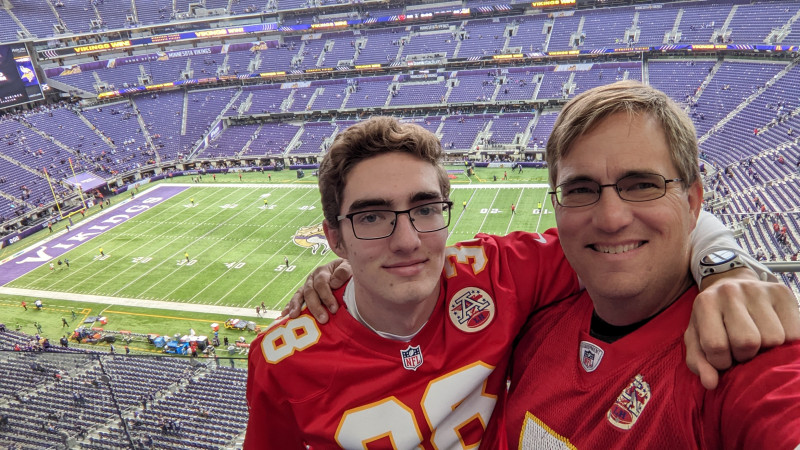 We decided to get closer and went down to the front row after the game to get this shot before heading out. 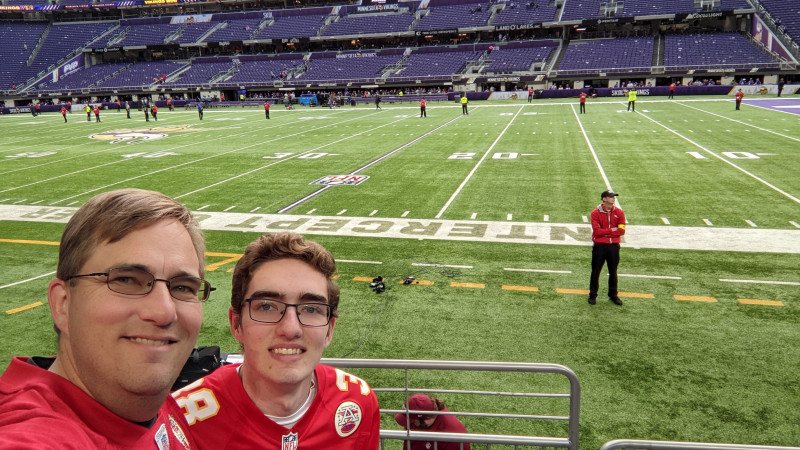 We lucked out with it being a day game. We started the drive back in daylight and nearly made it back to Wisconsin in the light. Corvin was going to sleep, but we ended up on a phone call for a bit talking with my parents that kept him awake.

I got dinner in the school dining hall with Corvin before heading out to start my drive home. I had an amazing birthday weekend with Corvin, but it was time to get home. I did more of the same driving home trying to find a place to stop and eventually finding one. I took Monday off work, so there was no concern about getting back at a specific time.

This was just what each of us needed after being away for a month. It’ll be Thanksgiving before I see him again in person. I treasure each moment I get to spend with him!