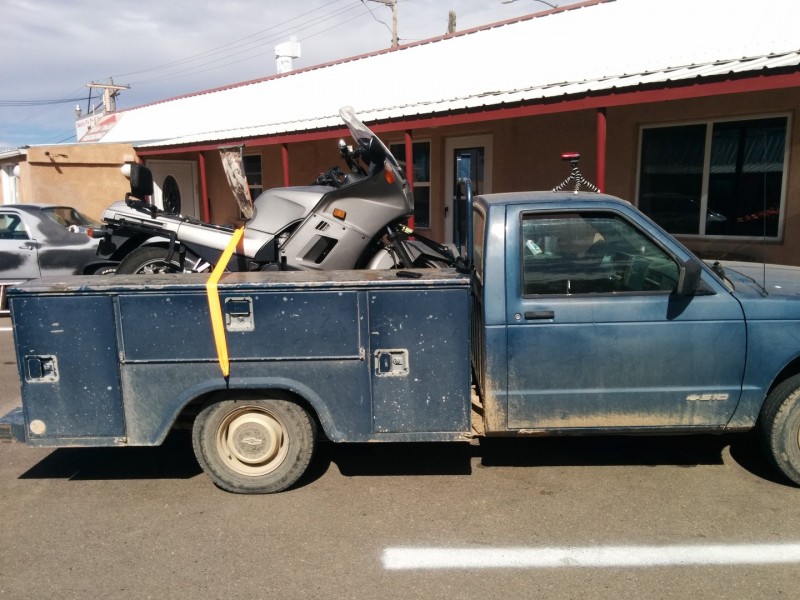 The first half of this day was the most frustrating day of my whole trip. I started with me waking up and trying my best to sleep in. The motel was nice. 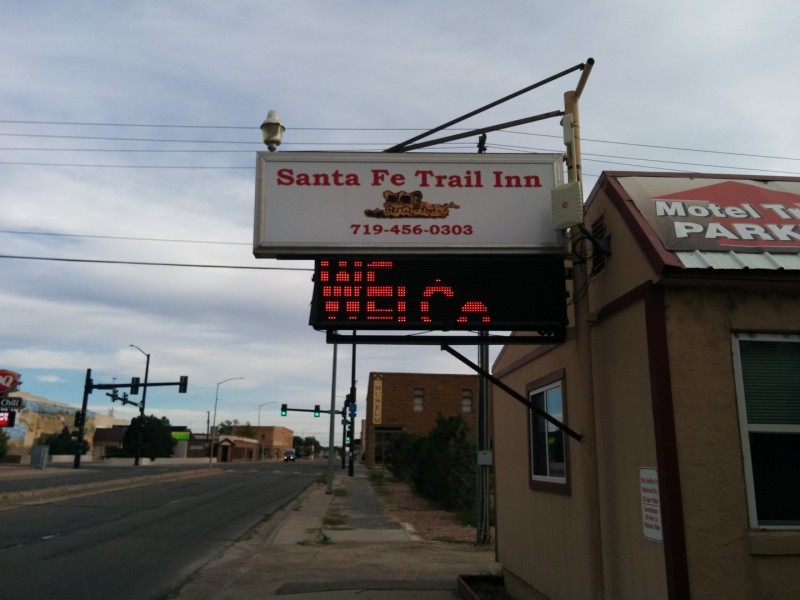 When I couldn’t take sleep anymore, I went to Dairy  Queen for breakfast. I then walked to a hardware store and picked up straps for later and returned them to my room.I walked around town waiting for the bank to open and found some people moving a whole building. 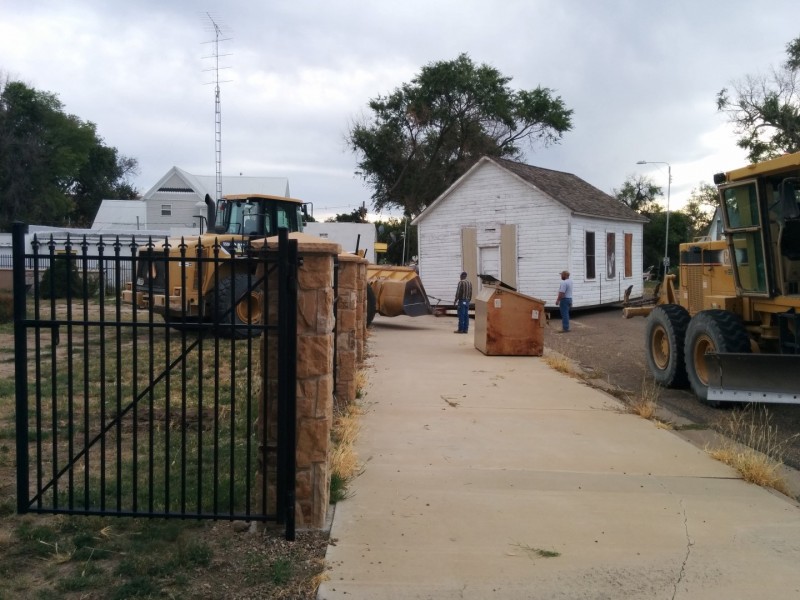 At promptly 9am, I walked into First National Bank to see about getting cash for my new truck. It turns out that getting your money out of a bank account is rather difficult if you’re not starting at you’re own bank. While I had the cash, they didn’t know it and did not trust me. They were not interested in giving me a loan. It was suggested that I go to Western Union for the money. After lots of frustrating and waiting, I ended up setting up a new account for one deposit and withdraw. Then I had my mother-in-law go to the bank and transfer money to me. Thanks Carol!

With cash in hand, I was much happier! I called the owner of the truck. For the second time he said he needed to put a shirt on and then would come over. Once he arrived, we moved the motorcycle over and tried a simple test run and decided we needed help. We were going to the office of the motel when the proprietor came out smiling and said he saw us on camera and wanted to come out to help.

In the end, I started the bike and stood next to it and drove it up into the truck. I relaxed once I got the kickstand down and we started tying it down. 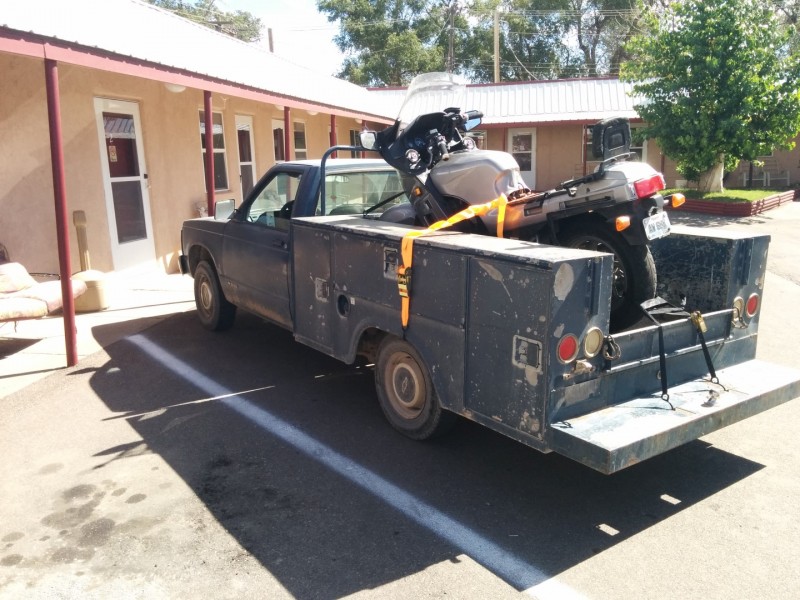 With my new fancy truck, I made my first stop at Napa to get a new headlight for the burnt out one. Then I started a very slow drive home. Windows were down and the radio was on. I attempted to roll the driver’s window up and it came off track and was stuck 1/4 of the way up for the rest of the trip. I stopped in a small town farm store to purchase an additional tie down as it was quite windy in western Kansas. So windy in fact, look at the dust obscuring the grain elevator! 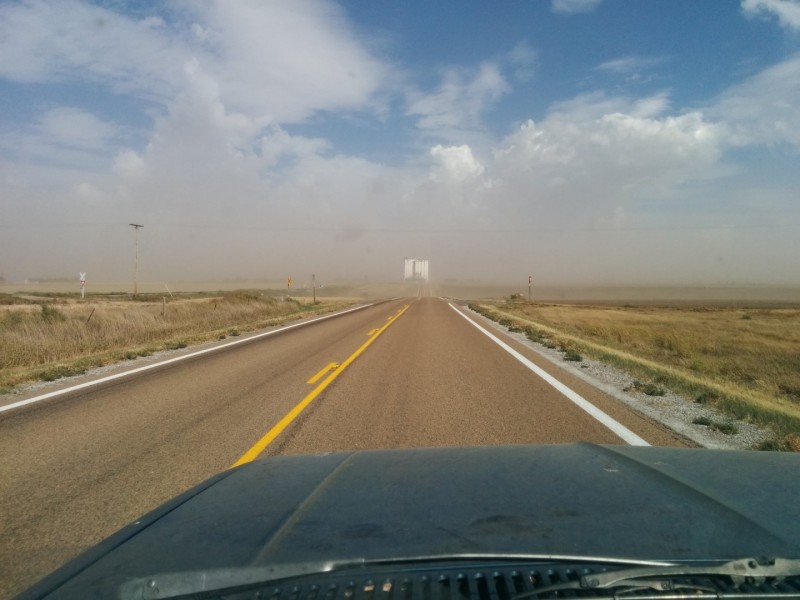 I almost forgot to mention, I never made it to see Holly. Since the truck was an unknown, I wanted to drive on I-70 as much as possible in case it broke down. Along the way, I was able to see Henry in his apartment in Manhattan, KS. Then I made a quick stop at Hannah’s college dorm before stopping in KC for the night at my parents house before a final push home to St. Louis. 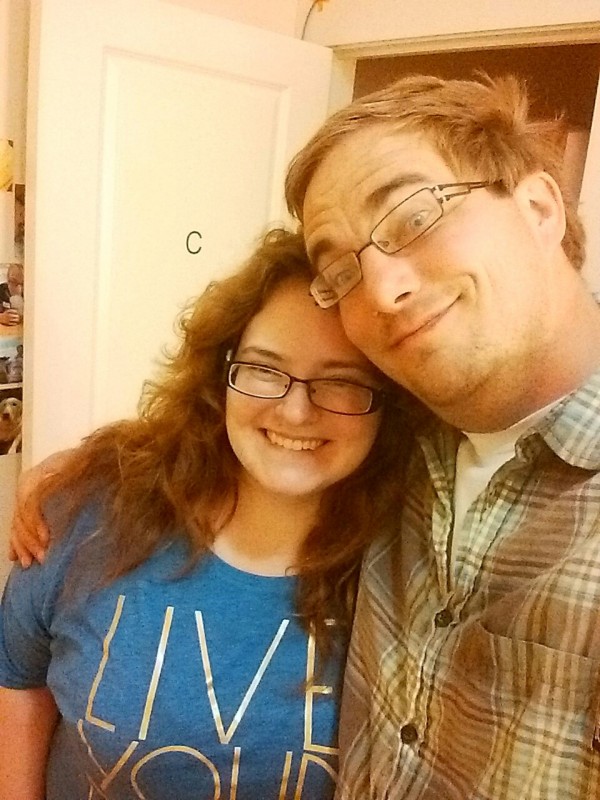 I did make it all the way home the following day in time to have lunch with Danelle. Then I drove to Flying Tiger Motorcycles to drop off my bike for repairs. I left them a long list of repairs and had the shop guys unload it from the truck.

It was a perfect if not slightly expensive trip. I hope to travel solo again in the future but with better results!