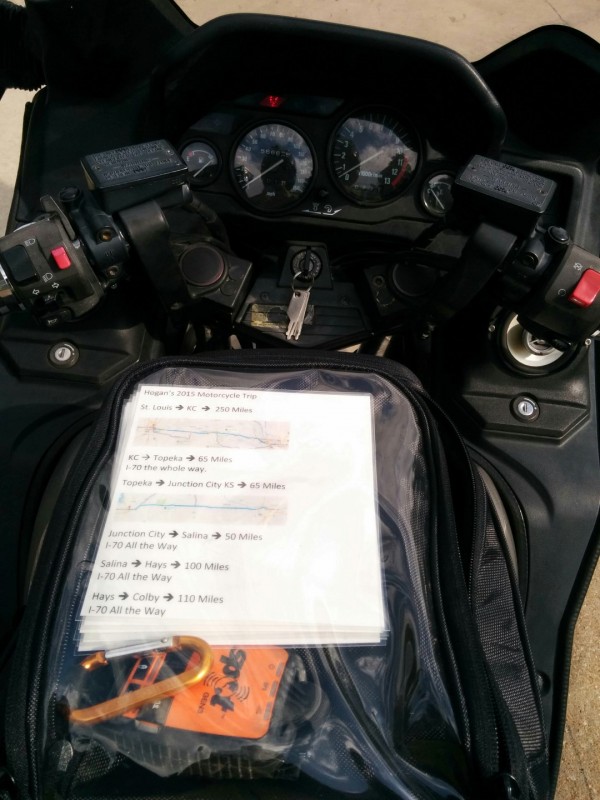 Today is the start of a multi day trip via motorcycle to Colorado. I’ve been planning this trip for a few months and the time finally arrived. The goal for the day was to get out of work and get on the road asap, making as many miles as possible the first day so I had lots of time in Colorado for riding.  The document below is the document I created for the trip. Its basically a city to city plan of where I want to go. There are a number of cities on the way out so I can decide if its worth pressing on or not.

Around 10 am, I had finished all of my assigned tasks at work and asked my boss if I could take off a bit early for the day (was planning to take a half day anyway). Since it didn’t’ make sense to start anything new for an hour, he sent me on my way. I was quite excited to get home and trade the minivan for a loaded motorcycle. I put on all of my gear: riding jacket, gloves, armored pants, and helmet. I placed the printed notes from the word doc above in my tank bag. Then turned on my Spot Tracker, put my phone in airplane mode and headed for the interstate! 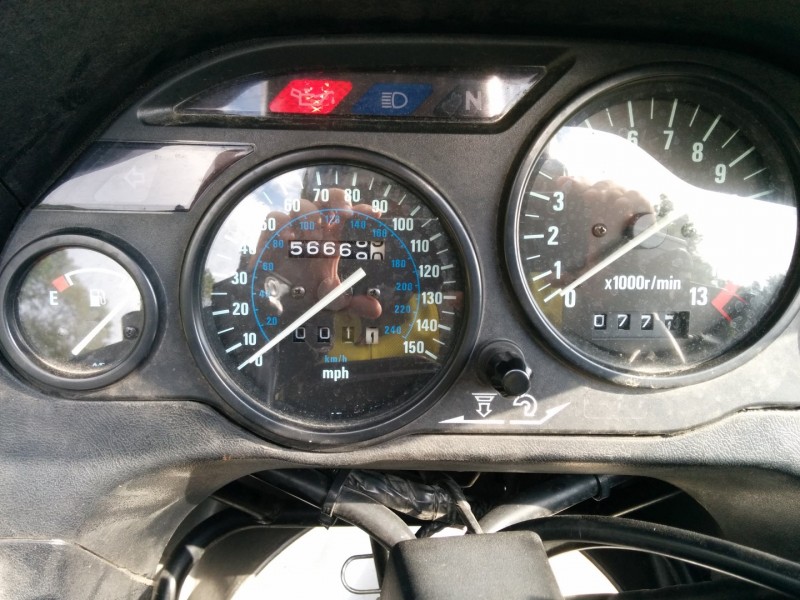 I took the photo of the odometer so I could keep track of the distance I would ride during the trip.

I had overcast weather and ended up putting on my rain suit about an hour into the ride and topped off the fuel tank and got lunch. Since I didn’t have anybody with me to complain, this would be the first of many gas station meals on this trip!

Around Kansas City, I encountered rush hour and had to sit in traffic, waiting for a fresh accident and lots of rubbernecking. During the traffic jam, I unzipped my Tour Master Elite II one piece rain suit to navel level. Eventually traffic started flowing and the wind cooled off my sweating body. But only a few miles further back at highway speed, the wind started catching the open suit and made it difficult to hang on to the bike. I was able to zip it back up one handed after a few tries.

If there is one thing that I dislike, its interstate toll roads. The only one I would encounter during my ride was on I-70 in eastern Kansas. Once at the gate, I had to stop and grab a ticket. But in order to stow the ticket, I had to take off a glove. On the end of the toll, I again had to stop and take off wet gloves. Then I grabbed the ticket and paid. It took me about the same time as 5 cars going through due to my equipment. Eventually, I gave up on the wet gloves and rode a short distance sans gloves away from the toll gate to the shoulder to get out a dry pair of gloves before continuing on.

I have not been to western Kansas since 2002, so a lot had changed. There were tons of wind farms collecting power from the wind all around me. I forgot how windy it got out there. In fact, I apologize to whoever ends with some of the trash from my gas station diner late in the day. I set the paper down on the motorcycle and it was gone before I could think to catch it.

I ended up going about 650 miles and ending up in Goodland, KS for the night. I found a nice hotel right off the highway. While I can ride at night on the motorcycle, I prefer not to if I have a choice for safety. Now I was in mountain time zone. What a great start to my adventure!