I got a phone call the day before about a couple who were coming down from Canada canoeing across North America. They needed help understanding what to do with the Chain of Rocks on the Mississippi river. There is a canal to go around the chain, and they were hoping to get some information about it from a local. I called the phone number and talked with Pierre. The connection wasn’t great and English was not his first language, but he spoke it well.

My recommendation was to run or portage at the chain and to stay out of the canal. While there is nothing illegal about a boat going through the Chain of Rocks Canal, if they were to encounter a barge or two, there is nowhere for a small craft to seek shelter from the large waves. See the map below for the difference in width between the canal and the Mississippi river.

After giving them my opinion about the portage. I wished them luck and hung up. I called Jo back (who initially had me call them as I had done the chain before) to tell her how it went. She stayed in contact with them. I told her I would be willing to help them portage if she knew when they would be getting there.

I got the phone call from Jo that they were expected to be at the chain around 2 pm.  I left work and let them know I would be having a long lunch. I drove straight up to the chain. Once there, I hung out looking for them to show up. It looked runnable based on past experience.

I got a call from Jo telling me she was going to be late and that the were almost there! I scouted and waved them in to shore and held the rope while Jennifer and the dog jumped out followed by Pierre. I told them I would hang out with the boat while the went up to scout the chain. They decided together not to take any chances and portage. The boat was moved to a location better for passing gear for a portage and we began moving stuff from the river up to the parking lot. In the process, two strangers even joined in to help out.

Jo arrived during this process and we all pitched in. Getting the boat up was harder as the river was muddy at the shore, but it worked out. At the top we hung out and talked. Jo wasn’t working and they made plans to meet up down by the St. Louis Arch later. With much trust, they loaded much of their gear and supplies in Jo’s van with the promise to meet down by the arch. They were planning to stay in St. Louis for a few days and they were looking forward to having a lighter boat for a bit. 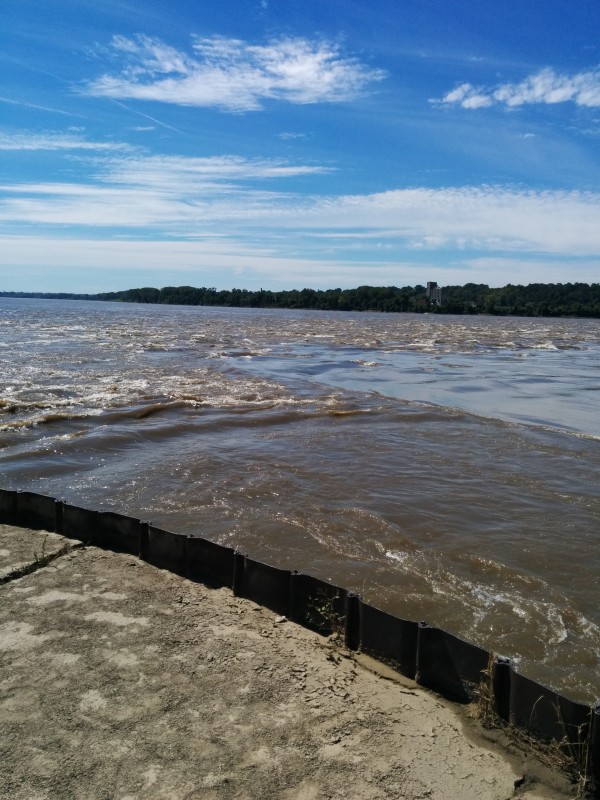 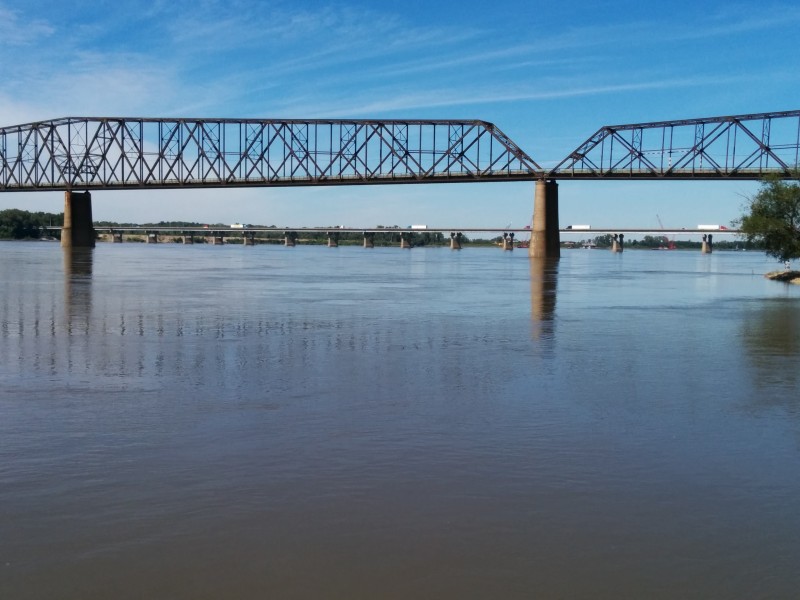 We finally carried the boat to the other side of the chain and sent them down towards the arch for the rest of their journey. 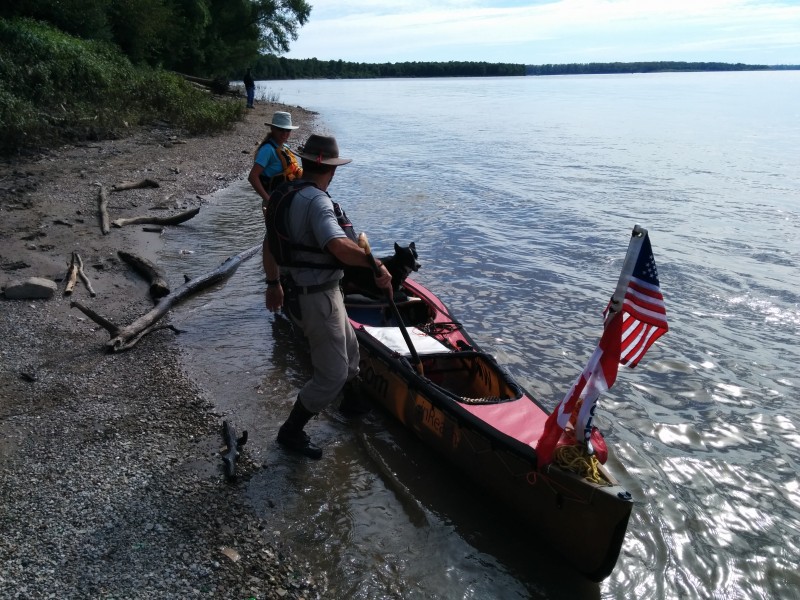 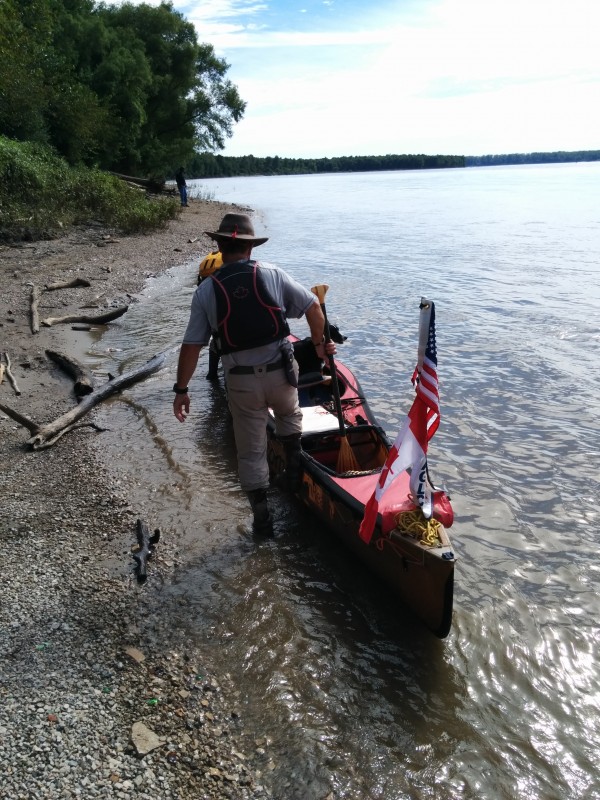 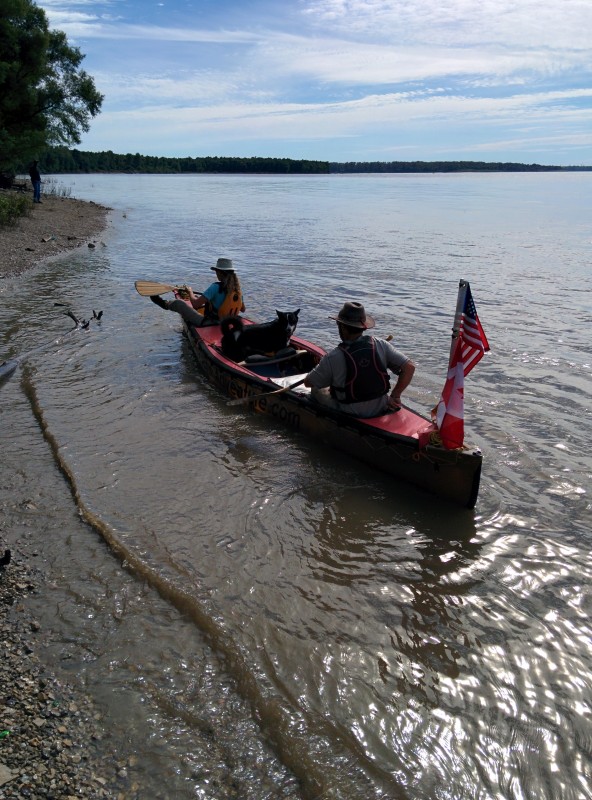 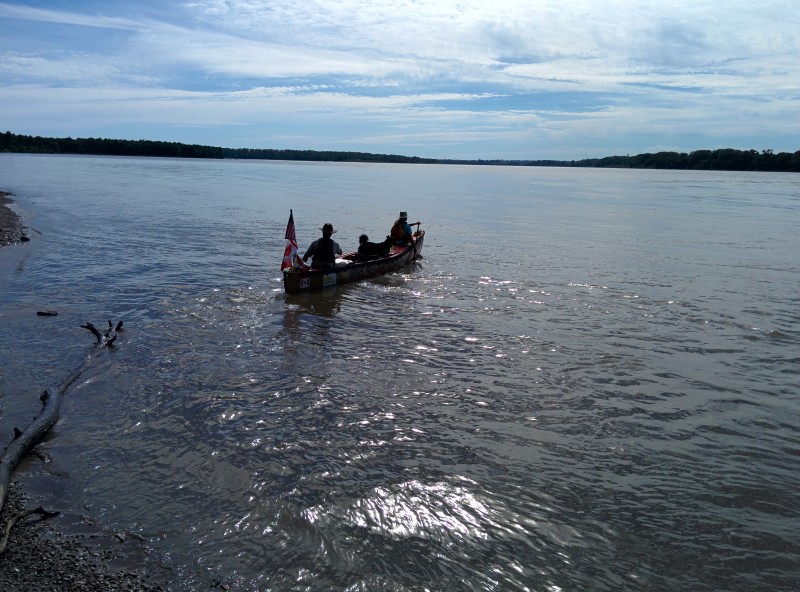 I was quite satisfied to be a small part of a very large journey. If you have time, I  highly suggest checking out their website to see what they are up to now.