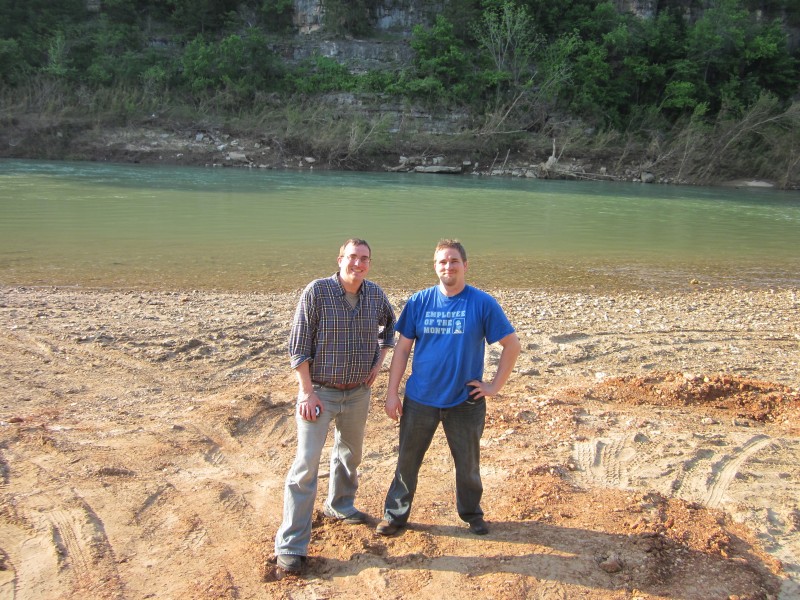 Sunday, and we are just starting to get into the riding groove. Its our third full day on the road and Hiatt and I are getting used to this life. The road waits, and all we have to do is wake up and eat breakfast. So we head down to breakfast for the second day in a row. We’re pros at this point getting at the food that we’re interested in. After a filling meal, we headed back to our room. That was when we saw some true Arkansas ingenuity. I have no words for this, so I’ll just show the photo. 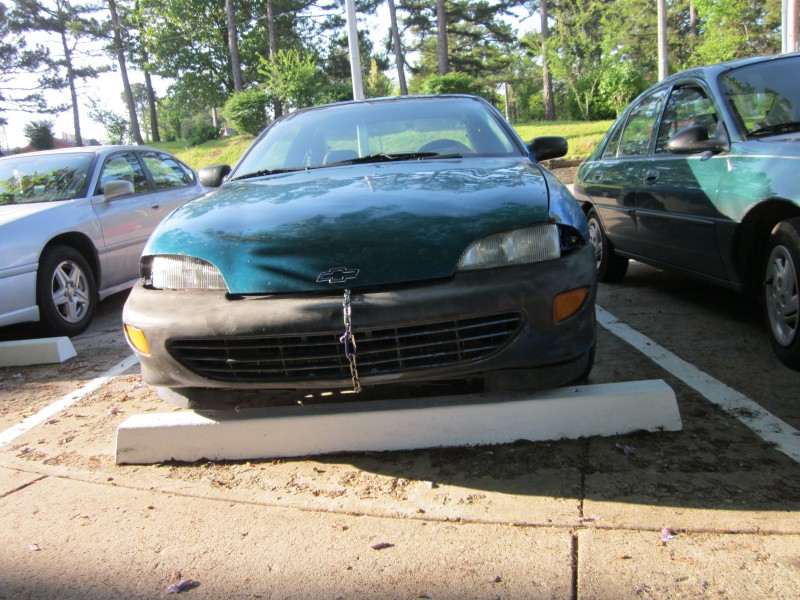 We took Rockhouse road out to Berryville where we ended the previous night. This is a nice back road route that was lots of fun. A narrow two lane road encroached by trees. Those trees created eery early morning shadows! Hiatt was in the lead and took off like a rocket, occasionally slowing down to make sure I was still alive. I was uncomfortable with the texture of the road and the shadows to go too fast, so I took it relatively easy. At the end of this short diversion, we headed to the nearest gas station to fuel up and consider the rest of the day. At the gas station was a group of 4 riders doing the same thing as us. The license plates had them from Wisconsin, so they were on quite a journey!

We decided to re-run the 215 to Oark route because it was quite fun the previous day. This time, we would run it backwards and see it from the other direction. Its amazing to me how much faster things seem when you have already seen them before. This route passed by very fast. We were less worried about where we were going and discovering new things. Riding backwards on the route was like getting revenge to us. We focused on the turns that we didn’t take as well the previous day and not getting lost like yesterday.  We skipped the town of Oark and just made the turn to stay on the major path. If you’re wondering why we would re-ride the same route again, it may help to look at the pictures that follow. They best describe the roads we were on. The last photo of the group is Hiatt’s back tire. The dark spot is the portion of the tire he has been riding and shows just how far he has been leaning into the turns we have been riding! I would be lying if I said that I didn’t ride aggressive today either…

We stopped near the end of this route to have lunch at a Sonic. We just can’t seem to get enough being outside on this trip! Of course this is Mother’s Day (a made up holiday), so we called mom and both got to say hi to her. Then we proceeded to call our wives and wish them the same. Of course, we could each hear in our wife’s voice the need to have us home soon. We had been gone for a few days, one of them celebrating them. Of course, we can’t thank them each enough for allowing this trip! 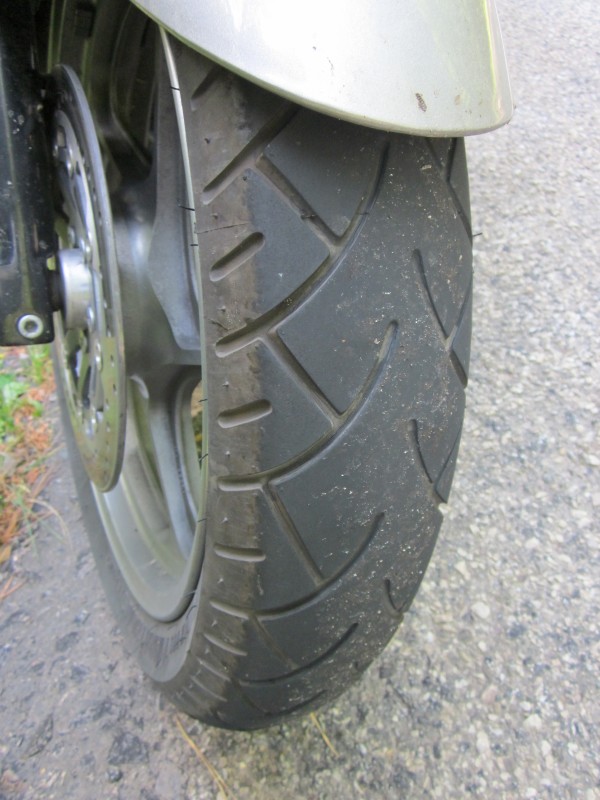 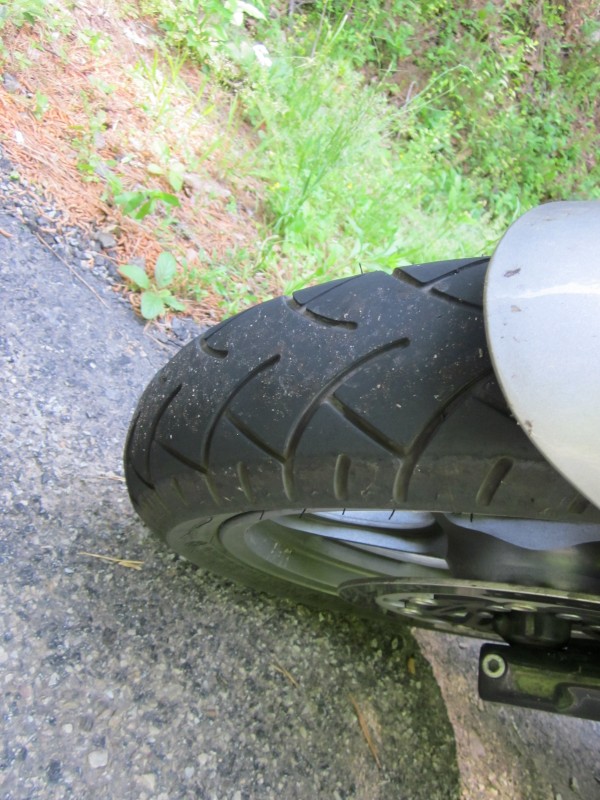 At the end of the route, we were back in Eureka Springs. We had decided that we need to end up near Harrison, Arkansas at the end of the day to facilitate getting home earlier than planned on Monday. That would make the girls happy, and that is always a consideration for each of us! The plan was to head towards Harrison and run the Mountain View route from the pamphlet and be back in Harrison that night. Of course, to get there, we could take the Rockhouse Road route again… So off to Rockhouse we went. I took the lead this time, but was a bit lethargic after lunch and road at a more civilized speed. My lack of speed turned out to be a blessing. Around a nearly blind left hand turn, there was a red truck that was backing out of a driveway that just seemed to be parked, blocking the road. As I slowed, it finally pulled back into the driveway and we passed without issue. Had the truck been there earlier in the morning, it could have been a much different story!

Not being that far from Harrison, we figured we would finish off the day with the Mountain view run and finish in Harrison where we started this adventure and get home to our girls early. We ran the route backwards from the directions on the map, but were getting good at it by now. The drive down US 65 South was long, straight and fairly boring. We had a near run in with a police officer for speeding in Harrison and decided we better take it easy on the larger highways. Going the speed limit after the last couple days was difficult, but we didn’t want to add any donations to local cities (tickets) to the expense of our trip. At this point, I was starting to get saddle sore from all of the riding we have done. I was ready to get off the bike and walk around. We came over the top of a hill and there was a very long downhill of at least a half mile. I was probably doing 5 – 10 over when I crested the hill with light traffic and let off the throttle. There at the bottom of the hill was a Highway Patrol officer waiting for people to speed down a hill. As we passed the bottom of the hill, eye contact was made, and he didn’t look to happy to see us pass. I watched in mirrors as we passed just waiting for him to come after. Once out of site, we may have speed up a bit just to add some distance. Then we found a place to pull off and rest.

There is nothing quite like canoe country. The rivers are peaceful and everyone seems happy. We stopped and walked down to the river to relax and stretch our legs. And *maybe* there may be girls where there are rivers and canoes… 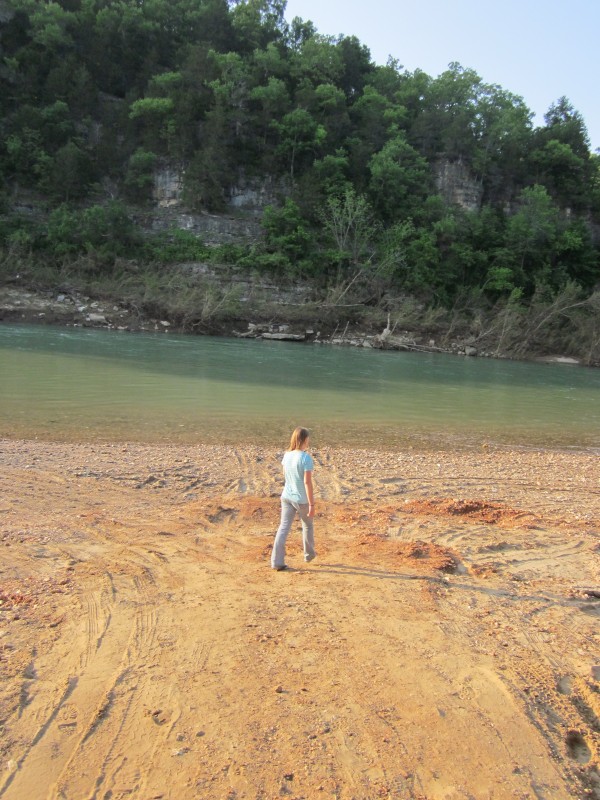 Back on the road, we were rewarded with nice mountainesque views. At the far end of the route, Mountain View Arkansas, we turned up the scenic road to head back to Harrison. This road was secluded. So we may have speed up. Being that few cars were on it, I saw a couple of snakes on the road warming up before the evening. We made one more stop at a river to stretch our legs and had a treat. As we pulled in, the road was gravel and quickly went down into a large lot. I went first and had no trouble with the gravel. Once parked, we walked around and took pictures. Then we met and talked with Tabatha. She was a young cute girl looking for her grandmother who run a canoe outfitter on the river. It was a nice discussion that kept us off the bikes longer.

When we arrived in Yellville, Arkansas, it was getting dark fast and we were tired. So we found a hotel and decided to call it a night. This was the first no-name hotel, but it turned out to be just fine. Staying in Yellville positioned us to do part of another route from the trip and get home early to the girls on Monday night. Once settled, we went out for pizza. We sat outside and enjoyed the sunset and the 4 cars/trucks that we driving around town showing off. 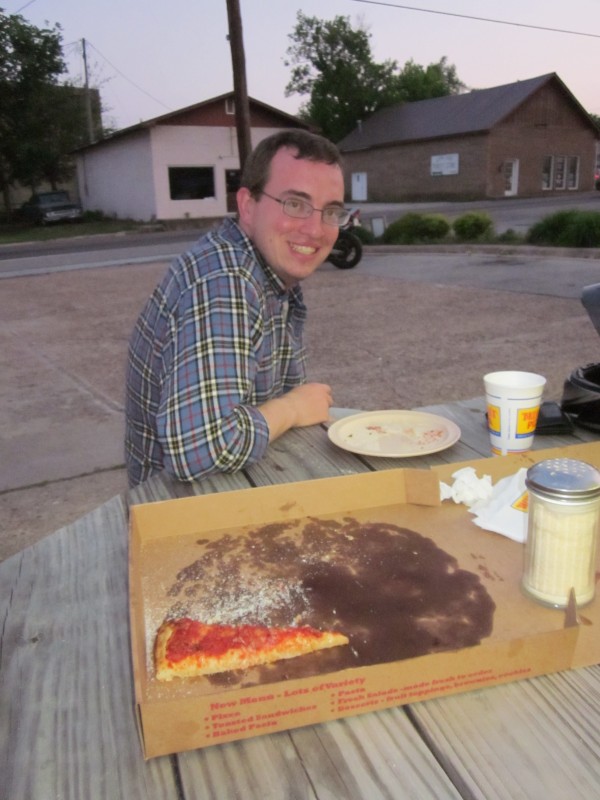 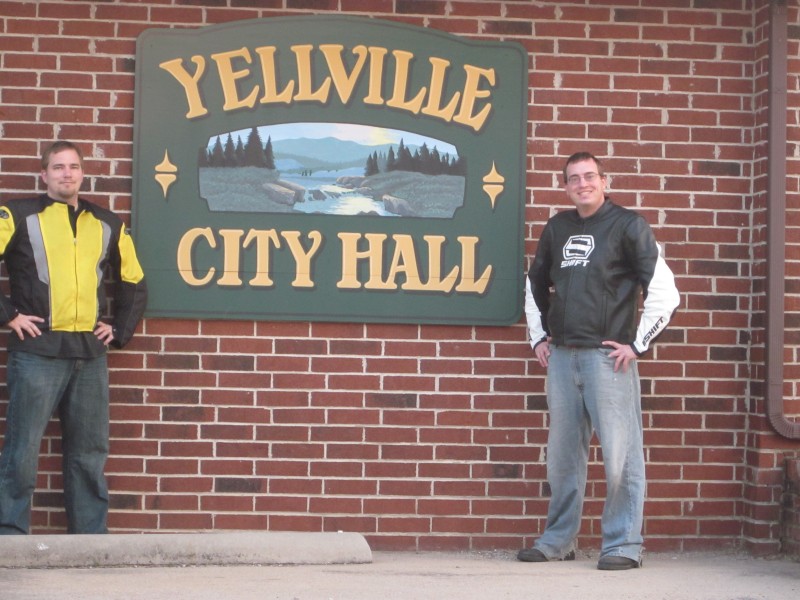