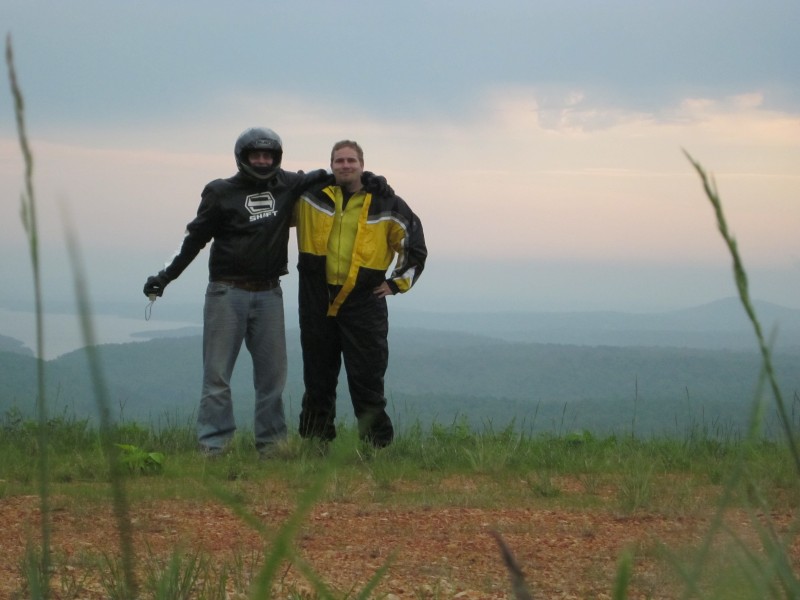 This is it. Its Monday and our last day of motorcycle madness. I’m getting used to the lifestyle but my reality tells me that there are more important things than the road for me today. Two kids and a wife await my return. They will never fully understand how this trip has changed me, but I will never fully understand how they missed me [I hope]. With the excitement of the last day, Hiatt and I wake up at 5:30 am to make sure that we get in our motorcycle riding and get home at a fair time to the kids. The hotel we’re staying at doesn’t have breakfast included. In fact, this is the first that had an actual key to the door. With a quick look to ensure that we have everything, we lock and close the door with the key sitting on a table next to the bed. There is palpable anxiety between both of us to get moving and experience this day. The feeling is like an hourglass weighing down on us to be home before the sand runs out.

Gas station breakfast is what we decided on. I was starving, but Hiatt wasn’t as hungry and wanted to get moving and on the road. So we ended up at a gas station. After much deliberation, we purchased 2 chocolate milks, 2 Gatorade, and a six pack of donnetts. I wanted to get two, but Hiatt said that he only wanted 2. I figured I could get by on 4 of them until we had lunch. It wasn’t like we were exerting a serious amount of physical work and I don’t exactly need the calories, but I did appreciate them.  So we walk out of the gas station and Hiatt calls his wife to say good morning and reassure her that we did actually plan on coming home instead of riding forever. While Hiatt was on the phone, he had one of those deep conversations with Colleen that caused him to pace back and forth. He kept coming back and taking donuts from the package. These type of conversations need to play out, so I gave Hiatt all the space he needed. By the time it was all wrapped up, he managed to eat 2 extra donuts, leaving me with only 2, and him eating my 4. This is exactly the opposite of what I expected and wanted to happen. I resigned to the fact that i was fat and could deal until lunch 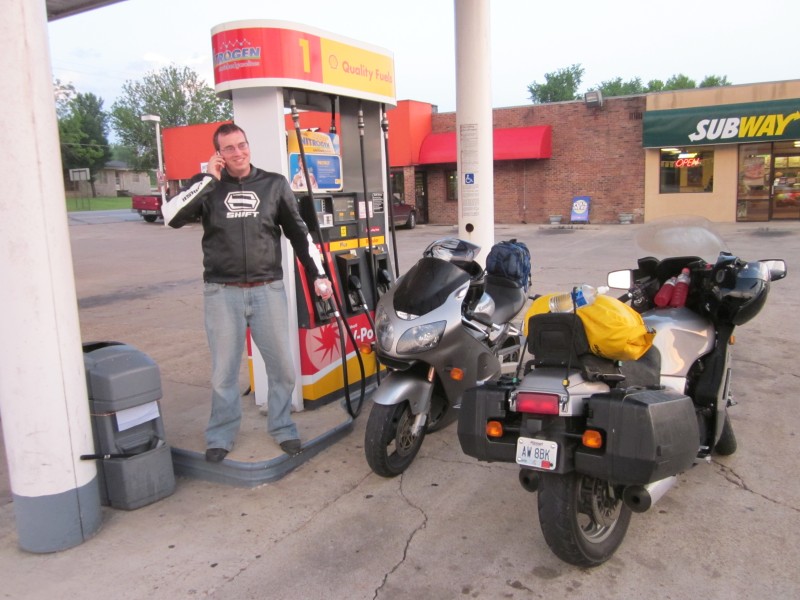 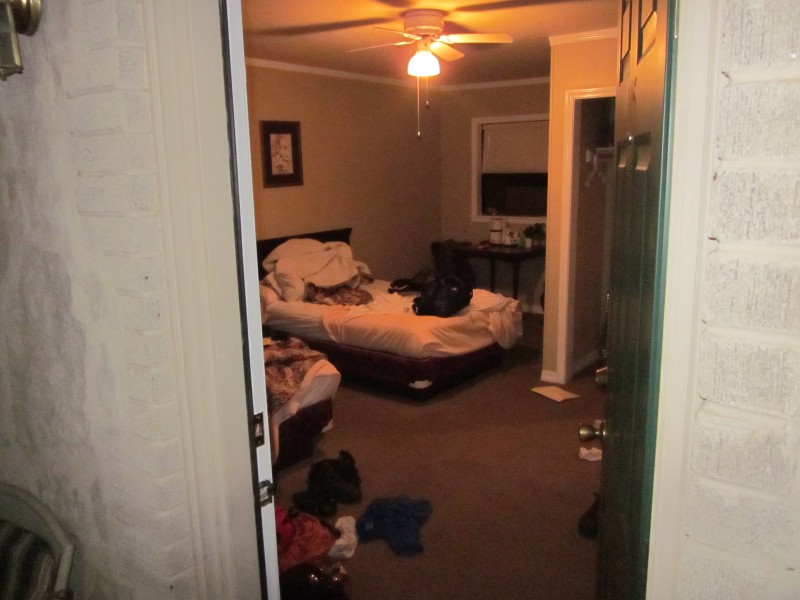 The Peel Ferry route would be the last of our trip. Being at Yellville placed us right at the start of the really fun parts. Within about an hour’s ride, we made it to Bull Shoals Dam.  We enjoyed the over the dam and stopped nearby to walk back over and check it out properly. We were amazed by the construction and size of it. Riding by in a car or motorcycle doesn’t really do it justice. Walking across and looking over the edge brings to life the sheer size. Then with the tripod in place, we got a photo of us with the rain that was coming for us!

After going over the dam, I finally stopped after several raindrops and put on my rain suit. Hiatt covered his tank bag and resigned to the fact that he would get wet. And with that, we were off to the Peel ferry. As luck would have it, the rain didn’t last that long. I ended up hot and sweaty with my older brother telling me about how if you prepare for rain, you’ll get it… Being a Boy Scout in my past, I preferred to be prepared than a wet rat. It worked for the start of the trip, but now, it made a bit of a fool out of me.

Dry and happy, we rolled up to the Peel ferry. This had to be the highlight of the trip for both of us. We rode the motorcycles right up on the ferry and hung out as it crossed the lake to the other side. As of the writing, the ferry is a “free” service provided by the Arkansas Highway department. We were all pictured out until we hit the ferry, then we took a ton of photos. Below is just a sample. 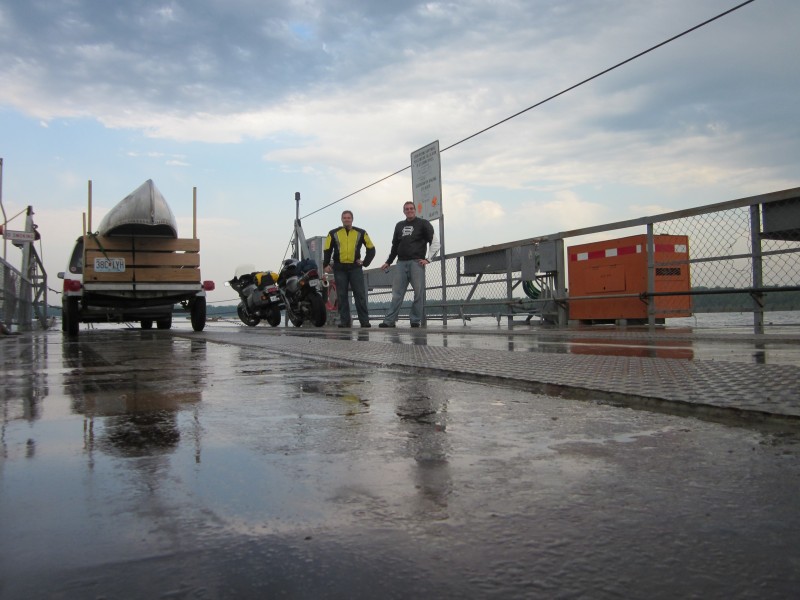 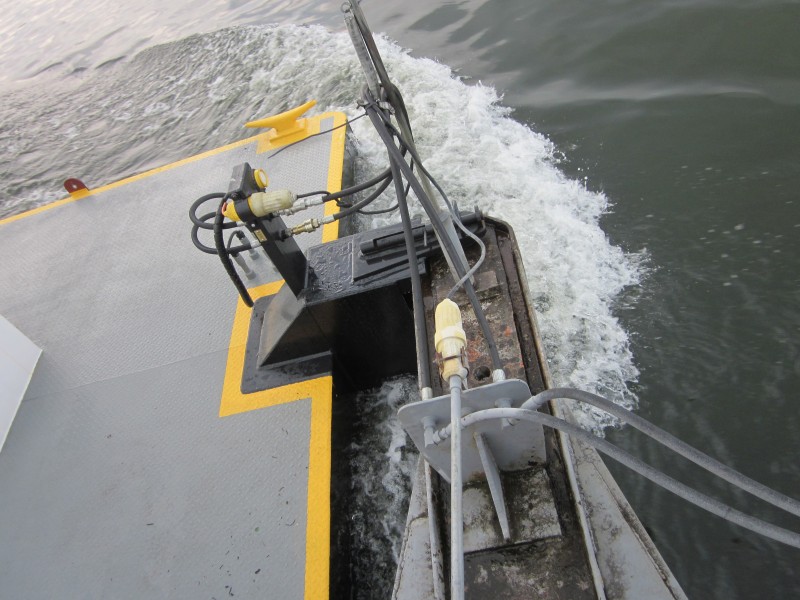 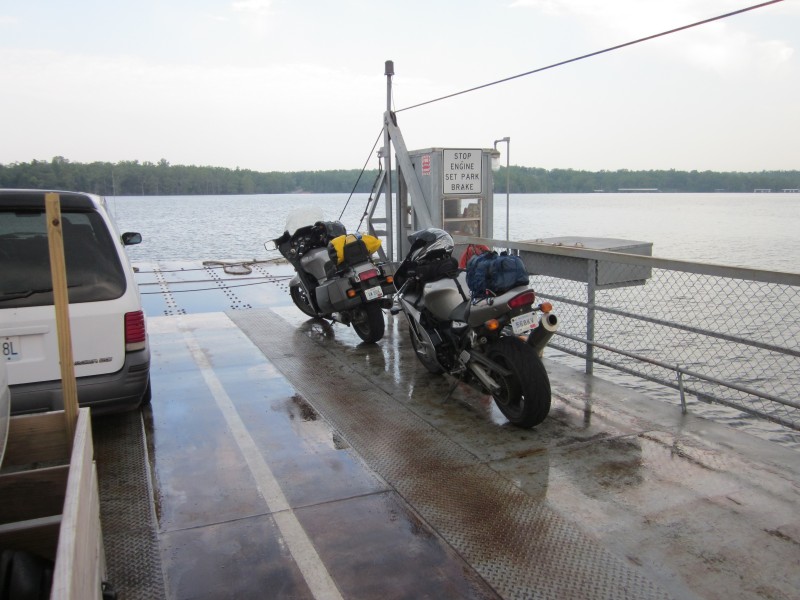 After crossing the ferry, I took the lead, heading to Forsythe, Missouri to think about lunch. Along the way, we speed like we were running from the cops! Per our rule, any time we got near a town, or the speed limit changed, we always went the limit inside of the city. This generally protected us from tickets, and made it safer for us and everybody around us. In one such setting where we were going quite slow [35 mph], we came across what appeared to be a school group picking up litter on the side of the highway. They were surprised to see traffic on the road, and Hiatt and I are a sight with our black face shields. With all of our safety equipment on, its impossible to tell who is on the motorcycle. The kids watched with great care and appeared to be exited as we passed, so I did what any maniac would do. I down shifted to second gear and ran it all the way out to red line and did the same with third gear. This placed me a bit over the posted limit and quite far away from the group where I coasted for Hiatt to catch up. He wasn’t far behind, but my actions did surprise him! Being the nice brother that he is, he did the same, once he realized what I was doing 🙂

The city of Forsythe is up on a hill overlooking the lake and it had a fantastic view. As we drove through, I looked for a restaurant with a view. It was to be our last meal together and I wanted to make it count. I started getting worried as the road came and went from the hillside. That was when an idea hit me. I saw a sign for a scenic overlook ahead. A Subway restaurant was between the sign and the pull out. It was time for a picnic.

We didn’t realize it was barely 10:00 am when we went into Subway. There were no crowds or lines, and the time explained it all. With only 2 of my 4 promised donuts, I was ready to eat! We each got a sandwich, chips and cookies. With our food packed, we went on to the overlook which didn’t disappoint. The view was exactly what we needed! A mostly quiet lunch with time to talk and relax. After sandwiches, I realized that we didn’t get our cookies. Hiatt was quick to volunteer to go back and pick them up. There were cute girls behind the counter and he wanted seconds 🙂 I was quick to let him grab the cookies. I had taken my helmet and gloves off so many times, that I didn’t want to think about it at that moment!

Our peaceful lunch ended and we rode out near Springfield for our last gas stop together. Hiatt and I filled up our tanks and said our last goodbye before we headed off. Of course we had about 10 more miles of the same road before we split off in our individual directions. At the last turn off, I raised my hand in respect and sadness as our trip together was over.

Just because our trip was over, I still had a 3 hour ride ahead of me to get home. I ended up taking three different rest stops on the way home. My butt and legs were quite sore from all of the riding of the trip, that I just could not take it. Of course, stopping is not without merits. I got to see an El Camino with a chicken on top, and talk to a truck driver about his fuel truck. While fueling, I saw that an exhaust bolt was coming out of my bike. Ohh the work to be done. 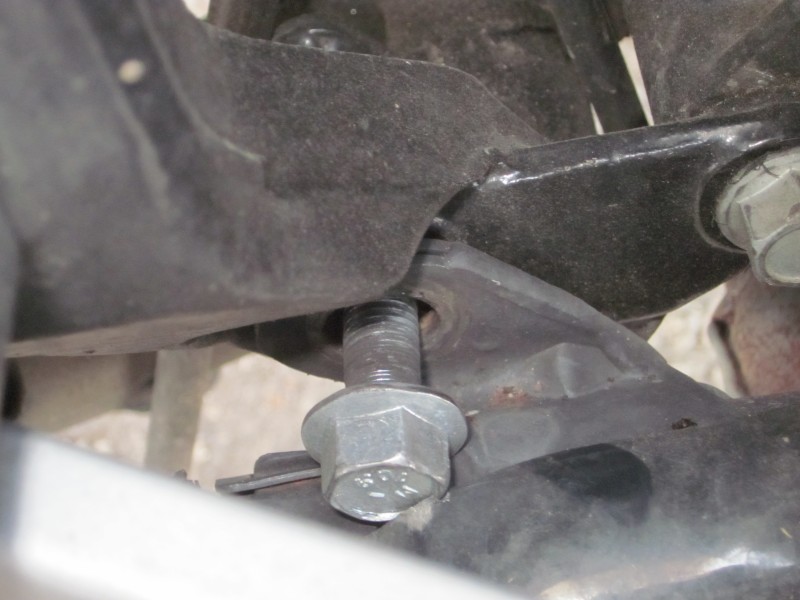 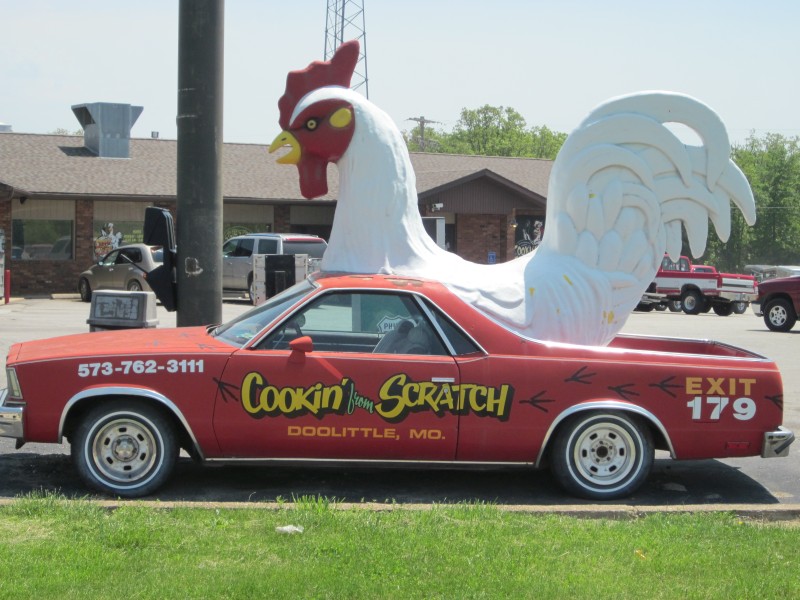