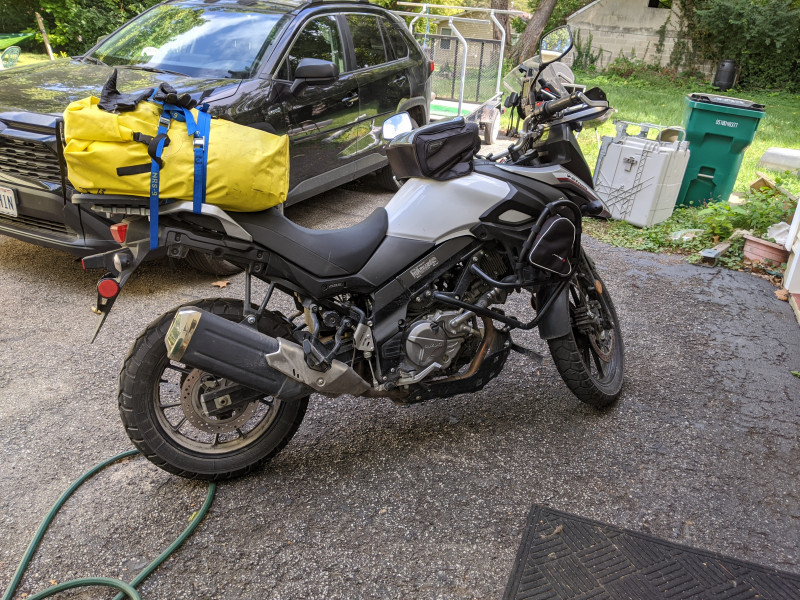 Adventure Palooza is an annual motorcycle ride put on by Adventure Riders LLC. This is their 4th year putting on the ride and it is growing in attendance each year. The format of the ride is to have 4 tracks, North, South, East, and West that start in their corresponding direction and converge on a family farm in Mexico, Missouri. A significant amount of time is put into each track to make it the most enjoyable off road motorcycle riding possible.

Part of the adventure of the ride is using the GooseChase app. Each team is added to the app and work together to complete missions to get points. The organizers did a great job selecting different easy to difficult things for us to record and gain points for along the ride.

Screenshots below show our team’s ranking and some of the missions we completed.

Meet  Joe Depczynski, Dennis McGrath, Kevin, Taylor and Hogan. The following is what I can remember that transpired from our ride together.

We received the GPX track of the ride about a week before it started. When signing up, you agree not to share the track itself, but you can see the general map of where we were going to go. 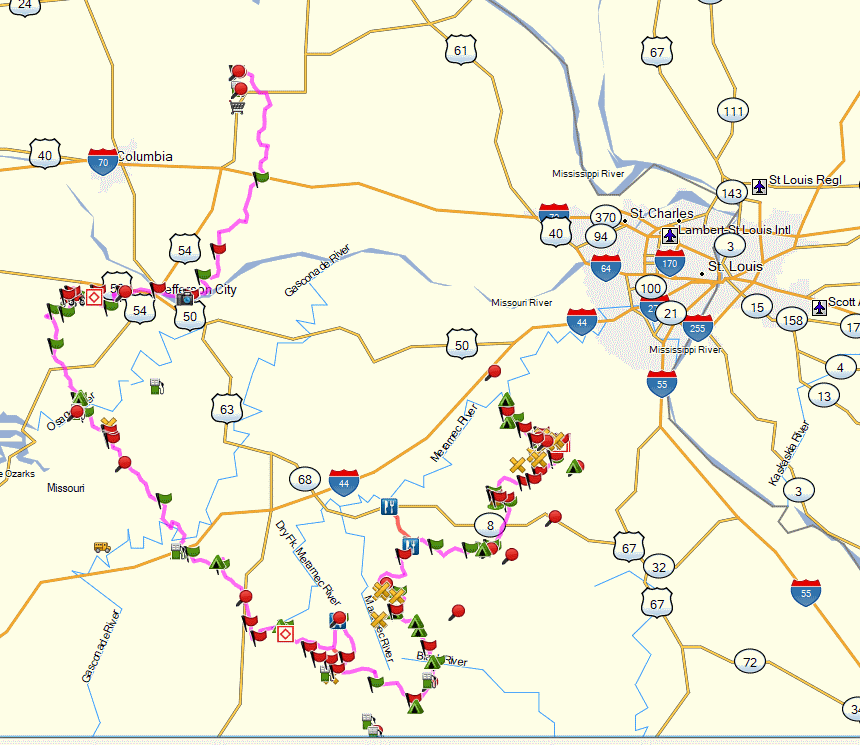 Thursday, I spent the day procrastinating about packing. I was nervous what to bring or not bring. Eventually I got the motorcycle packed and forgot about it, going to bed early.

Friday morning, I woke up at 3:30am and couldn’t sleep anymore. I got up and loafed around the house for a bit getting a shower before being dirty for a few days. I left the house as quietly as I could to make sure the family was able to continue sleeping. There, I went to the Quick Trip that we agreed to meet at and fueled up with gas and food. Our meeting time was scheduled for 5 am. This should give us enough time to ride to Little Indian Creek Conservation area, the official start of our 2 day ride!

When 5am hit, Joe and Dennis has not yet arrived. I began to worry they would never show and started deciding when I would just leave and meet Kevin on my own. At 5:05 am, Joe showed up and I was relieved. Still concerned, Dennis showed up at 5:10am. We were a full group. I was confident in my directions and technology and headed out to the starting point to meet Kevin.

The highway riding was bitter cold in the morning and my heated grips were turned up to keep my warn. Just as we were

getting off the highway at my exit, my navigation phone (I have 1 just for navigating and my regular one) died. I was flummoxed as it was plugged in the whole ride. Turns out that I substituted the plug during packing. The one I was using didn’t fit as well and came out enough to not charge.

We pulled over to get our directions manually as my phone was now at zero battery. With directions memorized, Dennis lead the way to Little Indian Creek Conservation area. There, Kevin was waiting for us at the entrance to go ride! But before we could take off, we needed to take a selfie of the group for the Goosechase app. One of our many tasks for this trip to document what we’ve done.

It wasn’t long before we were going down the road. Then the sign to turn around, we had missed our turn. This is where things started getting interesting. I had the first fall of the team on a state highway U-Turn. I felt stupid, but it was nice to get it out of the way! 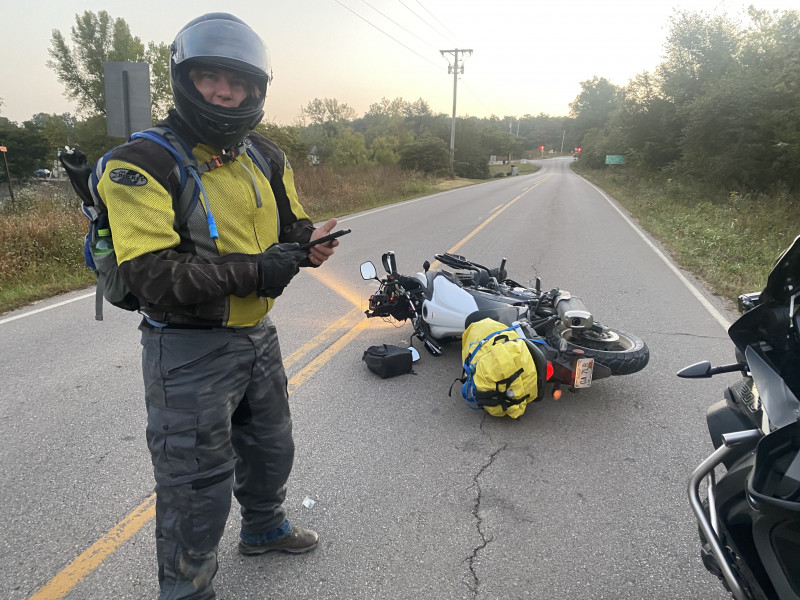 I’m happy to report that there was only a very minor amount of damage to the bike. One strap broke and a highway bar (place to put your feet forward) bent. Nothing significant, just my pride!

Shortly after the U-Turn, we were climbing up on fire trucks to get a photo for the app! 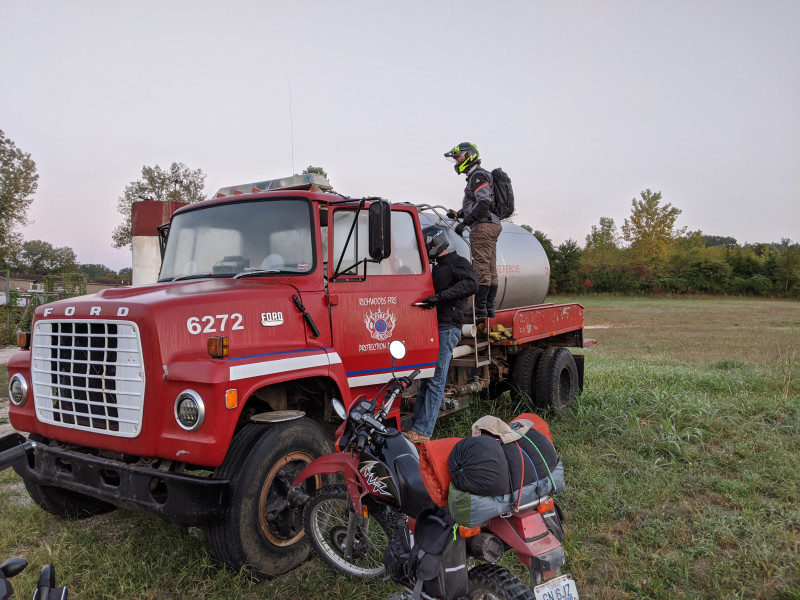 And now just photos with some descriptions from the adventure!

This is inside Romp MX park, Joe and Kevin did some off road riding to get to a GPS point deep in the single track and get us some team points. 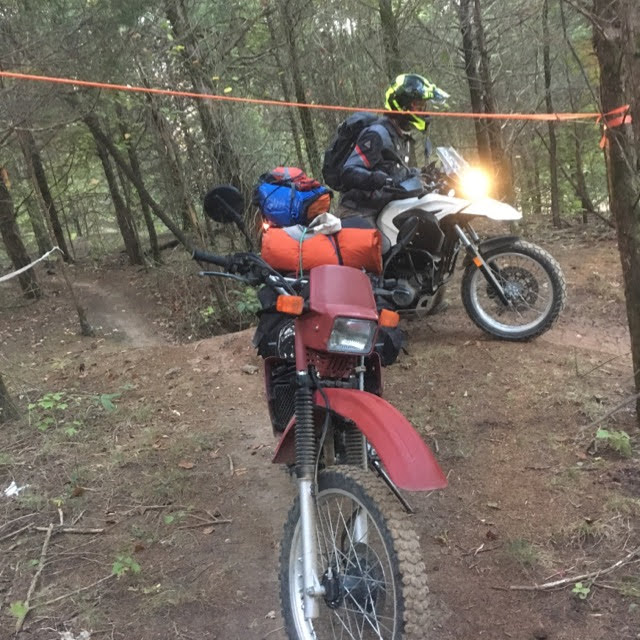 Joe had our group’s first repair. He bought the bike he is riding 2 days before the ride and had a small oil leak. He was confident that something wasn’t on tight from when he did the oil change. 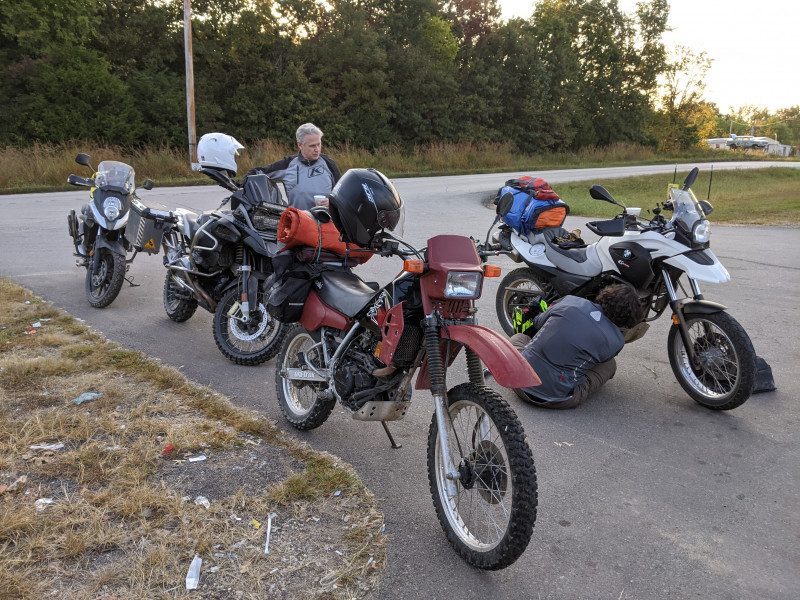 We need a creative photo at these “water cannons”. Kevin and I decided to be human water cannons. 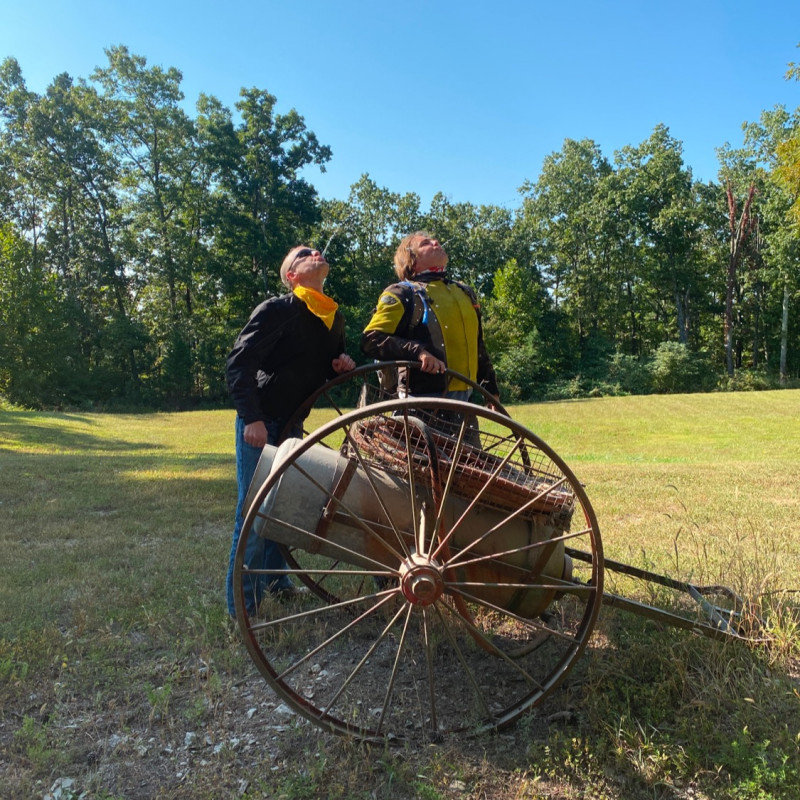 This photo was our second major challenge. Earlier in the day, Joe tried to ride up a very steep hill and fell over several times. Dennis and I were thinking it was a bad idea for us to even try. We turned Joe around and took a detour while Kevin rode the real tough stuff. We were a bit on edge when this feature came up. It doesn’t look like much, but its a very steep downhill followed by an uphill of the same size. Kevin went up and down while Joe, Dennis, and I decided on a detour. 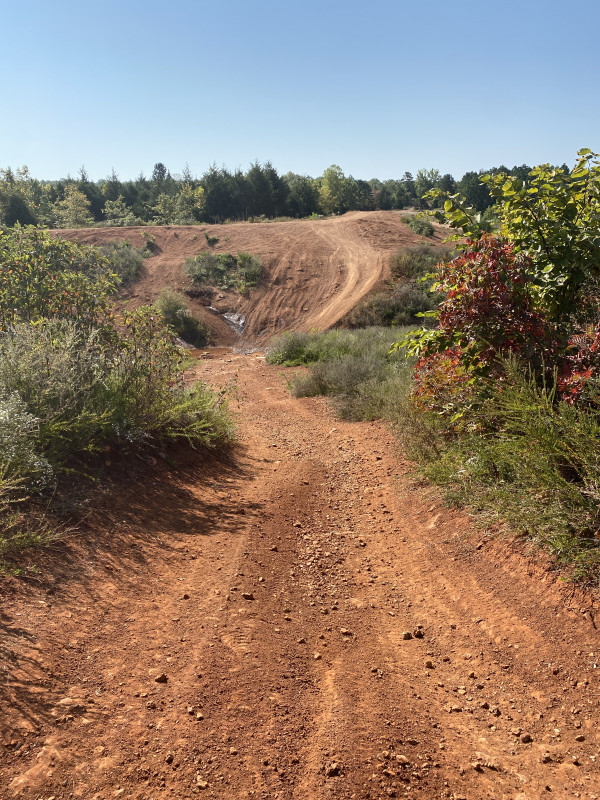 It turns out that our detour took about an hour to complete. I believe it was harder than the photo above that we avoided. It was a very steep hill with large loose rocks. Somehow, Joe went up by himself. Then Dennis went up. He fell over around 8 times. Joe and I coached and pulled him as much as we could. Half way up, Dennis needed a break and we decided I should go to give him a breather. I didn’t fall over, but I spun my rear tire a ton and barely made it up with their help!  I noticed afterwards that a rock got embedded into my new tire. It didn’t cause me any issues. It did however make me grateful that I got new tires before the trip. 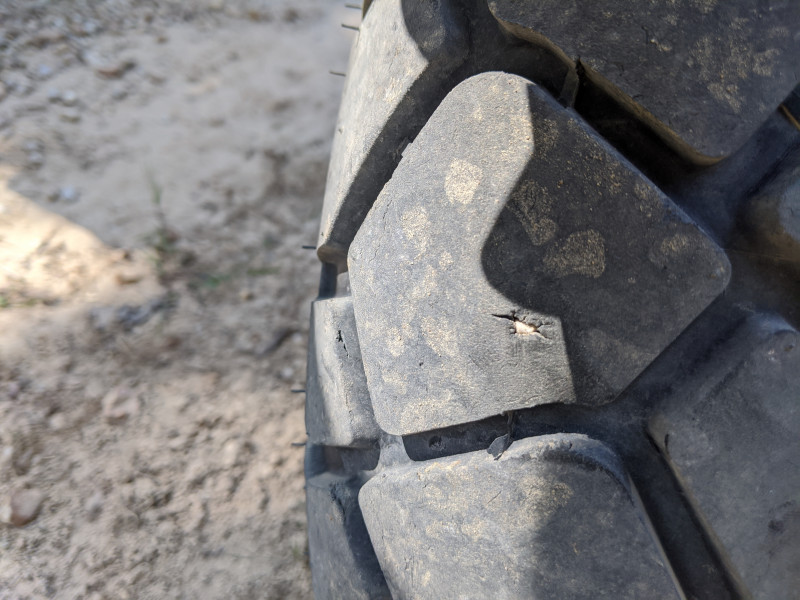 Not all of the ride was difficult, we did have fun at other roadside attractions like this bulldozer. 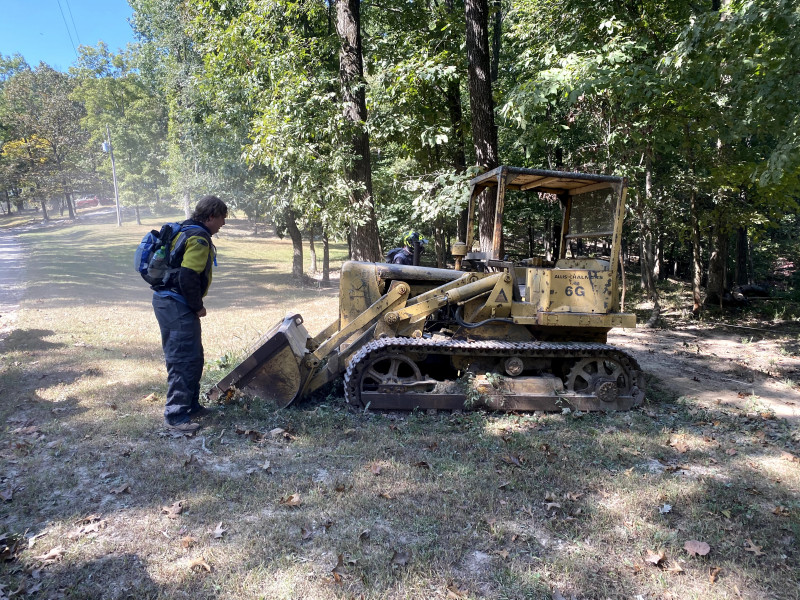 Time wise, we should not have stopped for lunch, but we were exhausted and it felt great. Of course, it was a crowd of motorcycles! 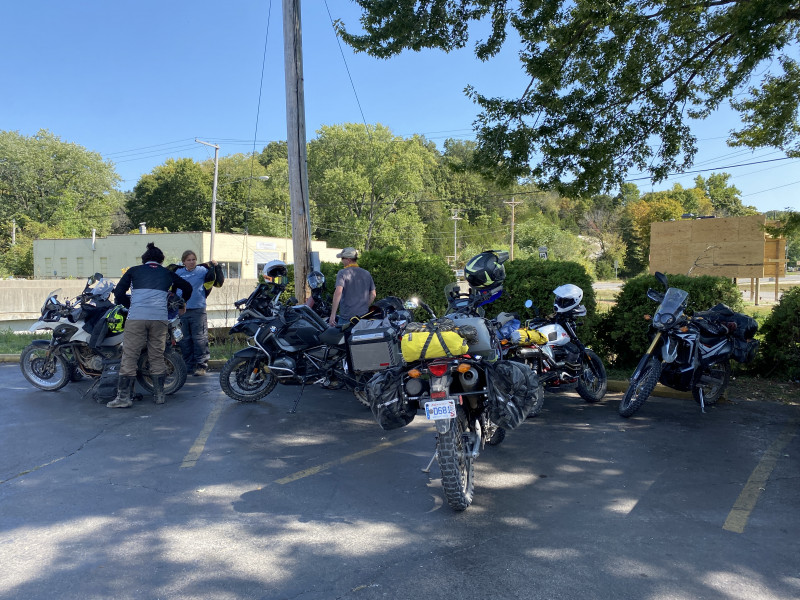 Somewhere along the afternoon, we had to find a cabin in the woods. Our track took us off the gravel road and on to a non-mowed power line road. I followed Kevin and had trouble staying upright as there were narrow tracks and elevation changes. Once we got there, I walked back a ways and saw Joe had fallen. When I got to him, he said that he took a pretty good fall. It took a while to get him going again.

By the time we found camp, it was full dark around 8pm. I learned that my two flashlights barely worked. I had to shake one and the other one was borderline possessed. A headlamp for next time. We put up camp by motorcycle headlight. And then were up and packed, rolling out of camp at 6:10am on Saturday.

We went first to a gas station where we learned that Joe had enough. Between all of his falls on Friday he was thinking he broke a rib. He wanted to get home and rest as it was getting much harder to ride. Our team now carried on as three riders.

While I thought Friday was hard, Saturday had some surprises up its sleeve for us. First up was a slimy bridge. Kevin tried to warn us, but Dennis went down.He was fortunate as his bike did a 180 spin and was inches from falling into deep water. I clenched my cheeks and went across slow and straight without incident. The photo was after we pulled him and the bike to safety. 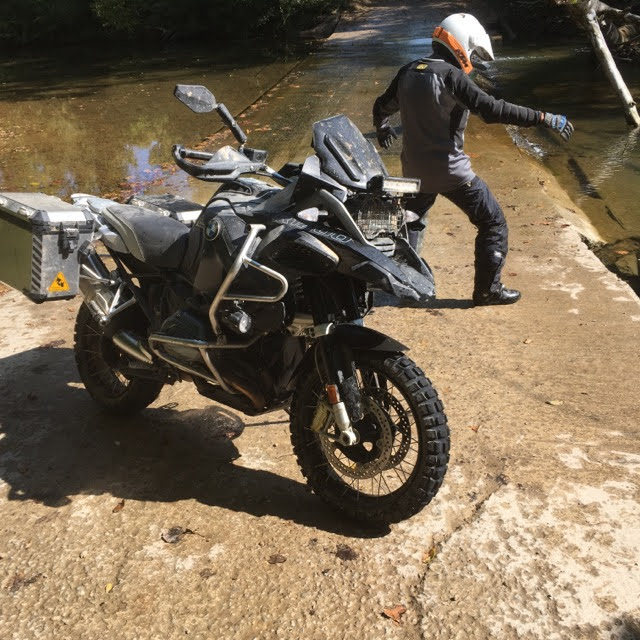 Another semi-offroad geocache had us in this field with hay bails.Rather than go back out the way we came in, we went up and popped out on the highway making our own path. Of course, Kevin scouted it out first 🙂 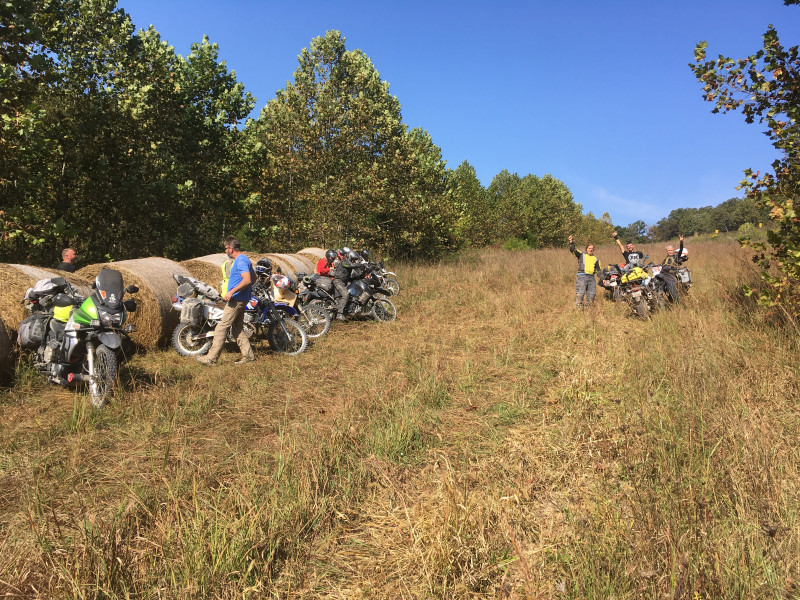 I’ve seen this bridge in several Missouri riding videos. Its at “Devil’s Elbow”. It was fantastic coming up to it and riding under it after seeing it online many times. The guys said its still in daily use servicing Fort Lenoard Wood. 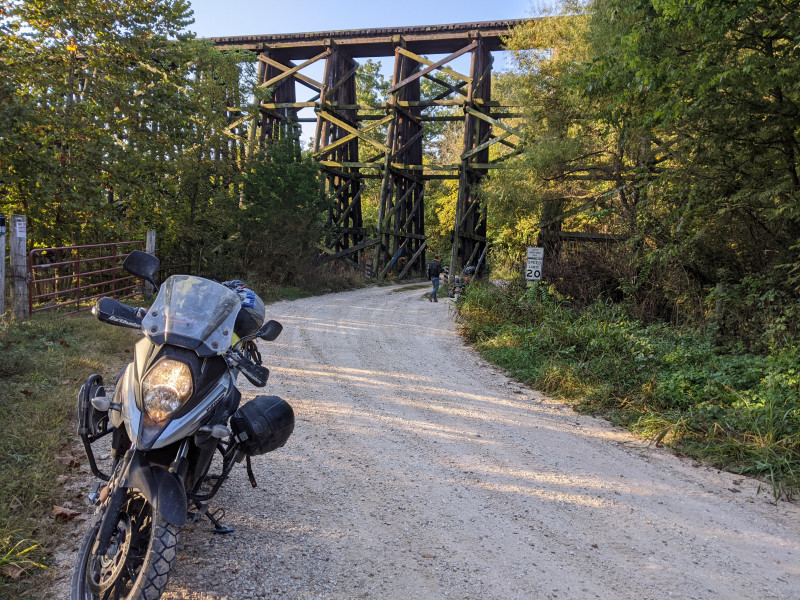 Shortly after the train bridge is this one going over a river. 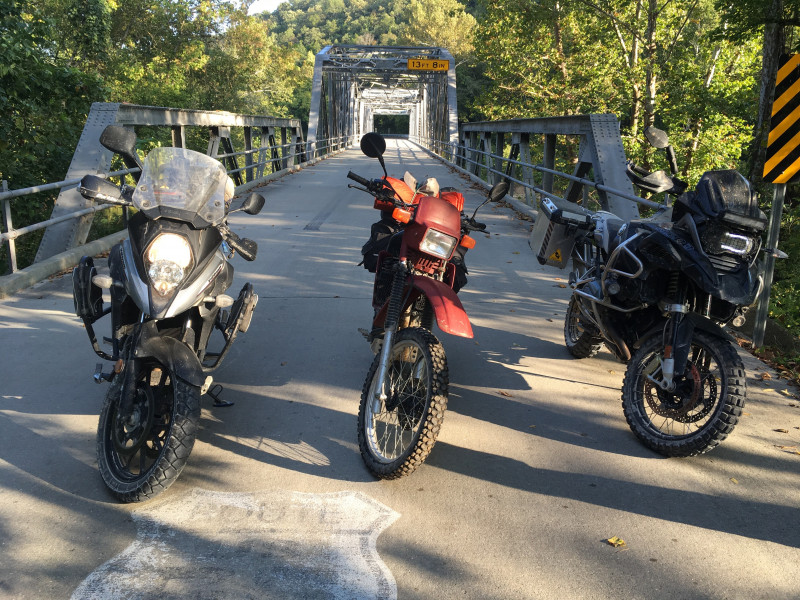 A random selfie I took at lunch. 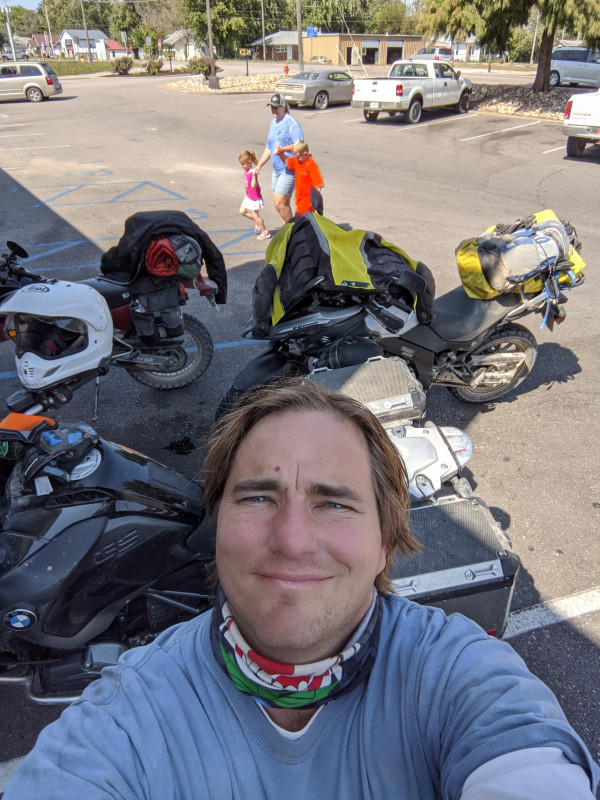 No day of riding would be complete without its events that seem impossible, all coming after lunch.

First, just north of Jefferson City, I learned what deep sand can do to a motorcycle. It felt like 10 minutes before Kevin and Dennis came back to see what happened to me! I was going about 25mph when I lost control and crashed. The bike and I survived without incident, but I have a new respect for riding in sand! 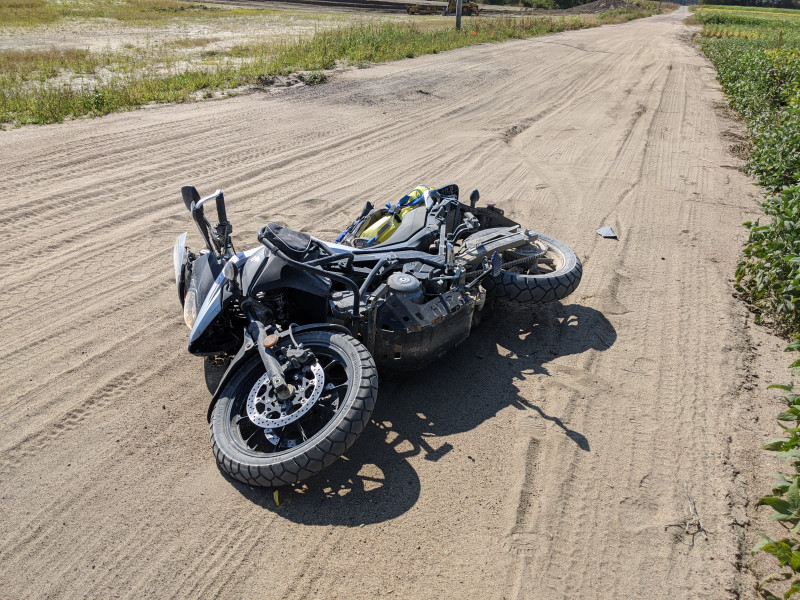 After the sand pit came the closed bridge. Because why wouldn’t you cross a bridge missing some of its most important parts. Dennis decided to pass and let Kevin navigate his bike across the bridge. I”m happy to report that I made it without incident. 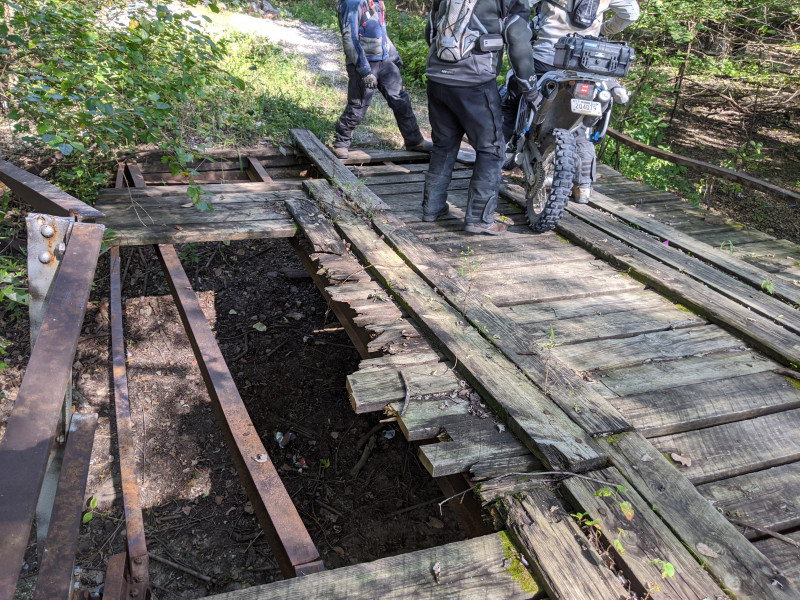 Finally we had a deep water crossing. It was around knee deep and deeper in sections. Like always, Kevin went across without issue. Dennis hit a rock and knocked his bike over (its in the video). It started right back up and finished the crossing. Then I went very slow to not have the same falling fate and it worked other than being extremely wet when I finished. 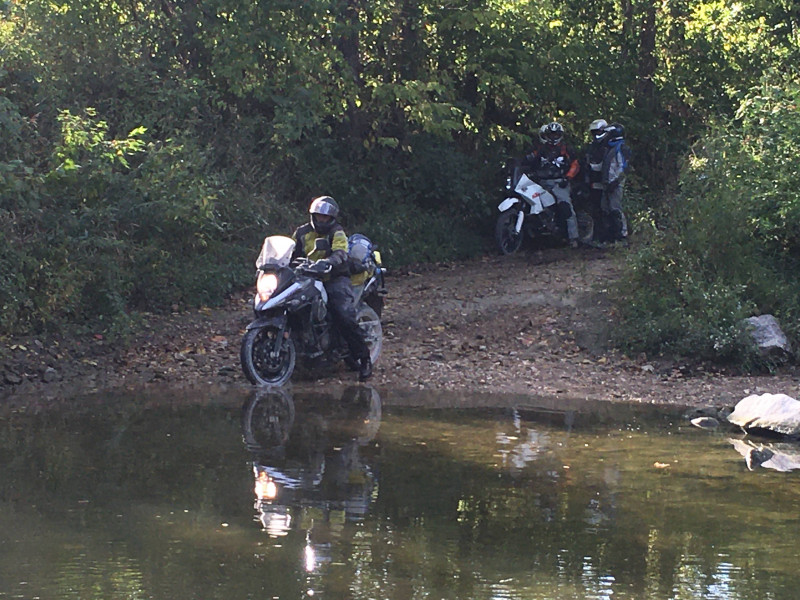 I learned that the universe has an unlimited supply of gravel dust for me to eat in the back of our convoy! But I’m looking forward to doing this event again next year!!!

Finally a few from the Adventure Palooza headquarters. 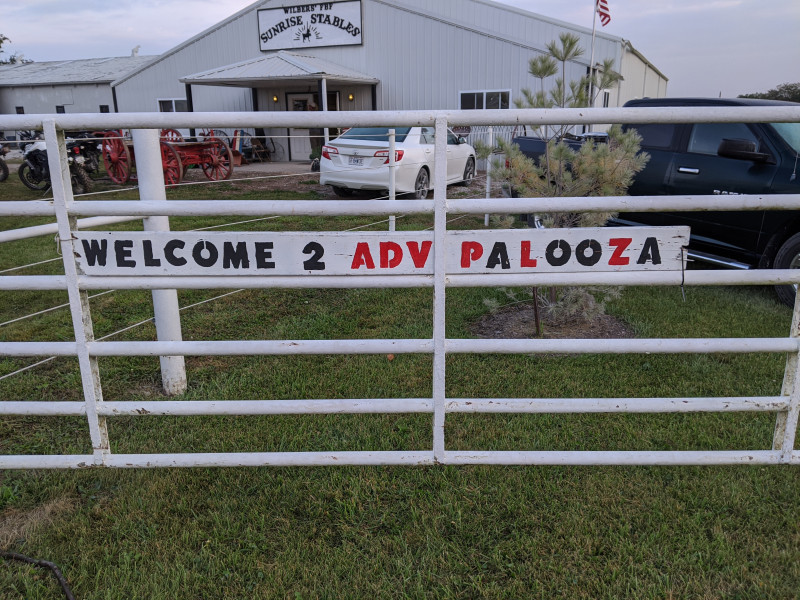 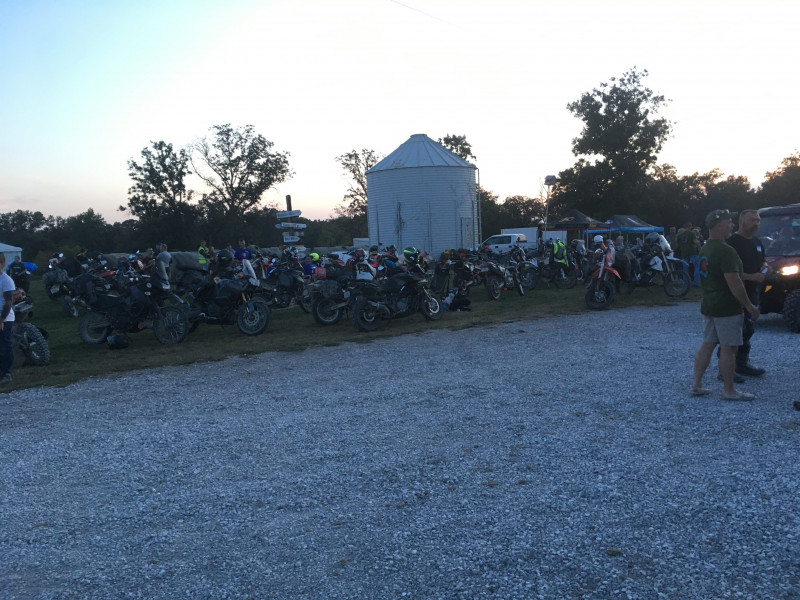 All told, when I pulled into my driveway on Sunday, I had traveled 664 miles for this journey.