Corvin’s grade school takes all 5th graders on a field trip to Hidden Valley Ski Resort each year. Corvin was looking forward to this trip. I took the day off work to go with him figuring we would have some valuable father-son bonding time. I was not disappointed.

They started off the day at school, taking a bus to the ski resort. I decided to get some stuff done around the house and meet them out there. When the appointed time came, I drove out and found the kids gathered getting lessons. I decided to join the party and purchased a lift ticket and ski rental for myself. Fully dressed for skiing, I went out and found Corvin getting a lesson. 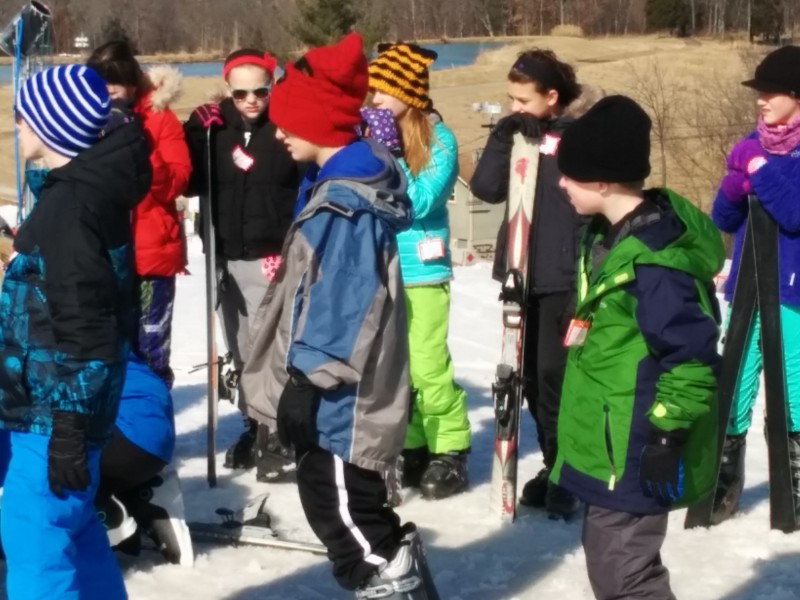 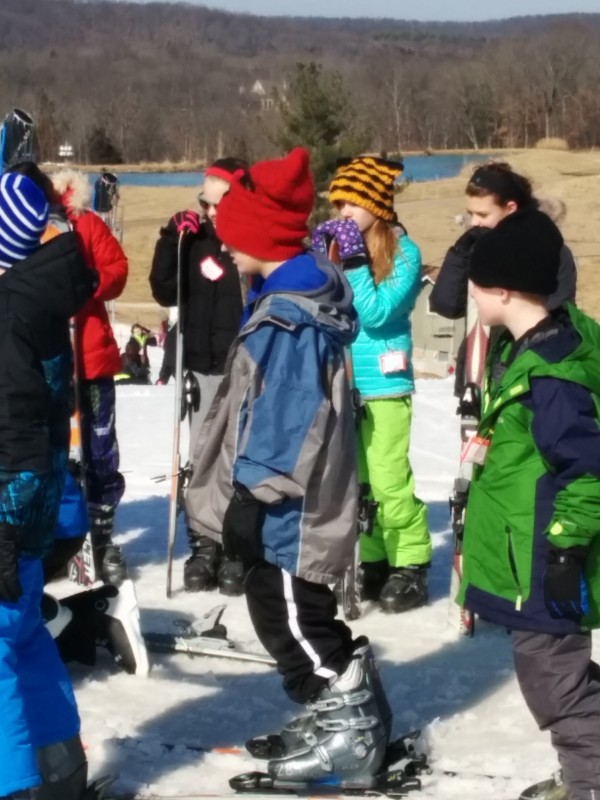 One of the Hidden Valley employees saw me with the stupid look on my face holding ski equipment and gave me some pointers. Nervously, I tried out the super bunny slope with the kids. 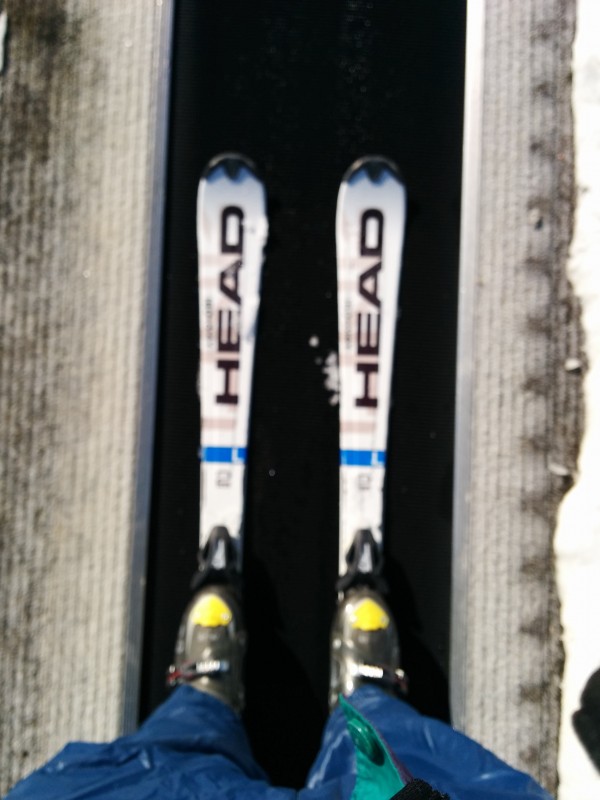 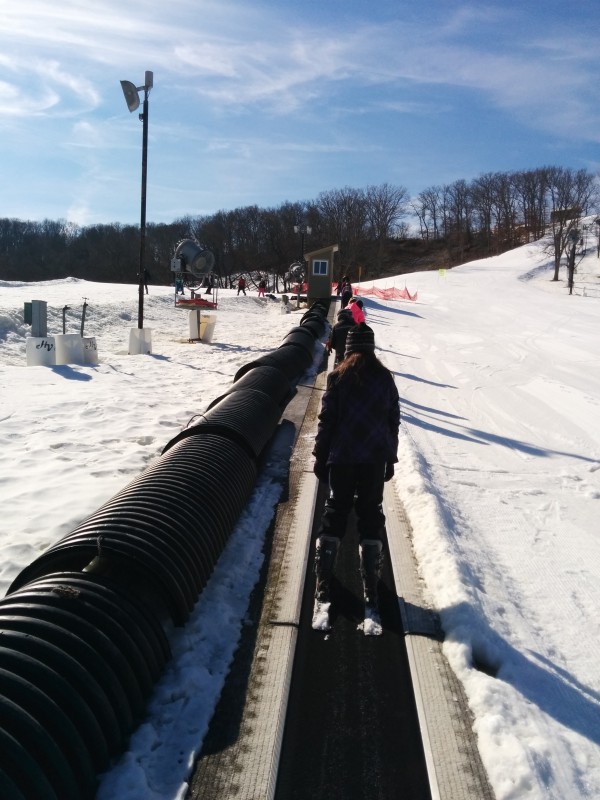 At the top, I listened to the instructions and watched before trying it myself. I quickly gained confidence enough to not worry about falling just standing in place. I was then asked to shuffle kids inside for lunch. I found Corvin and he was ready to stay all day, so we went and got extended lift tickets. Several  other dads were doing this at the same time, but they had the confidence of being skiers.

Corvin and I headed back out where he took a few more lessons before we decided to go ahead and ski on to the bunny hill of our own accord. He fell a few more times, but it never seemed to stop him! He got the hang of it and went back and forth on the simple hills.

I like to think I’m not afraid of heights, but once I was on the short lift with Corvin, my heart started racing as we got farther from the ground. I was worried about Corvin falling, catching a ski on the large support poles and falling to the ground myself. Worried that when I got to the top, I would not be able to get off the lift, or fall and cause a mess. I started wondering why anybody liked skiing!

I decided to get brave and told Corvin I  would scout out the large lift and see what I thought. When I got to the top, my fear started setting in. I went down the hill a bit before I fell pretty good. One of the other dads came over and gave me some pointers. He was kind enough to follow me down the hill coaching me the whole way. I needed to do a turning pattern down the hill to slow me down. I fell once more, but his encouragement was just what I needed.

When I met up with Corvin, I said it was too much for him  and that we should just focus on the small hills. He was okay with my assessment as his friends were also sticking with the smaller hills. Then it hit, his friends and their dad all wanted to go up the monster lift and down the big hill. I tried to talk Corvin out of it, reminding him that there is only 1 way down from the big hill!

With great reluctance, I went up the lift with the group. At the top, Corvin could hardly keep his balance with his excitement! 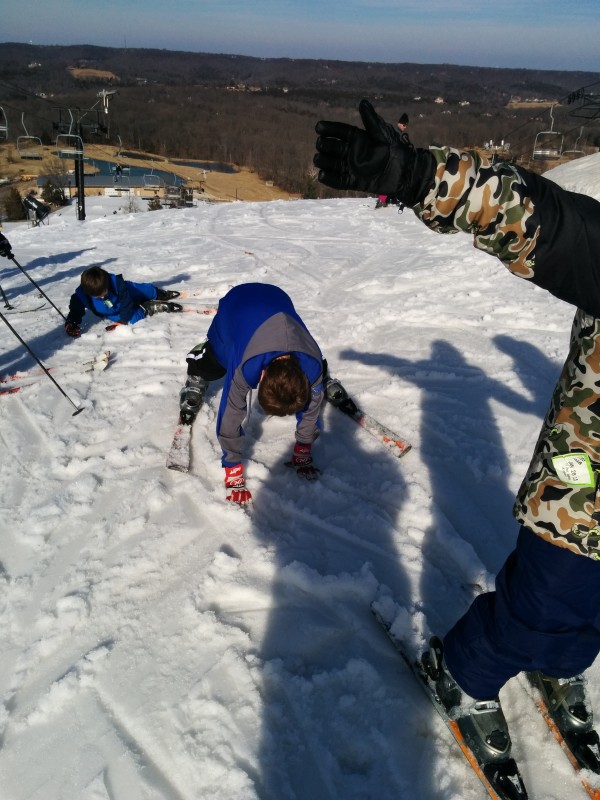 I asked him to wait so I could go down with him, and turned to take a photo of the dad and his twin boys. Before I realized it, Corvin was half way down the hill and had crashed. I worriedly watched him get up and go straight down the hill again. Next the twins took off. Their dad followed and I watched a spectacular crash by him and I laughed to myself. I knew the secret to going down the hill. I could finally wait no longer as there was nobody else up the hill with me.

My laughter at the dad crashing quickly disappeared as I had to now go down the hill myself. I just had to remember what I was taught. I went down and turned left slowing down greatly. Then as I got to the left side, I tried to turn right and nothing worked, so I fell. Once I gathered myself, I started out again right and then made the turn to go left, slowing down under control. But when I got to the left side, I couldn’t turn right.So I started going out of control downhill. At some point, I lost my favorite hat on the hill.I’m now cursing to myself dragging my ski poles and attempting to plow my skis, but it doesn’t seem to be slowing me down. Shortly before my fall, I emitted a loud expletive or two alerting the people on the lift to my impending doom and then fell.

I hit my head very hard on the snow and was surprised that I didn’t get knocked silly. When I got up, I had to walk quite a ways to get my skis and poles up the hill. I was willing to walk almost back to the top of the hill for my hat, but somebody found it and expertly skied it down to me. At this point, I’m basically done skiing and walk the rest of the way down the hill so I don’t fall again.

Eventually I found Corvin. He had a blast and continued going down the large hill by himself. I played around the bunny hills as it was all I could handle. Corvin would check on me between his full speed downhill runs. The other dad that I laughed at from the top made it down safe, but later dislocated his shoulder and broke his collar bone on a different fall!

It does look nice at night! 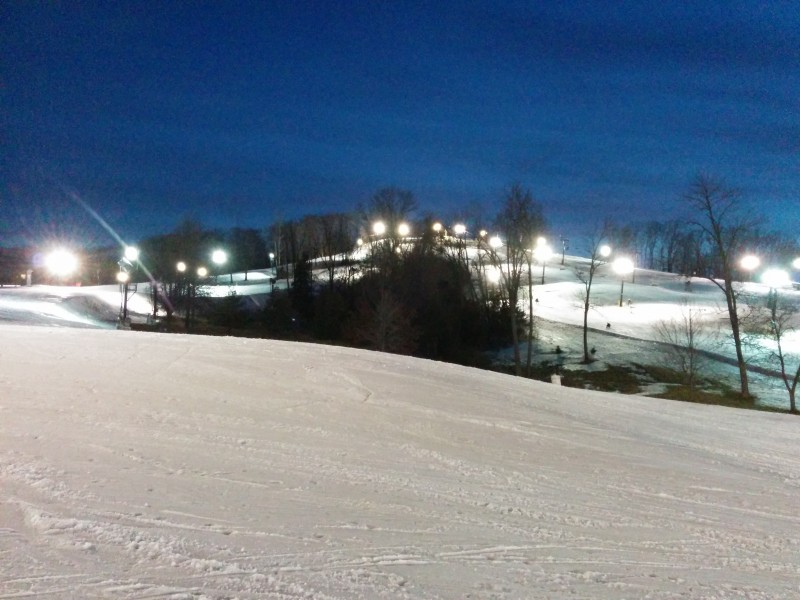 To end this day right with Corvin, I told him we could go anywhere for dinner. He jokingly said Steak ‘N Shake. I hate that place for their generally poor service and shoestring fries that get cold and gross about 2 seconds after they are served. But anything for Corvin, so we got dinner there with above average service this time! 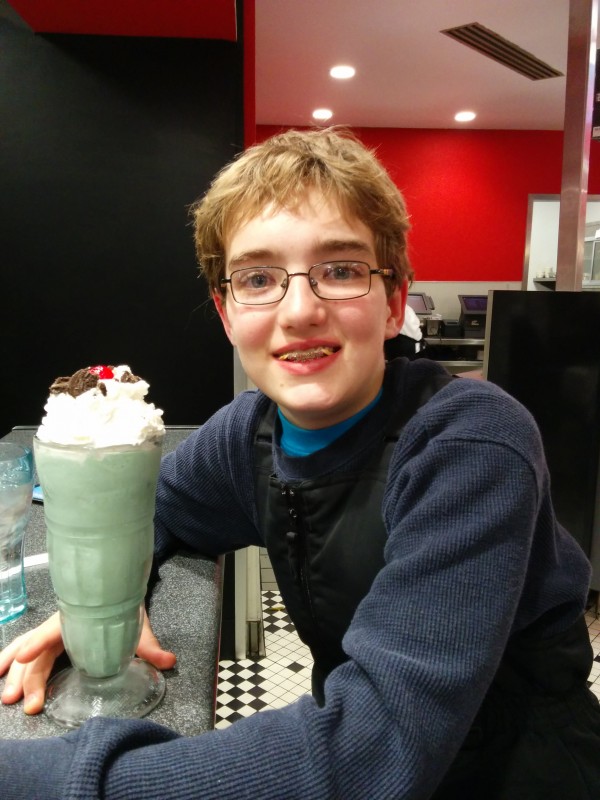