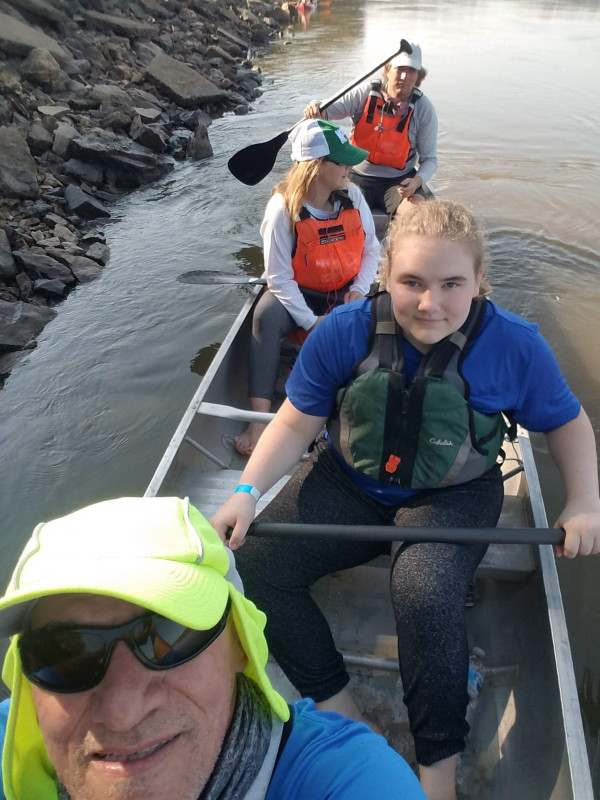 Race To The Dome is a paddle race on the Missouri river and a fundraiser for Missouri River Relief. There is a long and short version of the race. This year was my second time participating and paddling the short 16 mile course. I was on a team with Sonora, Melissa, and Bernie in the Beast. If you’re not familiar, The Beast is a 19 foot long 40 inch wide Grumman aluminum canoe that comfortable sits 4 people. Its worth noting that this is not a race boat. Its a fun boat that I use to race and occasionally do well in. I used this boat in the MR340 earlier this year and had a pretty decent finish.

Sonora and I drove out Saturday morning, leaving the house with the trailer and boat around 4:50am. Sonora did a great job sleeping while I drove. It was a nice easy (but cold) drive out. It didn’t take long before we arrived at Wilson’s Serenity Point and picked up Bernie. There, we drove out to Hartsburg access where the race would start.

Its amusing to note that my trailer hitch doesn’t have a tight fit with the receiver. This meant as I drove into Hartsburg access, everybody looked to see who was making such a racket. Once unloaded, it still commanded nearly everybody’s attention until I parked. Now came the waiting game. We wanted the race to start, but fog was going to delay us!

Looking down the ramp at the fog. Couldn’t see across the river. 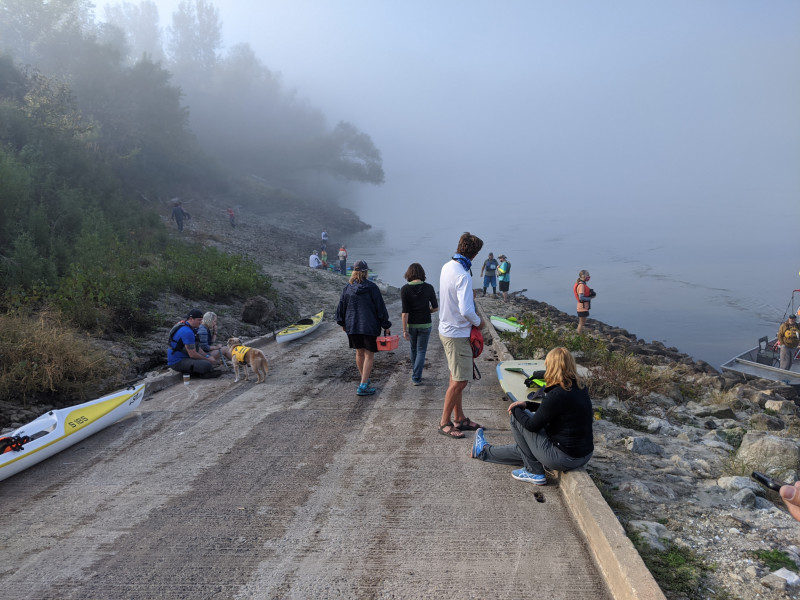 Sonora being silly before the start. 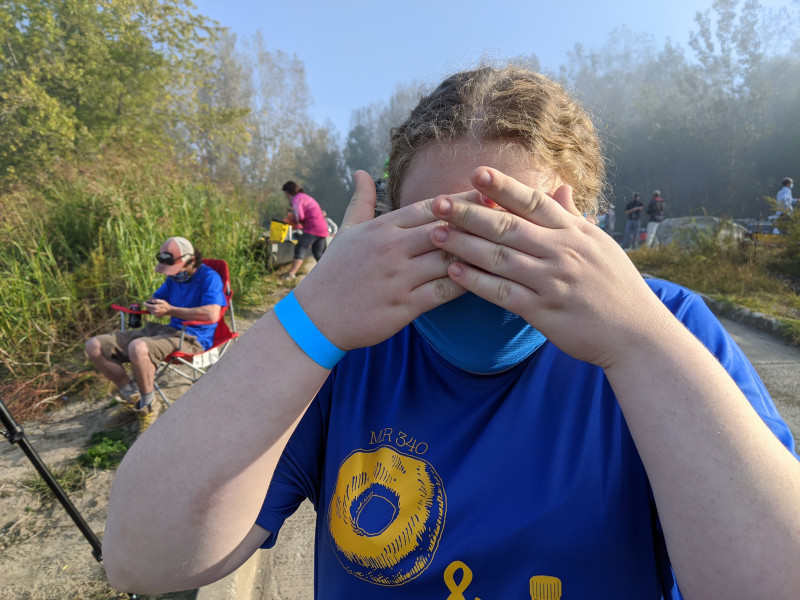 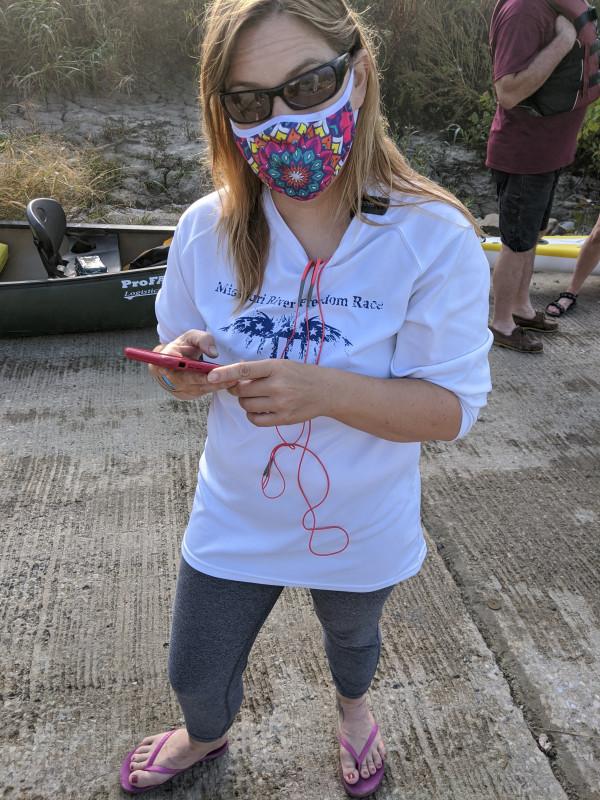 Missouri River Relief got a new fancy video setup. They were live streaming the event! 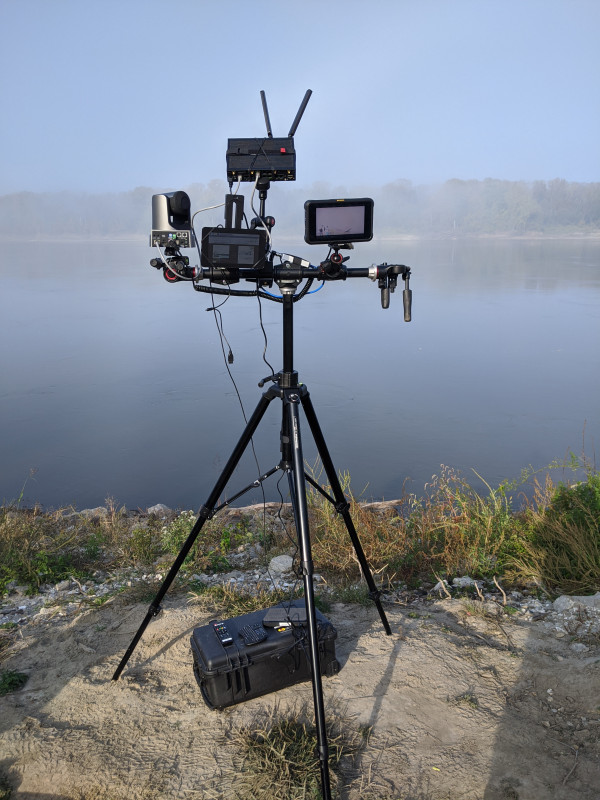 When the fog finally cleared off, we were quite excited to watch the solo paddlers get on the river and head off. Then we were able to get in our boat and stage for the start of the race. Bernie managed to get this team selfie just before the start.

While we were still hanging on to shore pointing upstream, the race suddenly started. We expected more warning, but they just declared the race started. Well, we were off!!! We quickly turned the boat downstream and went to it. The race was a long hard fought affair. We went from nearly last to third place within the first 2 miles of the race. There we fought as best we could and worked our way into second place after about 10 miles of the race. There we toiled to catch Di McHenry and her grandson. Every time we nearly caught her, she would hear us and surge ahead. Much to our demise, within the last 1/2 mile of the race, the boat behind us passed us putting us in third of our flight. I can’t complain as we’re not in a race boat and we did our best. More importantly, we all had a blast!

Here is the boat at the finish line after a great race! 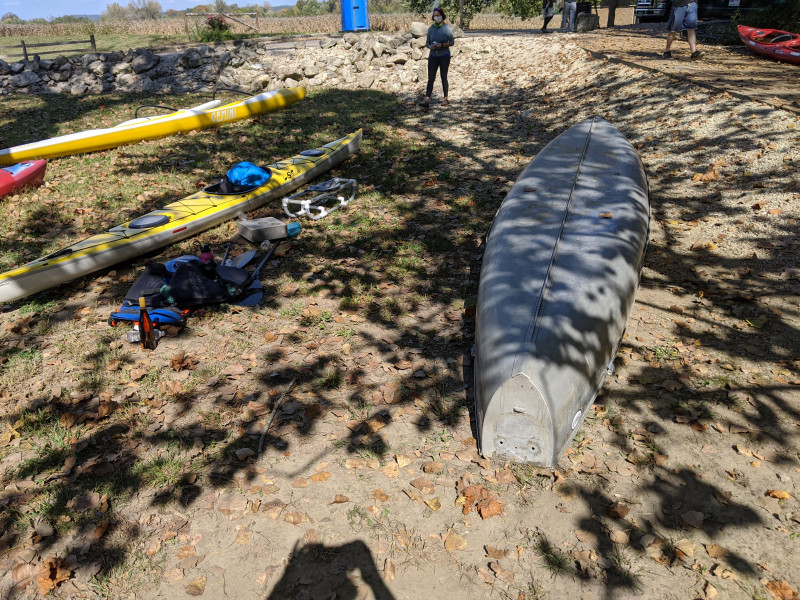 About an hour after we finished the race, we had eaten and were ready to call it a day. Bernie loaded the boat on his truck and drove us back to Hartsburg. There we transferred the boat to the trailer and parted ways. Rather than head straight home, Sonora and I went the long way. We headed north to Columbia, Mo to visit Hannah and her friend Dianna. We stayed till dark enjoying a fantastic dinner and looking over Diana’s 1 acre garden. Also, we were able to hand deliver Hannah’s new fish tank. This was a fantastic weekend that Sonora and I would love to repeat in the future!