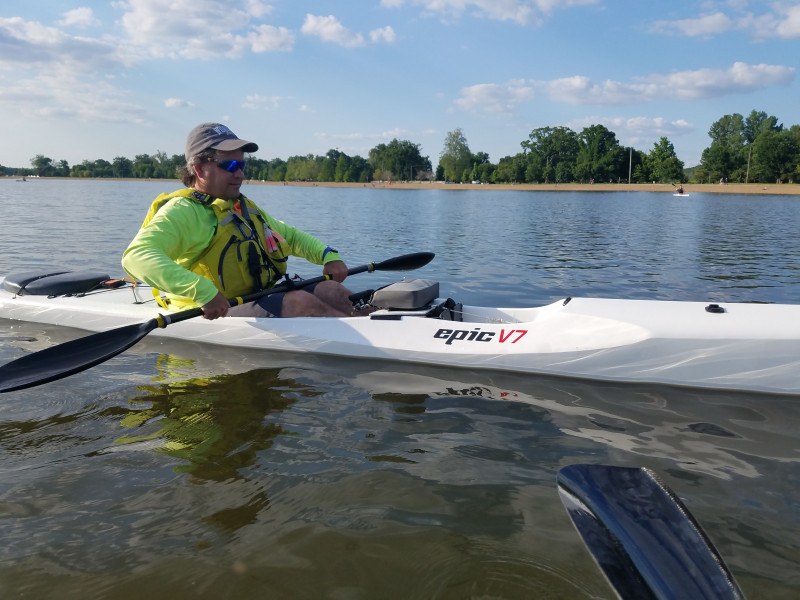 I purchased an Epic V7 surfski. I’ve been wanting to paddle a fast boat for a long time. My race times are getting faster, but the next big step is a faster boat. I found one online and made an offer. Eventually, my offer was accepted and I drove 4 hours round trip to pick up the boat. Today is the first day I’m able to race the boat.

In the summer a group that connects on Facebook, Creve Coeur Lake Show Me Oars 5k meets and paddles a timed 5k race around the lake. I met up with the group and started racing them on Tuesdays with today being my first day. I’m a bit shaky in the V7 as its a narrow boat and I’m used to it. The photos below are of Jeff, who also has a V7. I’m thinking about outfitting options based on what he has already done.

Jeff getting ready to race against me.

There isn’t much storage on a V7. Jeff’s solution is this YETI dry box and a GPS just under his feet. Note that its tethered to the boat. I’m not quite ready to put something over my feet, but it is a good idea.

For my first 5K in the V7, I paddled 33:06. I was happy with that time.  However, at the end of the race at my last paddle stroke, I fell out of the boat in the water to the right side. I just couldn’t keep from falling out with most people watching! I laughed it off. However, my cell phone had enough. It was the last day that the cell phone worked! So an expensive but fun day!