The second Thursday of the month, you’re going to find me on a river paddling. Generally the Meramec river. Tonight was no exception and I was bring a new paddler with me. I met Tonya at a doctor’s appointment. She was working and I struck up a conversation with her. Somehow, it came to paddling. It sounded like she had not had the opportunity to go in a long time and I invited her for the July sunset race. I think she gave up on me, because she was quite surprised when I called her about a week before to make sure she was still coming.

It took some serious encouragement, but I got her to come out to the river. She ended up bring her son (I think his name is Sam). The three of us piled in the canoe and took off for an adventure! 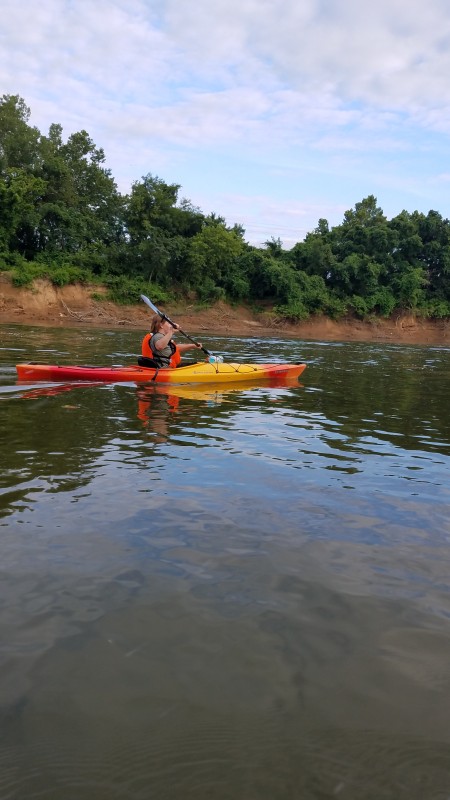 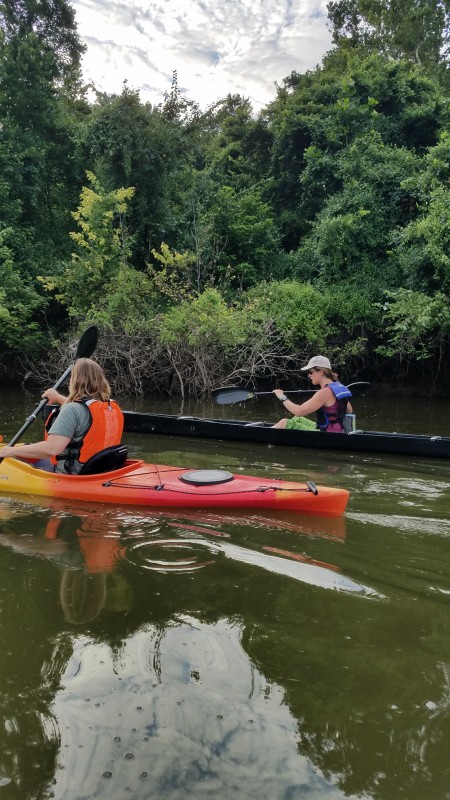 Sam and Tonya. Look closely and you can see the deer on the bank we’re pointed at. 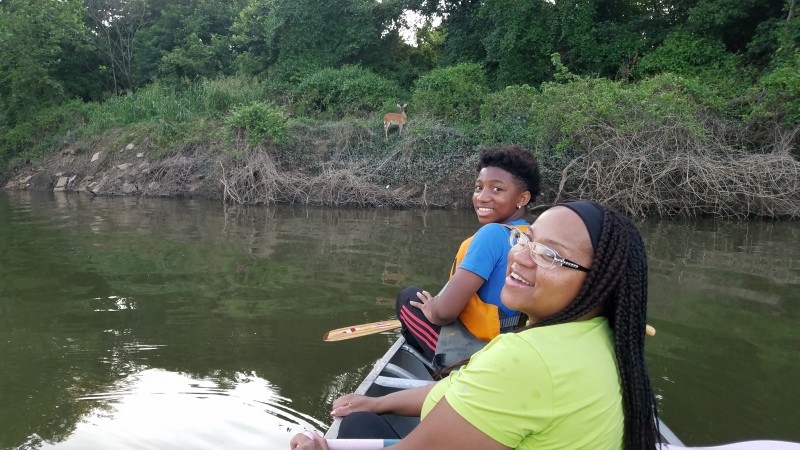 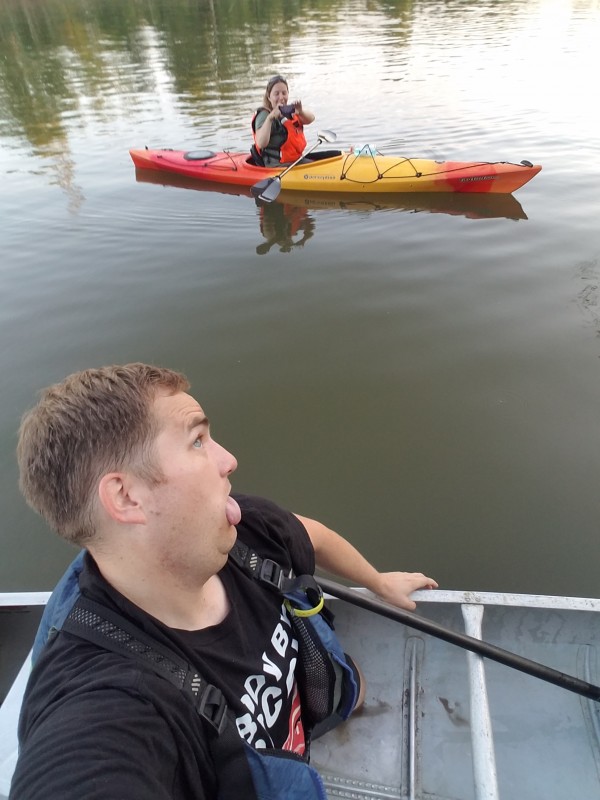 Which is why she returned the favor! 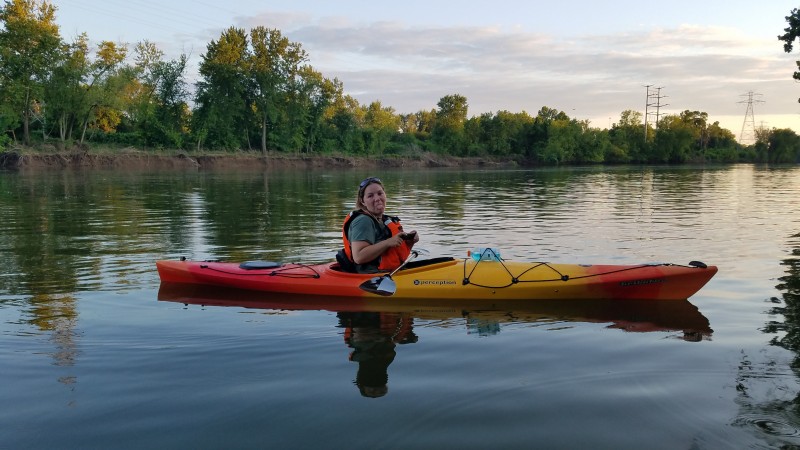 There are the three of us enjoying a perfect evening together. 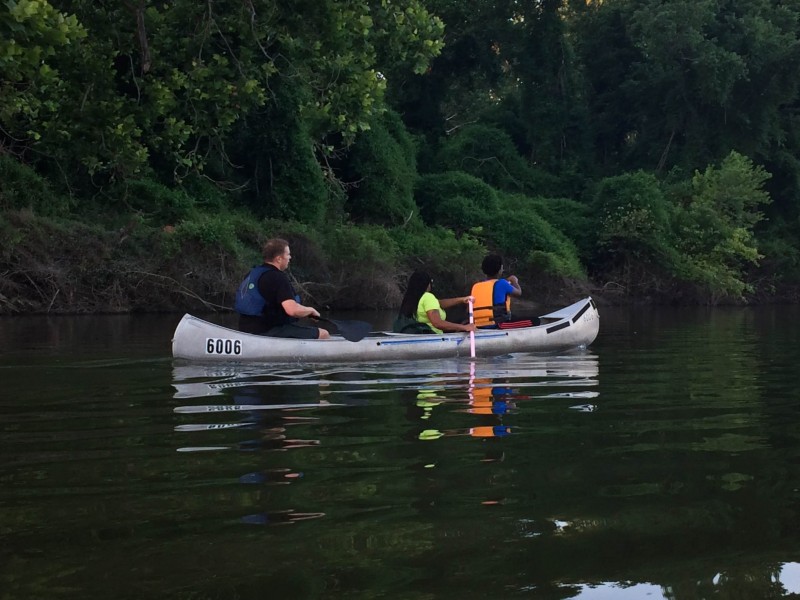 Tonya didn’t bring any shoes that could get wet. We were helping her stay dry as she got in the boat. 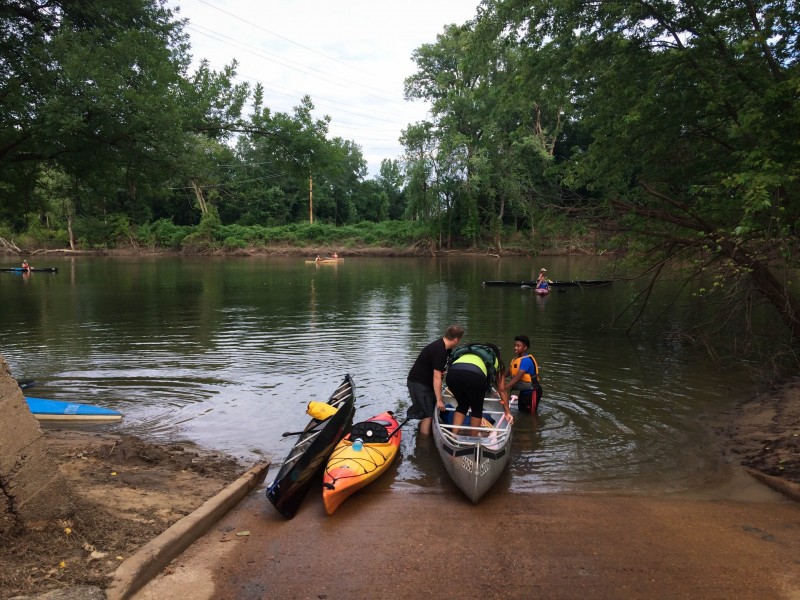 It brings me joy to spread my paddling opportunity with others! 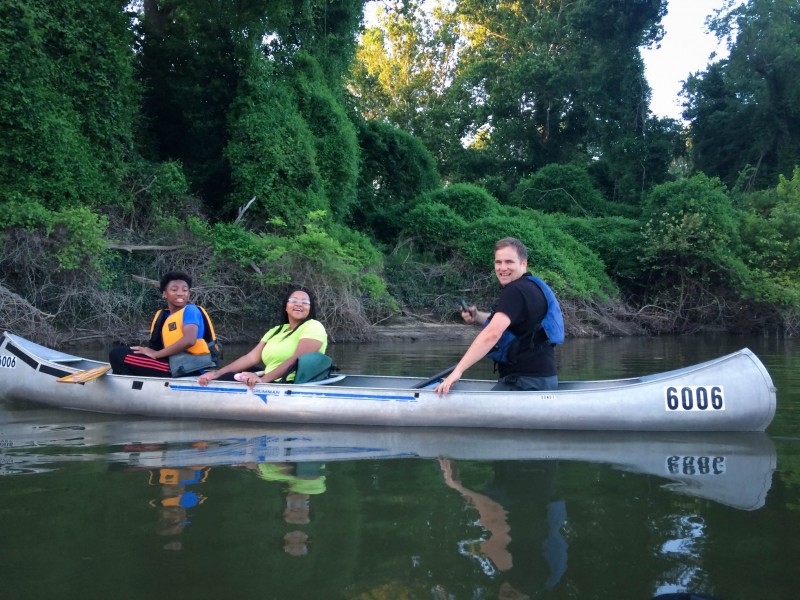 If you’re reading this and you want to go out paddling, drop me a comment and we’ll see about working something out!

If you’re curious about our event, its always the second Thursday of each month. Events are announced about 1 week in advance posted at the following 2 locations.

I wonder how many more times I can say that the Sunset Race provided me with new entertainment. It seems like every time I go out to the river, a new experience awaits me. I started this one my favorite way. I went out about 90 minutes before the start and got in a unicycle ride. 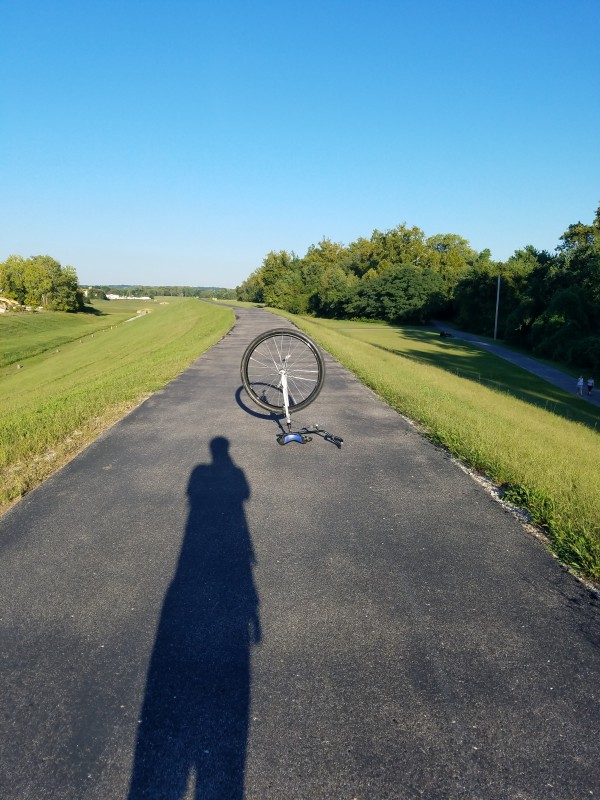 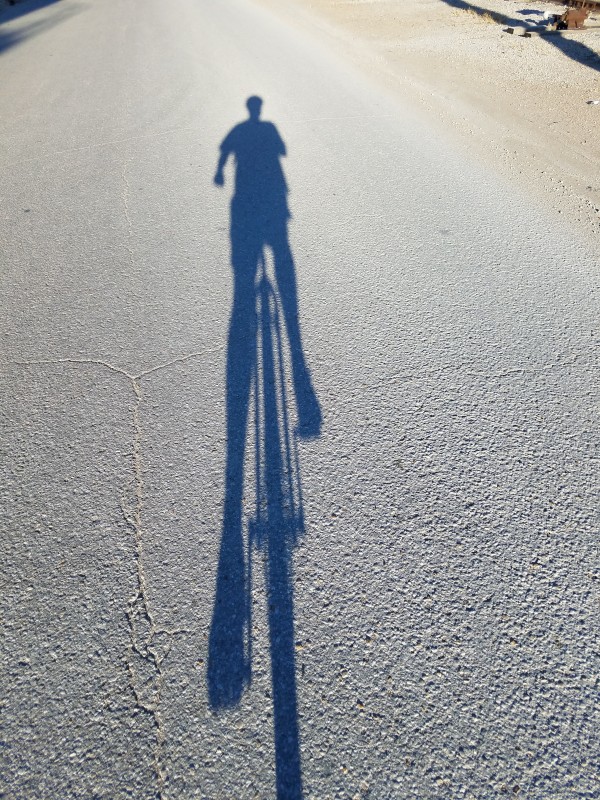 When I got back from the unicycle ride a few paddlers had already shown up and more were arriving as we were getting close to starting. I had yet to put my boat in the water, but others has. That is when we noticed a hot air balloon coming our way very low. It eventually landed in a field about a 1/2 mile from the ramp!

Here is the view from the ramp. 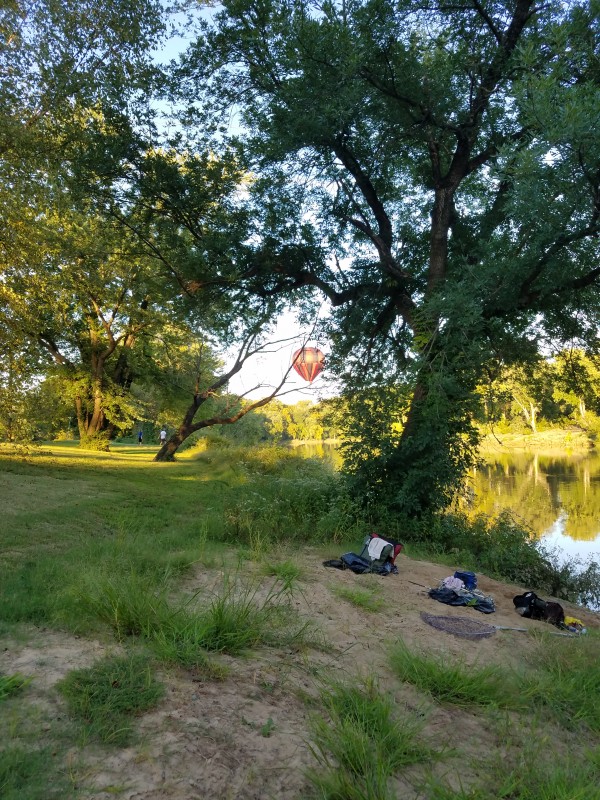 Here is the view from the water. 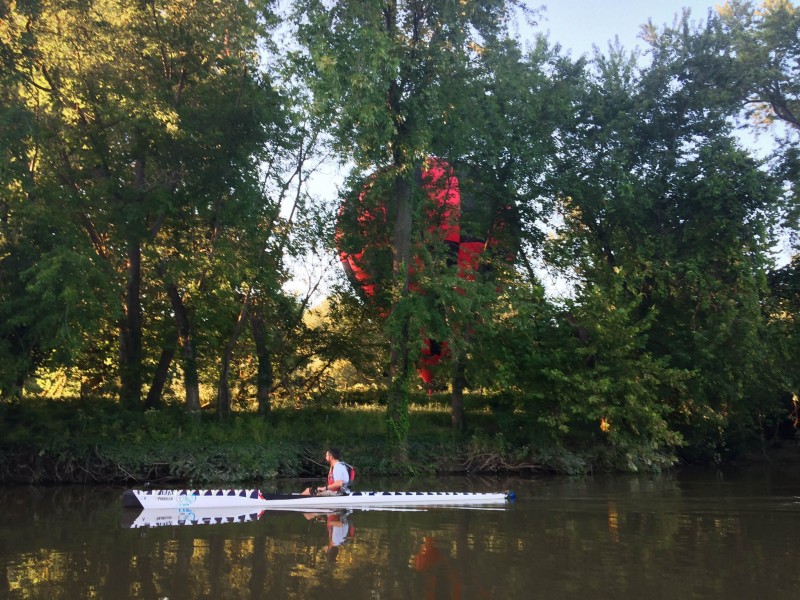 And in case you were wondering, we do paddle during the sunset!

A view from after we finished. 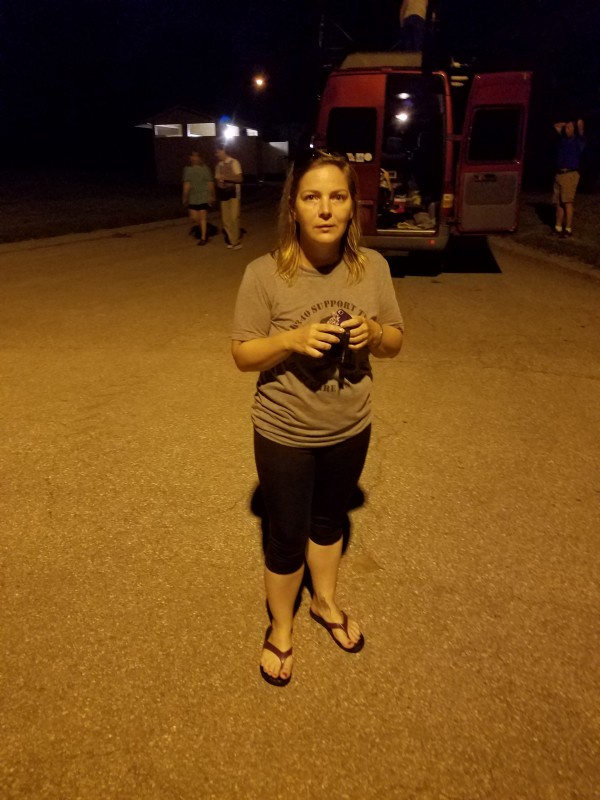 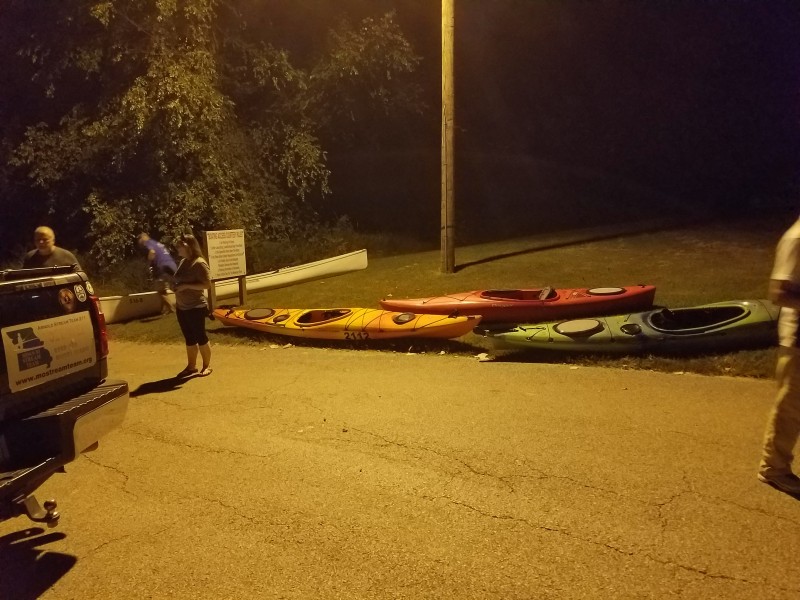 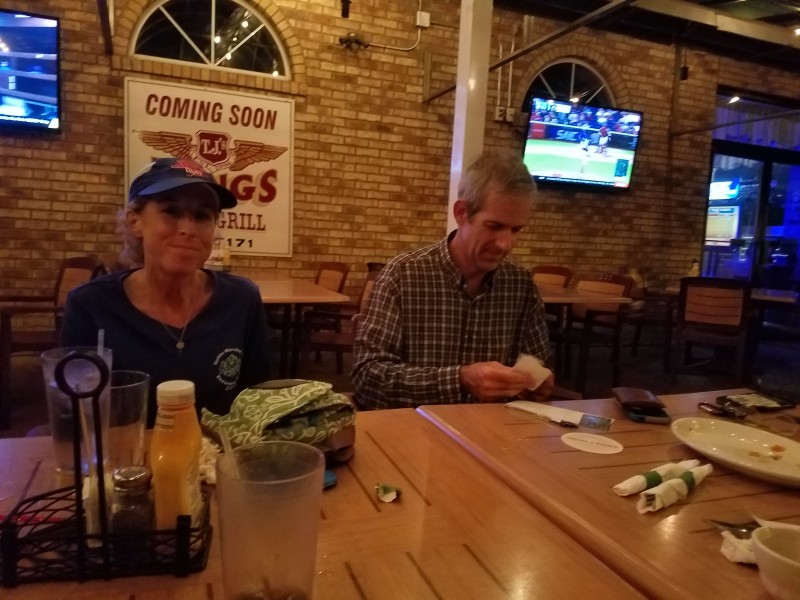 Hope some of you come out and paddle with us!

A group of us training for the MR340 met in the early hours in New Haven, MO to have a training run. For this paddle, I decided to test out a new camera setup on the boat to try and get the best possible video. The first video is the paddle iteself.

We stopped at the Klondike ramp for what turned out to be lunch. I got out of the boat and walked around while people ate their food. I ended up barefoot and wiggling my toes in the sand/mud. What happened next totally amazed me. I sunk down to my knees! 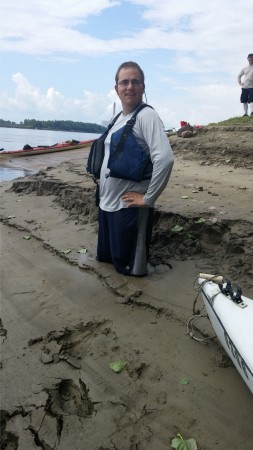 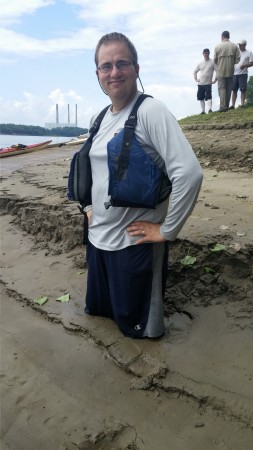 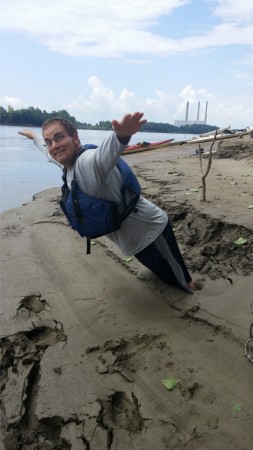 As I continued to step around, the sand turned into what I can only describe as quicksand. Stand too long and you sunk into it. Step quickly and you could go over it. I didn’t test how deep I could go as it was quite hard to get out when getting knee deep! See it in action from the video!

I wish I had gotten a longer video. Just after I got out, JoJo stepped in it and promptly sank. Its particularly funny because she weighs about 80 pounds less than me.

The river is always there to entertain us if we’re willing to participate!

I love the big rivers around St. Louis. I spend a lot of time thinking about how I can travel them. A trip I have been thinking about for a while now is a float down the Mississippi to Kimmswick, MO. The map below is a screen capture from maps.google.com with driving directions from St. Louis to Kimmswick.

With a float trip in mind, I just needed an excuse to drive down there and look for river access. On this particular Saturday, it was cold and we had a scheduling issue. We got the wrong time for Corvin’s basketball game and showed up as the game was over. We were all frustrated with the situation and didn’t want to go home and stew over the mistake. I took the initiative and suggested we drive to Kimmswick to check it out. Further more, I suggested we wait until we got down there to get lunch instead of going to one of the same old hangouts.

As we drove down, I was in a bit of a hurry because the grunts of hunger were getting louder and more often. Getting off the highway, there seemed to be only one place to eat, The Blue Owl. The kids weren’t so sure about the restaurant, but we went in and sat down anyway. The food was amazing and the regular apple pie large enough to feed a family.

After lunch, we took a cold walk around the town square looking at the different shops. They are mostly what I would call “junk” shops.

Ultimately, I didn’t find any way to access the river from the city and give up. Looking now, there is Hoppie’s Marina that we were very close too, but didn’t realize at the time.

After browsing all the stores, we ended up at Flamm City access on the Meramec river. The kids had a blast exploring and throwing rocks in the river.  Overall, it was a perfect day to be together as a family and explore our surroundings!

I’ve been talking about wanting to paddle while it was snowing for about two years now. Today, I got my first taste. I was snowing good and my boss let me out of work early for new years eve and snow. I called my paddling buddy, Jo Newbold and she was up for a snow paddle. So out to the river we went.

Unfortunately for me, once I got out on the river, the snow stopped. We did receive sleet, but no serious continuous snow. There were pockets of ice on the river. I told Jo that I was going to ram the ice, she warned me to take it slow. I’m glad I did, because the boat started to slide up the ice and got quite tippy. Lucky for me I didn’t tip over, but it was closer than I wanted.

In the ice was a fish that jumped, but didn’t get back in the water…