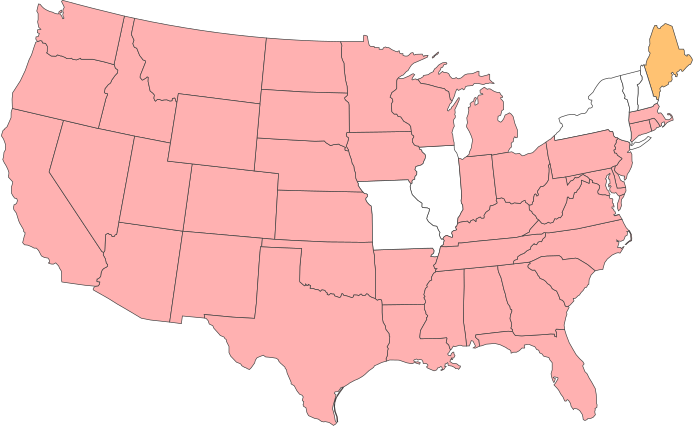 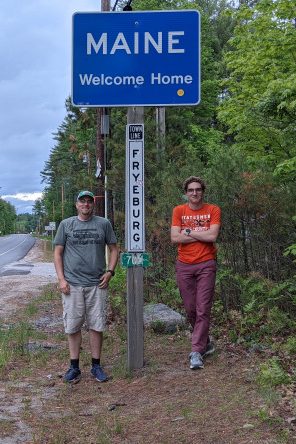 We got up early again. Today was going to be a ride along with a bonus of visiting some family that lives in Maine. The goal was to be done riding and get to their house around 2pm. We started off with an issue we don’t generally have, looking for parking. We were riding out of Portland, ME. I found a trail that took us out near the water and near a light house. Those generally turn out well. Once parked, we set off to find the start of the trail. We found it, but it was paved more for walking than riding. What does that mean you ask, it was not flat or recently maintained. Blacktop with cracks and rising and falling inconsistently along the path.

I did my best to ride, but we were walking before I knew it. Its hard to plan a trip. There are so many tools out there, but I also want to experience and explore. So Beyond the Google Maps view, I try to rarely look deeper at photos and elevation. It works most of the time. While this trail started poorly, it quickly transformed to something more interesting. We came upon a part of the map I overlooked, Fort Preble.Its on the way to the light house, and we didn’t waste any time exploring! 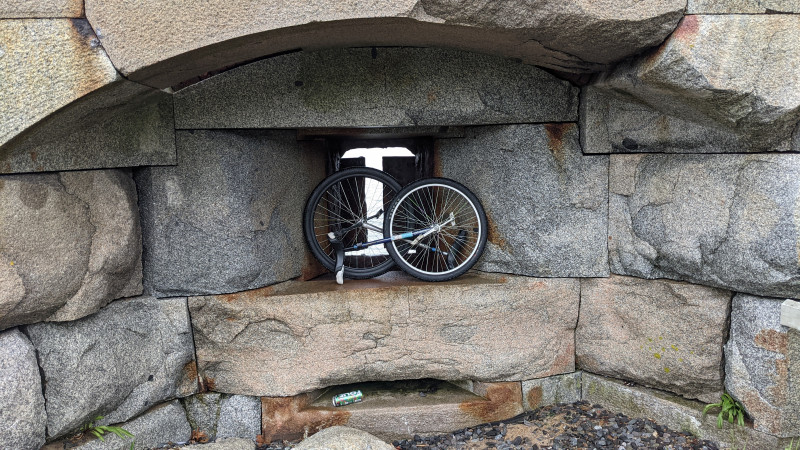 Corvin walking on top of the fort wall. I’m getting too old, so I stayed on the ground while he explored! 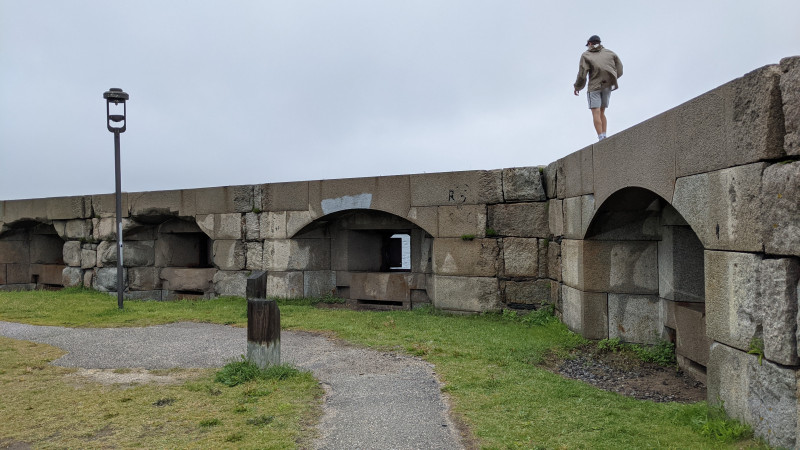 With the fort properly explored, we parked the unicycles and walked out to the light house. I have to admit, I was nervous they would get stolen during the walk and was constantly checking over my shoulder the whole time. They were there when we got back, but I didn’t enjoy it as much as I wanted to. We would have taken them with us, but the path out to the lighthouse was large boulders and was easier to leave them behind.

Off from the light house, we had more miles to ride if we were going to meet our goal. Plus there was and additional light house to see on the ride. Along the way, we were following what we thought was the trail. See the photo below before reading what happened.

Per the image above we were on the right side of the image and the path appeared to go to the right as we couldn’t see around the sign for the fancy complex. There were no signs indicating to continue straight. We went right and there were no trespassing signs. I assumed those signs were for the cars that would try to get around the arm on the drive. At that same time, to elderly women were walking towards and one of them blurted out to us “I guess you can’t read”. It was in my reach to grab my anger, let them have it and keep riding, but I held back. Instead we both dismounted the unicycles and they berated us about being in the wrong place. I politely explained a little about our trip and not being local to the area. I proceeded to ask them directions.

While the directions were not helpful, there wasn’t too much of an incident and everyone in the conversation seemed to leave satisfied. They even recommended a place for us to see before we left town. Neither Corvin or I can remember what that place was. Anyway, I don’t want to dwell on anything negative, we continued on to the last lighthouse.

The last lighthouse, Bug Light, was very easy to get to and photograph. 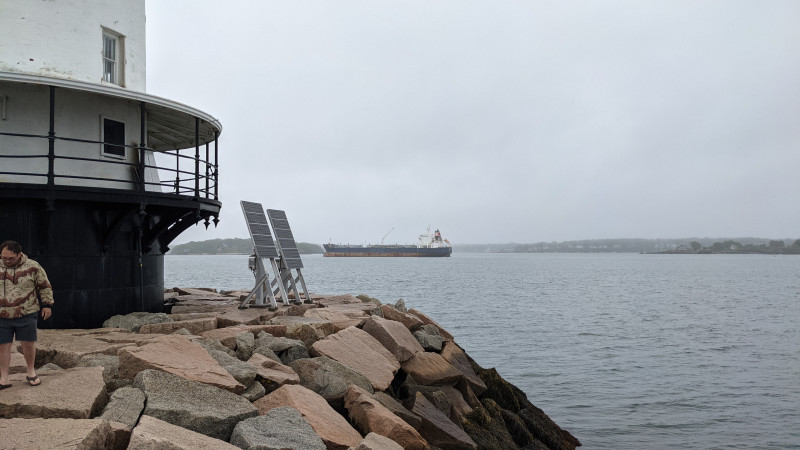 We wound our way back to the car avoiding the private trail. We got to the car and finished up documenting our trip. In my under planning, I didn’t realize that we would be significantly ahead of schedule. We had about 3 hours to spend before meeting family. We hung out in Freeport, Maine looking around at LL Bean headquarters. We’re not much for shopping, but Corvin did find some pants we purchased.

Eventually we went to to Topsham, ME. There we crossed a swinging foot bridge. 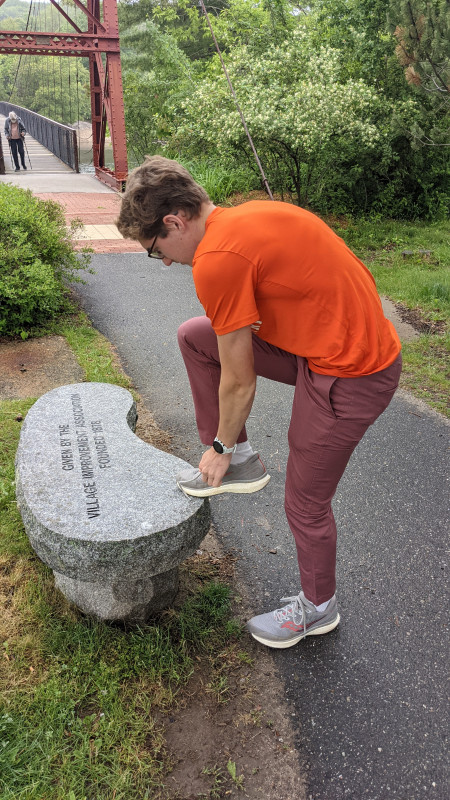 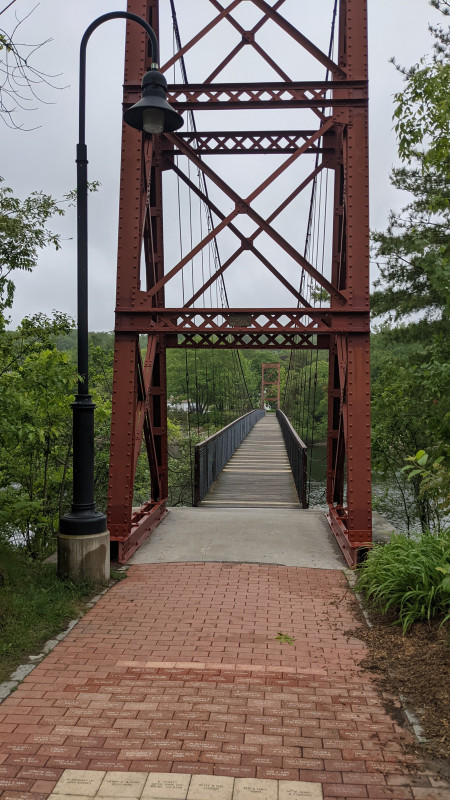 Eventually, it was time and we were able to visit family. Here I am with Corvin Sean and Michaela. 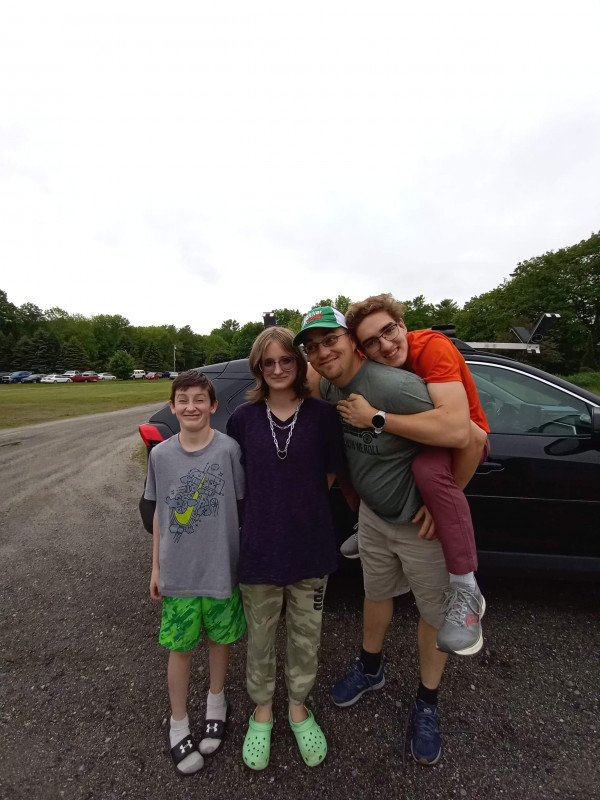 This was a perfect day to unicycle and see family that lives very far away! 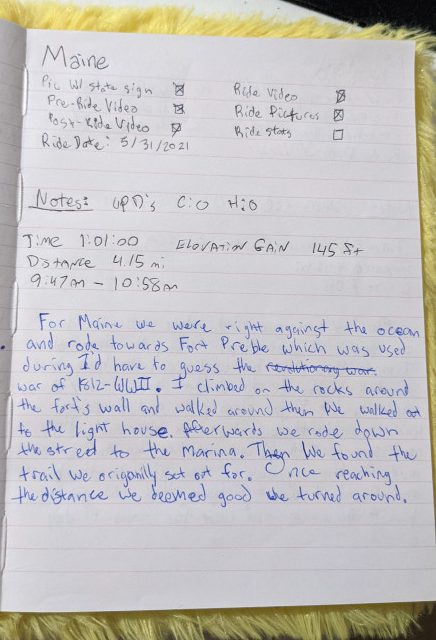