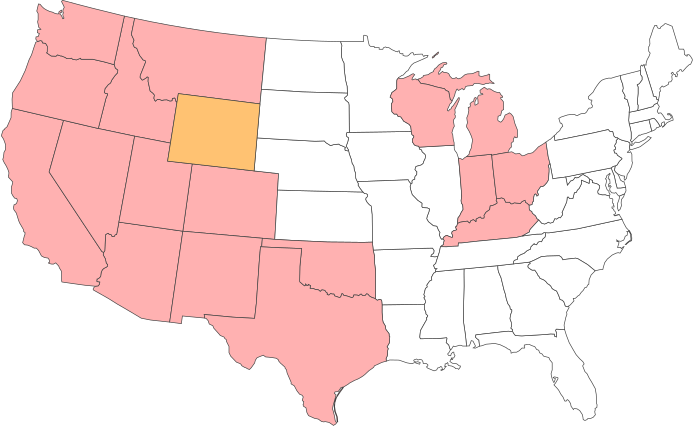 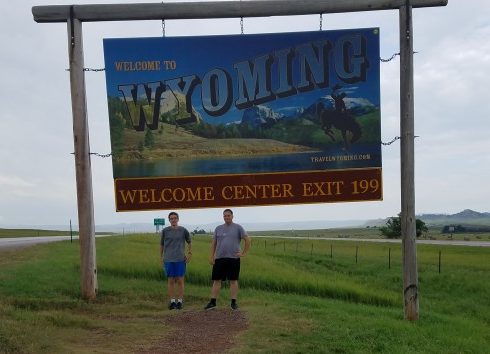 Having just finished Montana the day before, the plan was to drive down south and dip into Wyoming and Yellowstone National Park for a quick ride. When we got up at 5 am, the ground was wet from rain the night before, but looked to be clearing up for a nice day. We got up early because it was a 2 hour drive to Yellowstone from our motel. We wanted to get into the park before the crowds got there possibly making our ride unsafe.

Corvin wanted to stay awake, but quickly fell asleep as I ticked off the miles.  As the sun came up over the mountains, the view continued to change. An occasional low peak would give a glimpse to the days pending sunlight. At some point, the sun rose over the majority of the eastern mountain range. At that point, it was if somebody turned on a light switch and the day really kicked off.

As we approached Gardiner, Montana, I woke Corvin up. We planned to stop at Roosevelt Arch near the north entrance. I’ll let the photos speak for themselves. 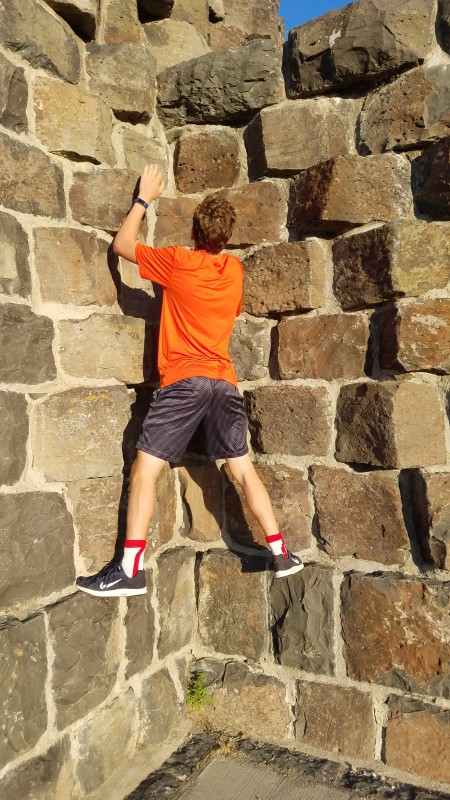 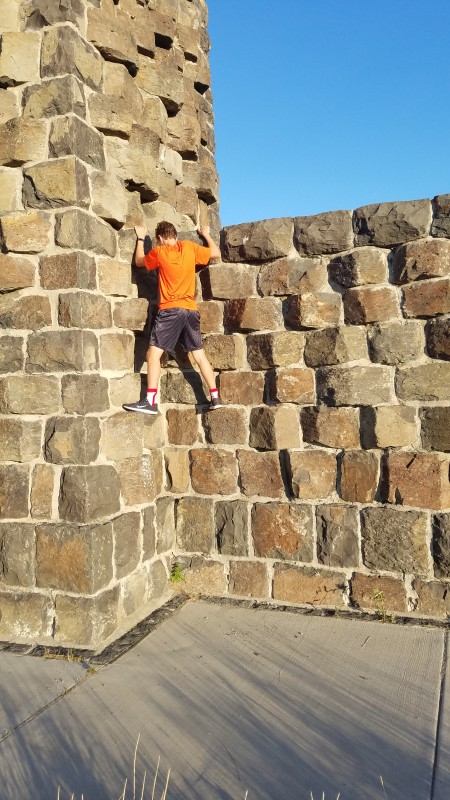 I wasn’t a huge fan of him climbing, but I was young once and remember how important it is to explore! 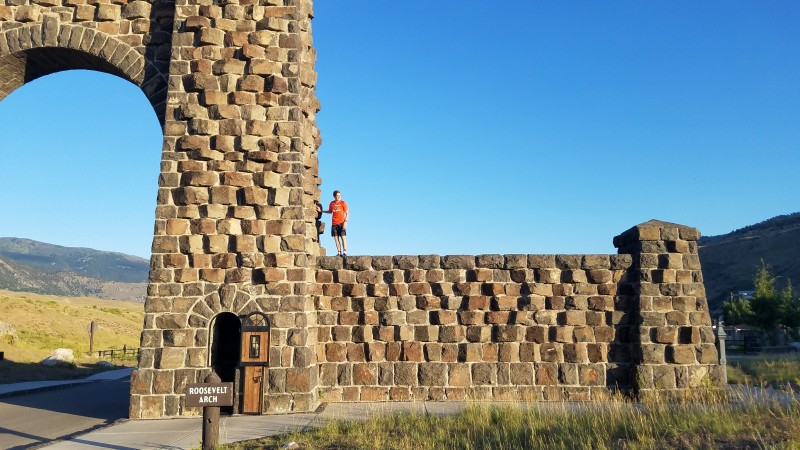 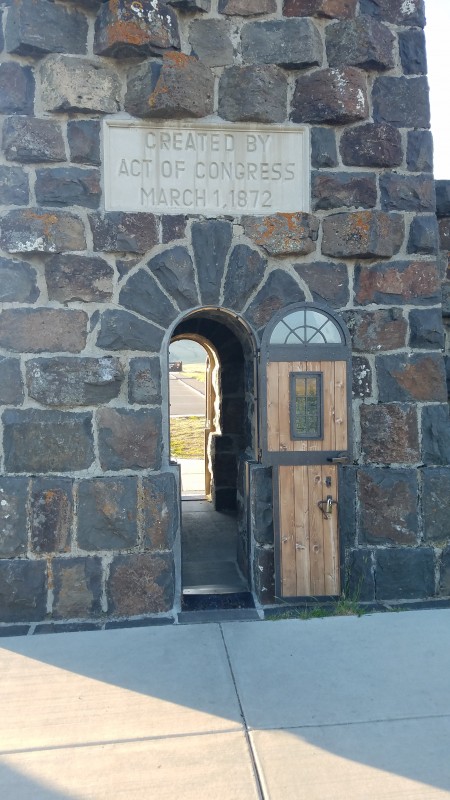 And looking back at the whole thing. 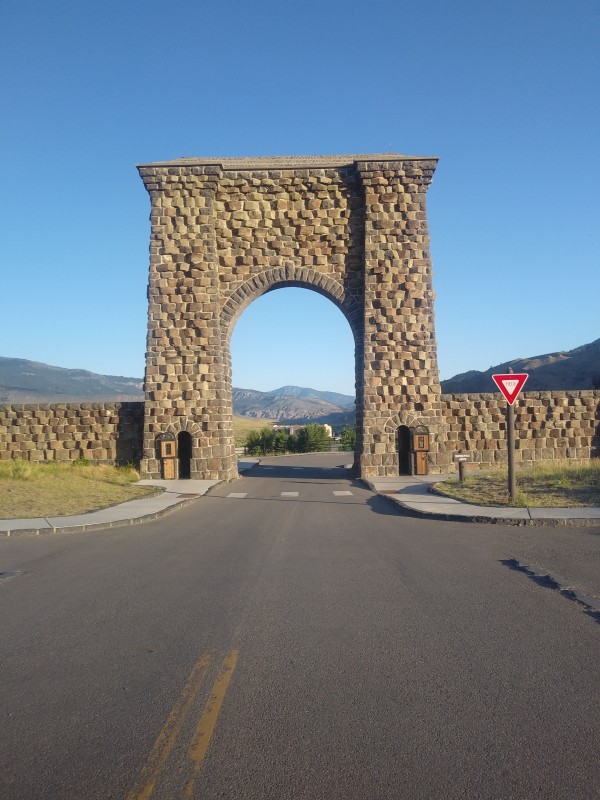 Shortly after going south of town, we entered Yellowstone National Park. We were getting serious usage out of our National Parks Pass purchased earlier in the summer and it was really starting to save us money. We were still in Montana, but very close to Wyoming. We scoured both sides of the road looking for a Wyoming state sign to no avail (Darn you Highway 89). This was frustrating, but I knew we would figure something out. Even if we had to make a hand made sign or pose next to a license plate. We did find the state sign (pictured first in this story) a day later on the west side of the state, but we’ll tell that story later.

Our unicycle plan was to start at Mammoth Hot Springs and ride the road for an out and back. We previewed the route in the car to see what we were up against and how far we needed to travel. This was going to be some difficult uphill riding and back, but we decided we were up for it.

We didn’t capture much on the way up because of the difficult uphill riding component. Here are some photos looking over the top of Mammoth Hot Spring. 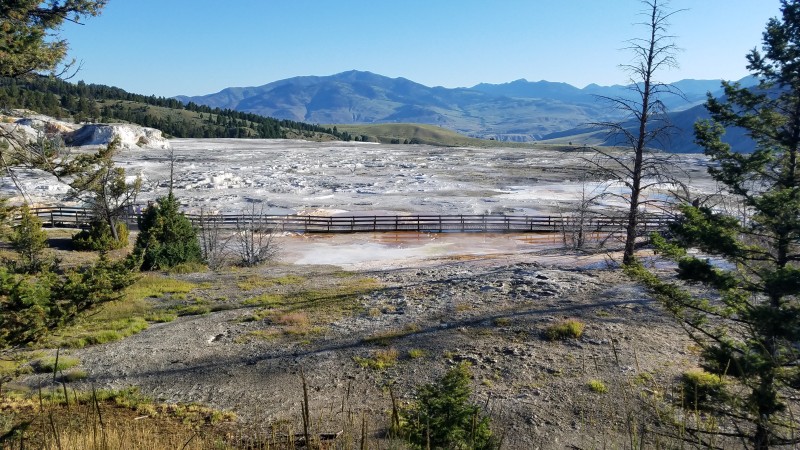 Corvin with the unicycles. 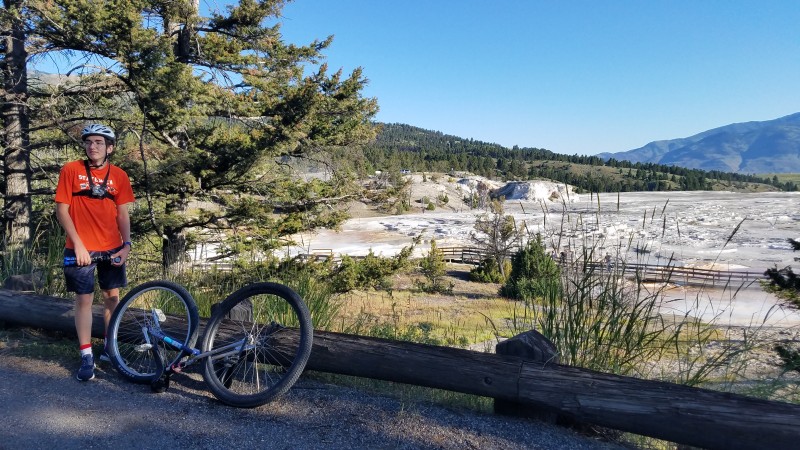 Hogan and the unicycles. 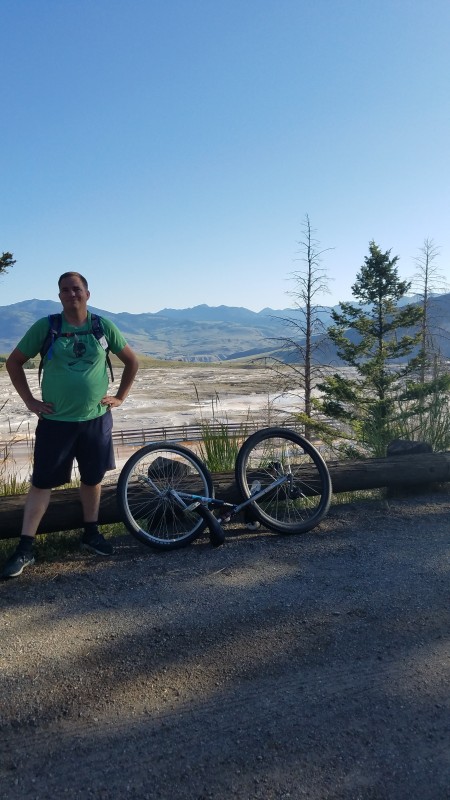 I didn’t do a great job of pre-scouting the ride as we pulled into what we thought was a small parking lot overlook and decided to ride around. It turned out to be Upper Terrace Loop Drive. The hills were short but abrupt. That meant that Corvin could ride them no problem and I walked a bunch. While the walking slowed us down, it allowed us to take in a lot more of the scenery. There were several smaller formations that people driving would not have seen at their speeds.

Our feeble attempt at a self balancing unicycle. 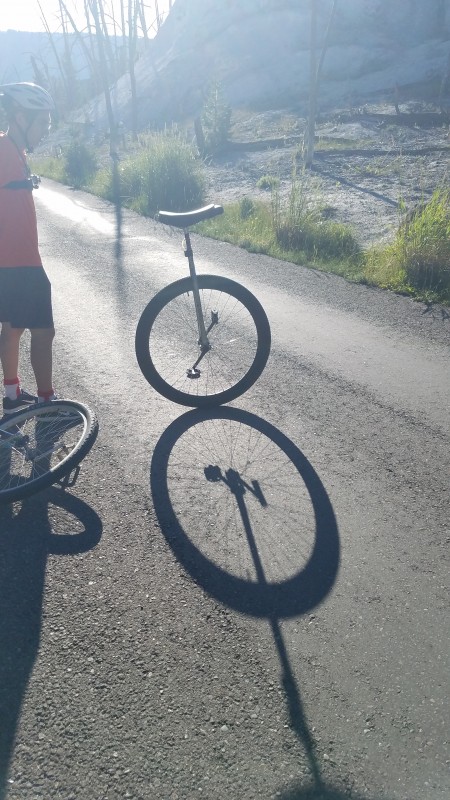 Hard to beat these other worldly views. 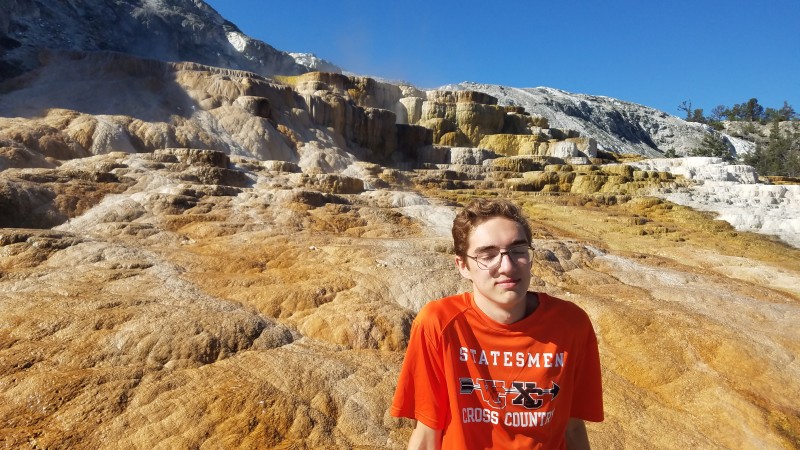 It looks like snow, but its just deposits from the spring. 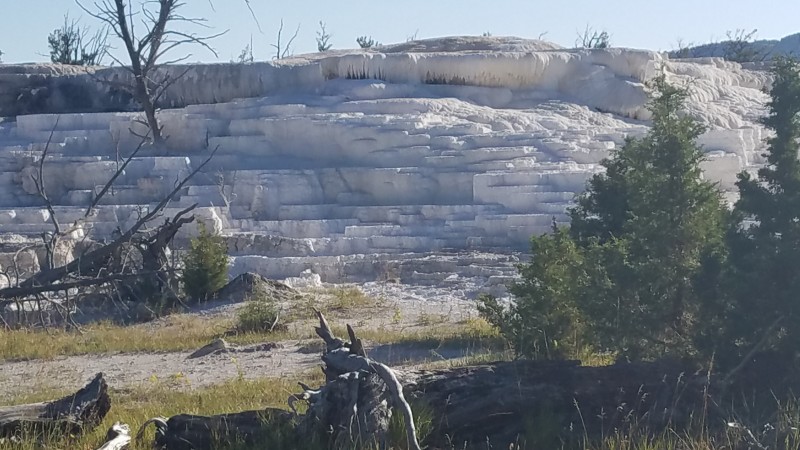 This little one ran under the road and wasn’t that big, but still interesting. 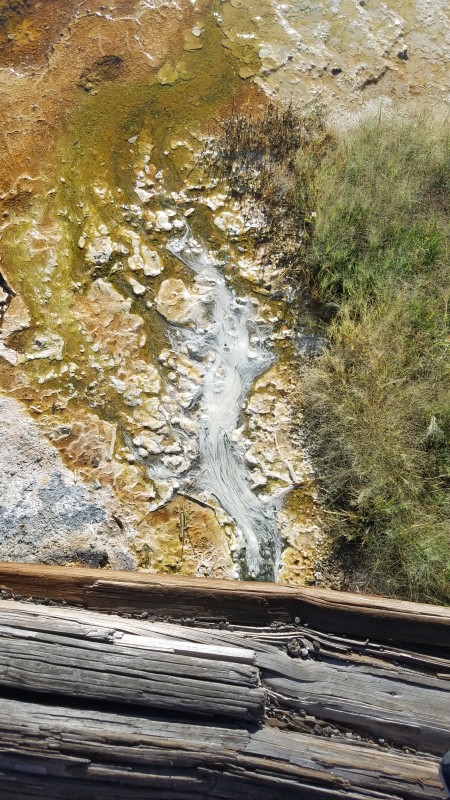 I’ll let you describe this to yourself, I have no words. 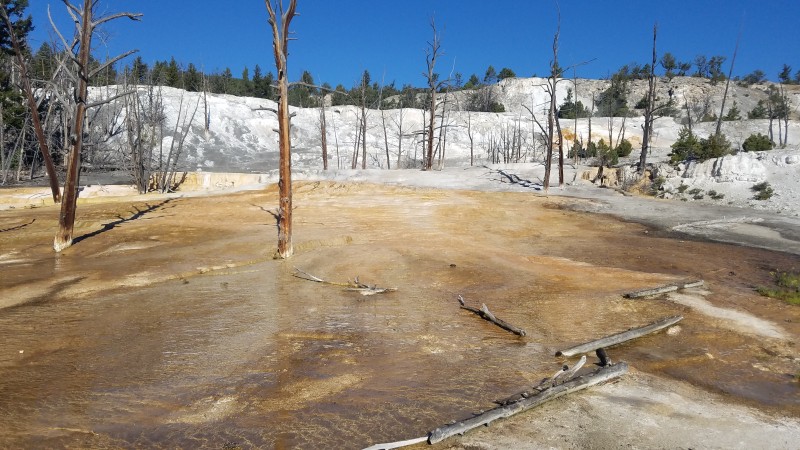 Eventually, we made it out of the loop and started on our way back down. Again, the amazing views!!! We didn’t take many photos as it was a rather steep downhill and we didn’t want to fall. Traffic was starting to pick up as the day was getting later.

After we finished up our unicycle ride, we put the unicycles away and hiked on Mammoth Spring for an hour before heading out of the park. I’m not sure if Corvin was more interested in the girl or the view… 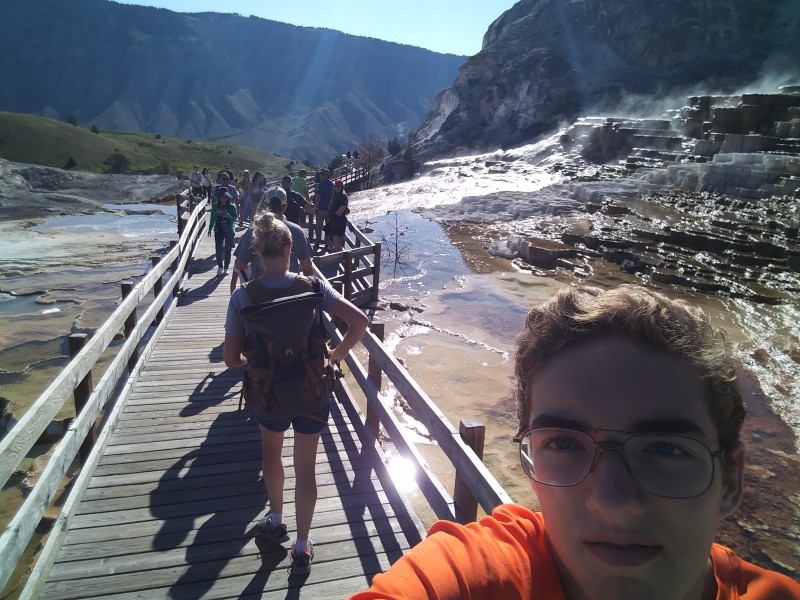 You won’t meet many people that travel this far to go to Yellowstone and only stay for 3 hours, but we had places to be! 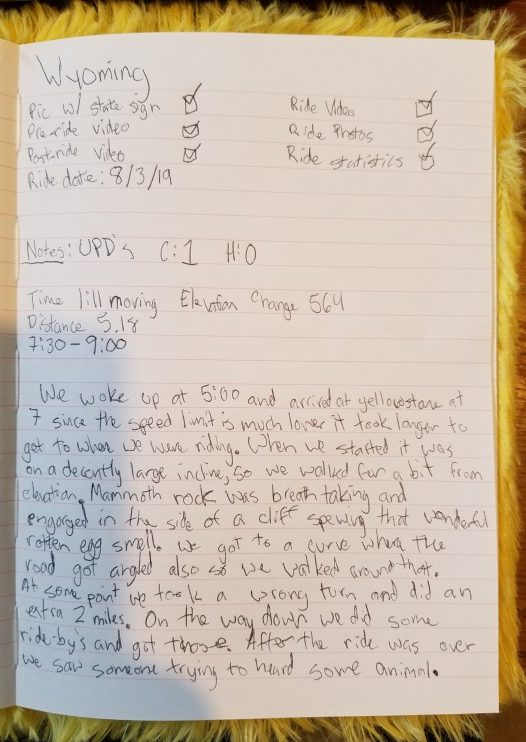 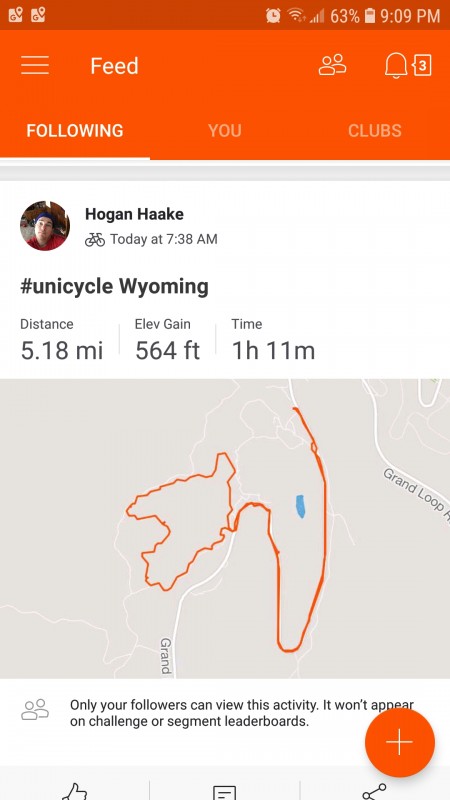