On Thursday night, the day before, I made up my mind and decided what I wanted to do. I had Friday off while the wife and kids had school and work. I had a whole day free and to myself, my job was to make the most of it. I had asked my paddling friends earlier in the week if they could join me and they all had commitments. So I mapped out a 20 some mile route that took me from the last ramp on the Meramec river up to the Jefferson Barracks/I-255 bridge (JB) and back. What makes this route so interesting to me is that I have never paddled solo on the Mississippi river before. I was also planning to do half of the trip upstream!

Okay, so maybe there is one more thing that is going to make this trip interesting. I have a new kayak. A Hobie Adventure 16. This boat is a peddle powered sit on top kayak. To date, I have had about an hour in the boat on a lake and an additional 10 minutes on the Meramec river the previous weekend. So my experience is very low.

I set my alarm for 5:50 am on Friday morning excited to get out and start. When the alarm went off, the house was cold and dark, and I was a bit scared. So I decided to sleep for another hour waiting for my “standard” alarm to go off. From there I would just have to leave and take this trip. After the second alarm went, I dressed quickly and loaded up my van. I tried not to think about the trip that was in front of me. I realized quickly that I was quite scared! If I didn’t do this trip today, I didn’t know if I would ever be able to go on this river solo!

I kissed the wife and kids goodbye (hoping that it wasn’t for the last time) and took off. My first stop was to find a Quick Trip (QT) gas station on the way. I needed to get some breakfast and other supplies for the river. At QT, I picked up a breakfast sandwich, coffee, two water bottles, Gatorade, and trail mix. It was a strange purchase with mostly liquids, but I didn’t want to get dehydrated on the river. Okay, and maybe a bit of comfort food to help prod myself along!

At the ramp, I took my boat down and surveyed the surroundings to make sure I would find it when the time came to leave. I walked back up leaving my boat to park the van and bring the rest of my gear down. Once down at the water, I had the unfamiliar act of juggling all of my gear. In the past, I would just throw it in the canoe, tie a few important things down and shove off. With the sit on top kayak, there is much more consideration and preparation that goes into putting into the water. I had to stow everything as there is nowhere to just set junk and hope that it stays. 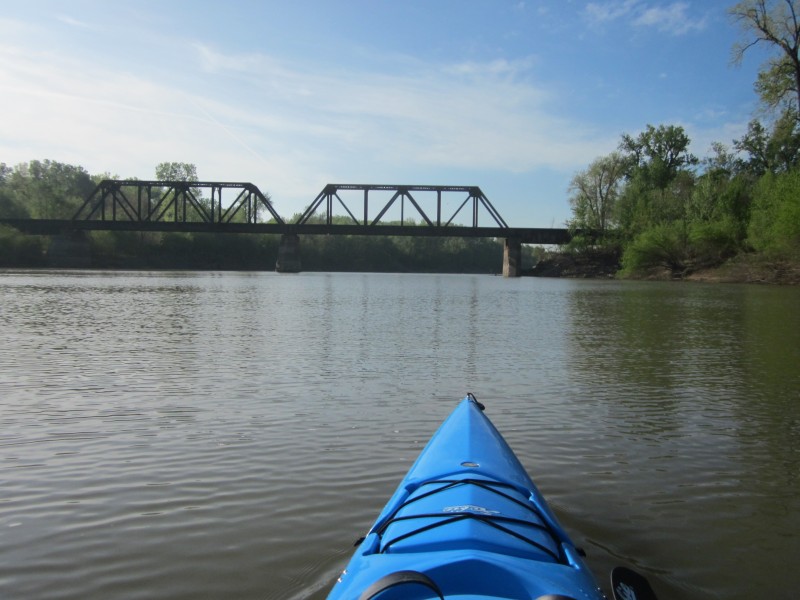 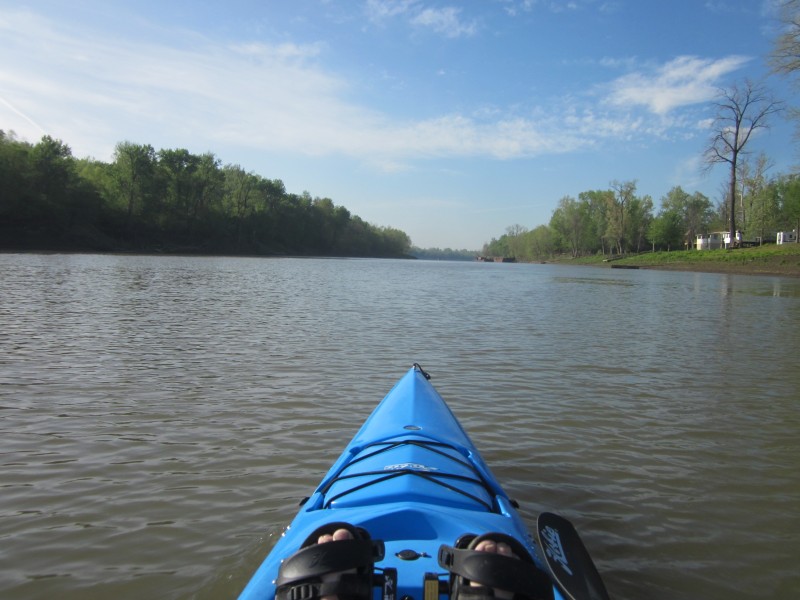 I had trouble getting the Mirage drive system in while the boat was on the land, so I carefully set it in the boat. I was extra careful here because the drive doesn’t float and it wasn’t secured to the boat. This was actually dumb, so I’ll have to figure out how to do it before I put the boat in the water next time. I don’t’ want an accidental sinking of my equipment! I pulled off my socks and placed them where I would sit so they would not be lost and I could put them back on if I got cold. I made the conscious decision to point the boat downriver to the Mississippi and started off.

The temperature was somewhere around 50 degrees when I set off and I was cold. I learned quickly that pants won’t work on this boat as they get caught in the water by the Mirage drive. I ended up pulling the pants up above my knees so they would not get wet and create extra drag. I also quickly got hot and took off all my layers down to a single shirt and PDF. I stuffed the two other layers behind me under the bungee cords. I later learned after my paddle that the back compartment is quite wet as the water comes up from the drain holes. This caused extra weight and made my clothes worthless if I wanted them later to warm up. I’ll have to find a better solution for this!

I took a few photos on my way down, but I value most the video I took of me heading into the Mississippi. I cut it a bit short as I wanted to have maximum control as I hit the big river!

Going out on a big river is always fun for me! There are so many different things to see. The industrial developments are always the most exciting for me. This stretch of the Mississippi didn’t disappoint either. Right away, I came across the Ameren Meramec power plant. They had a large presence along the river for what appeared to be delivery of coal to the plant. 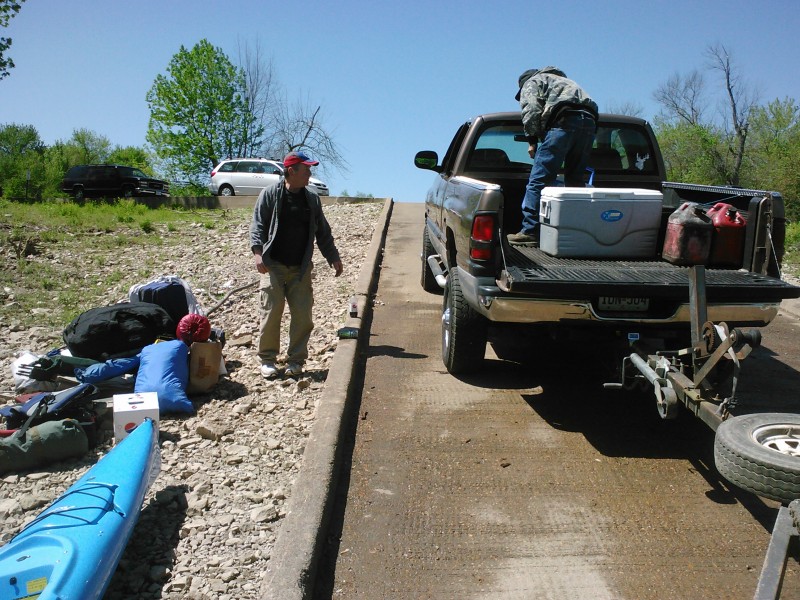 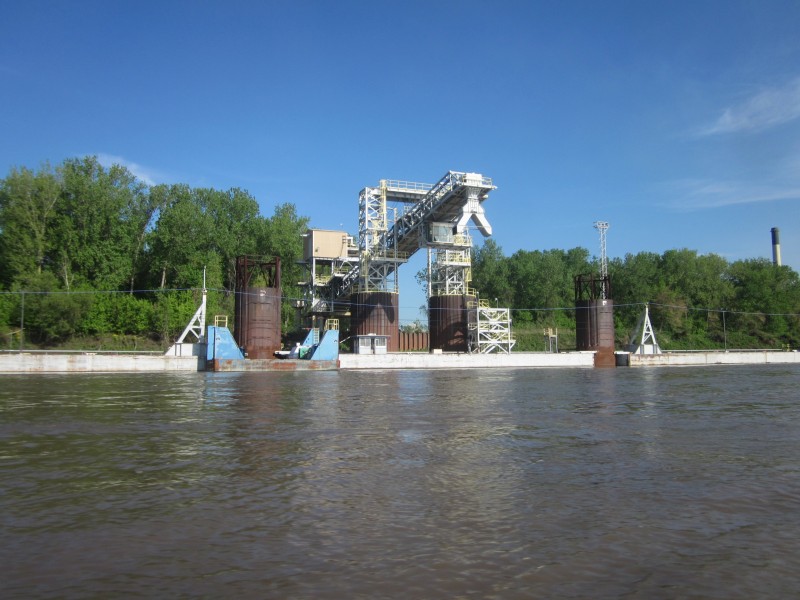 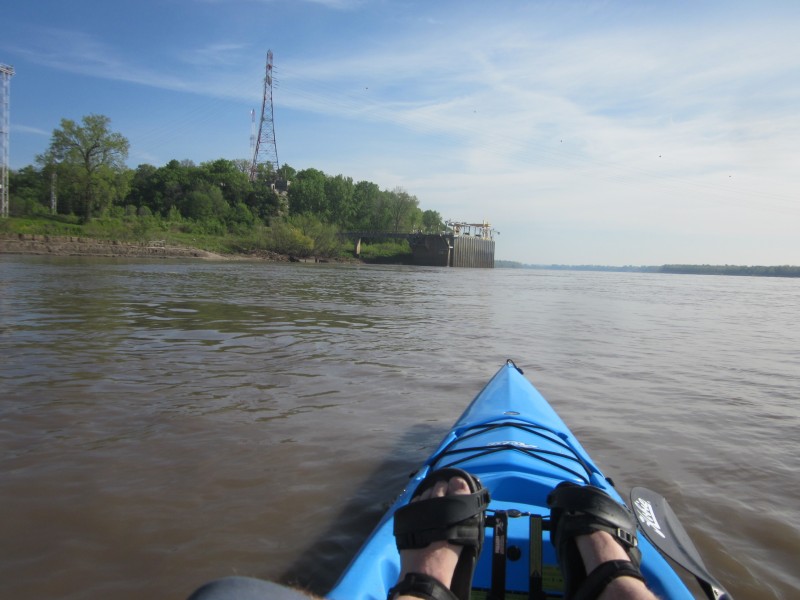 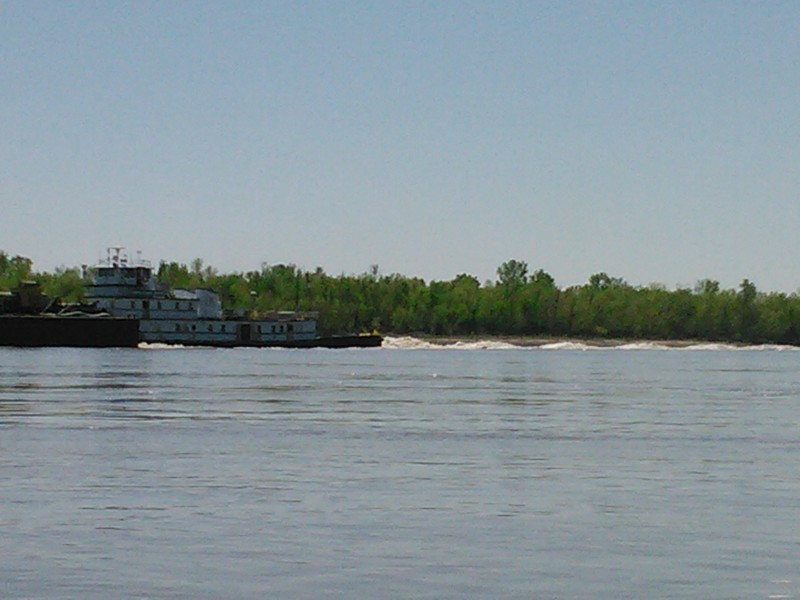 After my paddle, I tried to get to the power tower in the photo above to closer examine the stone work. But the guard at the gate wasn’t having any of it. I’m not sure if he was having a bad day, or just didn’t like me. About the only words out of his mouth were “private property”. So I didn’t get any closer inspection of the stone work.

I went up the river about six miles just above Cliff Cave Park before I had enough upstream paddling. I tried to stay in the channel of the river so I would not scrape the Mirage drive on the boat, but I only got about 2 mph of speed upriver doing that. Towards the end, I used the slack water caused by the wing dikes to go much faster up!

On the way back down, I stuck myself right out in the channel enjoying all of its benefits. Between the river and myself, I made an easy 8 – 10 mph coming back! I even made it a point to get right out with the buoys.

I was quite glad to be back at the boat ramp at the end of the paddle. You can see the whole route/mileage/time on my fitness blog at FriendFit.com. But back to the ramp. I pulled up and talked to a fisherman for a few minutes. Then I was ready to walk my stuff up. But I noticed a truck coming to back down and launch their boat. So I moved my kayak to the side of the ramp. I walked my stuff up and moved my van to get the kayak. By the time I got back to the ramp, the guys had launched their boat and started unloading all of their stuff right in front of me!

Rather than getting furious, I just waited an extra 15 minutes for them to unload their pickup truck and get out of the way. It was an amazing paddle that I hope to do again soon!