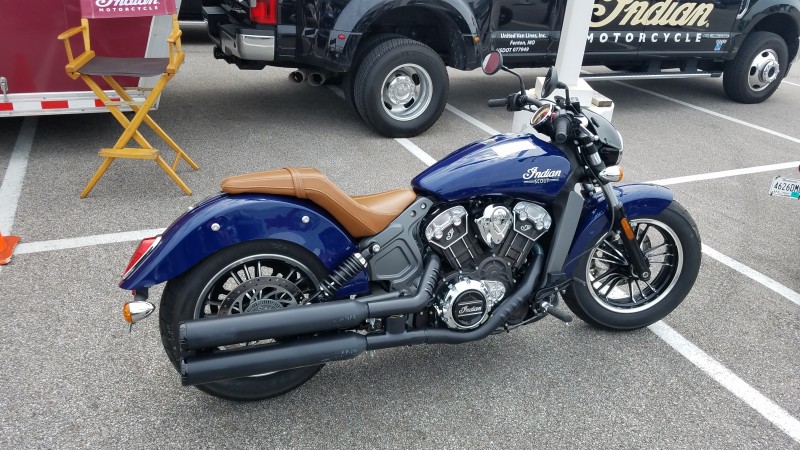 Mungenast Motorsports in St. Louis is a dealer of Indian motorcycles. I like motorcycles and love the opportunity to ride any one that I can. I found the schedule of the demo rides and got two of the guys at work (Binary Bandits) to join me for the demo ride. We scheduled a 2 hour lunch to ensure no clients would ruin our good time!

When we got to the dealer, I quickly noticed the Polaris Slingshot and had to get a photo. I love the look of them! 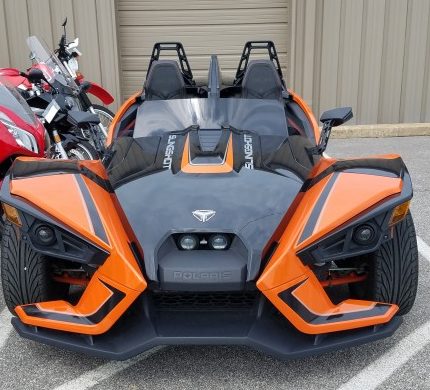 After some quick dreaming, we went in the shop to sign our lives away for a demo ride. We got there early, beating the line. Our reward was to be on the first demo ride of the day and we each quickly picked our ride.

Eric picked the smallest bike which still sported 70 hp and lots of torque. 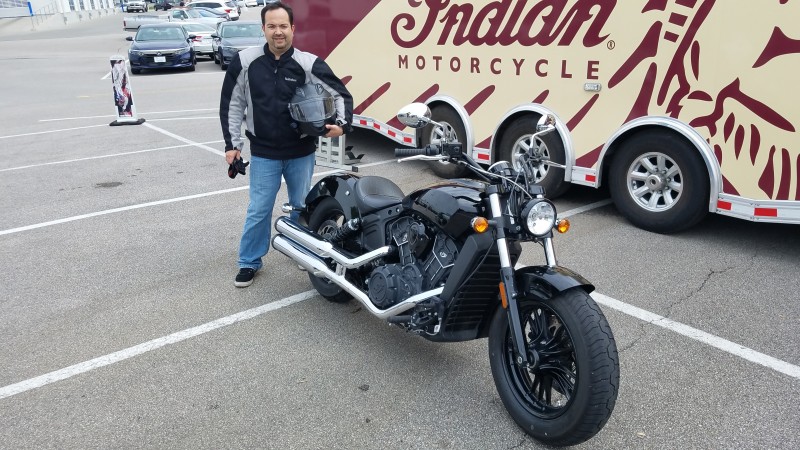 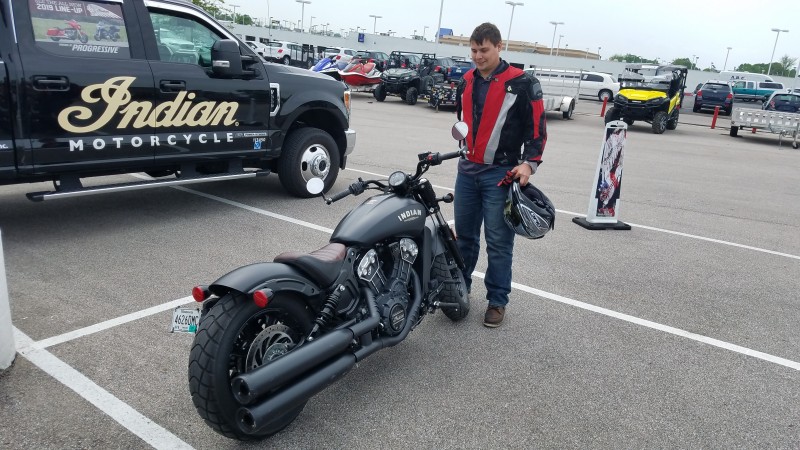 I’m a huge fan of blue, so I picked the blue Scout. I’ve liked the look of these motors for a while and I was excited to ride. Before I get into my view of the ride, a few pics of the bike first.

The cost of accessories on the bike I rode. 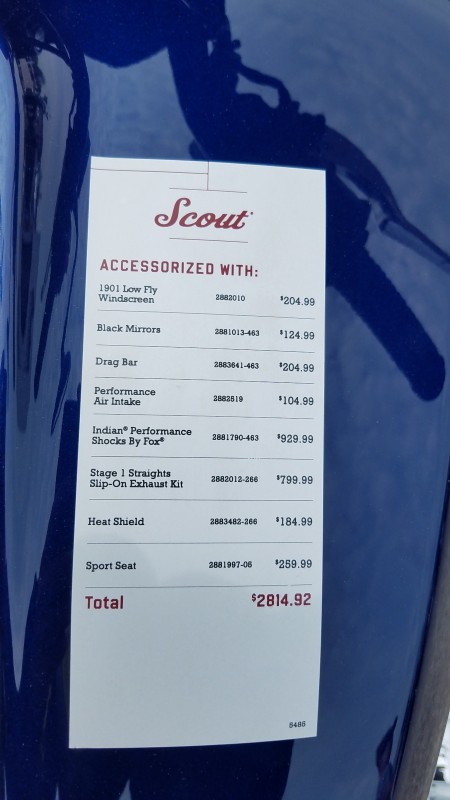 The cost of the bikes. 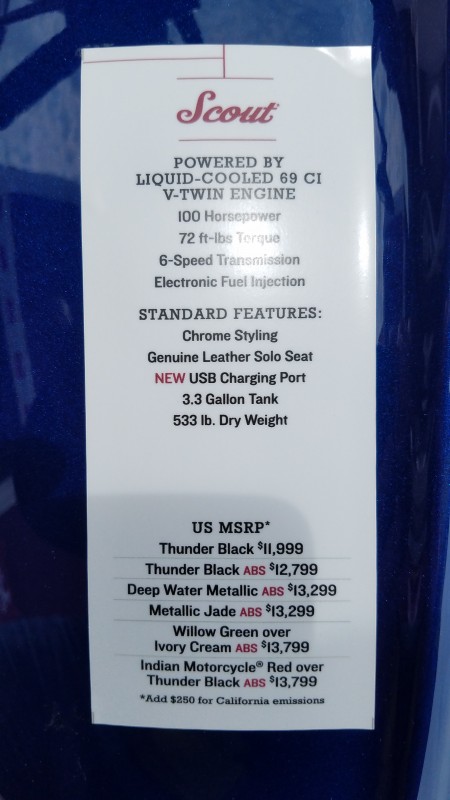 The little details in the seat are great! 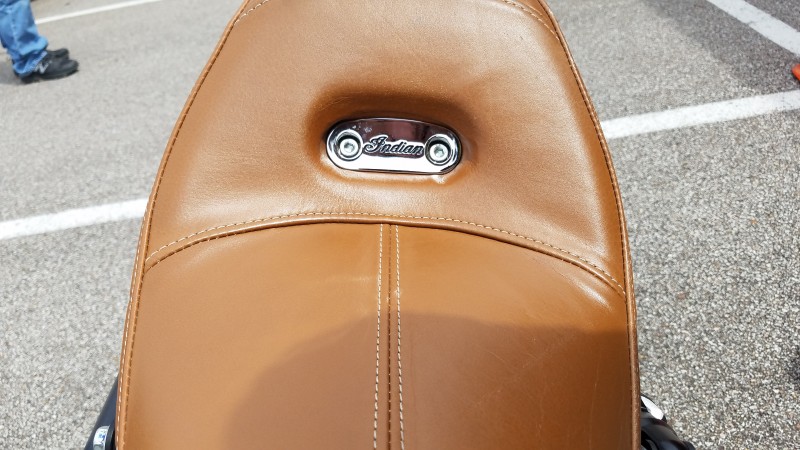 Ok, I hated the bike. I’m not one for cruisers and the looks of this one couldn’t sway my opinion. For reference, my current bike is a 2017 Suzuki V-Strom 650. The V-Strom is an upright seating position and is much taller.

The first thing I noticed is the bike is very low to the ground. I felt vulnerable like traffic might not see me. I’ve seen bigger scooters on the road. Because it was so low to the ground, with very little effort, I drug the foot pegs on both sides of the bike during the demo ride. If you’ve never done this before, it is very freaky. Add that to the fact that I’m new to the bike and it can really upset your ride.

The lack of windshield really pushed me around on the highway. I felt like I could be pushed off the bike by the wind though I never came close to that. The aftermarket exhaust was extra loud. I’m not a fan of loud bikes, causing me to like it even less. Speaking of exhaust, I thought my right leg might burn off due to the heat from the exhaust. On a warm summer day, this would really suck! The last thing that was strange for me was only having one disc for braking up front. When I did pull hard on the brake (yep, it is a demo ride), the brake made a loud humming protest. This noise didn’t go away after multiple attempts.

The bike did have an amazing amount of power. I must be getting old because it felt like too much power. I’ve gotten used to my 650 and find it more than adequate for the road. Funny thing was that a guy on the demo ride just kept talking about how many cubic inches the motor was as if that was the most important thing.

I don’t wish Indian any bad luck or hate their motorcycles. The Scout is just not right to me. I wanted to test ride the FTR 1200. It has the seating style that suites my riding better. Maybe next time!