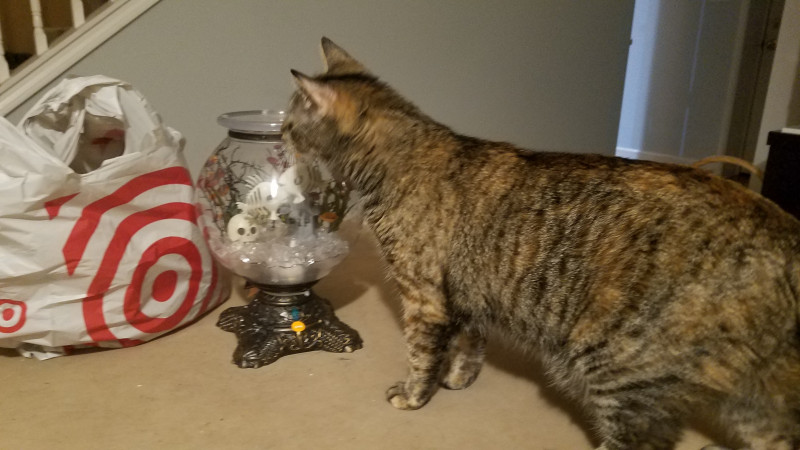 I was just around the house doing noting specific when I got a phone call. Caller ID showed it was my sister Hannah calling. I was delighted to hear from her and answered the phone. We had the normal pleasantries before she got to business. “So I wanted to ask you a favor. You don’t have to do it if you don’t want to.” said Hannah. I do my best for my family and asked her what it was. I’m going through my mind wondering what it can be since we live approximately 5 hours apart. “So you know that I like fish tanks. And I found one that I really like, but I can’t buy it online. And I was looking all around and its at Target, but they won’t ship it.” Hannah continued with probably more reasons and I just wondered where it was going. “So I only found one, and its at the Target off Hampton in St. Louis. If its not too much trouble…”.

Since I wasn’t doing anything, I promptly headed out to Target. On the way, I received the info texted to me. It was a Halloween decoration. The haunted fish tank didn’t involve any water. When I got to the store, there was exactly 1 left in stock. Great thing that I left right away to pick it up. Hannah said I could get it to her whenever, she was just thrilled to know that she owns it!

We considered shipping it, but it didn’t have a box, so I personally delivered it a few weeks later. Got to love family!