Halloween fell on a Friday this year. I had plans and the kids were okay with it. I dressed for work like any normal day, but then put my clown outfit on over it. From there, I grabbed my unicycle and kids and proceeded to walk the kids the mile from our house to the grade school. We got lots of smiles along the way and the kids enjoyed the extra attention. I occasionally rode the unicycle, but mostly walked with the kids. Once the kids were deposited at school, this is where the fun began!

Riding away from the school, I got lots of smiles and kids pointing. Several parents looked surprised, but happy too, When I got back to the main street, I started riding my way to work. In the less than 2 miles it took to get to work, I believe I was honked and cat called 50 times. I even glanced a man taking video with his phone as he drove by slowly. I distinctly remember a man in a large dump truck yelling, typical construction workers. I now know what it feels like to be an attractive woman 🙂

As I approached my office, there was a building that was still under construction. I came upon two of the workers sitting on the tailgate of a truck looking at their work site. As I came up silently behind them, I said in a strong voice “Are you guys just clowning around!”. They turned with movement ready for a physical confrontation. Upon laying eyes on me, the first one said “You’ve gotta be kidding me!”. I smiled, tipping my red nose at them and continued on into work!

I found out later that one of my co-workers didn’t realize it was Halloween and wondered why I came to work dressed as a clown for the day. 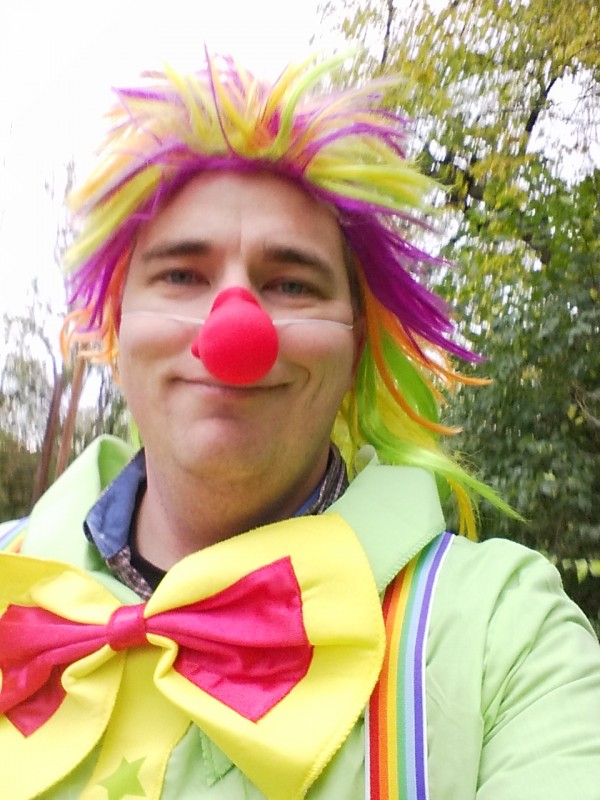 Later that night,we went out trick-or-treating with the Brown family and had a great time.