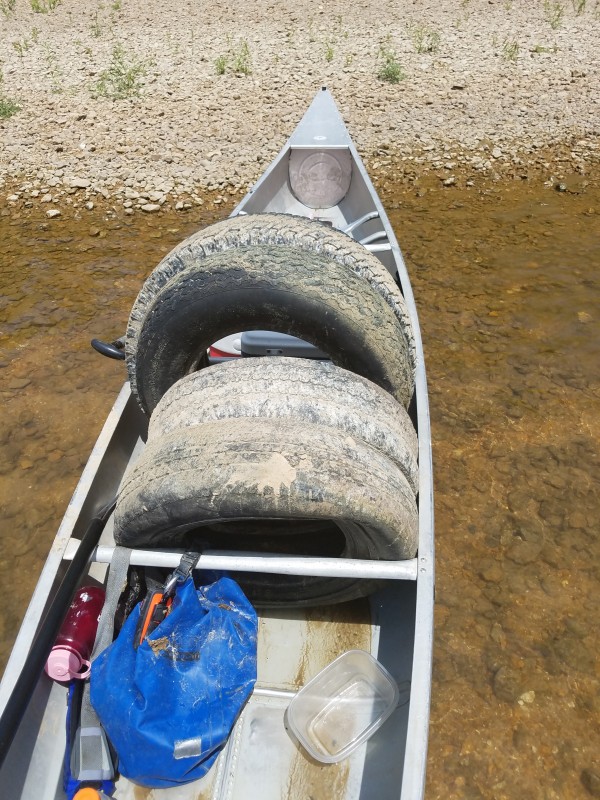 Its been said many times that “A bad on the water is better than a good day at work.”. Little did I know that today was going to push that theory to the limit…

It started off as any national holiday should, with excitement having the day off work and thinking about the day’s events ahead. Sonora was in Kansas City with Hiatt, so it was just Danelle, Corvin, and I. We were meeting a local group called “Kayak Swarm” to paddle down the Meramec river. The plan was to meet early (at least for them) around 9am to start paddling. We were paddling from Robertsville State Park to Pacific Palisades, a distance of approximately 11 miles.

We brought a canoe and a kayak for this trip for the three of us. Corvin and I started in the canoe and Danelle in the kayak. All told there were 27 boats and I believe I was the only 2 person vessel. 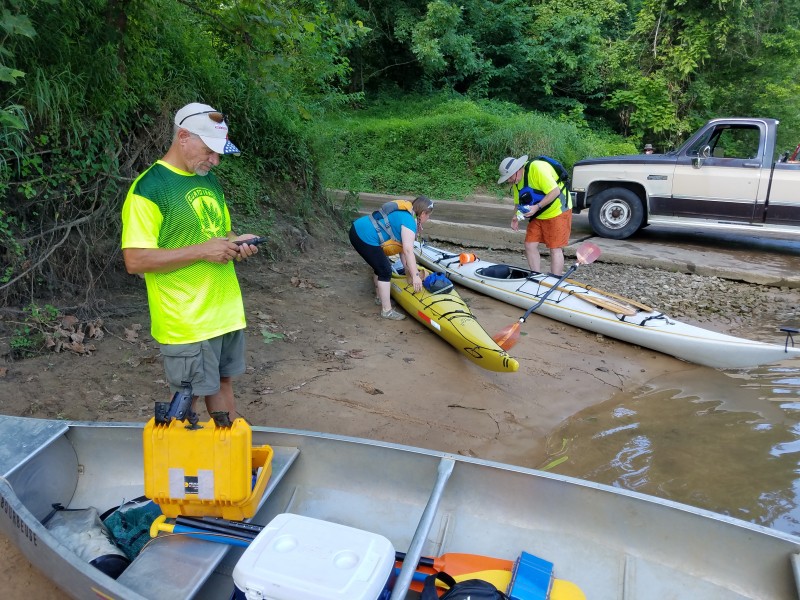 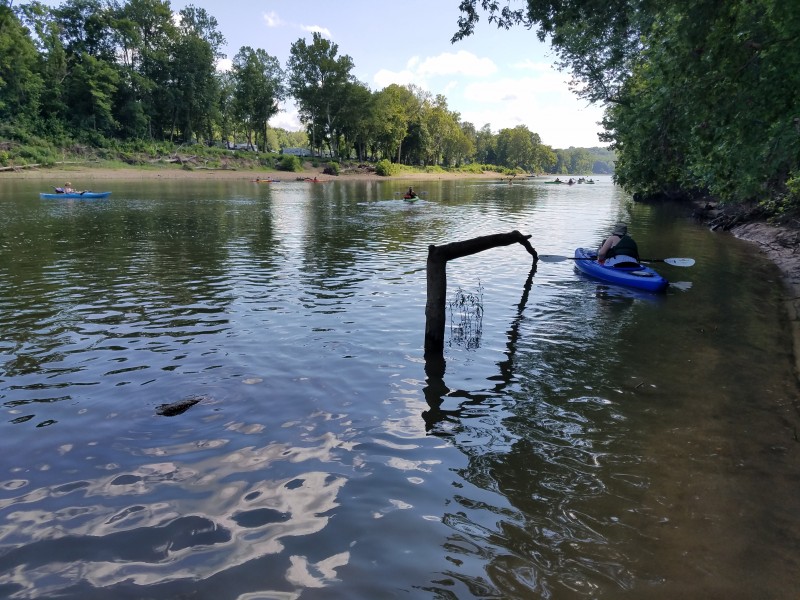 It didn’t take long after we left Robertsville before the whole group pulled over to hang out. This meant swimming, drinking, and smoking. Note that all are adults (except for Corvin who only participated in the swimming) participating in the activities. This isn’t my style of paddling as I like to go faster with less stopping. I knew what I was getting into before signing up and just went with the flow. 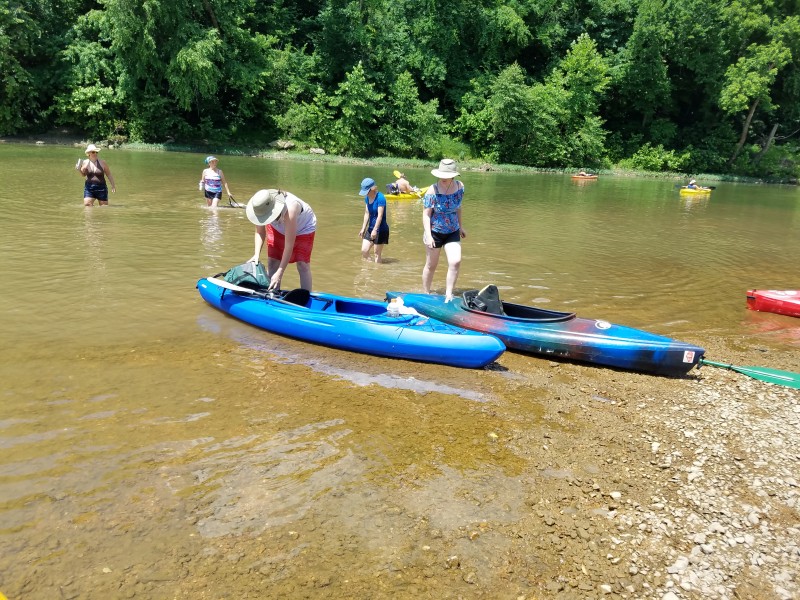 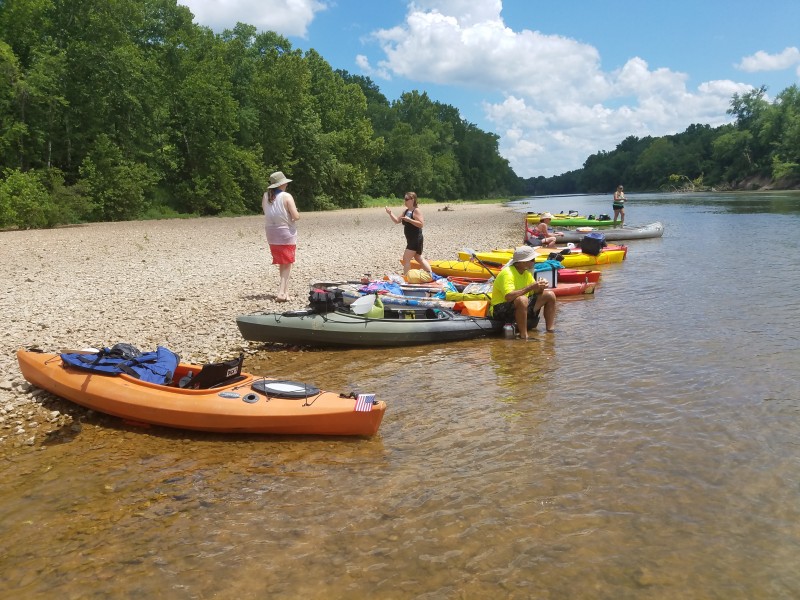 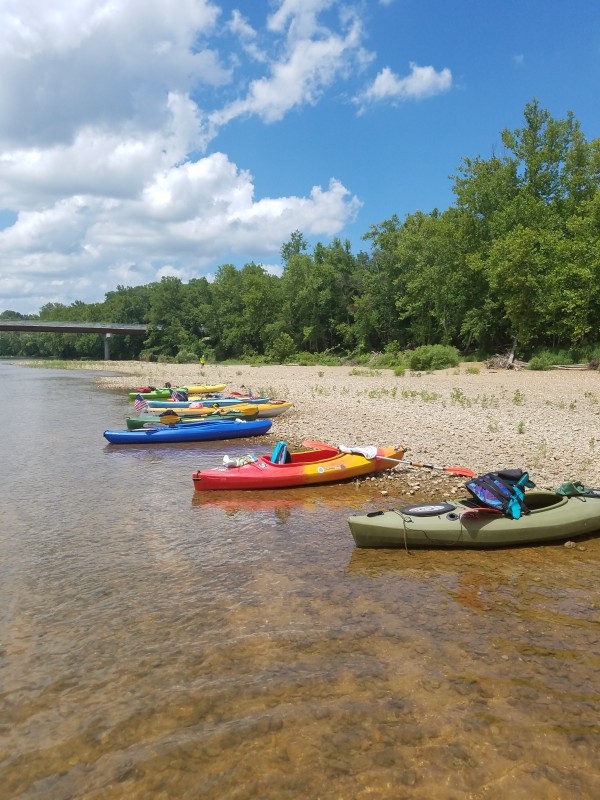 To keep myself busy and make the paddling harder, I picked up some tires out of the river during my paddle. This was not a cleanup, but it gave me some extra paddling to accomplish!

At one of our numerous stops, Sara and Brian were missing. We waited quite a while before they showed up. Sara had tipped her new to her kayak and was having issues. She was upset from this and wanted to be done paddling, but was not near the finish. After some discussion, Danelle paddled Sara’s boat, Corvin took our Kayak, and Sara sat in the front of the canoe with me. I promised she didn’t have to paddle, just relax and I would bring her home safely.

For those not familiar with the Meramec or small rivers, they often look different as you zoom in on the map. The big rivers that are seen downstream are much smaller upstream. Sometimes. the river gets split in low areas. Here is a satellite image (thanks Google) of one such area. 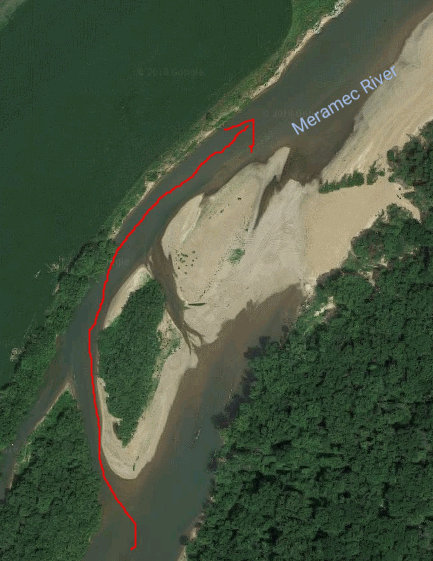 When you get to a narrow area, every boat has to filter into a tiny space before they get back out into an open area. Unfortunately for us, it was now after lunch and the party boaters were starting to come out for the day. I was in a channel like the one on the map above with Sara. There was at least one boat in front of us and another behind us. As you can see from the picture above, the canoe was loaded down with tires, so it was less maneuverable than normal. It was at this point that we heard the tell tale sound of a motor boat coming around the corner towards us.

We expected the motorboat to see kayaks and a canoe randomly across the channel and wait a few moments for us to get organized and out of his way. Instead, this guy gunned the boat and started coming at us faster. I took as quick of an action as I could and moved the canoe to the right. The motorboat continued coming towards our un-powered boat. As the guy passed us on our right. We’re already on the right side of the river, so he is essentially driving on the left side of the road with very little room between the shore and us. A few things happened quickly during this pass. First I could have reached out with my hand and touched his boat from our canoe. This is TOO CLOSE!!! Secondly, I gave the guy a middle finger salute to show my displeasure!

Sara and I both had a sigh of relief after he passed us and didn’t kill us. A few moments later, I hear his boat crash on the shore behind me. I didn’t mind, hoping he came to his senses. Instead, I start hearing a maniac yell “You in the grey shirt, paddle back up and talk to me”. I was the guy wearing the gray shirt. The most important thing to me at this point was to ignore him and get out of the narrow channel. All we wanted to do was get away from this madman!

But luck was not on our side, and we heard a motorboat coming back at us! I had our canoe close to the shore as I didn’t know what to expect. As the guy passed us, his wife was now driving the boat. He hopped out of his boat before it stopped and started walking to me.

I’m getting frustrated just remembering this as I write it… Basically, he came up to me trying to fight. He couldn’t understand why I gave him the middle finger. He was adamant that he was in the right. At one point, he shoved me with both hands against my chest. The dude had his shirt off and didn’t appear to miss many days at the gym. I figured I would get knocked out this day and was preparing myself.

By some divine luck, I was able to talk him down and they eventually left. But not before his wife offered to come back and fight me if I didn’t respect her.

Anyway, while all this was happening, Brian was able to get a few photos of the boat and live report it to the Missouri Water Patrol. Here is what the jerk’s boat looks like. 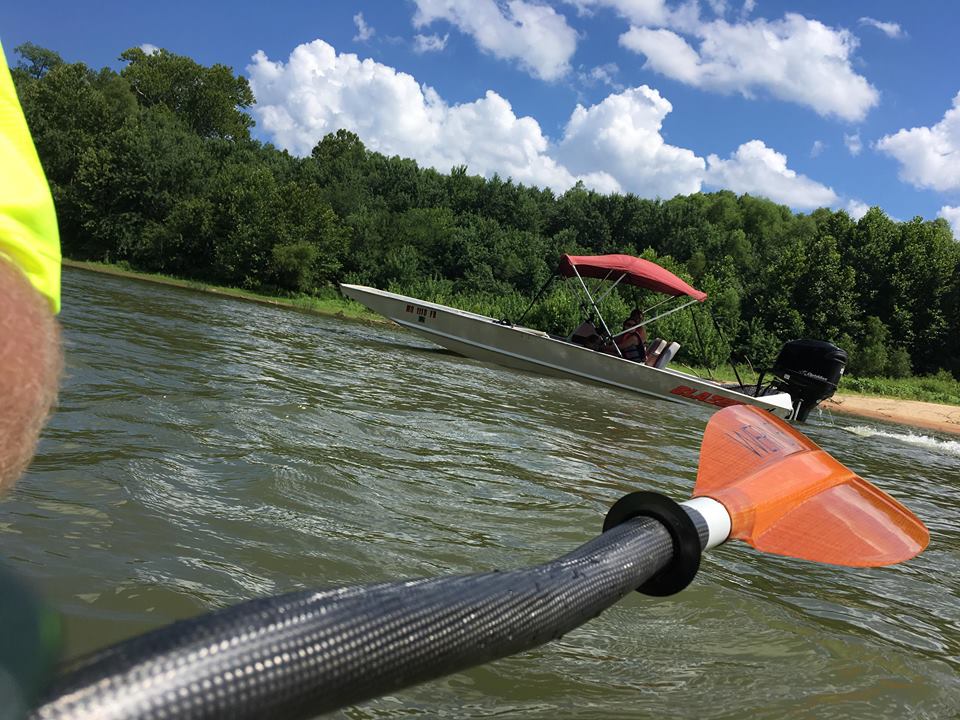 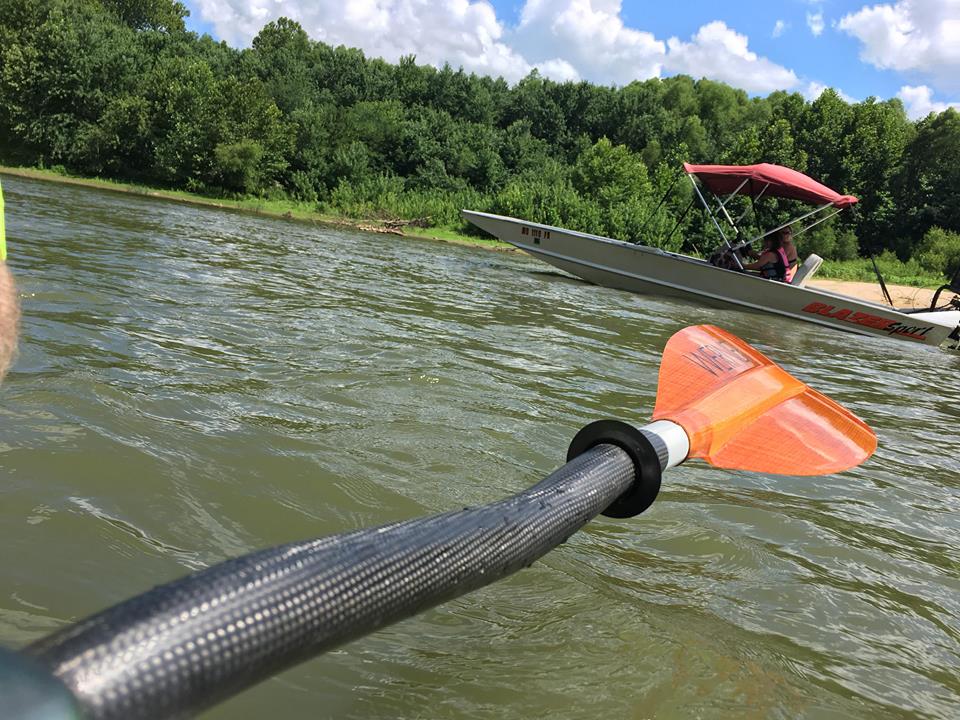 We had a terrifying 4ish mile final paddle back to the take out. Every motor boat that came from behind, we expected to be the motorboat jerk wanting more.

In the end, nobody got knocked out or injured. Heard that the Missouri Water Patrol said the numbers on the side of the boat for registration don’t match the boat in the photo. Sounds like a real winner to me.