Friday morning, I woke to the alarm on my phone. I was quick to get through my morning routine and be dressed to ride. We shared a continental breakfast at the hotel lobby and then had to figure out what to do. After flipping through the pamphlet, we decided to try out the “Jasper Disaster” route. The route is only 56 miles with 316 curves and it was supposed to take two hours. We thought we would start with a shorter ride and end up back where we started to do another one.

Part of the goal of doing a short ride and getting back to Harrison is because Hiatt’s face shield for his helmet was badly scratched. He was having trouble seeing out of it. He didn’t bring a replacement, so we had to find one. Luckily, there was a motorcycle shop next to the hotel we stayed at. So we figured after a nice easy 2 hour ride, they would be open for business.

We had decided to use radios so that we could talk to each other during the ride. I had my radio in my jacket pocket with the wires coming out of the zipped pocket like an angry octopus. The three wires then has to be plugged in to the corresponding two wires in my helmet and one on my bike. The two coming out of my helmet were for the microphone and headphones. The one attached to my handlebars was a push to talk button. We tried them the whole first day with little success. Ultimately, we would slow down to talk if necessary, because this system didn’t work!

Hiatt was in charge of the maps for the trip and therefore navigation. He has a tank bag with a clear plastic window in it, plus a GPS mounted on his bike. Between the two tools, we should never get lost. With confidence, we pointed our bikes South on highway 7 to start the route. It was a crisp morning just perfect for a ride. We let the miles pass without a care. We passed cars with ease and breathed in the scenery. Eventually, we rode through some fog, slowing down a bit to ensure our safety. The road quickly rose up back out of the fog and presented us with spectacular beauty. We were above the clouds/fog looking down into a valley. 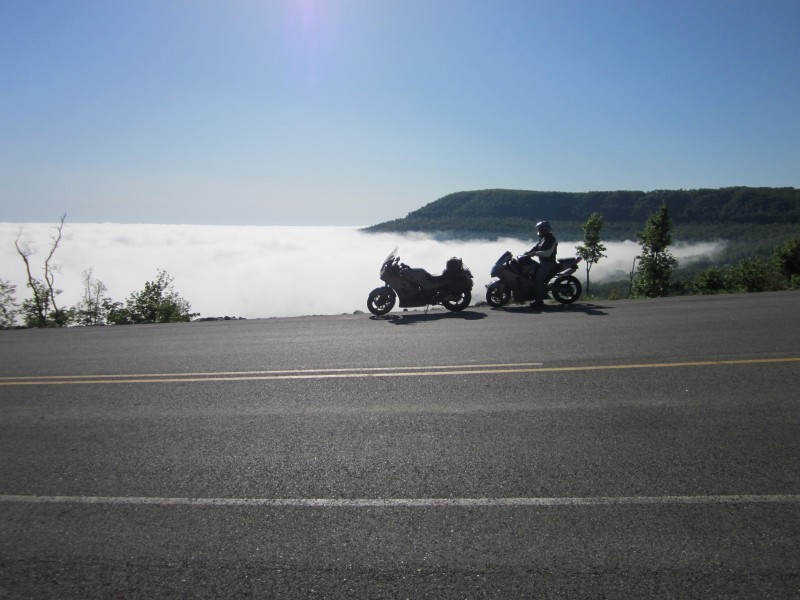 Just beyond our first scenic stop was a viewing tower to overlook the valley. Of course, we made the obligatory stop and climbed the tower to check out the scenery. It was hard to believe we would have scenery this good at the start of our trip. 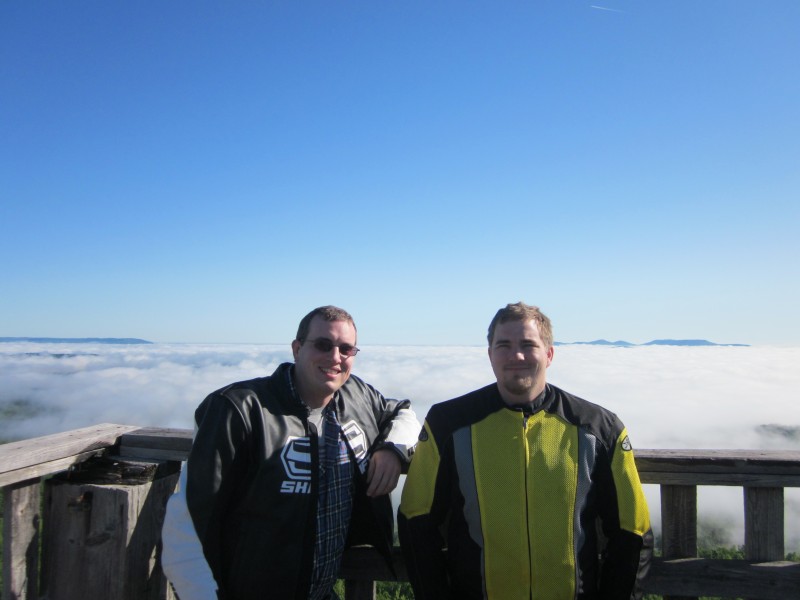 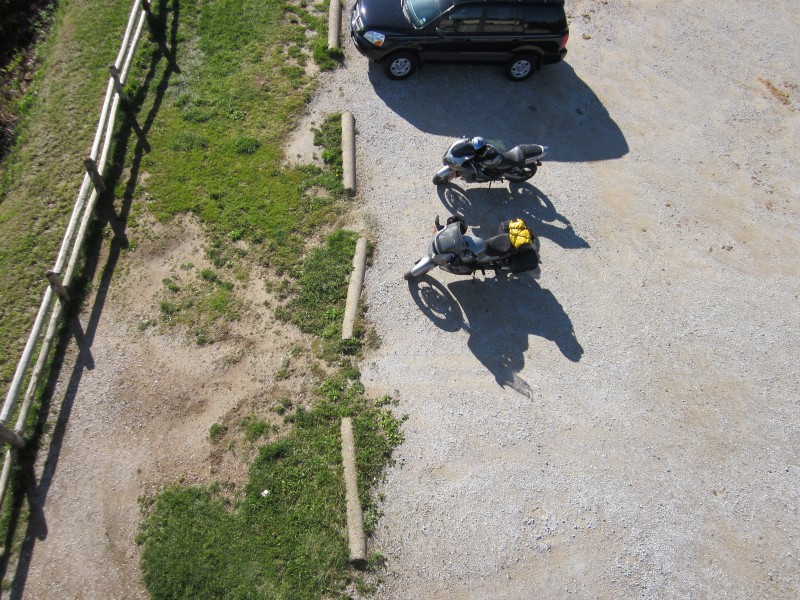 After getting our fill of the breathtaking view, we climbed down the tower and continued South on highway 7. After a while, I began to wonder when we would hit the town of Jasper [the namesake of the ride] and turn to complete the ride. We ended up pulling into a rest area along highway 7 to get our bearings and figure out where we were. Amazingly, this rest area was nearly as beautiful as the last stop we had made. 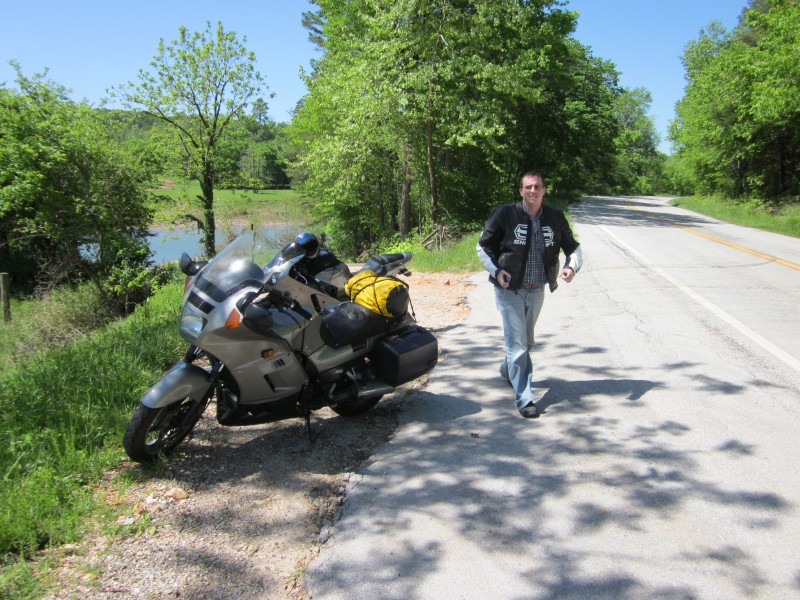 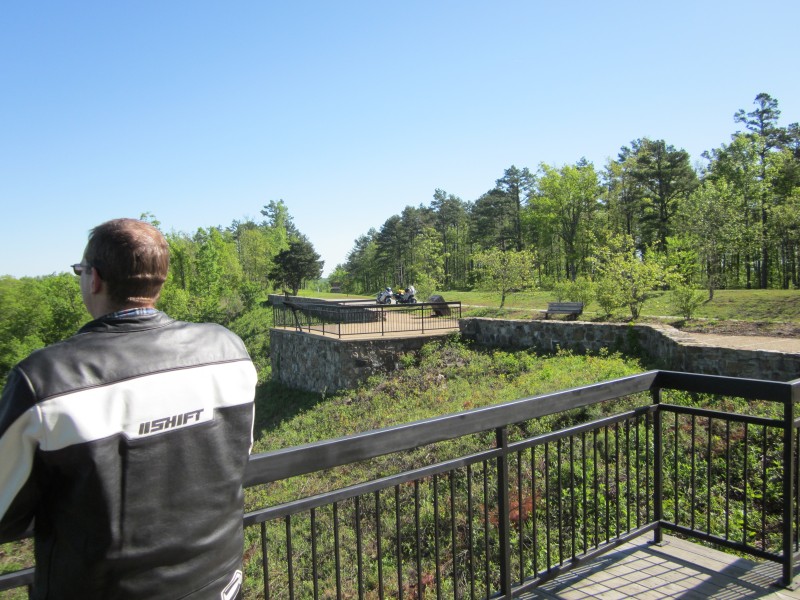 After turning on the GPS, we realized we were around 40 miles past Jasper where we were supposed to turn. Our best bet at this point was to go back North where we came from. Our goal was to get back to Harrison to get a new visor for Hiatt’s helmet. Off we went. This time, we were both quite aware of Jasper as we went through. There was a dog leg in the highway that announced the town. It was around the start of lunch time and we noticed a large amount of bikes parked outside of Pizza on the Square. Fortunately for us, we were not really hungry at this point.

Excited to be back in Harrison, and knowing where we were going, we rode directly to the motorcycle shop. After a quick glance around at new bikes, Hiatt went to the counter and asked if they carried the face shield he needed. As luck would have it, they didn’t even carry that brand of helmet. They kindly told us where the other two motorcycle shops were in town. With our thanks, we went out in search of the next cycle shop.

At the next shop, which I remember being a Honda shop, we were concerned we went to the right place. There were more trucks with lift kits and big mud tires then there were motorcycles. We didn’t expect much and weren’t surprised by the result of nothing. The third shop in town again provided us with nothing. At this point, we were beginning to get frustrated with the town of Harrison. It really isn’t a bad town, but our luck just wasn’t holding up. The Jasper Disaster route had felt like a disaster as we couldn’t stay on the route. Because we were having so much fun just riding, we made the decision to just go back the way we came. Back down highway 7 and see what we would see. The riding and scenery was amazing and we figured we would just get more of it.

Our adventure wouldn’t be complete without random stops to see the local scenery. As we raced past everything in sight, Hiatt flagged me to stop. We did one of numerous U-Turns for the trip and went back to see what he saw. There was a road leading down to the river next to the road. We decided it would be fun to walk down and check out the river. So we parked the bikes at the top of the side road and headed down to check out the river. After talking about how amazing it was to be next to the river and listening to it flow over the road, we both agreed that there would be no way that we could get our bikes across the river because the water was too high. However, I thought that maybe I could walk across just the same. With great fanfare, I took off my boots and socks and pulled my jeans up above my knees. Gingerly, I stepped out into the water. I forget that rivers in early may are NOT WARM! It was super cold, but I persisted a few more steps. I quickly decided that the algae covered road would quickly cause me to slip and get totally drenched. So I turned back for dry land. The crossing was not possible and I was sure of it now. 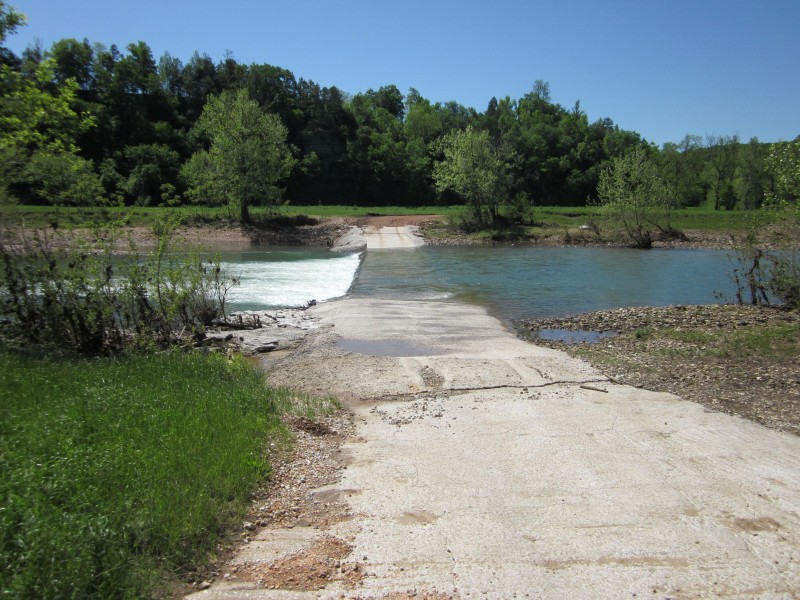 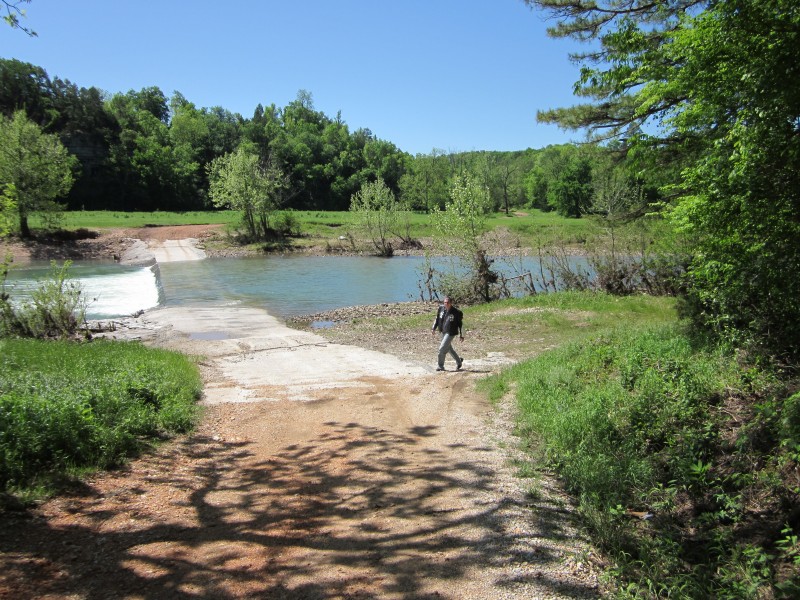 This time, we didn’t miss the town of Jasper and stopped at Pizza on the square for lunch. It was a very nice small town with an amazing pizza joint. The locals were quite friendly to us. In fact, we had a guy tell us the last three month’s worth of his life story. We just about had enough of him when he headed off on his bicycle. Of course, I did snap a photo of him to make us smile. 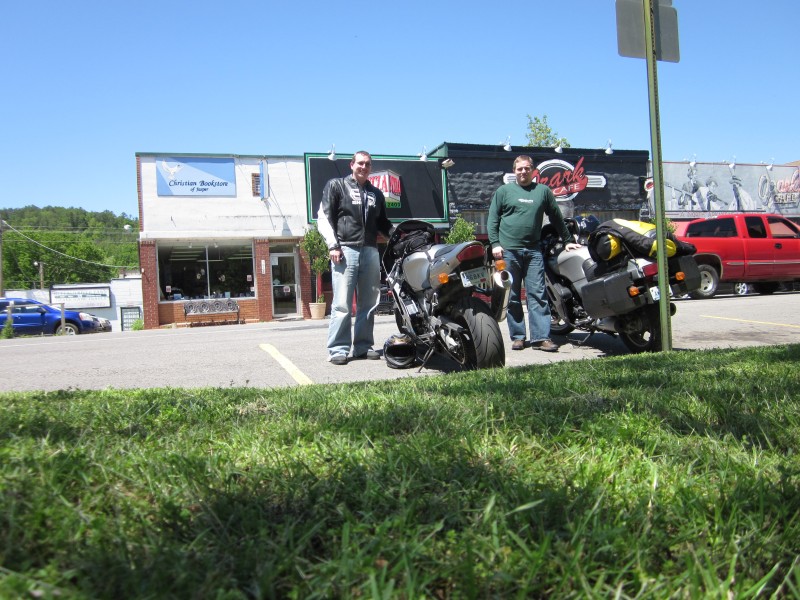 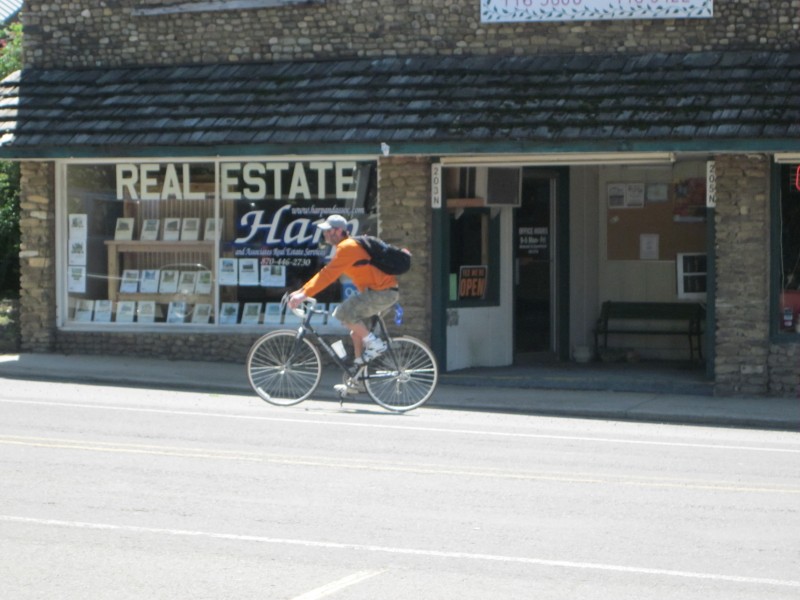 With nowhere in particular to go, we had to figure out what our destination was going to be. I remembered a past trip to Arkansas when we went to Mount Magazine, the highest point in the state. I remember there being switch backs and having an interesting time with the drive. So we decided to head there. During a fuel stop, we asked for general directions. Mt. Magazine is located outside of Paris, Arkansas. We found it without much issue going up one side and coming back down the other. While at the top, we stopped to enjoy the view and saw a hang glider quite a ways up in the air. 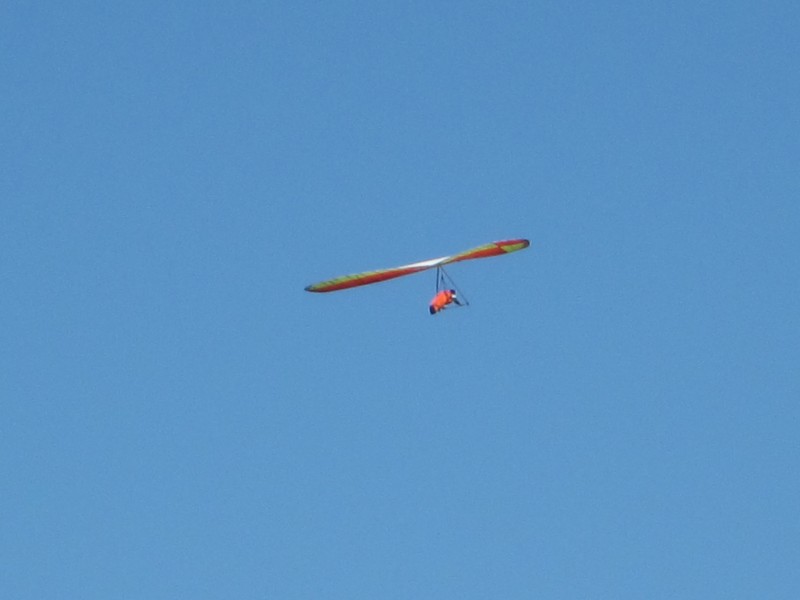 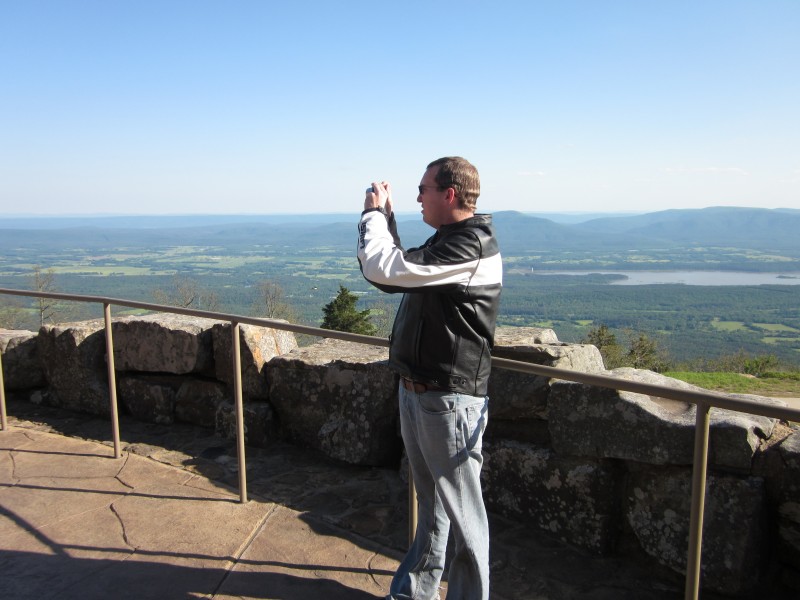 Back on the ground from the “mountain”, we had to figure out what we wanted to do for the night. I decided that I wanted to see Eureka Springs. I heard it was close and they were likely to have motorcycle shops there. We were still trying to figure out how to get Hiatt a new face shield. He did quite a bit of riding with the shield up and hoping his glasses would do a good enough job of keeping the bugs out of his eyes.

Eureka Springs turns out to be a bit farther than we both expected. Our goal was to be relaxed on this trip and to not ride at night, avoiding unseen animals. Unfortunately for us, the last 90 minutes of our ride was in darkness. We were now going so slow (partially due to Hiatt’s face shield issue) that cars were passing us. While this is slightly embarrassing, it is best for our safety. In Eureka Springs, we found a hotel with a decent price and motorcycles parked in front. This is always a good sign as far as we’re concerned. During check in, I was being goofy and flirted with the front desk lady a bit too much… Something about I’m old enough to be your mother and all.

In our room, we were quite ready for food. Unfortunately, every place we called was closed or didn’t deliver. So we ended up back at the front desk asking if there were any food places. We were sent off in the correct direction with no sidewalks and a decent sized highway to cross. I may have already started in on the Southern Comfort, so I was feeling a bit like Froggert. Just a half mile down the road was the Pizza Hut that wouldn’t deliver to us. We ordered a pizza and waited while it cooked. I may have done it again and upset a waitress, but I think she was in a bad mood before we showed up.

With pizza in hand, we hit the liquor store on the way back and got a Mickey for Hiatt while I would persist with the Southern Comfort. Once back in the room, we ate the greasy pizza with gusto and went right to sleep! 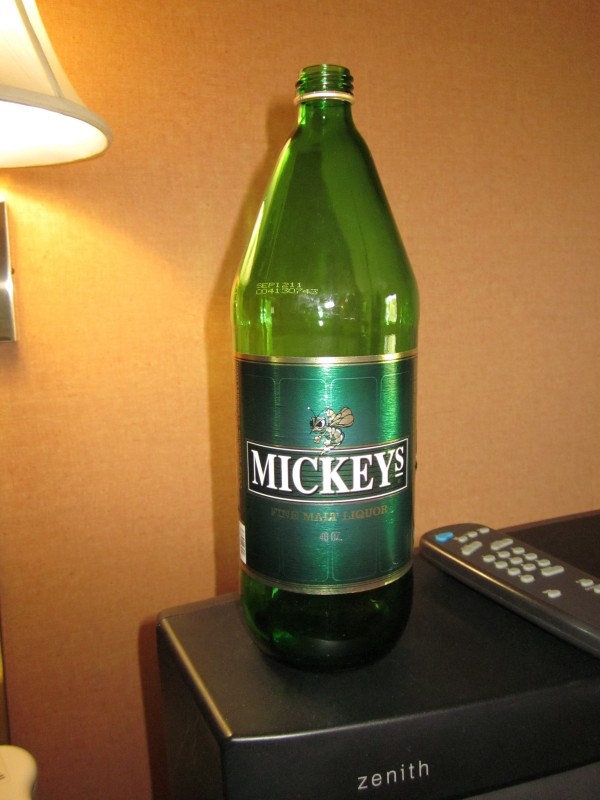