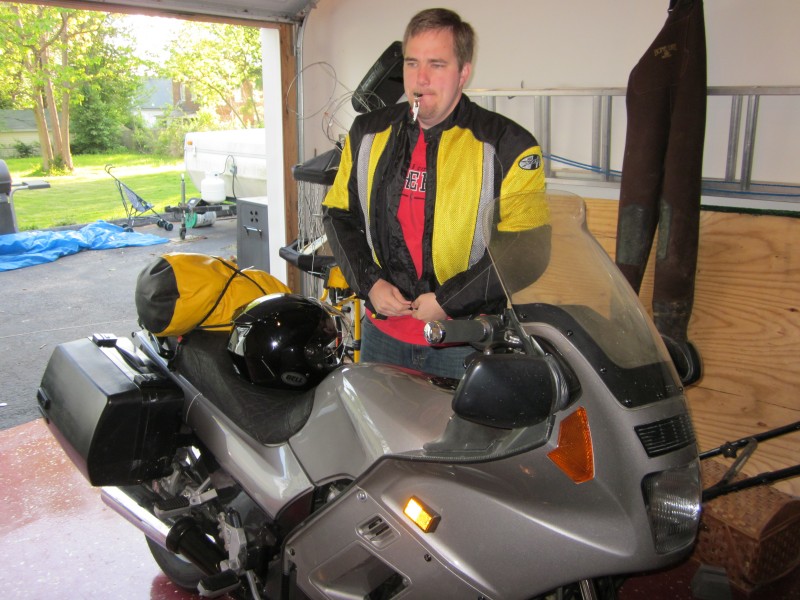 Its Thursday, May 5th and my bags are packed. I kissed the wife and kids goodbye and took off for work. This was going to feel like a long day even though I planned on sneaking out of the office around 3:00pm. The plan was to meet my brother, Hiatt, at a Braums restaurant in Nixa Missouri. Hiatt is coming from Kansas City for this trip. Our initial thought was to meet in Columbia and ride together, but by going straight to Springfield, we would save a few hours of travel. 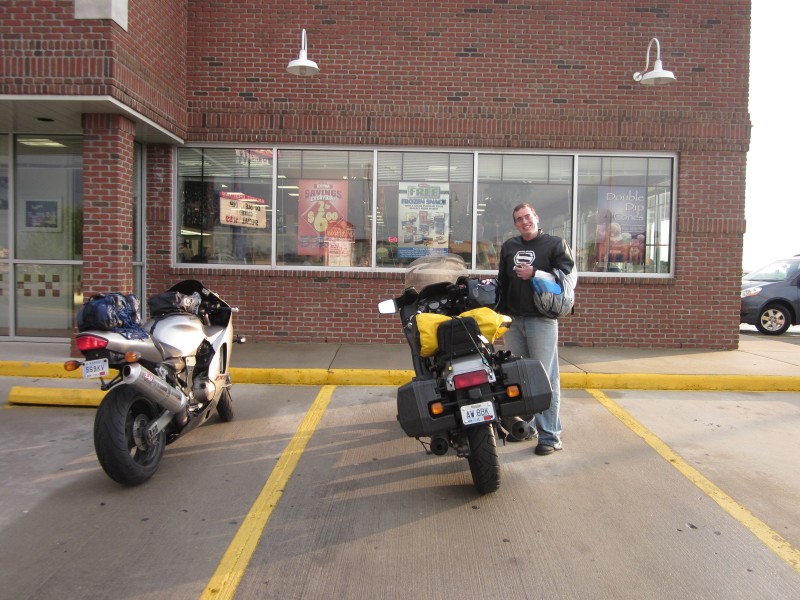 I got out of the office just as I planned around 3:00pm with the blessing of my boss. I placed the bag on my bike securely fastened it down with bungee cords. The weather looked like it could rain, but I wasn’t worried. Off down the highway I went. As I went South, the clouds let me know that I was in for a treat. My goal was to get about an hour down the highway. Cuba Missouri was my destination. They have a large truck stop that has several memories for me. Mainly, they are known for cheap gas and HUGE signs on the highway that won’t let you forget. Secondly, this is the truck stop where I traded my previous motorcycle for the bike I was riding now. I have been through several repairs and a complete motor and transmission replacement to get to this point. It was going to feel good.

Mother Nature didn’t want me to get to the truck stop dry. It was a race against her and the highway mile marker signs. Ultimately, I pulled into the fuel pump with a few sprinkles, knowing I was in for something more. I placed my helmet on the seat and started to walk around the bike to get to the fuel pump. This was when I got the first hint at what was in store for me. A quick breeze at the front of the storm tore across the truck stop knocking my nearly new helmet down and over several feet. This was stupid and embarrassing as there were two other riders there to witness my mistake. As I retrieved the helmet, I noticed their helmets on the high handlebar leaning in against the bike, using gravity to hold it in place. I have since used this technique to keep my helmet from being knocked over by wind or people with complete success.

I took a break from riding and walked in the truck stop to relieve myself and just relax. Back outside after the break, the rain had started and the front was still not through. I was going to get to test my new rain suit for the first time. It is a Tourmaster Elite II. The rain suit is one piece, so it took me some time to get it on and situated correctly. Once the suit was on and I had my helmet and rain gloves on, I realized that I could not get my keys out of my pocket. So I had to undress quite a ways to get at my pocket and get the key out. Key in hand, I put my gear back on and mounted up. Into the rain.

For the next twenty minutes or so, I was pushed around in the rain by the wind. I had to keep my speed about 10 mph lower than the speed limit to keep the bike in my lane and on the highway. The rain suit kept me very dry and happy. The gloves were indeed waterproof and kept my hands dry as well. At speed, the water beaded off the face shield and I had no issues with visibility. Occasionally a drop of rain would come in the vents of the helmet and get my forehead wet. Two more hours heading South and through one very slow construction zone, but I was making progress. As I approached Springfield, I noticed that the sky was clearing quickly. By the time that I turned into the Braums parking lot, the sky was mostly clear, but the ground was still damp. Hiatt was there waiting for me to pull up. Ohh, and Hiatt came from Kansas City and completely missed the rain! Lucky dude. 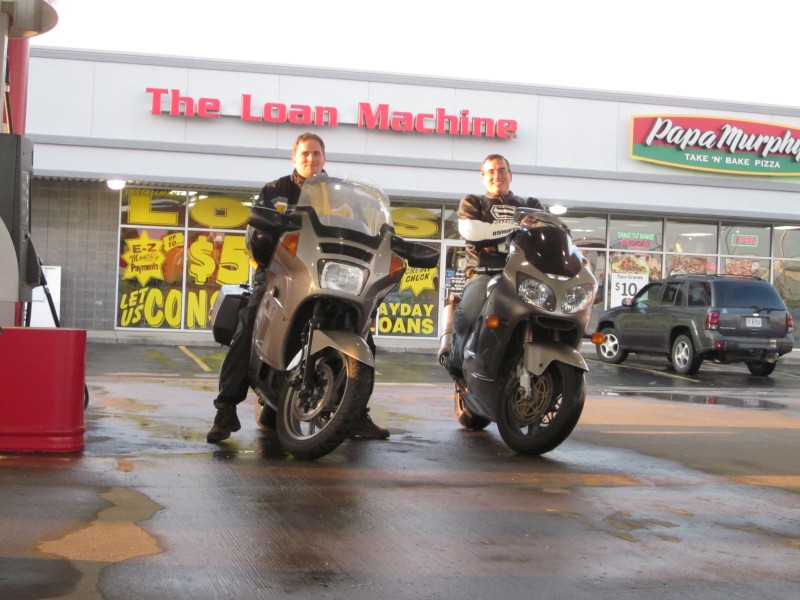 Once we were settled at Braums, I struggled to pull the rain suit down. With my jacket on beneath it, there wasn’t much room to move. I had a little water seep in through the zipper, but I believe I could have ridden another 4 hours in the rain before I became uncomfortable. After a pleasant dinner and catching up, we were excited to hit the road. We wanted to make it to Harrison, AR that night and find a place to stay. Harrison is only a little over an hour away. Harrison Arkansas also mailed me a great brochure (www.MotorcycleArkansas.com) that had several rides based out of Harrison. That made it an easy choice to stop at.

We arrived at dusk and found a Comfort Inn on the outskirts of town that had great rates. Once settled, Hiatt and I switched motorcycles and headed out to find some snacks and drinks. Because Harrison is in a dry county, we needed Coke to go with the bottle of Southern Comfort we brought with us. We found the Wal-Mart on Walmart Drive road… Once safely parked in the lot, we both swore that our bike was better! Each of our motorcycles is a different style and we have learned to love what we have. That is a good thing!

Settled back into the hotel, we both unpacked, had drinks and relaxed. I worked on drying my rain gloves should I need them again during our ride. We talked about where we wanted to ride on Friday and what our ultimate goals were. We were anxious, but completely free from a single care in the world. Tomorrow, we would ride off and have a blast! Nothing could stop our fun or adventure. 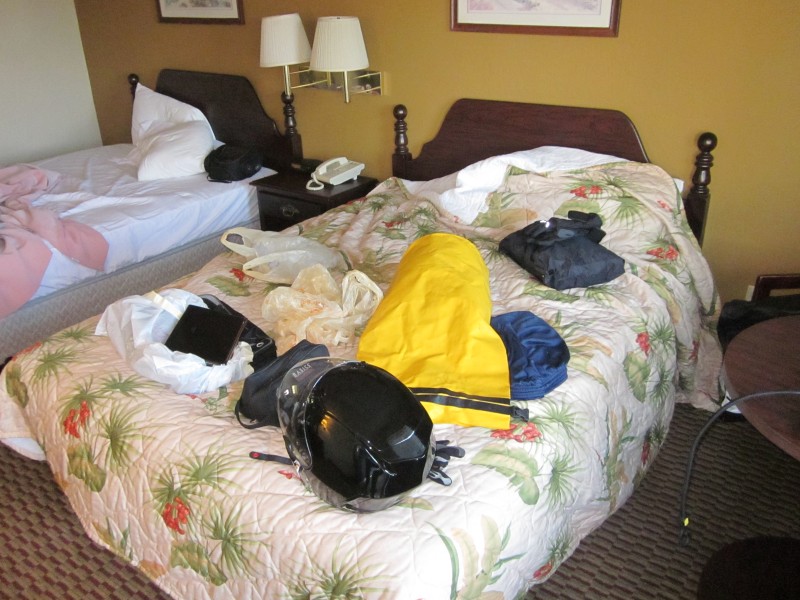