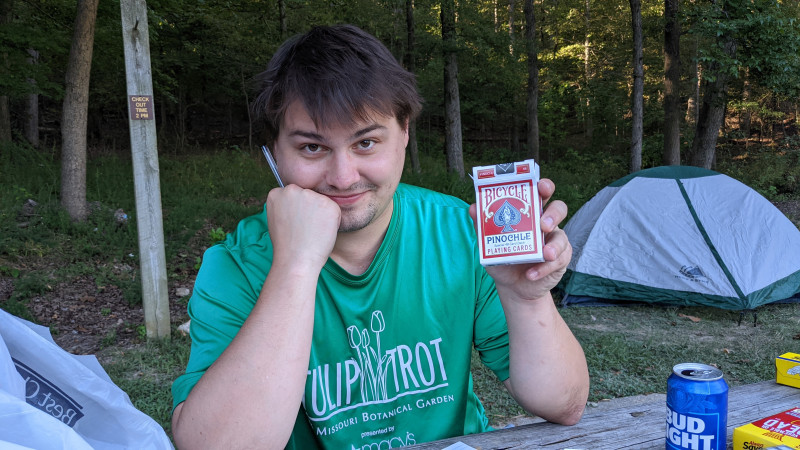 An annual event put on by Adventure Riders LLC, Adventure Palooza is a 500 mile off road adventure based in the state of Missouri. This is my second year participating. This year, I invited Brad Pagel to join me on this grand adventure. He accepted and I also tried to join up with my group from the previous year. Joe and Kevin were interested, but Kevin ended up with conflicts and Joe’s bike was still in the shop. So it was just Brad and I set out to adventure.

Just before leaving home, the bike is almost fully packed. Missing my tank bag and probably a bunch of other stuff. 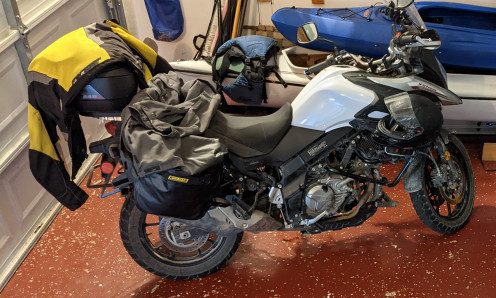 Brad just before setting off. 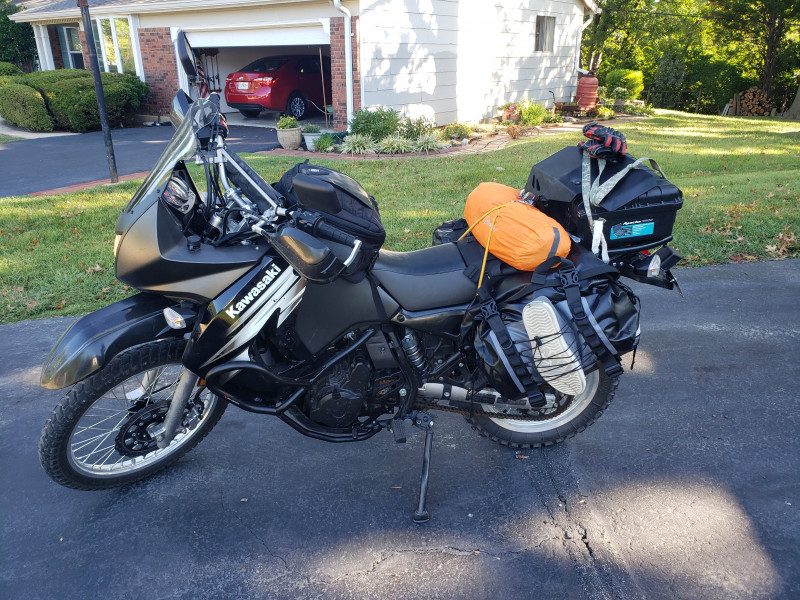 We started late Thursday morning on a leisurely ride south to the start of the event. I had a campsite reserved for the first night. We arrived in the mid afternoon after a great leisurely ride. Brad and I went to setting up camp and getting settled in. 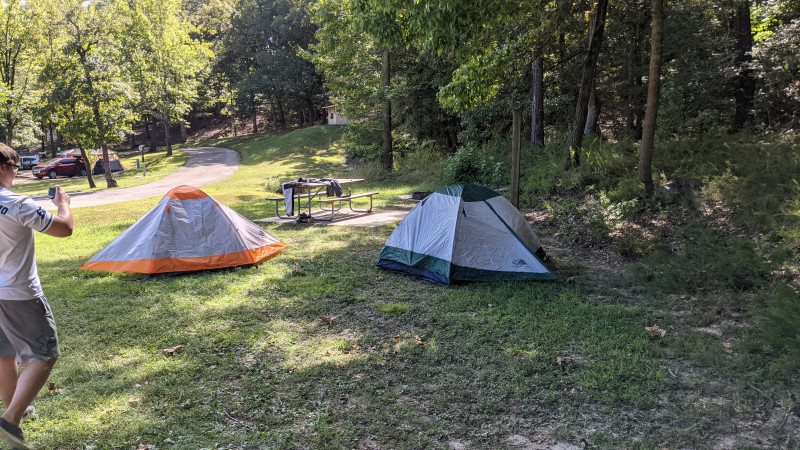 We chatted with other campers as most of the campers were also riders for the event. There was some talk of going into town for food. However, we started talking and decided we would cook at the campsite. We fired up the GPS and emptied our saddle bags and headed to the nearest grocery store for some food. It was a comical shopping trip, but it all fit in the motorcycles and we were off headed back to the campsite. With some beer and a deck of cards, we would hang out playing till it was time to cook. Unfortunately in hour haste to get playing cards, Brad got Pinochle cards instead of a regular deck and our entertainment was thwarted. 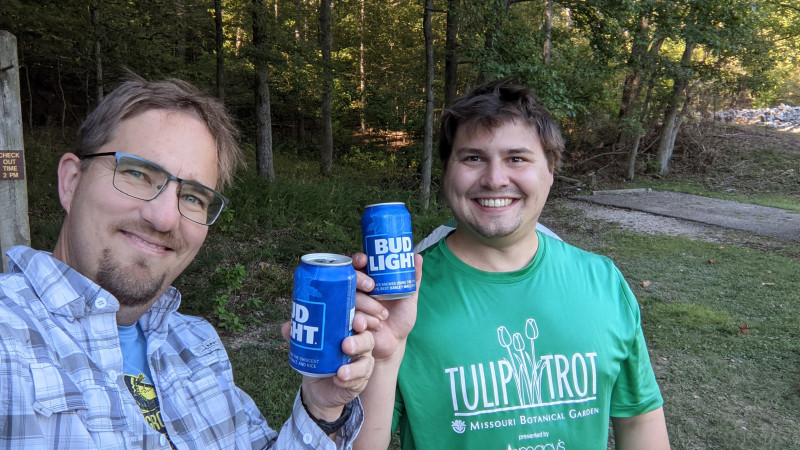 We entertained ourselves until it was time for dinner. In typical bachelor manor, we didn’t have much so it was nearly all disposable/creative use time. We started with Brad making plates out of aluminum foil. We had lots of the stuff, we we went deluxe with two ply plates 🙂 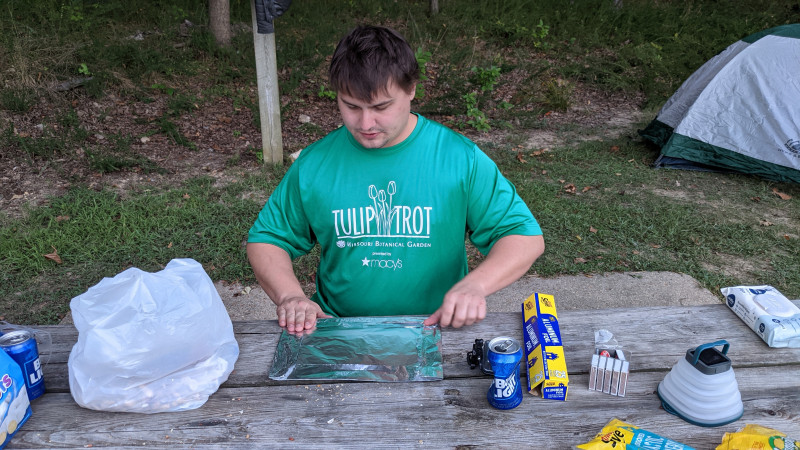 We threw our steaks and foil wrapped potatoes on the almost adequate match light briquets from the store. Now we just had to wait before we could eat. 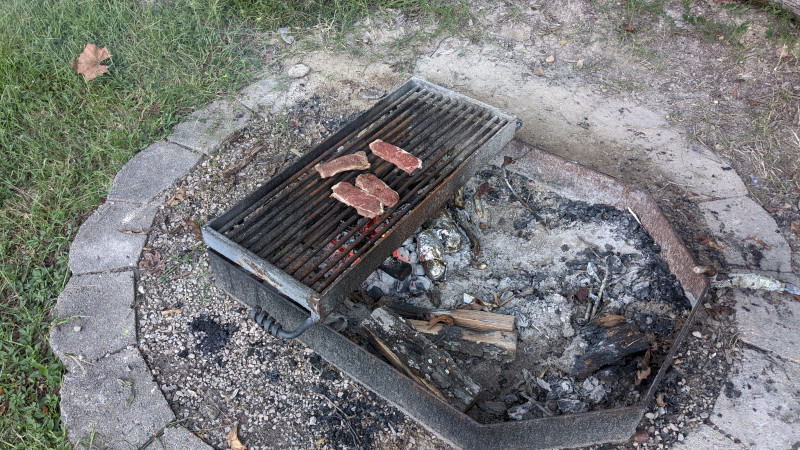 Properly fed, it didn’t take long to get dark. I told Brad we would get up at 5am so we could be on the road at 6am riding. He thought I was nuts, but deferred to my experience. The night sky was amazingly dark at Lake Wappapello State Park and we didn’t complain.

Morning came fast. The alarm went off and we started packing fast. Even with some organizing the night before, it still took an amazing hour to pack up camp and get on the road. I think that the 1 hour is actual some sort of universal law that no campsite can be packed up faster than 1 hour no matter how prepared you are. Any way, we made our way to a gas station for some coffee to help perk ourselves up. Being in a small town, it wasn’t a mega gas station, so we looked at the huge tanks of bait while we waited for the coffee to brew.

Fueled, we were on our way following the tracks to the start of the ride. The ride has many checkpoints along the way. The previous year, we attempted to complete all the checkpoints.While it was interesting, just riding often is enough. The tracks are long enough, that you really have to keep moving all day to finish on time! Brad thought I was nuts that I said we would need to ride from 6am to 8pm, I would make a believer out of him yet!

Ignoring the groups of riders that were organizing for each of the checkpoints, we started just going about our own ride. We rode all morning going over and seemingly through the forest. Exhausted, we stopped for lunch at a McDonalds for rest as well as food. After lunch, things got really difficult. I struggle to describe all of the difficult track we went through. But at one point, there was about a 1/4 mile section that was small to medium size rocks and all uphill. These are very difficult to get traction on. When encountered, its best to get some speed and just push your way through it. I wish there was video of me going through this section. I put my legs out for support and just went slightly above an idle speed in first gear. The bike thrashed about under me as I occasionally walked it to help maintain my balance. I did end up stopping one time, but was fortunately able to start back up and get momentum to get me all the way to the top of this road. These types of road take talent (or tons of luck in my case) to ride up successfully. My motorcycle, a V-Strom 650, is not known for its off road capabilities. It sits too low to the ground causing it to bottom out easily.

Lots of places along the ride, there are random things to see depending on how tired or adventurous you are. This short stop was a combination of both! 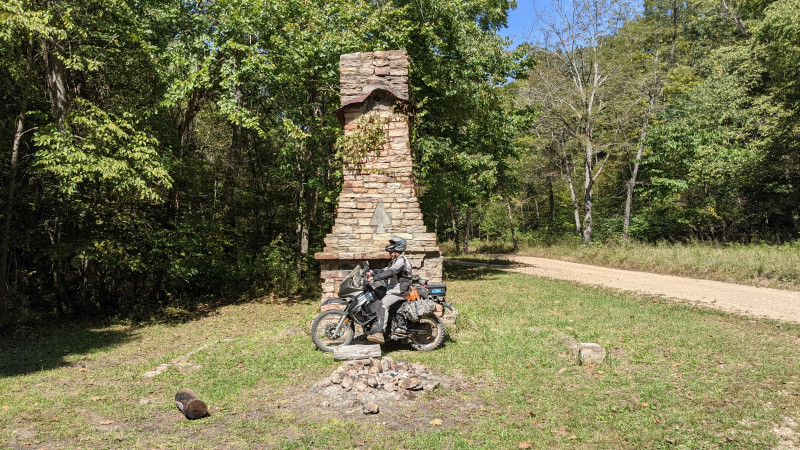 Eventually we went through some more interesting roads that I question if they were open to riders or not, but I was following the path. We ended up at the top of a road that went down with the HUGE power lines that run between hills. This looked hard and difficult. I bet it took Brad and I close to an hour to get through this section. It was a lot of stop and regroup, then go in terror. The video at the end shows a few parts of that terrible hill. I’m fortunate to say I didn’t drop by bike (but Brad might have).

When we stopped for dinner at the Bixby Country Store we picked up fuel, food, and conversation from fellow riders. Turns out a group of riders on more capable motorcycles that we were on skipped the power line road in the video below. They said that after the uphill road with rocks that I mentioned, they were spent and didn’t want to ride any harder stuff. I felt great about our status after that. On lesser bikes doing the whole route and getting there at the same time. Doesn’t mean we’re better riders, just stubborn and sticking to our schedule.

At this point, we had about 60 miles left in the day’s ride and the day was getting short. We were going to be putting up camp in the dark based on my estimates. We took off following the tracks doing our best to cover every inch of it that we could. We ended up in a big field slightly confused. Brad navigated us through the woods and back on the trail. We were on a road that looks like it hadn’t been used in years. We slowly went down taking our time and getting our lines just right.

But that was when my luck ran out. The road was shaped in a U where the sides where high, but the middle was low. You have to cross from side to side depending on the terrain to keep going. I crossed to the left side, but lost a bit of control. I went to put my right foot down, but the ground (due to the U) was about a foot lower than my tires. By the time my foot hit the ground, the motorcycle was almost on top of me. I got 90% clear of the bike but wasn’t hurt. However, my rear view mirror is mounted the the same control as my front brake. When it hit, it broke the mount. Now I had a semi-broken motorcycle.

Brad and I  both agreed it was time to call it a ride and limp home as my bike wasn’t safe  in the woods anymore. See the broken metal on the image below. This holds on my front brake which is very necessary for safety. 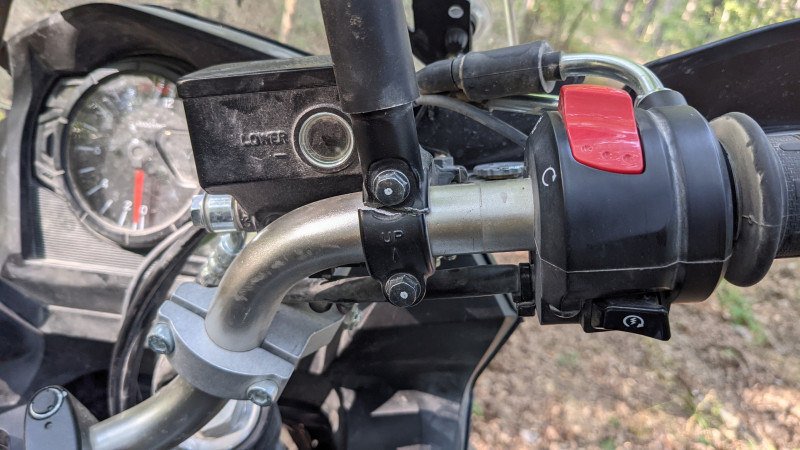 The ride out had a long detour due to a closed gate. We eventually made it home after a 2 hour ride on highways. We were safe and had great memories from the ride.