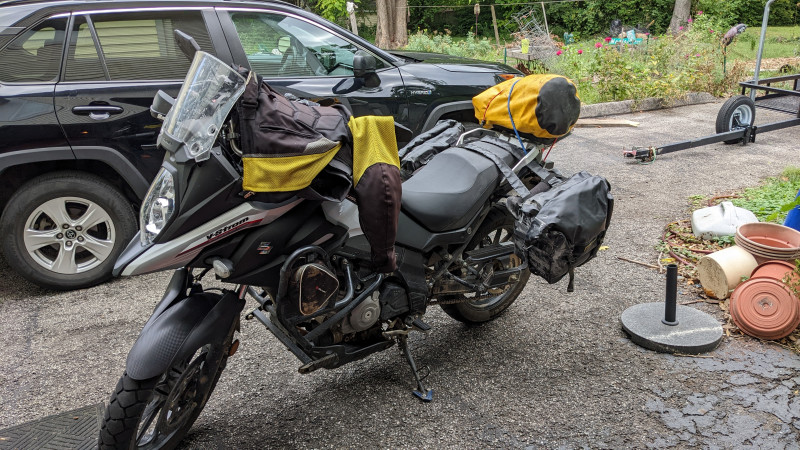 This is my 3rd year participating in Adventure Palooza. I completed my first year, broke down my second year and was looking to finish this year. I’ve made minor updates to my V-Strom 650 to prepare it and protect it from falls that could end my ride early. I expected to have some minor falls. I was supposed to ride with Brad and Joe, but Joe got COVID just before the ride. It would just be Brad and I as a team for this year again.

Brad didn’t have enough vacation to take Thursday and Friday off work. The plan was me riding down to the start on Thursday. Brad would load his motorcycle on his truck and his dad would drive him down in the dark, then drive home that night. That was fine with me. I would take a long winding route down on Thursday and meet Brad that night.

This is my bike Thursday morning packed just before I left for the trip.

I’ve likely said this before, but I’m always a little nervous leaving for a trip. Getting the transition from home to road takes me a bit as I work out my second guessing myself. To ease into this transition, I took Manchester out east from home all the way to downtown. There I started by riding next to the graffiti wall. 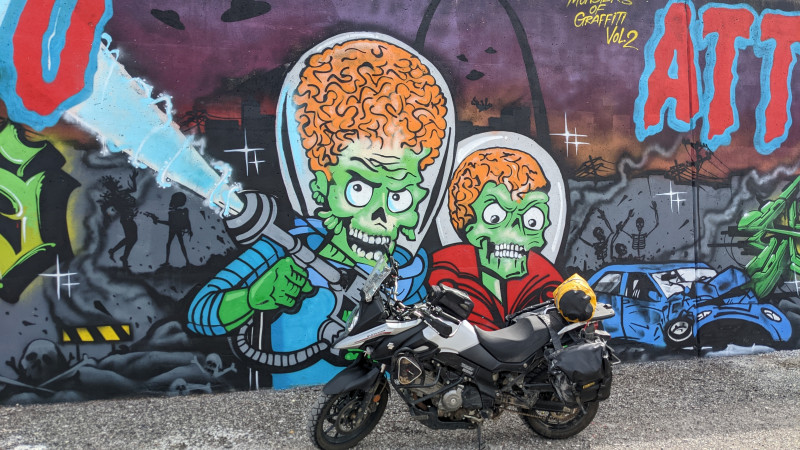 With that relaxing stop out of the way, I continued across the river to to Illinois. This is already riding the long way to the starting location of Van Buren, MO. But I was looking for and adventure. Rather than taking route 3 south, I zigged and zagged until I found the earliest point I could find of getting onto the levy where it starts near I-255 South.

There were signs that indicated that I probably shouldn’t be on the levy, but I continued on. Eventually I got to a sign that seemed serious enough, that I went out to the road. I believe it was about being government park property around Fort de Chartes state historical site. I got back on the levy after that again and continued on. Very shortly after, Prairie de Roucher Creek is there and the levy road goes back to Bluff road. There are still sites to see on Bluff road. I stopped at a mine to check out the blocked off cave.

Looking from the entrance back to my bike. 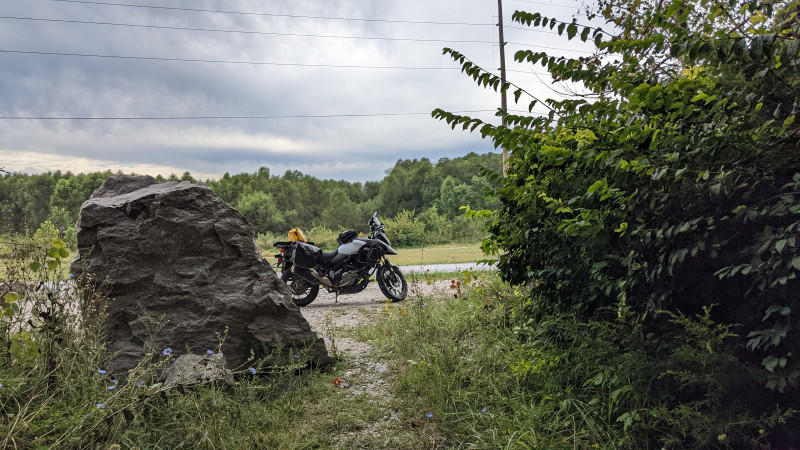 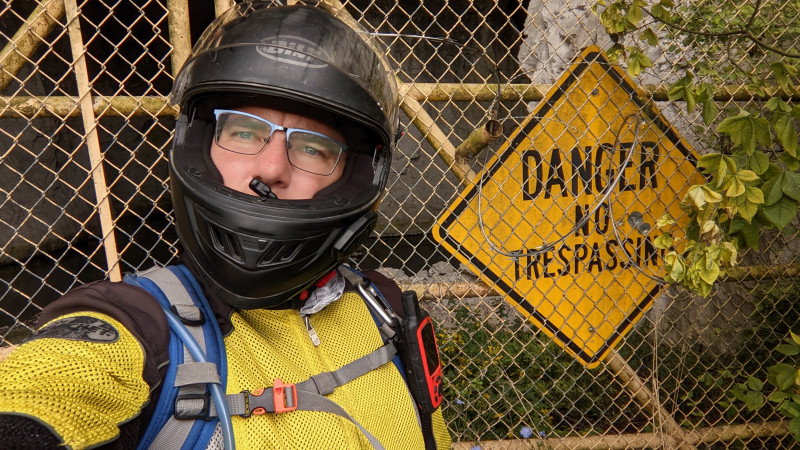 From here, I rode to Chester, Illinois where I knew there was a bridge crossing back into Missouri. I was far enough south now, it was time to start generally heading to my destination for the night. But first, it was time to explore the riverfront of Chester. I diverted until I found the boat ramp and decided to stop and walk for a little bit. There, I met a group of Viet Nam vets that were meeting up. I became their photographer, holding 3 cell phones at the same time to document their group. I didn’t mind and was happy to chat with them. I had to get my own photos as well. Okay, this photo was up higher by the bridge crossing over, but still awesome. 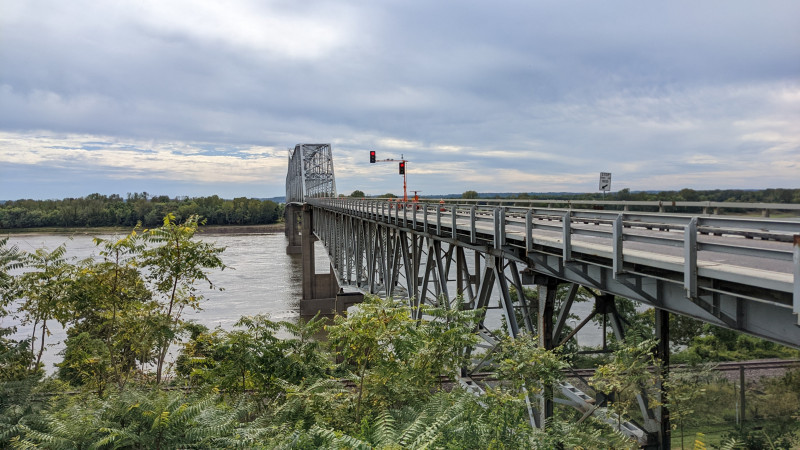 The rest of the ride to the starting hotel was mostly normal. I did have to backtrack when a bridge was closed adding about 45 minutes to my ride when I was ready to be done. At the first hotel, I checked in and unpacked my gear. Parked, I went out to inspect all of the other motorcycles that were parked at the hotel. I found a pair of V-Stroms there with knobby tires. They had taken them on a BDR recently. I also found a pair of guys from Tulsa, Oklahoma to chat with. Eventually, I joined the Oklahoma guys and walked to dinner a few blocks away at a Mexican restaurant. We had a nice dinner with great conversation. After dinner, we walked down to the Current river and checked out the view before going back. Brad showed up around 9pm and we got him promptly unloaded from the truck. I gave his dad simple directions to get home and we called it a night.

In the morning, Brad and I joined the two guys from Oklahoma. Sorry I don’t remember both of your names months later. There were a father-in-law and son-in-law duo. The younger one, Jake, on a Tenere 700 rode like a demon and none of us could keep up with him. The elder (who I’ll call Phil unless I remember his name) on a BMW GS 1200 and was more my speed.  We set out on the track of the ride. We each had working navigation, so we were a very loose group functioning semi-autonomously.

We made this stop at an old bunk house in the middle of the forest to stretch our legs. 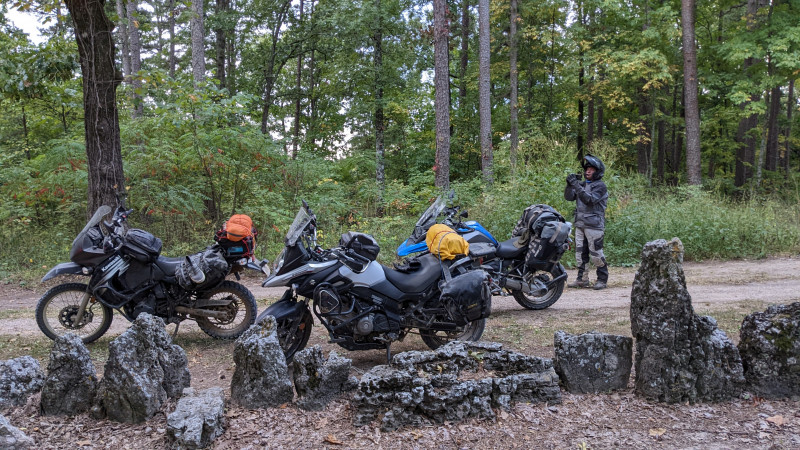 It lasted well, but I sure can’t imagine living here! 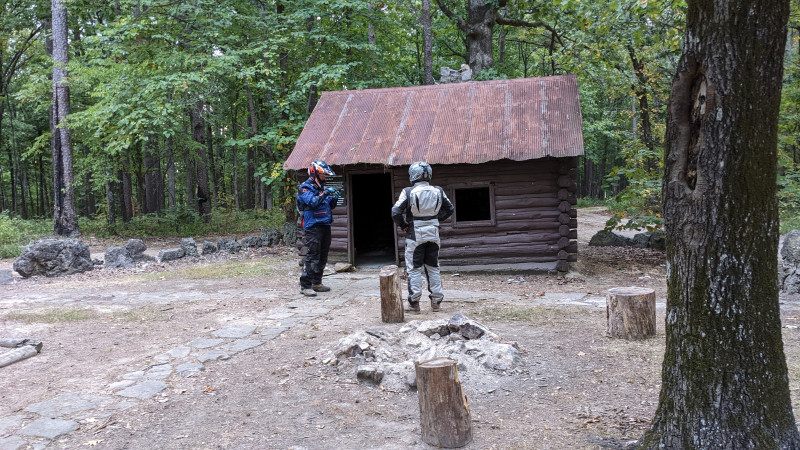 I certainly felt like the weakest link in the riding group. It didn’t take long for me to hit a decent bump and not let go of the throttle before getting into a stupid position. At least I was mostly stopped for this! I almost got turned 180 during this mishap. Unfortunately, this would happen at least 2 more times during this trip. No damage beyond my ego! 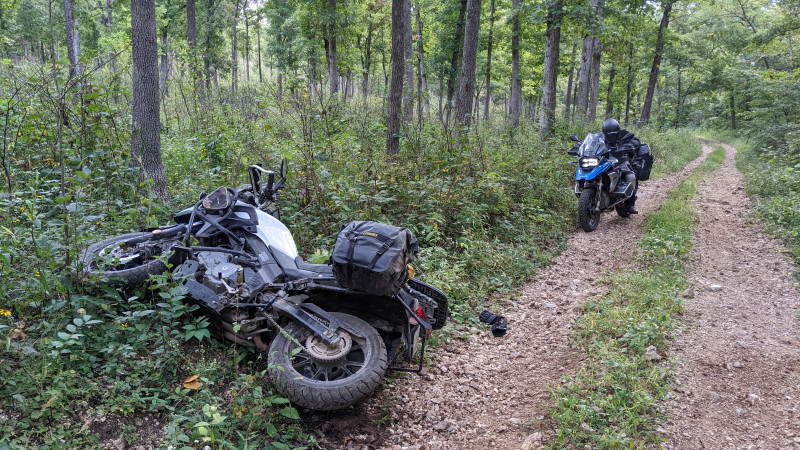 Our track took us to a fork where there was a difficult section. Brad and Jake went ahead to check it out. They said we should walk over as there was a deep water crossing we would have to go through and come back on. So we parked and walked over. Once there, a large hill climb presented itself. I wasn’t excited to go up this. Even worse, it turns out that it was an up and back and the trail didn’t need this uphill! Check out the video below to see them ride. And of course, the video/photo never makes it look as steep as it actually is.

Brad and Jake both made it up and back down, as seen in the video below. From there we parted ways for a bit. They went on the advanced track and we took the simpler work around for larger bikes. When we did meet back up again, they said, it would have been nearly impossible for us to get our bikes (probably with our skills) through the place they went. Brad had a minor spill from his bike on a particularly difficult section. Hearing this, I was quite glad that I took the simpler way.

The last gas station before we stopped for the night was a perfect place to get much needed supplies. Mostly that meant food and beer. 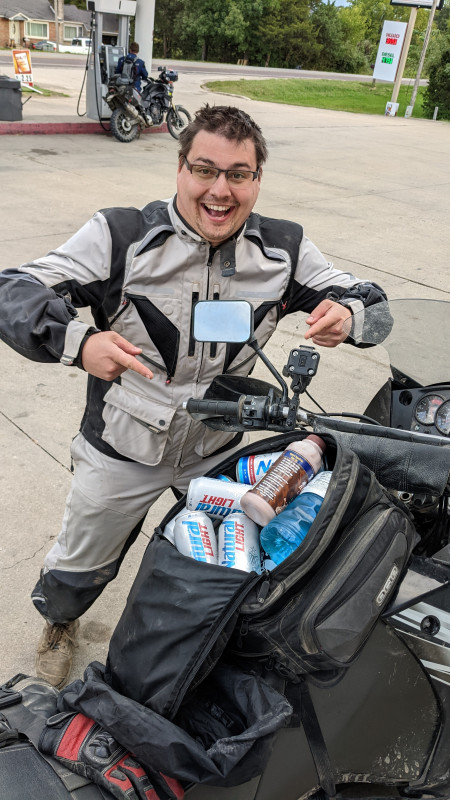 I managed to strap a 12 pack on the tail. Surprisingly, it drastically changed the balance of my bike and I was super nervous the rest of the ride that night getting to camp. 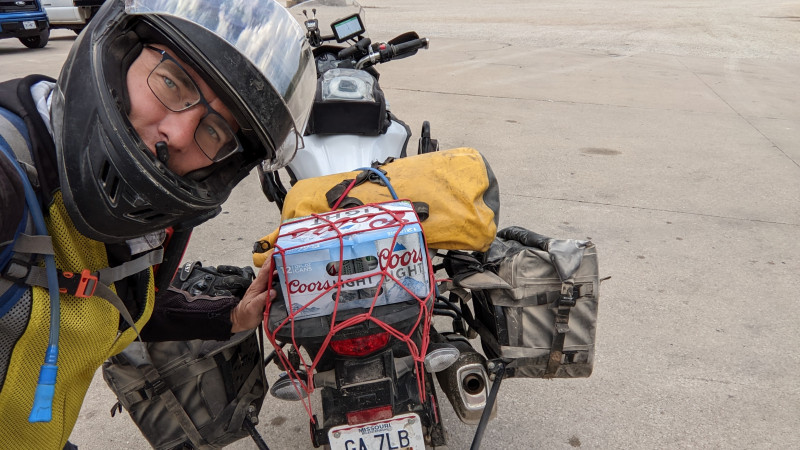 The campsite turned out to be a farm house with a nice fenced in yard. There were probably 50 people camping in the yard. I drank a beer and turned in early to get rest. I had a rough day of riding and wanted to be as ready as possible for the next day. Okay, also I had received a text that my dad was in the hospital and not doing well. Another reason that I probably turned in early.

Day to, Jake woke up early and went out to get some points for his team. The rest of us continued packing up and waiting for Jake’s return. He’s fast and didn’t take too long. Once back, we had another tough day of riding. Several incidents stick out on this day. The first is a navigation error that had me turn just a bit too soon. I thought I was on the road, but turned into somebody’s private property. Once I realized it, I started turning around. Phil was behind and saw me signal a turn around. About that time, a woman came out on the porch of the house and started yelling at us as we were already trying to leave. Her husband came out hopped on a 4 wheeler driving straight at us. I managed to turn around. Phil ran his 1200 off the gravel of their driveway and tried to go back on, but with the nerves of the situation ended up tipping over with the bike more than half way over. I had to park my bike and help him get his back up so he could leave. All the while they were yelling at us. Once we left, they slammed their front yard gate. I’m sure it doesn’t help that lots of motorcycles were going up the road next to their house like maniacs.

Just after we crossed the Missouri river through Jefferson City, we started heading East along the river on gravel roads. Again Brad and Jake took off quickly. Phil and I went at least 30% slower keeping it safe. Eventually we came up to two farmers. They were parked going opposite directions talking in their windows completely blocking the road. It was extremely rude of them, so we had to detour into one of the fields (crushing some crops) and then back onto the road. I made the detour just fine, but Phil tipped his huge bike over getting back onto the road. One farmer got out plus me to get him tipped back over and on the road again. So much easier if they had just moved to begin with.

Now we got to the bridge of doom. Brad and Jake waited for us, but Phil would have none of it and was taking the simple work around. I went ahead and crossed (had done it previously in 2021). I found out after I crossed that Brad’s back tire fell off the plank after his front had crossed. Luckily he had enough momentum to get across without issue. 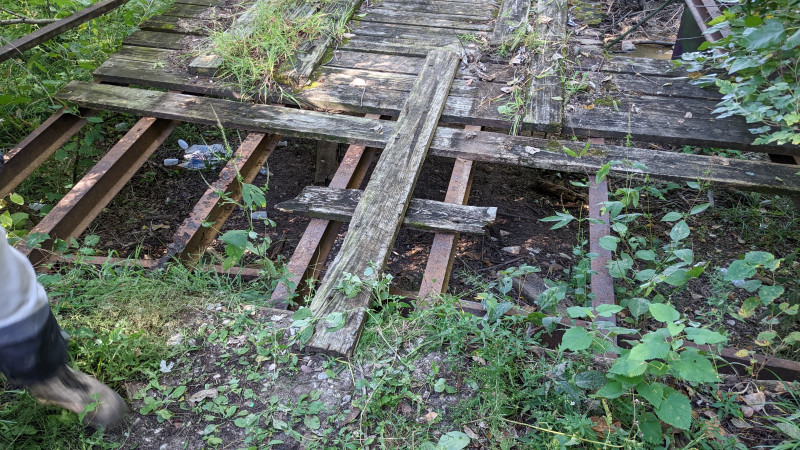 None of this bridge is a picnic, but it is an adventure ride 🙂 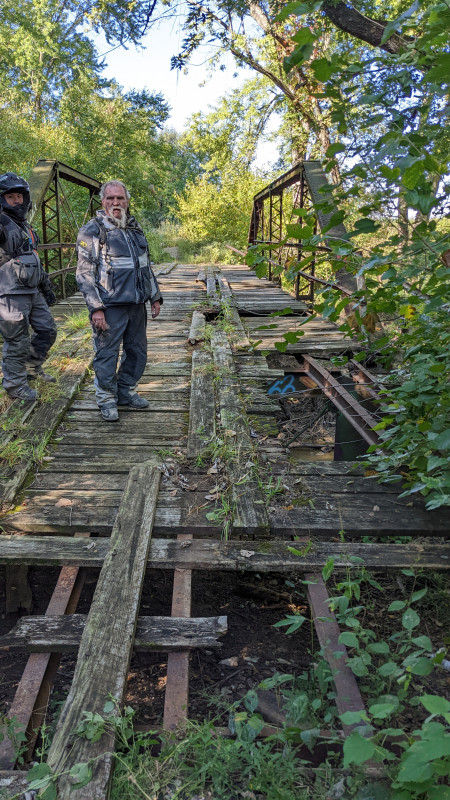 We did stop for photos at the Callaway nuclear plant. Its strange being this close to the plant and hearing the cooling tower do its thing. 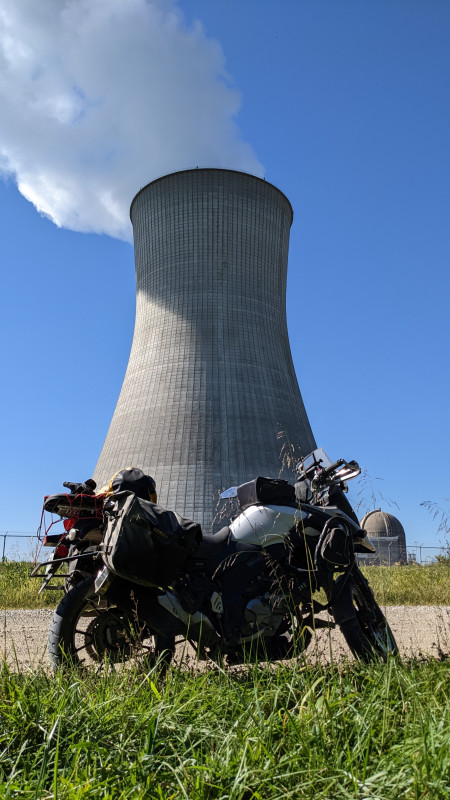 After this, there was one more water crossing that was hard in previous years and no trouble this year. Followed by lots of gravel roads. I was more than happy to be done with the ride at the end of Friday. Brad and I got registered for camping and got our t-shirts and stickers from participating. Then we set up our tents and went into town for a late lunch. The end of the ride is in Mexico Missouri on a family farm. They staked out an acre or so for camping and put a temporary electric fence around it to keep it clear of cow poop. I learned while setting up my tent that the electric fence was still active. My tent pole touched the wire and I got a good shock. I’m embarrassed to say that it took me two tries to figure it out.

Brad was contemplating having a family member come pick him up so he didn’t have to ride his bike back home on the highway. I said that it didn’t hurt my feelings, I would be fine camping alone. I was looking forward to the farm cooked dinner and breakfast the next day.

Unfortunately, my plans didn’t turn out that way. I received a call that my dad had taken a turn for the worse and it might be best to come see him in the hospital in case he didn’t make it. So I packed up my tent and put all of my gear on and headed out of the event.  Dad pulled through and is fine, but that is a tale for another time…

My map for this trip 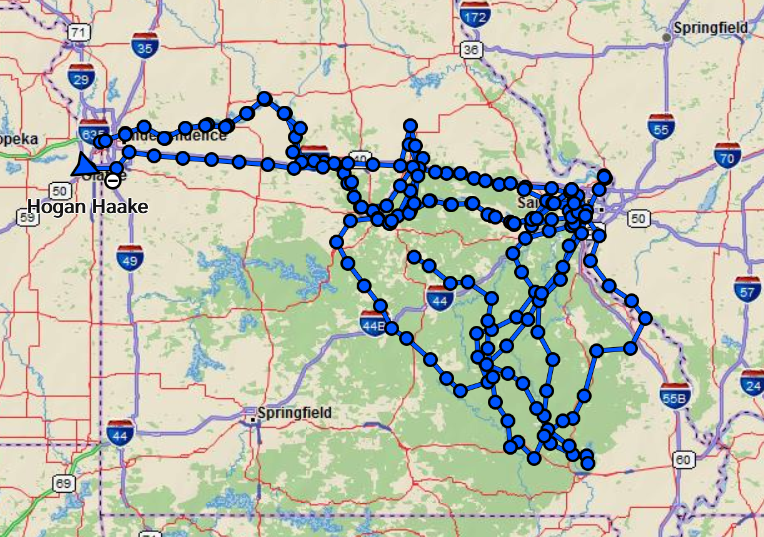 Short video of the fun.