Hogan Haake and Jo Newbold are participating in Mixed Tandem for the MR340 race this year. They start at 8 am Tuesday August 12th, 2014. They are listed as boat #0306, team “Donut & Maple Syrup”. The team name comes from their respective nutrition needs. Hogan prefers good old fashioned junk food, but always donuts for breakfast! Jo on the other hand focuses on whole body health. She plans to go downriver on a mix of water, lemon juice, cayenne pepper, and Maple Syrup.

In order to have everything they need for the race, their faithful ground crew of Danelle Haake (Hogan’s wife) will follow them along the river in the van, meeting them at each checkpoint. Without this support, the race would be significantly more difficult.

Spot Tracker:  If you want to follow Donut & Maple Syrup, check out our Spot Tracker page which is updated every 10 minutes. You can also check out the tracker of our friend John.

Race Tracker:  If you want to see the overall field, go to RaceOwl.com.

8/14/14 7:40p – CONGRATS to DONUT & MAPLE SYRUP on a Second Place finish (26th place overall)!!  This was a very impressive finish!  I arrived at the finish line only about 2 minutes before they landed; I had gone home to empty the van and collect the kids from school so we could all be at the finish together.

I am very proud of both of our paddlers.  They helped each other through the difficulties of blisters, fog, and sleep deprivation.  They also helped their fellow racers, encouraging and guiding a few rookie solo paddlers.  And they finished with a huge burst of energy, both on and off the water.  Another great racer named Kevin was only a few seconds behind them; they had been pushing each other to the finish over the last 10 miles.

The past 14 hours or so since the last post have been very busy, and the computer was out of juice, so I couldn’t update… The race has been progressing steadily. We’ve had several cheerleaders at checkpoints along the way, including Karen Westin of the DNR/Stream Team in Jefferson City as well as support boat crew members Jeff Barrow of River Relief and Stream Teamer AJ Fiecht at Hermann.  And I’ve passed along phoned-in messages of support from many others as well.  These have been great for lifting the spirits!

Of all the checkpoints, I spent the most time at Hermann.  It was a lovely place to watch the moon rise last night and to see the fog roll in (although, I’d have been perfectly happy to skip the fog for the benefit of the racers).  I have some nice photos of racers and scenery along the way – I’ll try to post them before I go to bed tonight, but I can’t make any promises!

Thus far, 16 racers have finished and Donut & Maple Syrup are in 26th place when you lump all the divisions.  Our team has passed at least two competitors in their division (mixed tandem) to get third place, though the RaceOwl website has them in second place.  Either they passed the other competitor (possibly sleeping along the banks), or the other team didn’t get the check-in message through yet.  We will find out soon enough!

SEE YOU AT THE FINISH!

8/13/14 10:48p – I’m keeping this brief so I can get some sleep.  Last I heard/saw, the team was paddling their way downstream.  They had yet another quick stop in Jeff City; just long enough for a pit stop.  I think their longest time at a checkpoint has been 18 minutes. They have probably moved into 4th place in their division – one of their competitors still had not left Jeff City an hour after Hogan and Jo had departed.

In other news, the first racers have already completed the race.  Congrats to the winners, Pineapple Express who finished at 9:19 tonight!!

8/13/14 4:00p – Hogan and Jo are in amazing spirits!  They have a few blisters and they accumulated an impressive quantity of wet clothing – which is currently hanging from every hang-able surface of the van to dry in the sun.  Everything needs to be dry and ready for use by the time they catch up with me in Jefferson City; based on Spot Tracker, they are still on target for a 6pm check-in.

Speaking of check-in, I am impressed by the consistency of Donut & Maple Syrup.  They have been within 60 minutes of their target at every checkpoint thus far!  They are hanging in there in 5th for their division and 37th overall.

8/13/14 11:05a – I will be heading shortly to Les Bourgeois Vineyards to see if I can get a couple of photos of the team in action.  They are on track to reach Katfish Katy’s at about 12:30.  I will send them off with fresh fluids and pizza.

8/13/14 8:18a – I have the pleasure of writing this morning from familiar surroundings – St. Louis Bread Co. / Panera.  It’s not one I’ve been to before, but they are really all the same, aren’t they.  Now, on to what you really want to read about…

We are just over 24 hours into the race and Hogan and Jo are going strong.  When they stopped at Glasgow, they were both looking very well.  With the cool weather, they haven’t been drinking nearly as much as in previous years; don’t worry, they are staying hydrated.  They started off with 3-4 gallons of water each and have both been drinking Gatorade as well.

The night was rather chilly, but the fog was not as bad as I expected.  Of course, I’m not on the water where they are.  I just received a text that they both got 90 minutes of sleep on a sandbar. (I think they’ve had more sleep than I have had so far!)  The nap stop was motivated more by the fog than by exhaustion, but I am glad that they were able to get a little rest.

As for rankings, they came into Glasgow as number 38, but there were at least 10 boats still sitting on the ramp as they left.  In fact, 9 folks who arrived before them are still listed as in Glasgow, probably enjoying some much-deserved rest!  In the Mixed Tandem division, they have moved up from 6th place to 5th and they are less than an hour behind the 4th place pair.

We have several friends in the race as well.  John (Spot Tracker link above) is solo and has been keeping up with Hogan and Jo.  They came into Glasgow together.  Our friend (and fellow Avery parent) Stephan and his friend Anthony are first-timers in the race and left Waverly about 9:00 last night.  We are also watching a team of first-timers called H2Olden’ On who left Waverly soon after at 9:30; they are racing in “First Draft,” the canoe that Hogan and I built three years ago.  I’m eager to see the changes they’ve made!

Apparently our Spot Tracker is on the fritz again.  When they texted at 7:20, they were at river mile 150…

8/13/14 1:35a – Donut and Maple Syrup have been making good time.  They have moved up to 41st place!  With many paddlers stopping for the night (or at least a portion of the night), I think they will move up even more by the time they get to Glasgow.  I had intended to be sleeping myself at this point, but I only now found a place where I can get an internet connection.  It isn’t a big deal if I can’t write to you all, but I need the Spot Tracker so I know when to expect the team to come in.

One big reason why the Spot Tracker is so useful is that we expect a lot of fog in the morning.  We could see it rising off the water already as they were leaving Miami at 10:50.  If they decide to stop due to excessive fog, the Spot Tracker will be very helpful so I know where they are and when to watch for them. Well, G’night all.  Paddle safely!!

8/12/14 1:03p –  There was some sort of issue with the Spot Tracker for the first two hours of the race, but it appears to be working properly now. Based on their progress so far, I anticipate “Donut & Maple Syrup” will pass the first checkpoint at Lexington at around 2:45p.  They will not stop for supplies at this point, but will send a quick text to the race organizers and then continue on to Waverly.

8/12/14 8:09a – The race has begun!  Hogan and Jo are in the water right now with about 280 other boats at Kaw Point in Kansas City.  I can’t speak for them, but I am excited that the race is finally underway; with the postponement, we have had an extra month of anticipation.  The Spot Tracker is on, so you can click on the link above to see their progress over the next couple of days.

7/8/14 10:00a – Yesterday at noon, we got the phone call; the race has been postponed until August 12-15.  This raised many questions about time off and availability and transportation.  We haven’t made final decisions, but we are both back at work today and are planning to reschedule our family vacation so Hogan and Jo can participate in the race.

On the plus side, we got to hang out with a fellow river lover, AJ.  He was in Columbia, MO, slated to be on one of the support boats.  He needed a ride back to St. Louis and we were able to provide.

Check back in a month for further updates!

7/6/14 12:15p – Hogan and crew have been in KC for a couple of days making final preparations.  Jo will arrive later today.  We are all getting excited and are eager to get the show on the road!

At the start…  (Photo tweeted by @Cody_B_Jones) 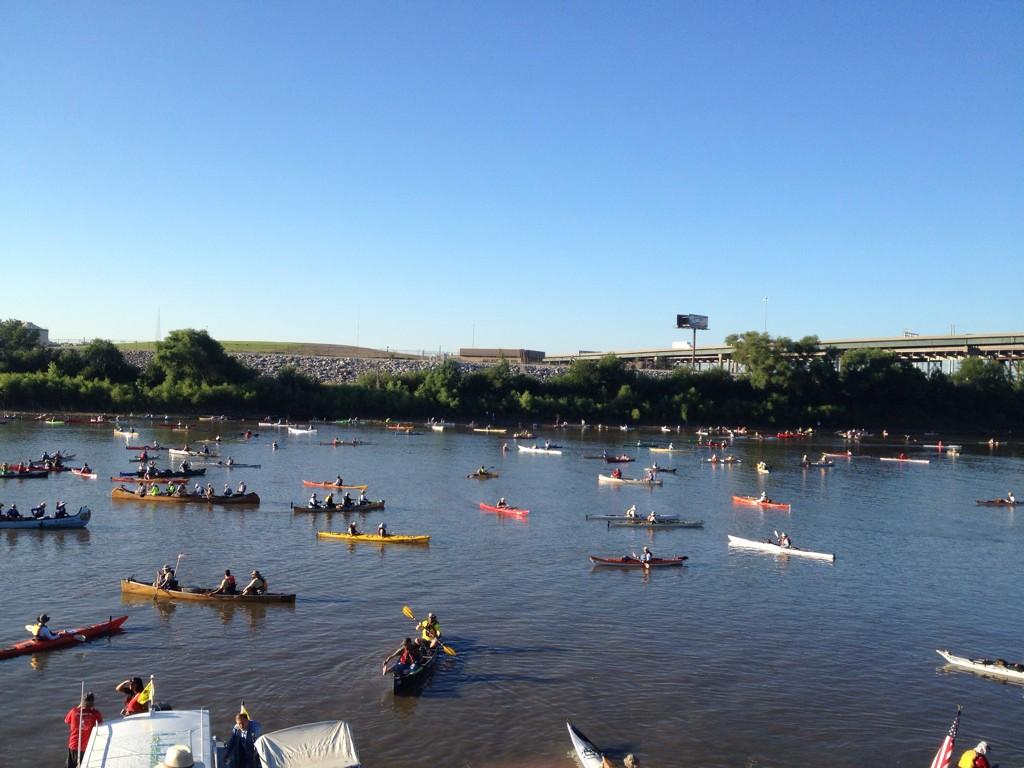 The view from the A-Frame at Les Bourgeois is amazing.  They also have excellent wine (Riverboat Red is our favorite) and some lovely patio food.  There were three boats ahead of Hogan and Jo while I waited, and I was able to get all three in one shot. 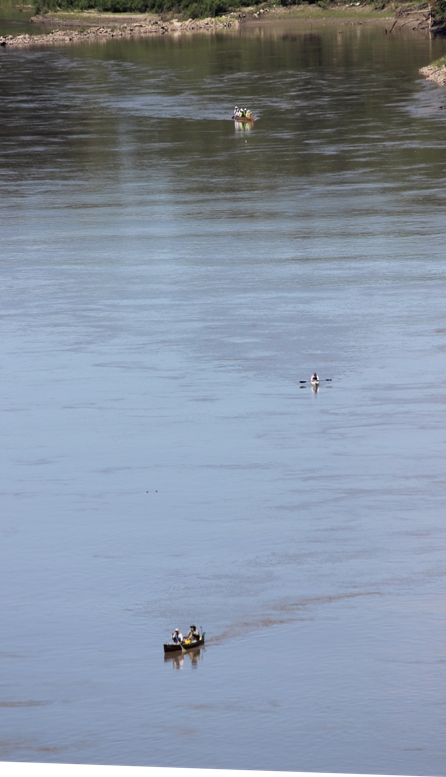 Junebug (the boat) belongs to a friend of ours, Mike Clark (owner and operator of Big Muddy Adventures).  He sponsored this group of ladies for the “Ladies and Clark” team; very clever name and a great group to draft, according to Hogan!  The first shot of the group was from Les Bourgeois, the second was at Jefferson City. 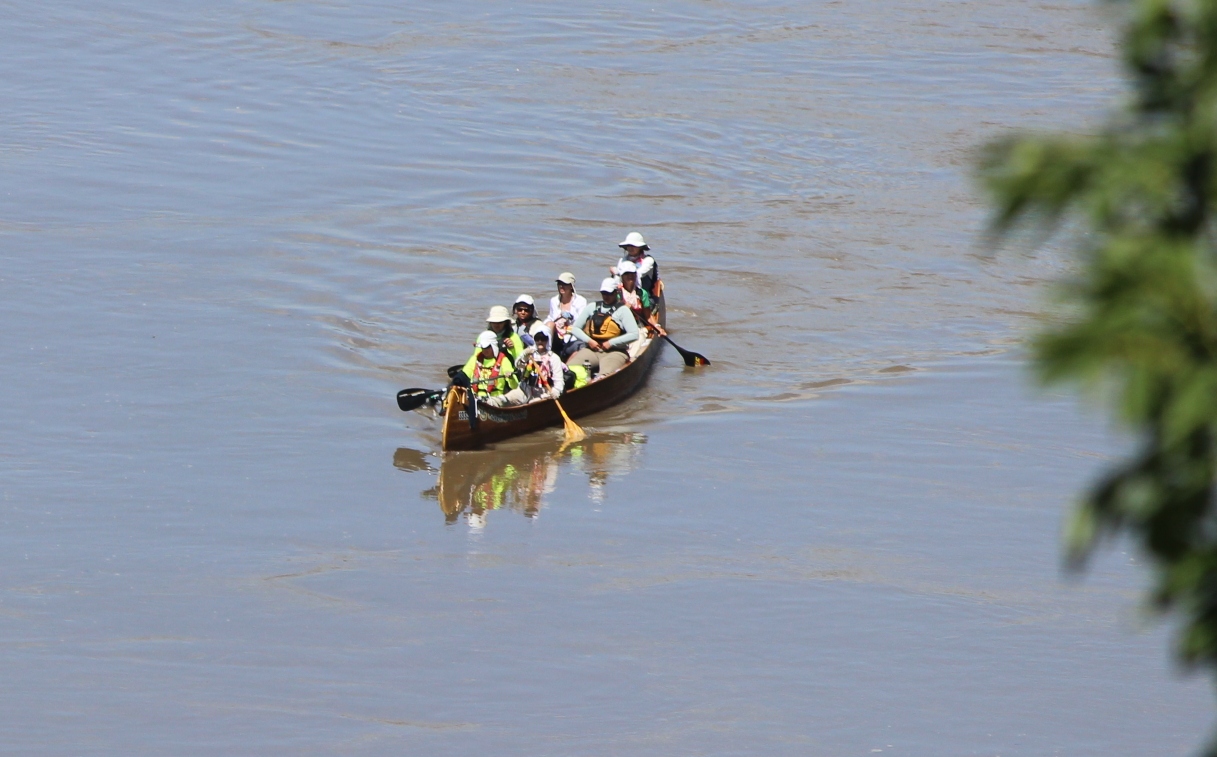 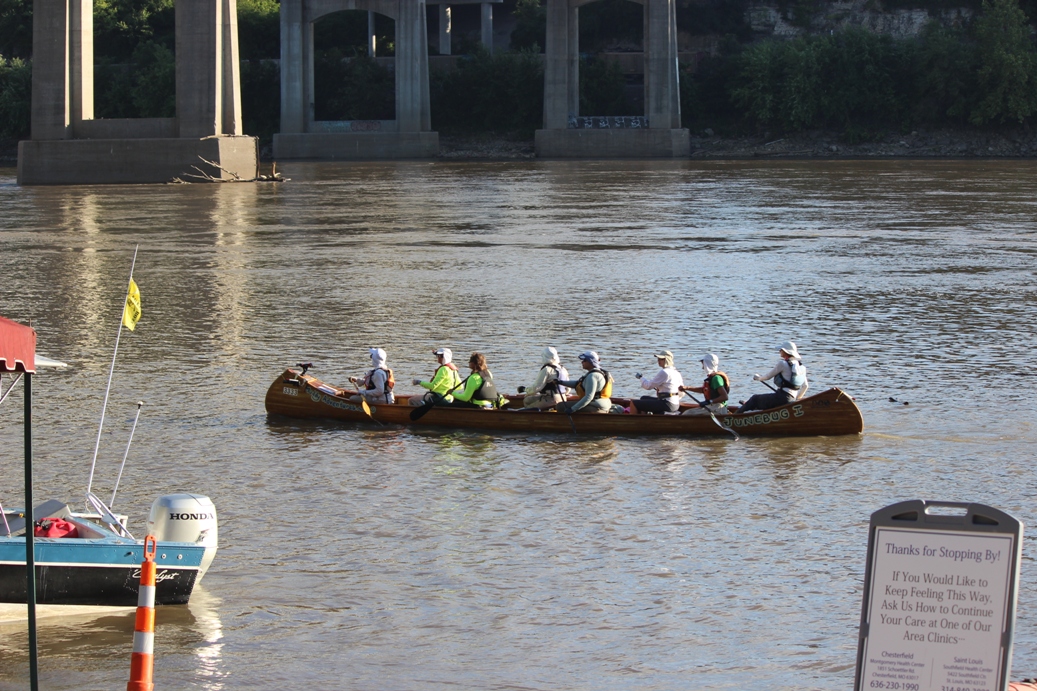 The main competition for “Ladies and Clark” was the “Penny Per Gallon” team – all employees of Missouri American Water.

I think my longest stop was at Hermann.  There were many lovely views there.  Do you agree? 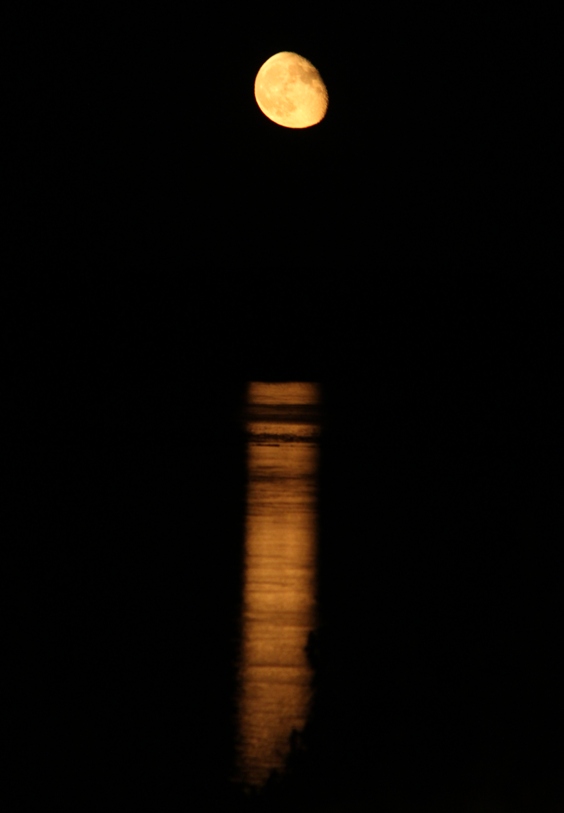 Bridge lights on the water: 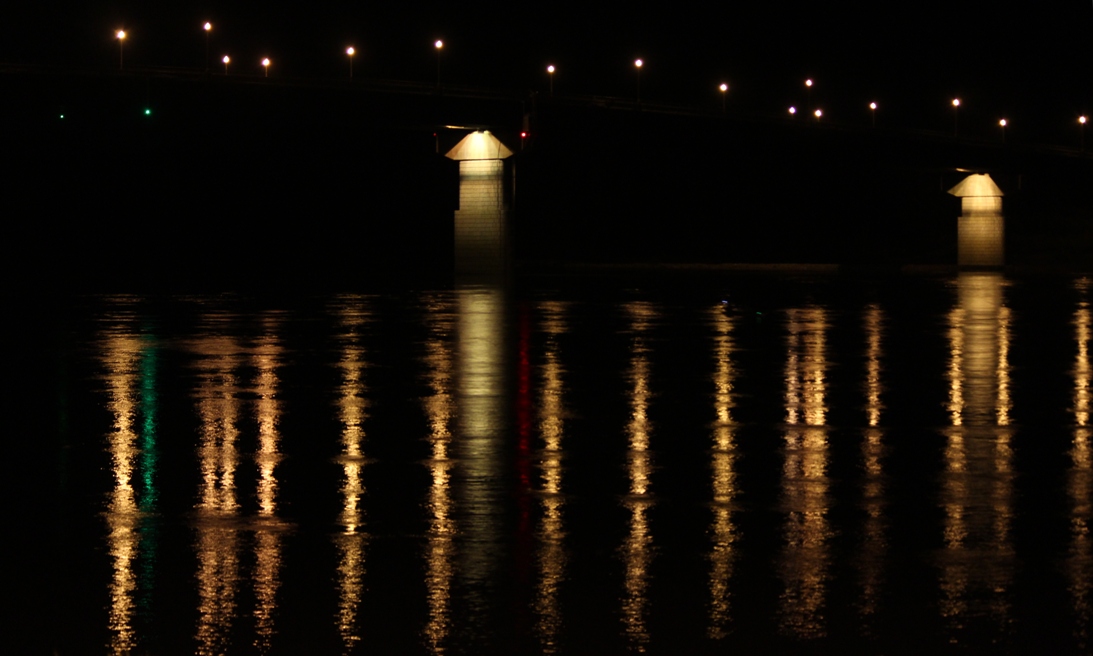 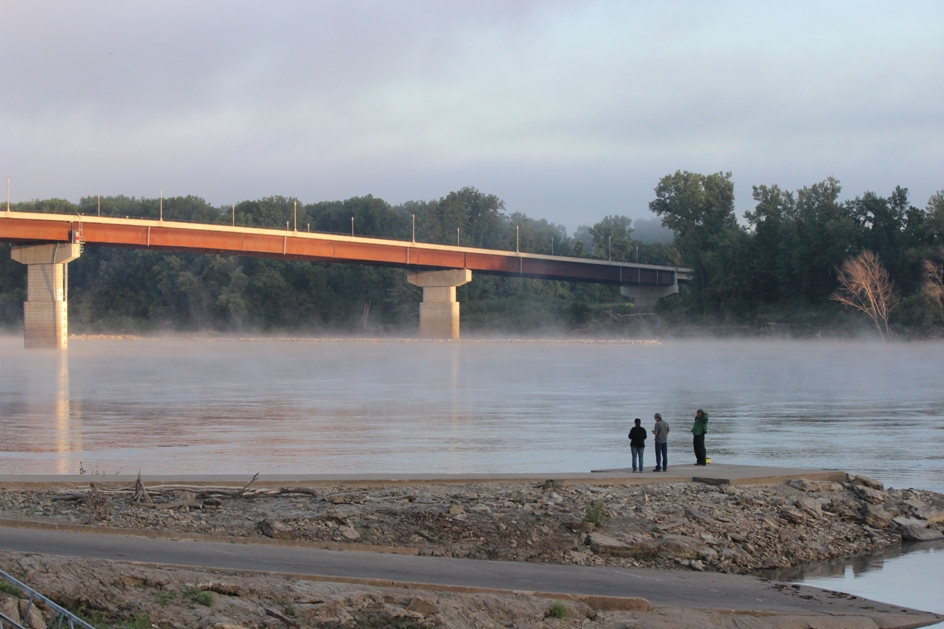 A wall of fog descended from the hills.

A fire warmed the early morning for ground crews waiting for their racers to arrive in Hermann. 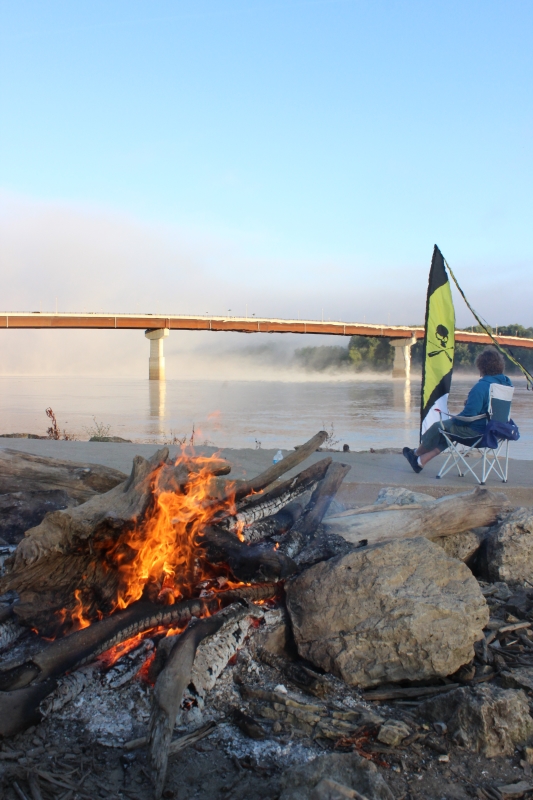 I got a few plant/wildlife photos while I waited.  This was my favorite! 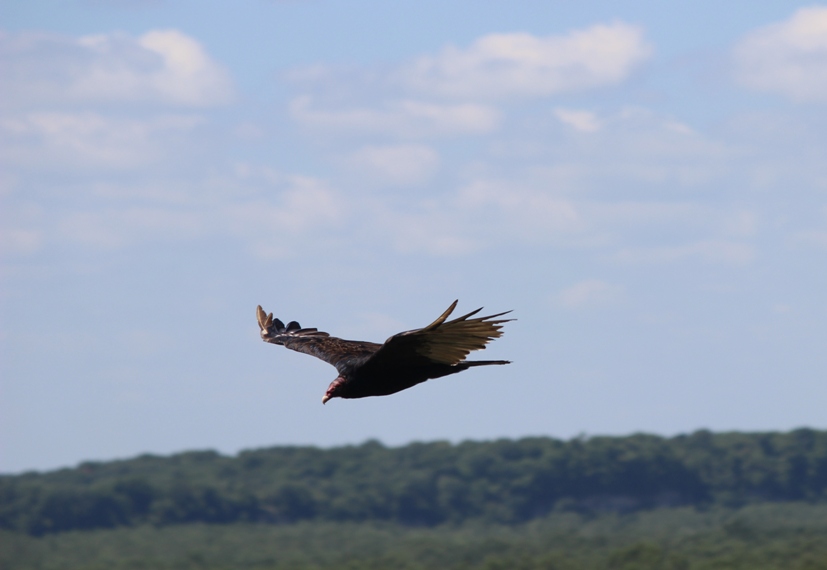 John Jones is a friend and a first time MR340 racer.  He paddled like a pro, finishing only about 40 minutes behind Hogan and Jo. 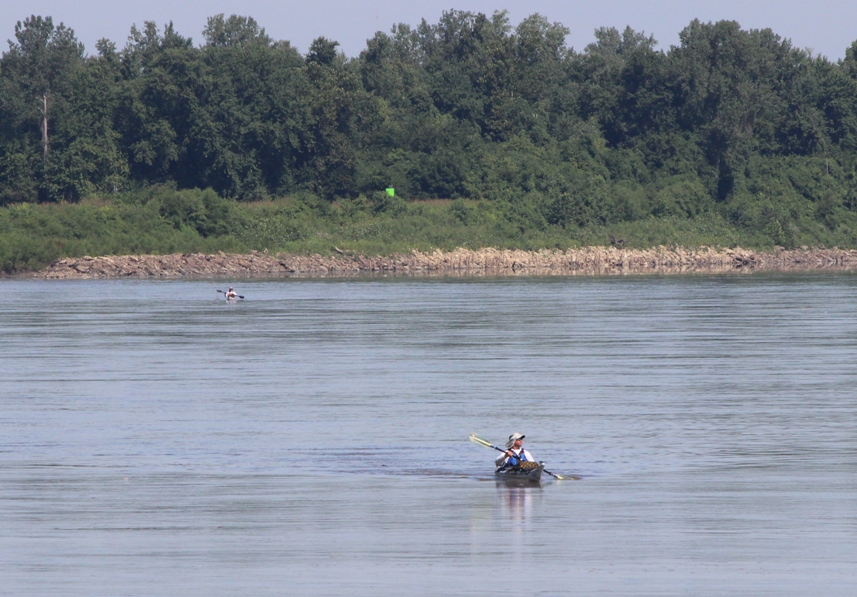 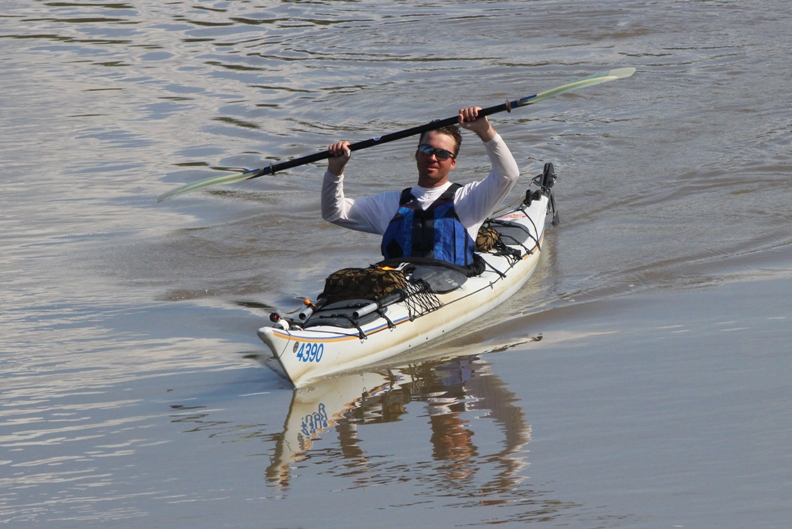 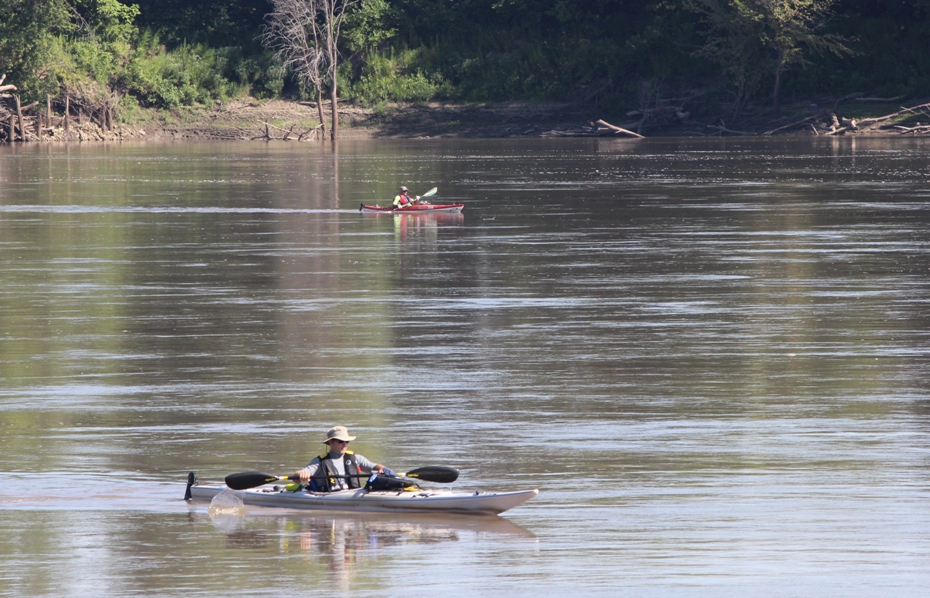 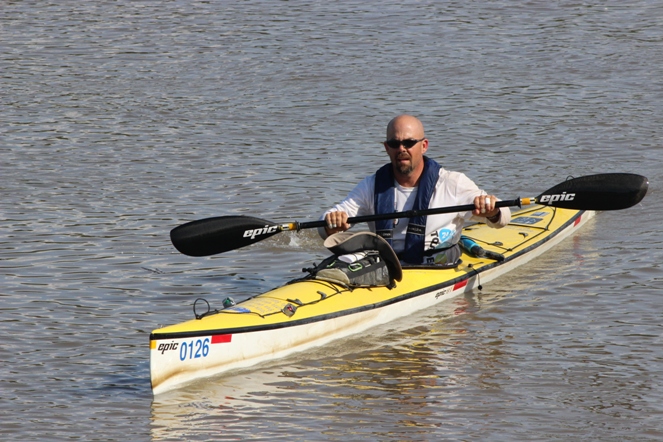 Oh, yeah, I did manage to get a couple of decent photos of TEAM DONUT AND MAPLE SYRUP!! 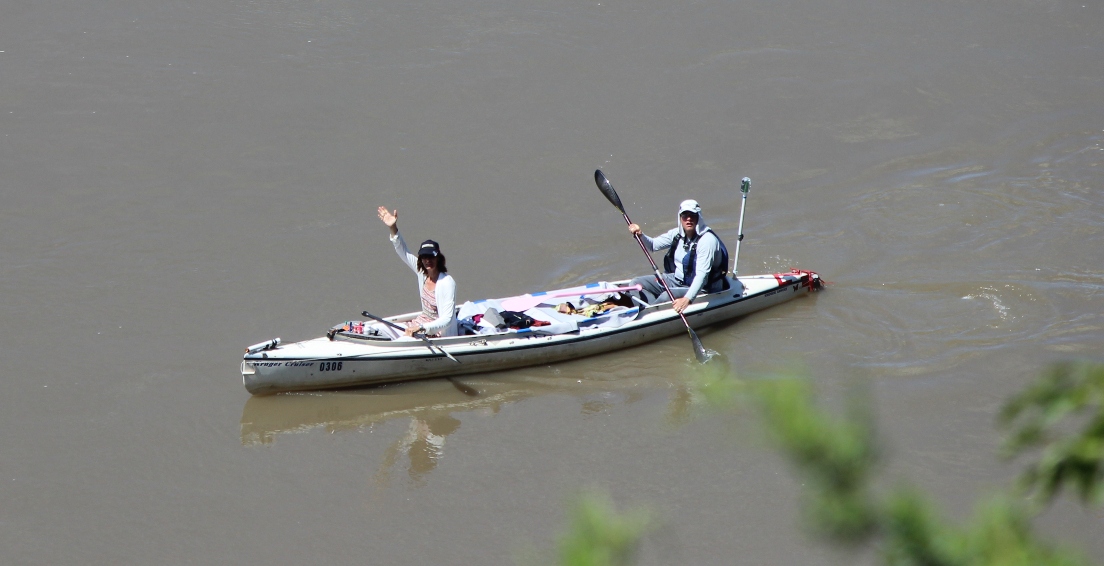 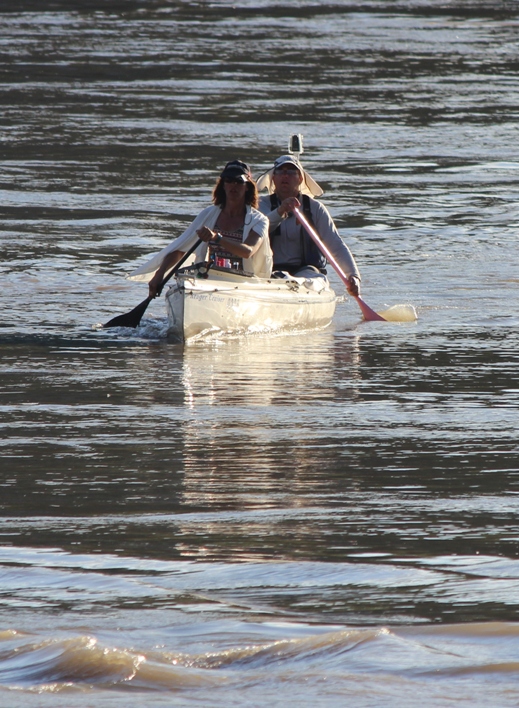 With ground support (Thanks Karen W. for taking over with the camera!): 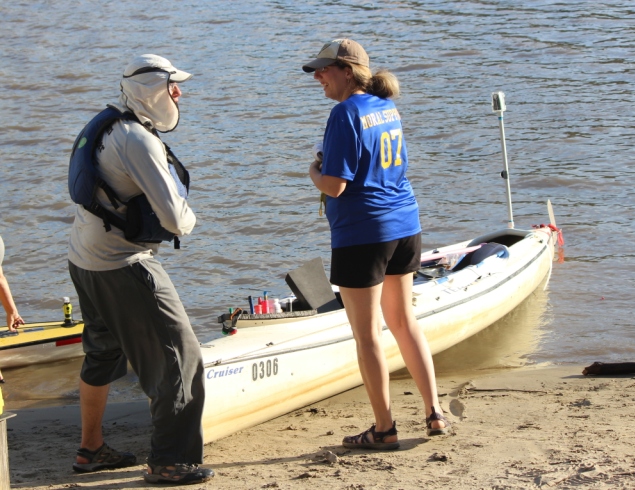 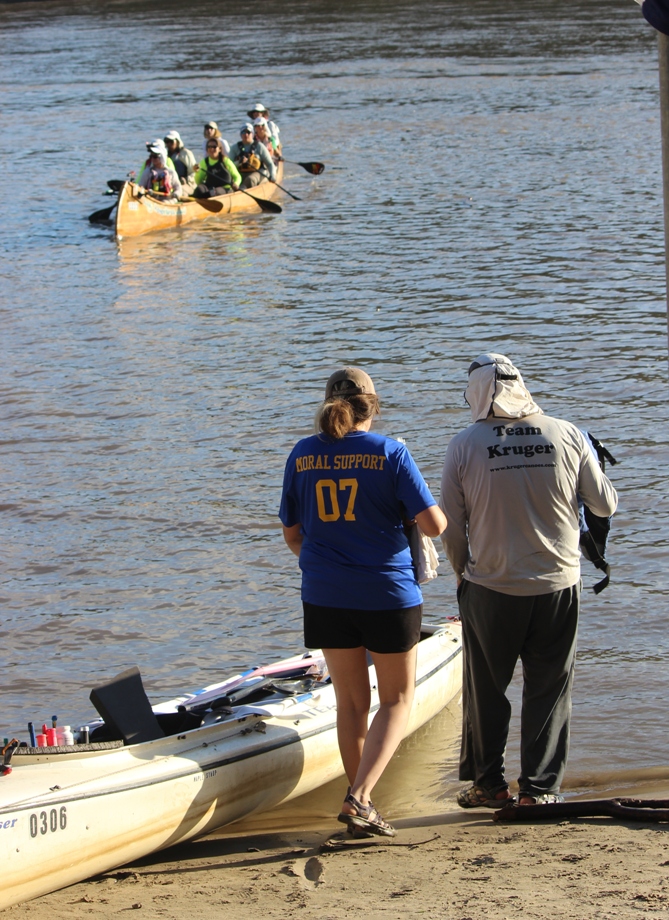 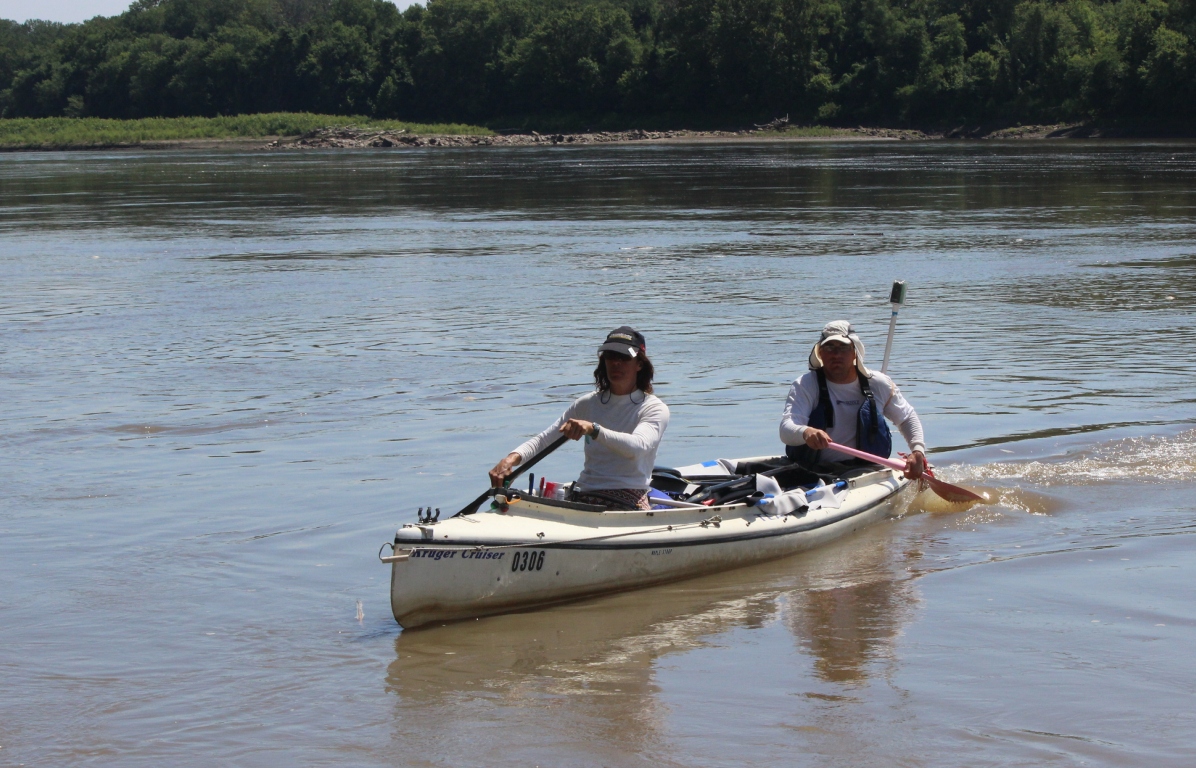 Would you paddle 311 miles for a Klondike bar?  This pair did! (Though, Jo doesn’t look nearly as happy about it!) 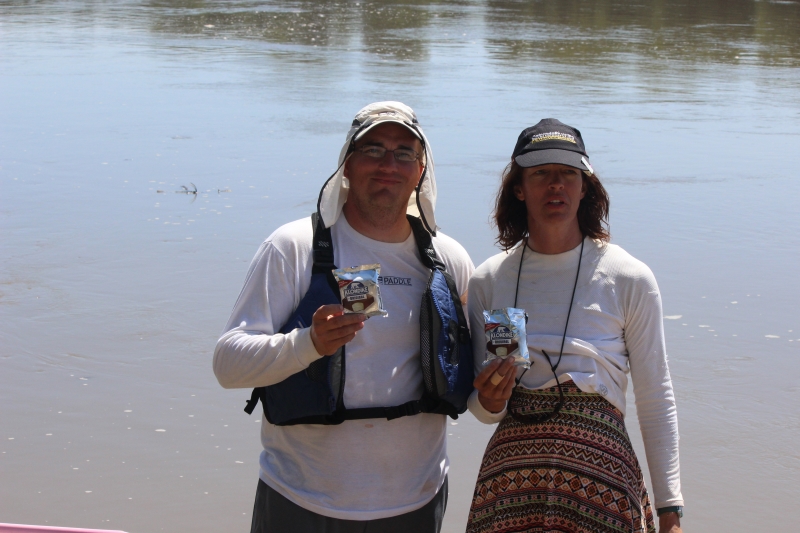 Paddling hard for the finish! 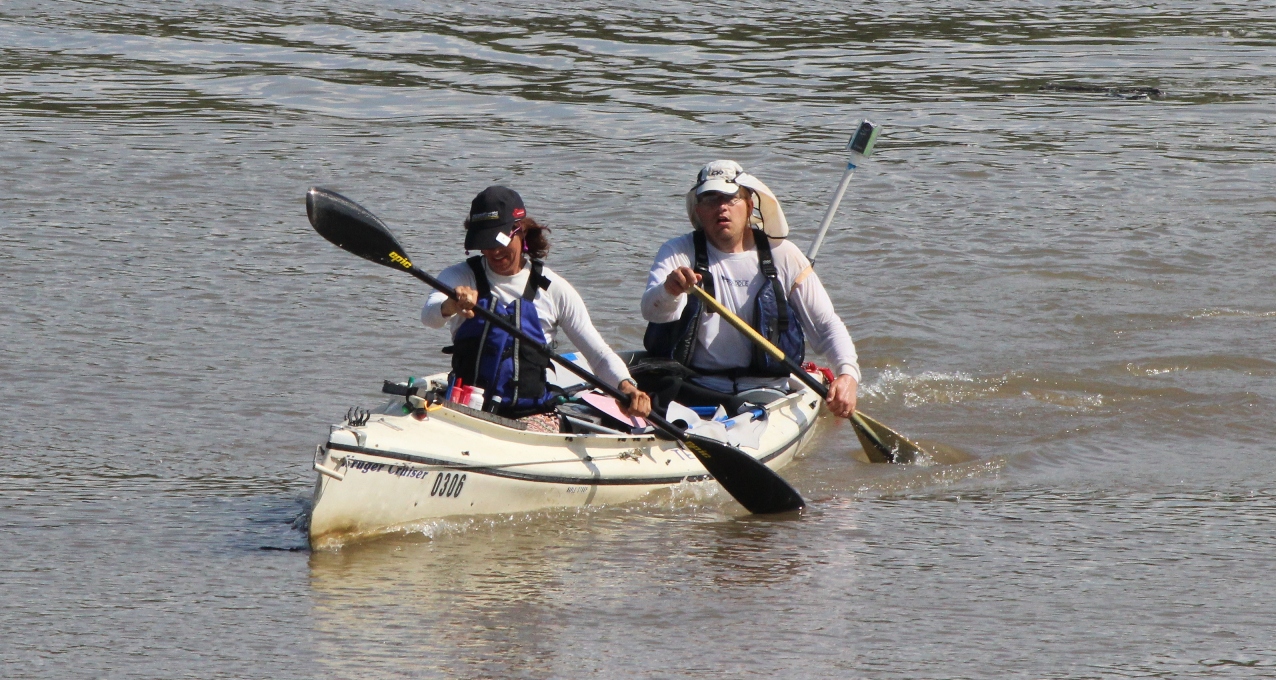 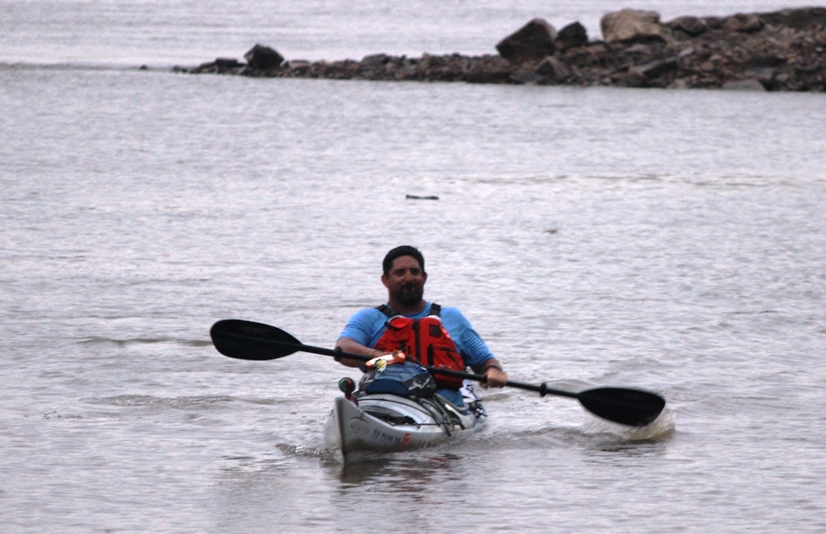 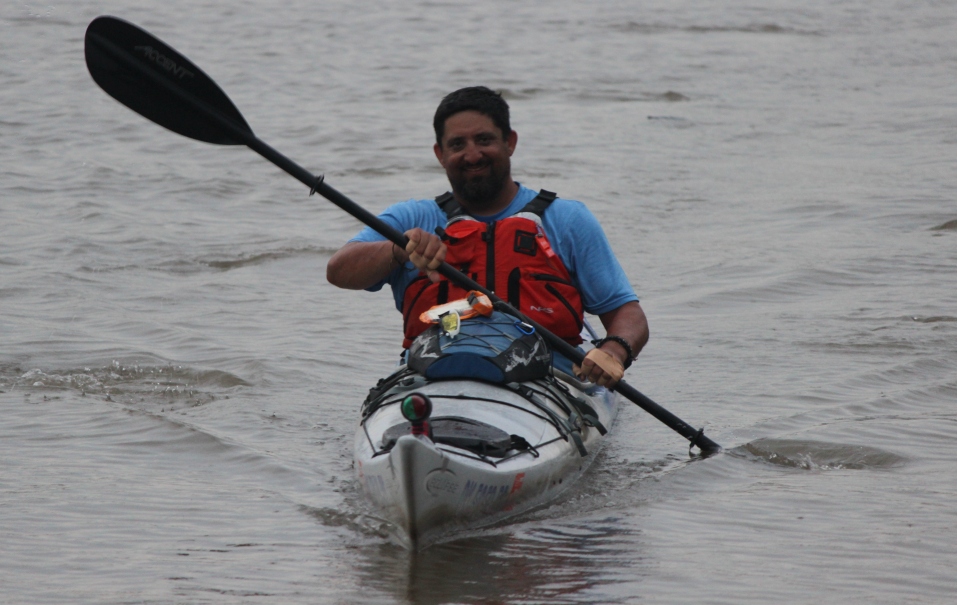