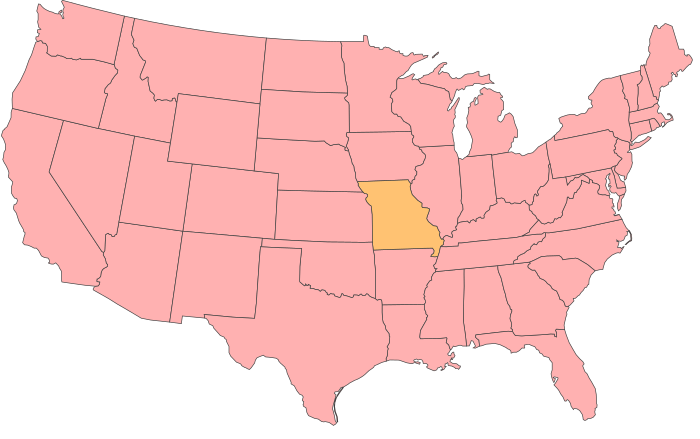 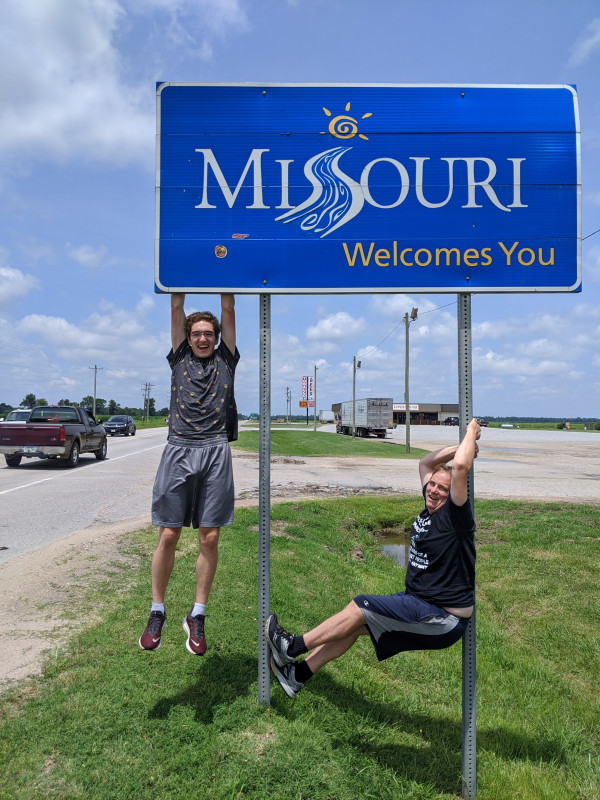 Today is the day that we officially complete our 48 state unicycle journey. Its hard to believe its over. I’ve seen our growth as we get more comfortable with visiting each state and documenting our journey together. The smiles in our faces of the state photo above tells of how we feel about the whole trip.

Many people have commented that it is strange that Missouri is our last state as its our home state and easy to complete. This was actually one of the simplest decisions of the whole project for me. I wanted our home state to be our last state. It was an easy way to mark the completion of our journey. I wanted to be surrounded by friends and family when the trip was done! I put out an invitation about a month prior online for anybody to join us on our last ride.

See the invite and the map below. 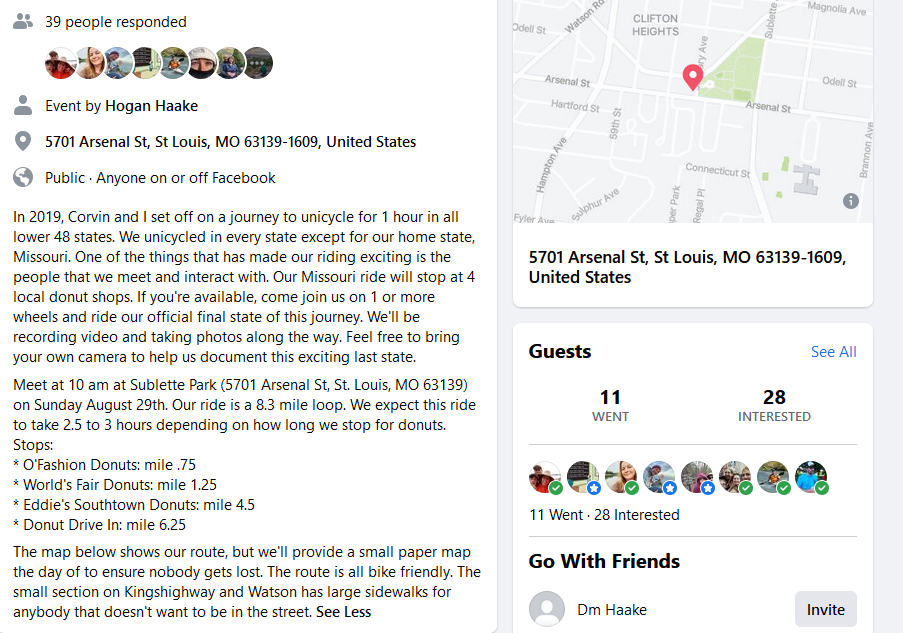 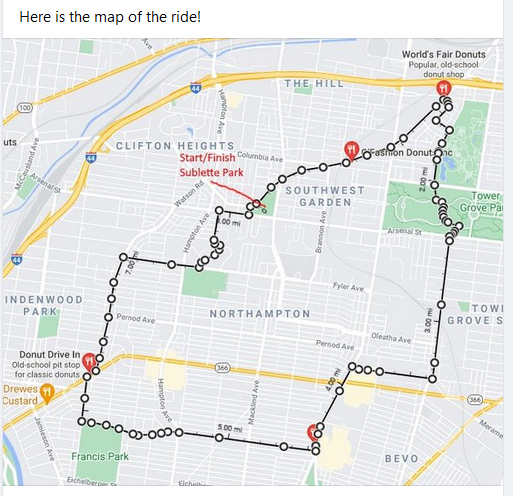 The day of the ride I was totally ready and exited to see what the day would bring. I  like being early. Danelle, Corvin, and I arrived at Sublette park 1 hour before the ride was officially scheduled to start. I wanted to ensure that if any other early people showed up, they didn’t leave thinking they had the wrong day. As the time drew down to 30 minutes to go, only Danelle, Corvin, and I were there at the park. Like I always do with my nervous energy, I started to pace around. I walked around the fountain multiple times and over to edges looking for people. It was probably ten minutes before the official start that participants started showing up. I don’t remember who showed up first, but I was relieved that somebody else was interested in our trip.

People standing around the fountain. 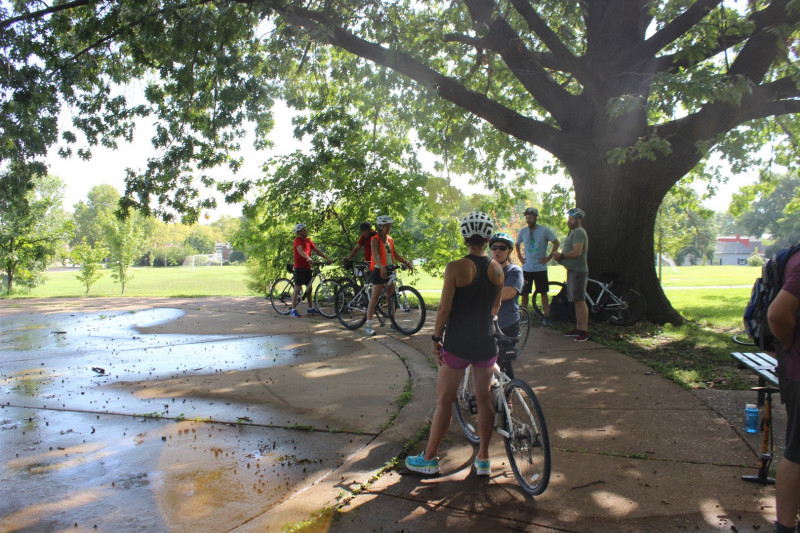 The group of us before setting off.

Several of the Sunset Race crew. 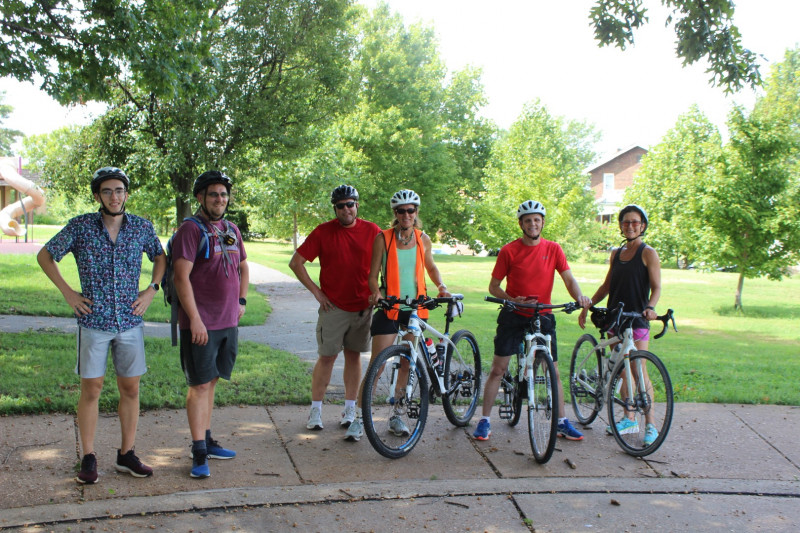 Joe Fingerhut (guy in blue on the unicycle) trying out a 29″ unicycle for the first time. His two kids and wife on the left also ride unicycles and came out to support us. 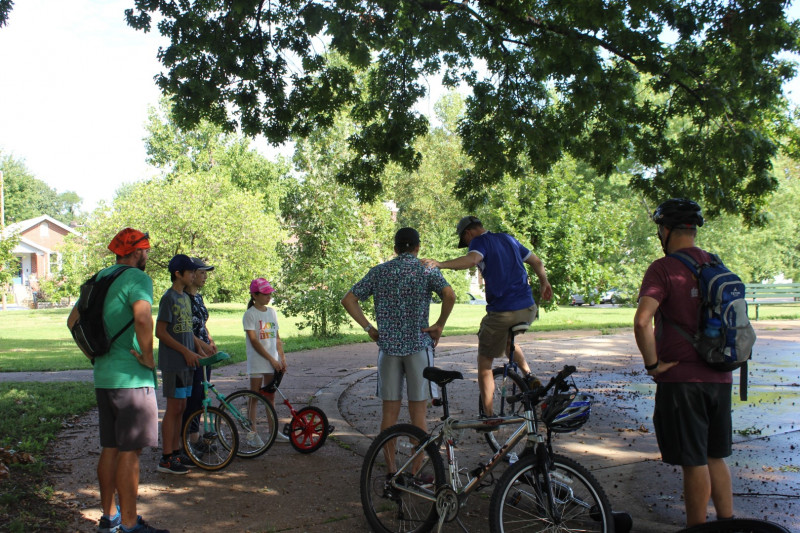 While they didn’t have a lot of time, the Niemeyer family came out so Mason could ride a few miles with us! Mason is to the left of the pole. 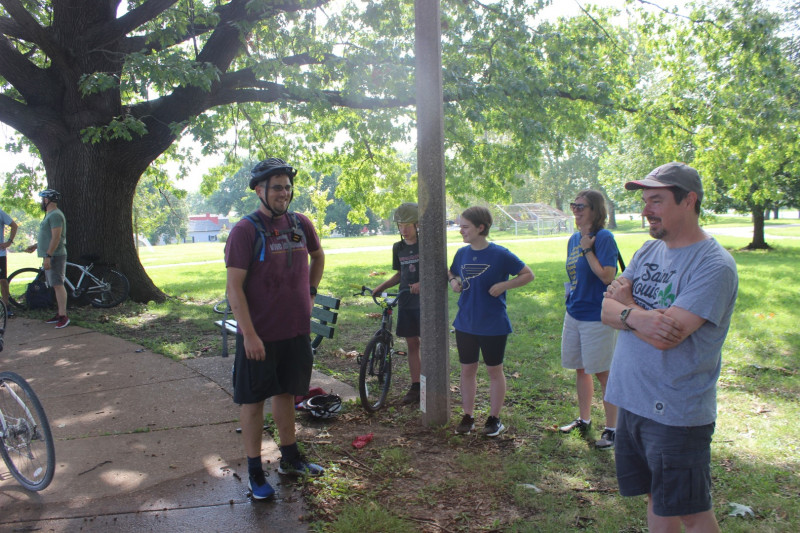 I told my brother in law the wrong starting park, but he came out with my nephew Mark to see us off. 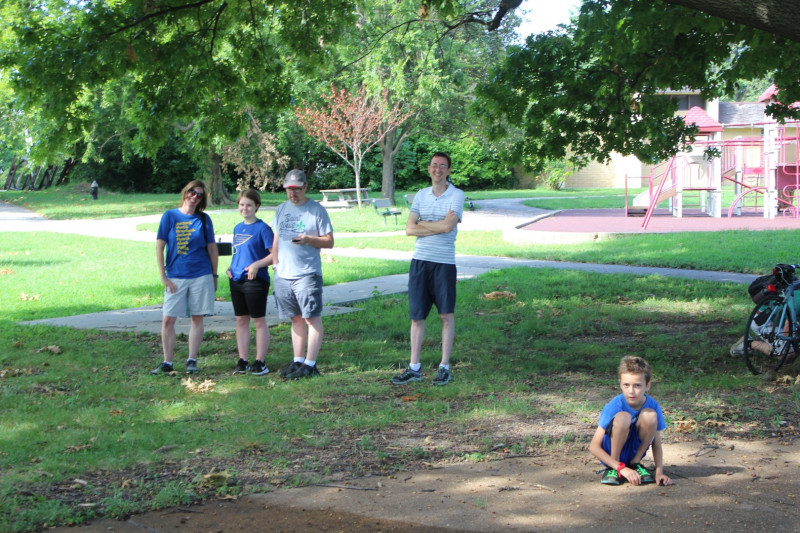 With a cast of characters from paddling, plus family and friends that are family, were now ready to set off on our scheduled adventure. Okay, maybe since people showed up later (or I didn’t describe the event well), we didn’t leave the park until about thirty minutes after I thought we would. No matter, we were off making memories!

No trip goes exactly as planned nor should it. If you already know what is going to happen, what is the point of going on the trip in the first place. I had a general idea, but figured we would play things out as they presented it. This meant realizing that the first planned donut stop was permanently closed. O’Fashion Donuts is no longer a possible stop. It worked out okay as the next planned donut stop, World’s Fair Donuts, was open and not that much farther down the road.

When we arrived, Danelle was already there passing out donuts to participants. There wasn’t much of a selection as we were already later in the day and most were sold out.

One interesting and different facet of this trip was that I didn’t spend much time with Corvin. He and I have been together for the last 47 states riding nearly side by side every rotation of the tire. Due to the size of the group, we split up. Part of this was to get good video and another to do our best to herd everybody together. We had lots of different skill levels on this ride. After the donut stop the group spread out a bit.  Again with the skill level, Joe and his son Hiro were riding 20″ unicycles. They had never really seen larger wheels before meeting us. A 20″ wheel unicycle does not go very fast. Their cruising speed is about 50% of ours on larger wheels. They are also not distance riders which made this much harder for them.

Confusion and delay caught up with us as we entered Tower Grove Park. Mason was supposed to be picked up on the north side, but continued riding to the south side. Some phone calls and Kelly kindly walking south got it figured out and Mason was reunited with mom to get on with their other plans for the day. Also during this time, Joe’s crank arm on his 20″ unicycle was coming off. I offered for Joe to use one of my unicycles that was in our support vehicle. Joe gladly accepted the offer. At the support vehicle, it was unicycle madness. In order to continue and make the trip easier, Joe took Corvin’s 29″ unicycle. Corvin then got the 36″ unicycle out of our car and started riding it. I kept mine and we were off.

Things were going okay, but Steve and Jackie were slowing down.  I stayed close to Nathan to make sure he was watched over and we continued on. Somewhere after we crossed Kingshighway, I met up with Corvin who was having issues riding the 36″ unicycle. We got a photo together, then switched.

The sign made Corvin laugh cause its not us, but he wanted the photo. 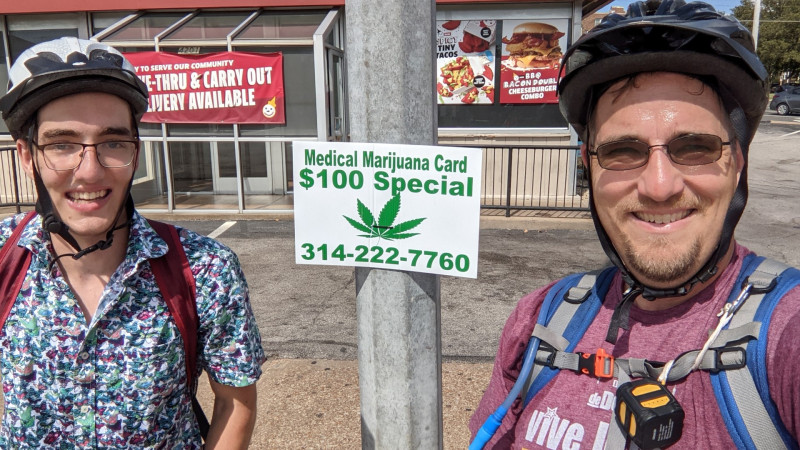 I was now on the 36″ unicycle and Corvin rode my 32″ while Joe continued on Corvin’s 29″ wheel. All this time, Hiro continued on his 20″ wheel without complaint! 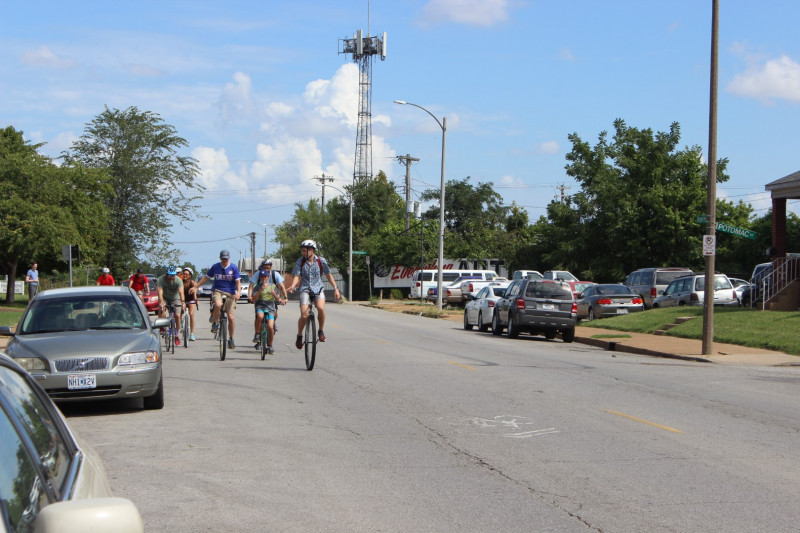 When we arrived at Eddie’s Southtown Donuts, things again got interesting. There in the parking lot, Nathan nearly collapsed. I realized he had over exerted himself. I put him in the front seat of the car with the AC cranked and got him extra water. Jackie was done riding and needed to be picked up. I sent Danelle with the car and Nathan to pick up Jackie and her bike. Steve said he would catch up with us at the next donut stop.

At this point Joe and Hiro had enough and were picked up by Joe’s wife. Sorry I don’t remember his wife or daughter’s names, but they also rode unicycles at the start, making this day even better for us!!! Danelle drove Jackie and Nathan to their car so they could pick up Steve and the rest of the group were going to continue. This was a huge break for me. The 36″ wheel (I realized later) was under inflated making it much harder to ride. I was able to continue because Joe returned Corvin’s 29″ wheel to him and I got to ride my trusty 32″ wheel again. All was back to normal.

At the last donut stop, Donut Drive In, they were closed for the day. The group decided to back track a bit and ride over to Ted Drew’s for some frozen custard. The day turned out to be super hot with high humidity. Having cold custard was a treat before we made our final push back to Sublette park. Right before leaving, Danelle and Jackie pulled up. We wanted to hang out with them, but needed to get moving. Several riders that lived in the surrounding areas peeled off to go home at this point. I can’t blame them. We were down to 6 riders. As we entered the park for the finish, we were met by Emily Woodbury of Saint Louis NPR taking photographs of us. 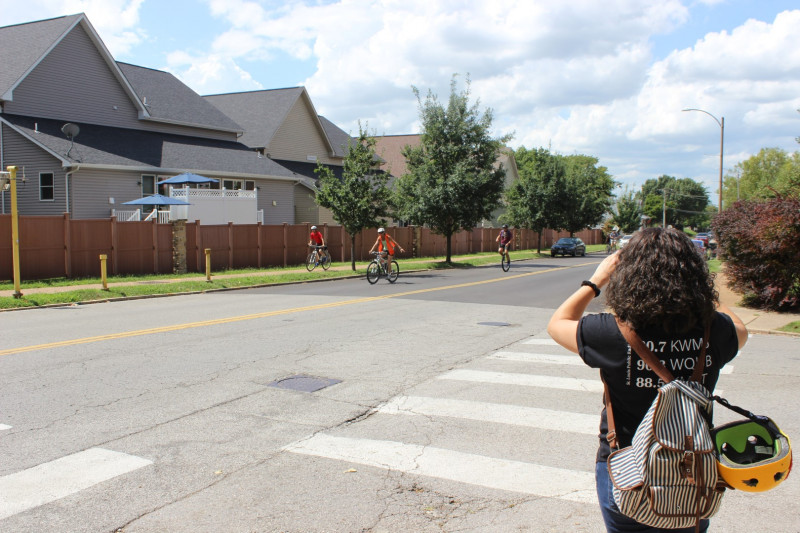 We said a quick goodbye to the other 4 riders and began the last phase of riding for the day. Danelle had contacted our local NPR station earlier in the week and they wanted to come out and interview us about the ride. Then they would follow up with an on the air interview the next week. NPR Interview. We had a fantastic time talking with Emily about our project. It is strange getting interviewed as she shoved the microphone right to my mouth after asking a question. 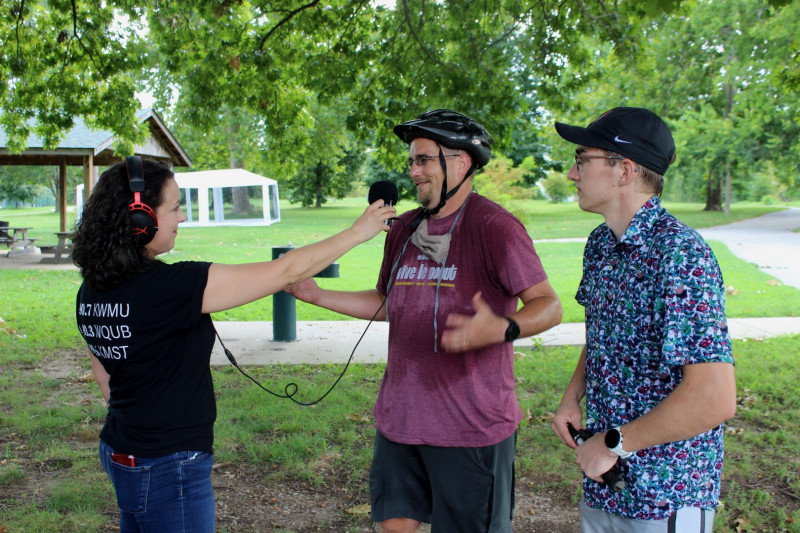 We talked with Emily for about an hour describing our trip and talking about the mechanics of a unicycle. We even got Emily to try out a unicycle and got her on film.

Still over a month after the trip has been completed, its hard to believe that we did it. I’ll cherish every moment I spent with Corvin and all the support from friends and family along the way. Of course this isn’t the end. I’m planning to release videos next year of each state that we rode in. Stay tuned! 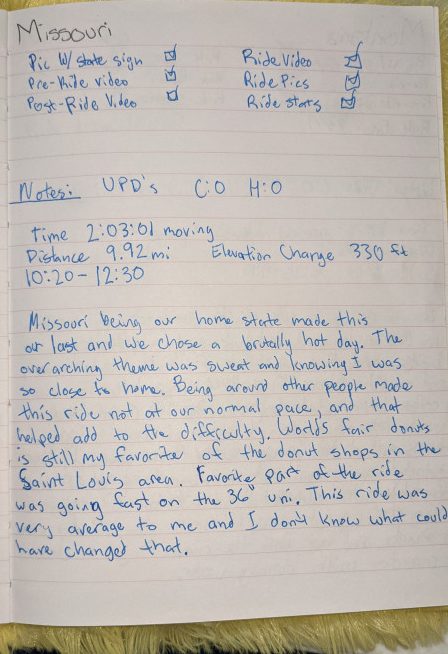