One of my long time friends and co-trouble maker, JoJo sent me a text message asking me to call Dale. He wanted to take my flying. I was already out with friends for the morning, so after talking with Dale, it didn’t sound like we were going to meet up and fly. We agreed that it would work out some day.

While I was eating lunch, I got a phone call from Dale that he was still available if I wanted to meet him. So I left some of the best BBQ in St. Louis and headed straight to the airport to meet Dale. I was earlier than I anticipated and waited for him, looking out at planes taking off and landing. When Dale got there, I hopped into his car and we went to his hanger.

In the hangar sat a 1946 Piper J-3 Cub. The plane looked like it just came out of the factory. It was bright yellow and very clean. I was sure that Dale was proud of his plane and took excellent care of it.

I stood around not sure how I could be help while Dale opened up the hangar. He proceeded to lift the tail of the plane and move it out double checking with me that the plane would clear the hangar door. Once the plane was out, he tethered it to his car. It turns out that the plane doesn’t have brakes and once started can roll forward. 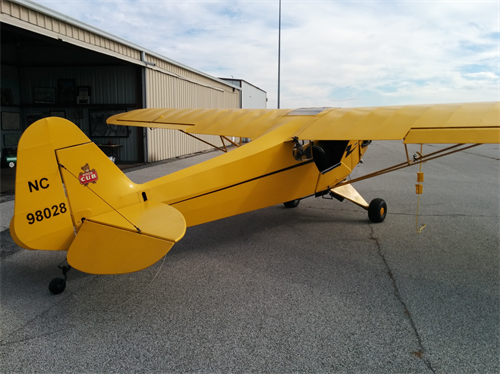 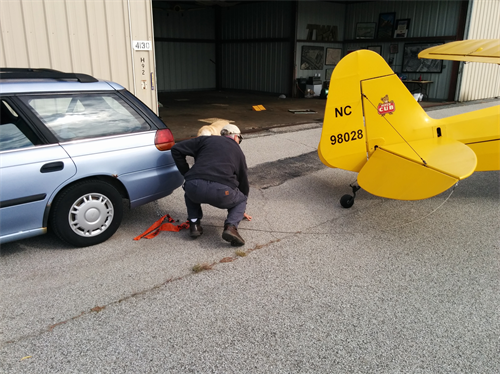 He did a walk around inspection of the plane with me asking questions I’m sure he has heard many times before from non-pilots. Once everything was in place, I grabbed one more photo of the plane before getting in. 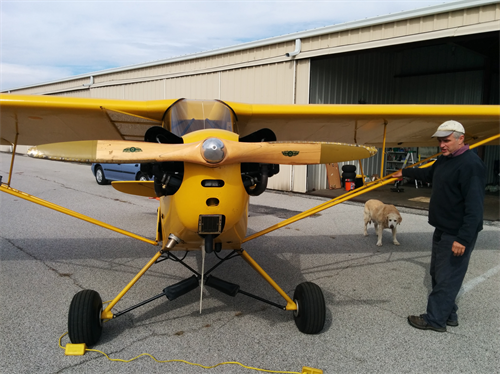 I now made the embarrassing act of climbing into the plane. People were generally smaller in the 1940’s and that makes for an awkward entrance into the plane. There isn’t much to step on to get into the plane and its pointing up towards the sky. After some difficult maneuvering, I got myself into the front seat and crossed my legs to keep them out of the way of the rudder pedals.

The Piper Cub is a very simple plane. There are no electronics on it. All instruments are mechanical. This also means that there is no starter. Once I was seated, Dale had to manually spin the propeller to start it. This consisted of turning it with the key off to prime it. Then turning the key on and giving it several hard spins before it started. It is dangerous because once it starts there is no room for error as the propeller starts spinning faster than a person can see. 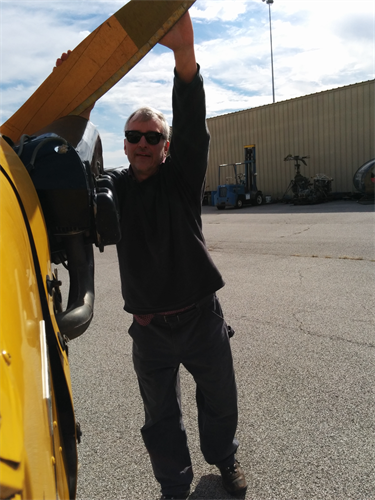 With the plane started, Dale unhooked it from the car and hopped in to the pilot’s seat. We both put on our headsets connected to a very expensive portable aviation radio. A few radio checks and then a call to the tower with airline jargon and we were moving to the runway.

[Notes from the youtube video]
At the 18:30 mark, you can see the confluence of the Meramec river with the Mississippi river. Check out the difference of color as the two meet each other.

At 1:03:50 you’ll see us at the final approach for the landing. Dale will do a technique to slow the plane down and drop altitude going slightly sideways. It was a surprise as I thought we were too high for the runway and quite fun!

After we landed, Dale took the plane to the refueling place where they came out with a truck to refill the tank. Motion sickness was getting the best of me by the end of the flight, so I opted to walk back to the hangar and wait. There I played with “Big Yellow Dog” who was faithfully waiting for us to get back from the flight.

A special thanks to Dale and JoJo for helping me have a weekend I’ll never forget!